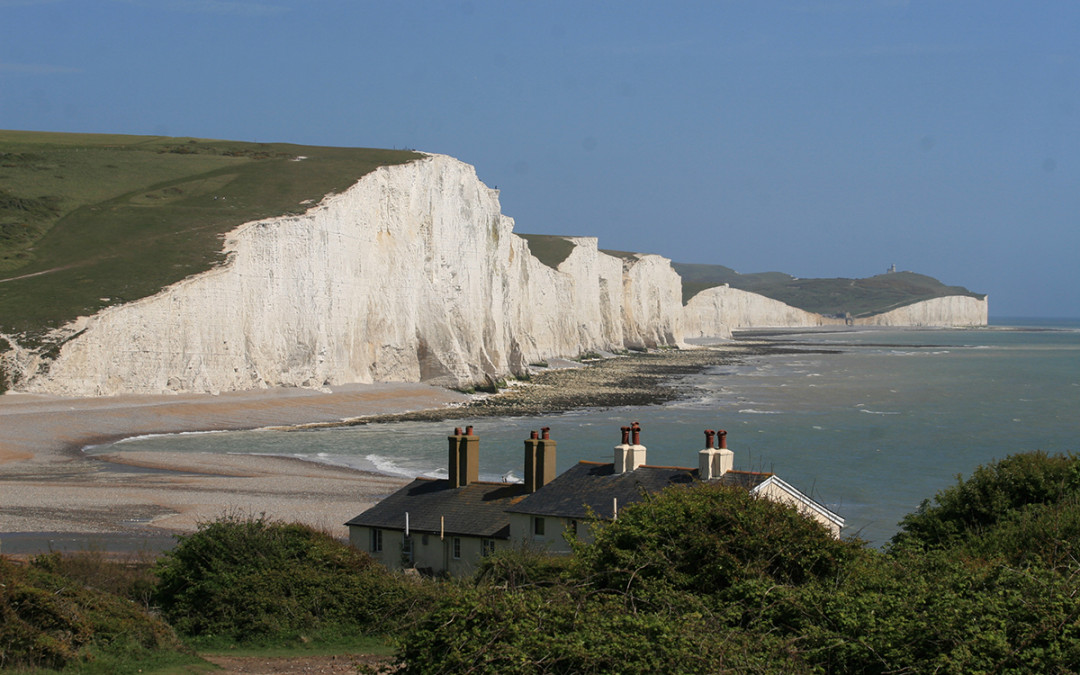 The wind came off the sea, fast and hard. Hitting the 300 foot high cliff face it shot upwards joining forces with higher level wind to bend and blast across the path. Birds didn’t take off, they just opened their wings and the wind lifted them into the sky, hurling them downwind as they turned soared and landed in the Downland field. 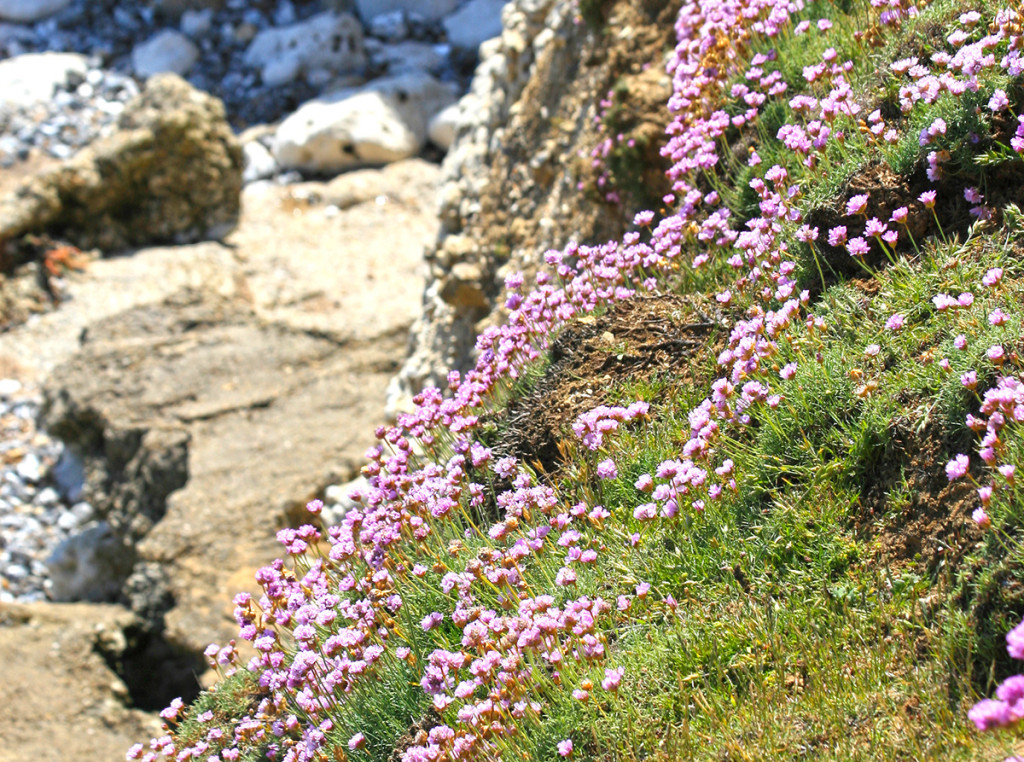 pink fringes for the cliff face

Not the gulls of course, which soared effortlessly along the cliff face riding the currents of turbulent air with grace. No these were heavy black crows, ravens and jackdaws that hurtled in a semi-controlled fashion across the sheep, landing to scavenge amongst the little heaps of dung, ignored by the lambs that were still suckling despite their size.

The noise was continuous, a mix of thrashing branches from stunted bushes and the occasional small hawthorn, rustling grasses and the roar of breakers. The drone of this cacophony was pierced by the sweet climbing notes of the skylarks soaring briefly in the wind. Occasionally a skylark would burst from the grass almost under my feet, invisible until it took flight, moving a few yards landing and vanishing again in the grassy scrub.

The cliff edge was fringed with pink thrift, and as I walked I saw the first swallow of summer whisking along parallel to the cliff face. I zipped my jacket up tight, the leather keeping me warm as the wind tried to get inside, or to whisk away my cap. This is what we call a ‘bracing’ walk I thought as I leaned into the wind. Blowing hard it was difficult to hold the camera steady enough to capture the gold of the gorse.

Flowers of my childhood bobbed in front of me, buttercups and cowslips (why did the cow slip? because it saw the bull rush…) Thickets of gorse are topped with great golden gobbets of flowers. Mixed with the cowslips in the log grasses were the delicate pinks and purples of native orchids and occasional bunches of bluebells added their colour. 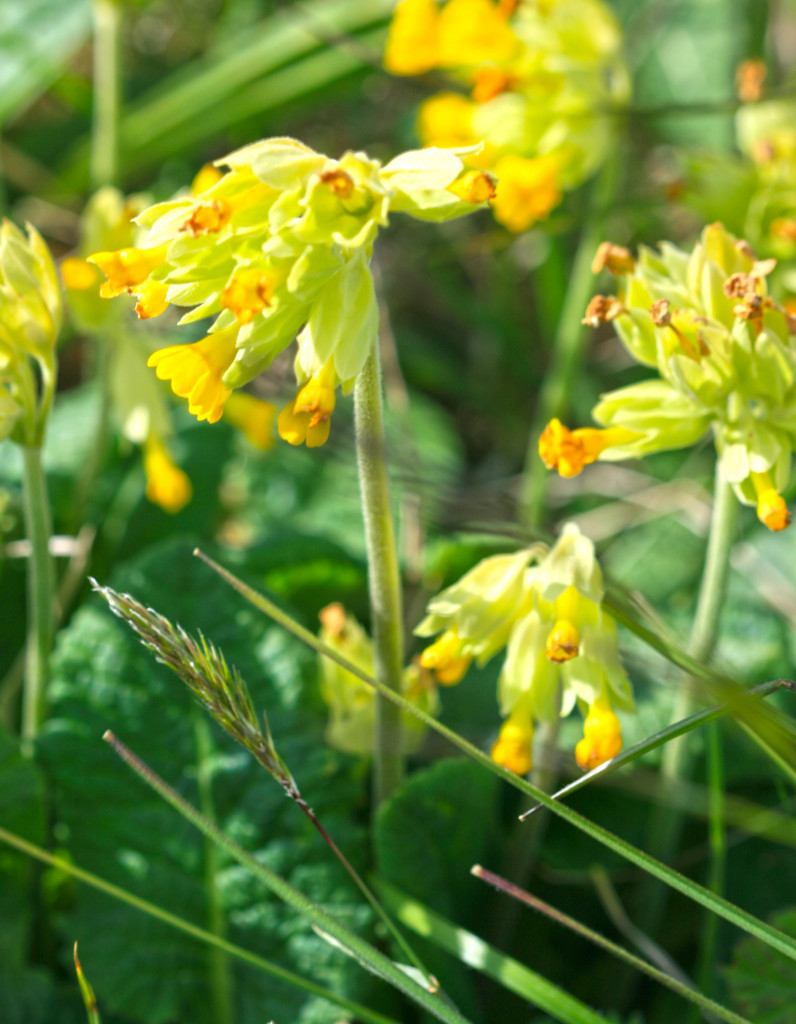 Occasional violets and pale blues dance amongst the bright greens of new grasses. The few trees hunch against the wind, their branches trailing forlornly, pointing eastward at the winds behest, their new leaves a young bright green, not yet shading into the darker green of summer. 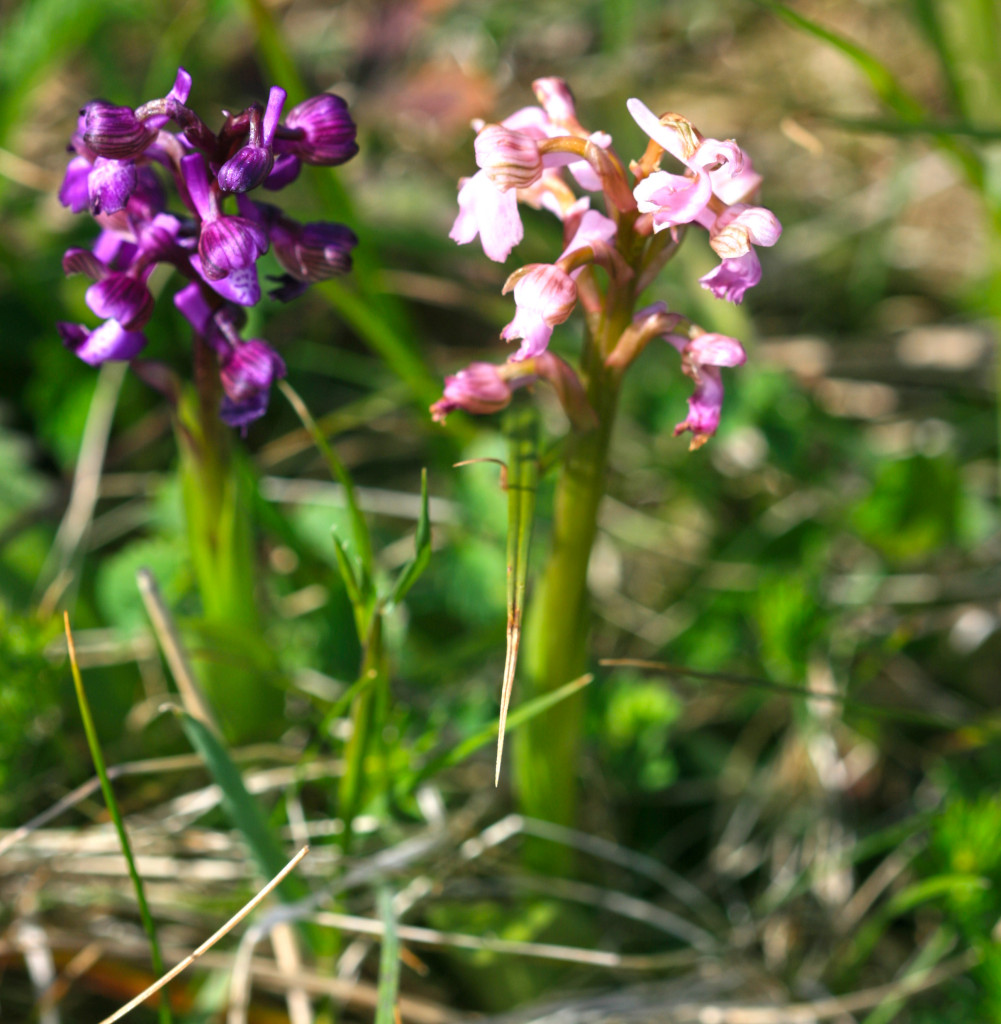 As if a reminder were needed that summer was not yet here, the spatter of a cold shower against my cheek urged me over the stile and onto the shorter route back, the sheep scattering at a gentle amble from my path as I cut toward the barn. Any thoughts of photographing the gate again for the painting were blown away. It will all be there again tomorrow, with a changing light

The Seven Sisters gleam a duller white today as the showers and spray are hurled against their impassive faces. Slightly brighter white shows the latest fall of rock, the chalk dissolving in the sea. Passing the barn where an adder lurks I’m already thinking of a nice cup of tea. Bluebells, orchids, linnets, blackcaps and skylarks, the distant ferry carrying travellers to Dieppe are all parts of my landscape. Earl Grey never had it so good.