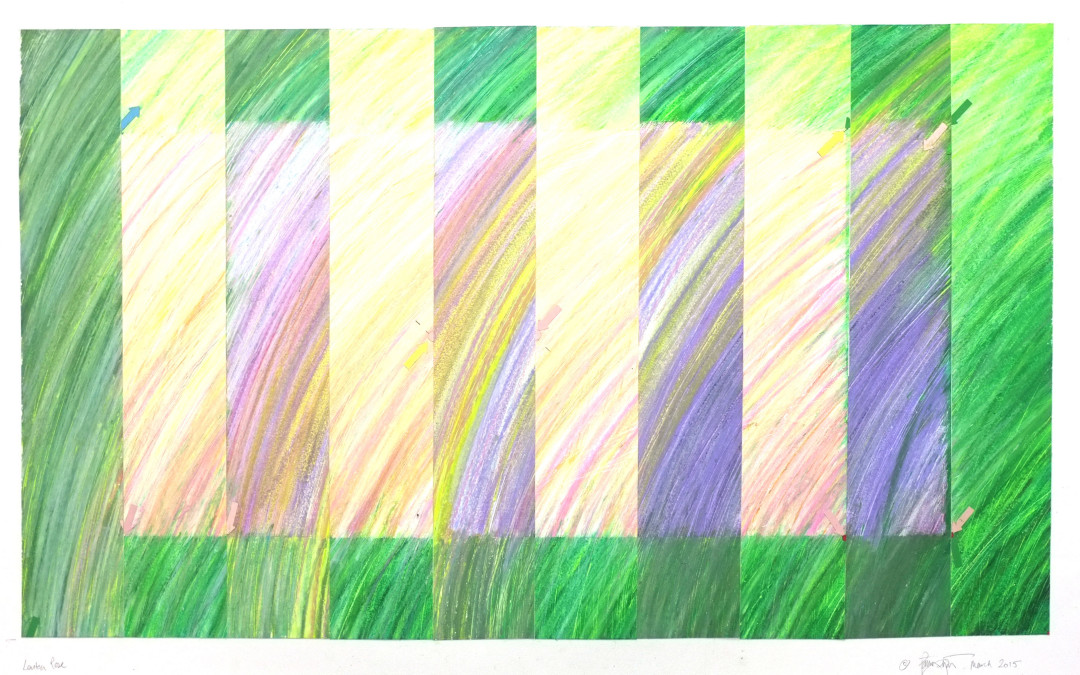 I’ve been playing with cutting up and collaging imagery. I have been using an Albers-like square to explore colour in plants from the garden. Sometimes I have been mixing the mark with imagery directly, not in the sense of filling colour into the image but treating image and colour as separate and complementary parts of working method. Sometimes I have used the drawings as the basis of a new work simply to explore the colour. Sometimes these have worked, sometimes they haven’t but that is the nature of experimentation.

The canvas, drawn up for the third time….

I have referred before in the blogs to the separation of drawing and painting as the split between ritual and mythmaking. Not my separation I admit, I lifted the quote from the artist Bernard Cohen as it seemed to me to be an apposite description of a process, especially my process in which drawing plays such a large part. After a couple of weeks of thrashing around using the grid I am used to playing with in drawing up a canvas, I finally made a breakthrough. The grid, I should explain, Is a traditional system for enlarging an image, transposing a small drawing onto a large canvas. I have always then incorporated the grid into the painting. 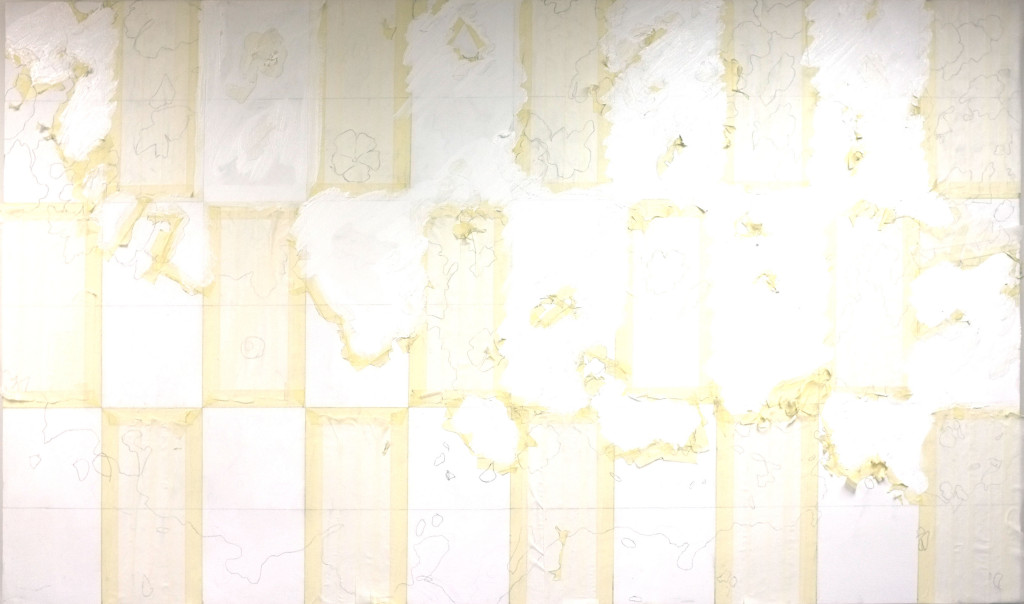 Masked up – I mask off areas so I can focus on the nature of the brush stroke within a defined areas, not worry about edge. It’s all about the mark and colour variation

This in part reflects the fact that it is a vital structural part of my process in two ways. Firstly mechanically it is important. But secondly philosophically it reflects the place of rules in painting – technical rules, or rules that arise from tradition. We are surrounded by such rules in everyday life as well as in art. Some are an essential part of a process. Some are a kind of glue that holds things together. Geometry underpins so much art from Uccello’s perspective to Piero Della Francesca’s use of geometry in constructing his paintings, through the Golden Section to Albers stolid square. The use of a rule bound grid that then corrupts and breaks up the surface reality reflects how rules often act in real life – the Law of Unintended Consequences 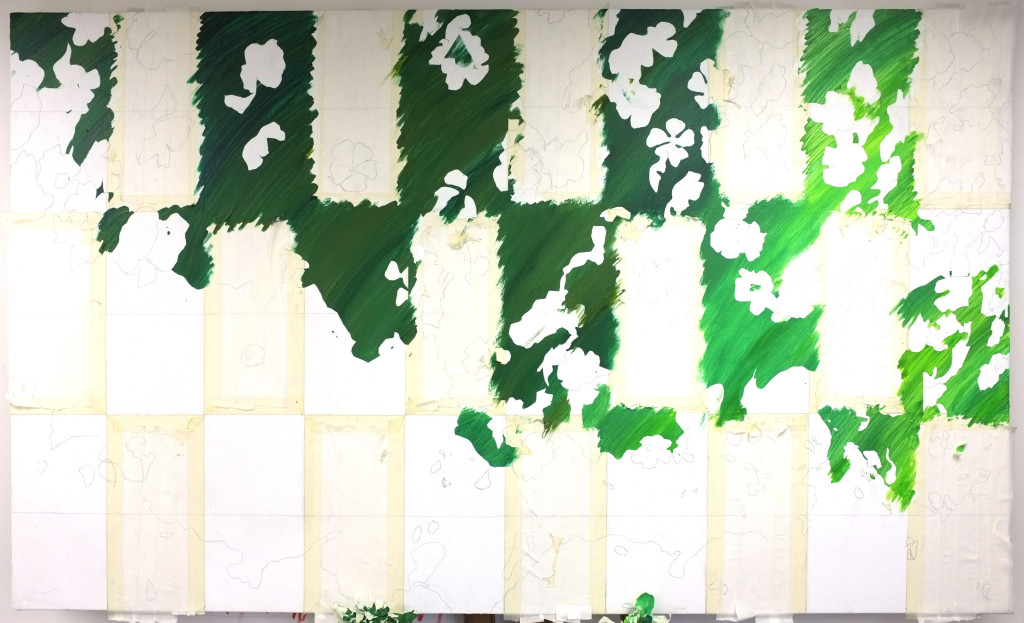 The first areas of colour are added

The collages I have been making have taken me a step forward in structuring what happens on the canvas. Some collage works are new drawings, considered for slicing and dicing from the outset. Some are reworking of old drawings, although I note my pastel technique was much tighter ( inhibited) than it is now. 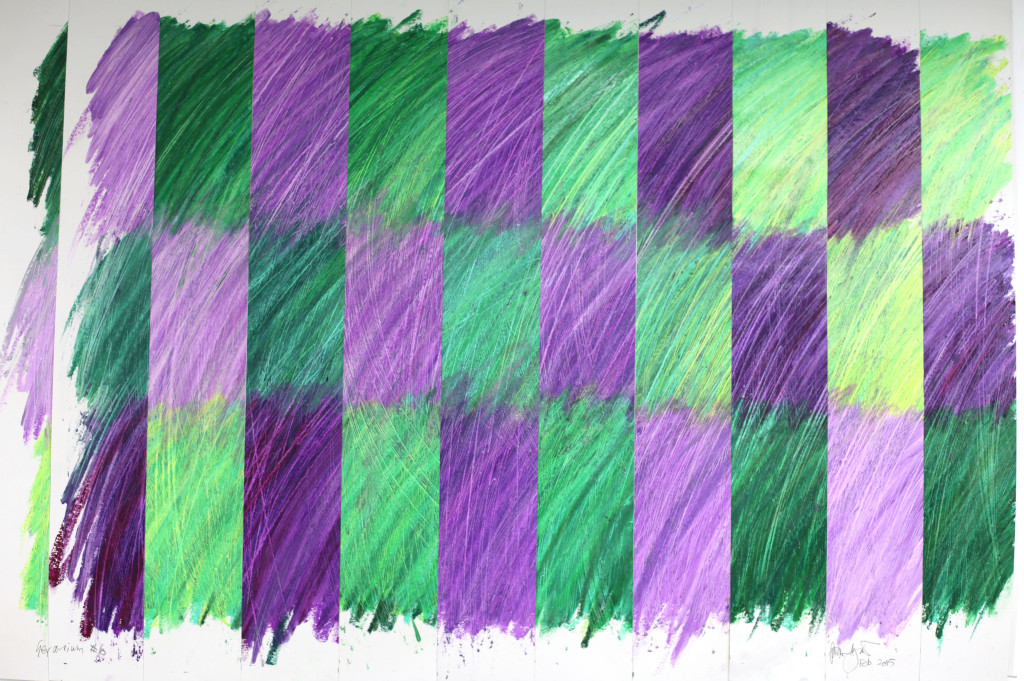 This is the end of my third day running in the studio, and I have finally started moving forward with a canvas that I have started twice before, but now for the first time have started to add paint to. It’s based in the images of geraniums from my Seaford garden, a source of colour and imagery for some weeks now, and I feel that at last I am moving forwards again after a period of plenty of mythmaking going on without anything coming near suggestion a conclusion warranting a ritual process like painting. 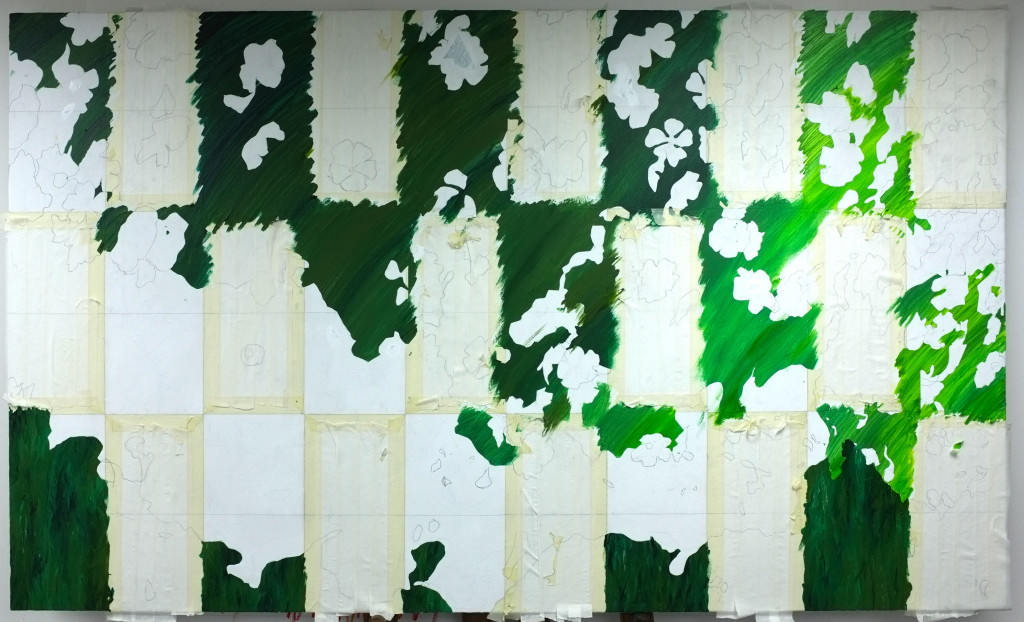 Unfortunately I now have to go away for a few days to speak at a conference, but I think that will not stop the process simply spin it out longer that I might otherwise want. The trick will be keeping clear in my own mind that which is clear to me now and not allow thinking to progress further and in doing so cloud the issue taking me beyond this decision point. 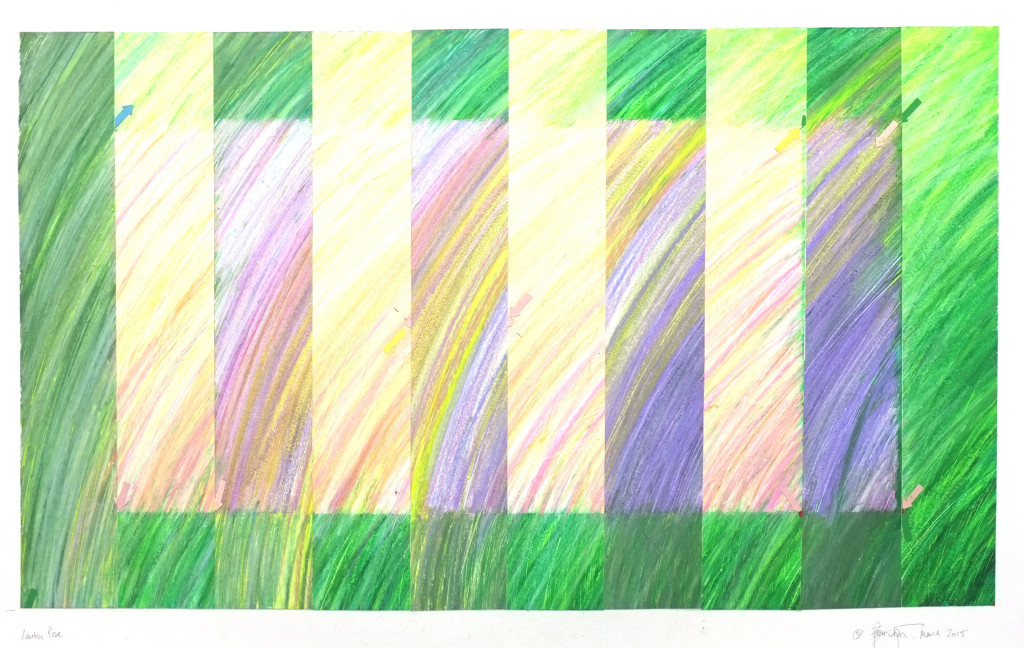 Ideas are flowing, and the timing of the forthcoming exhibition in the local art centre is a great opportunity to pull some threads together and see the direction the work is (or is not, as the case may be) flowing in. I finish the three days with a smile on my face, which is nice…