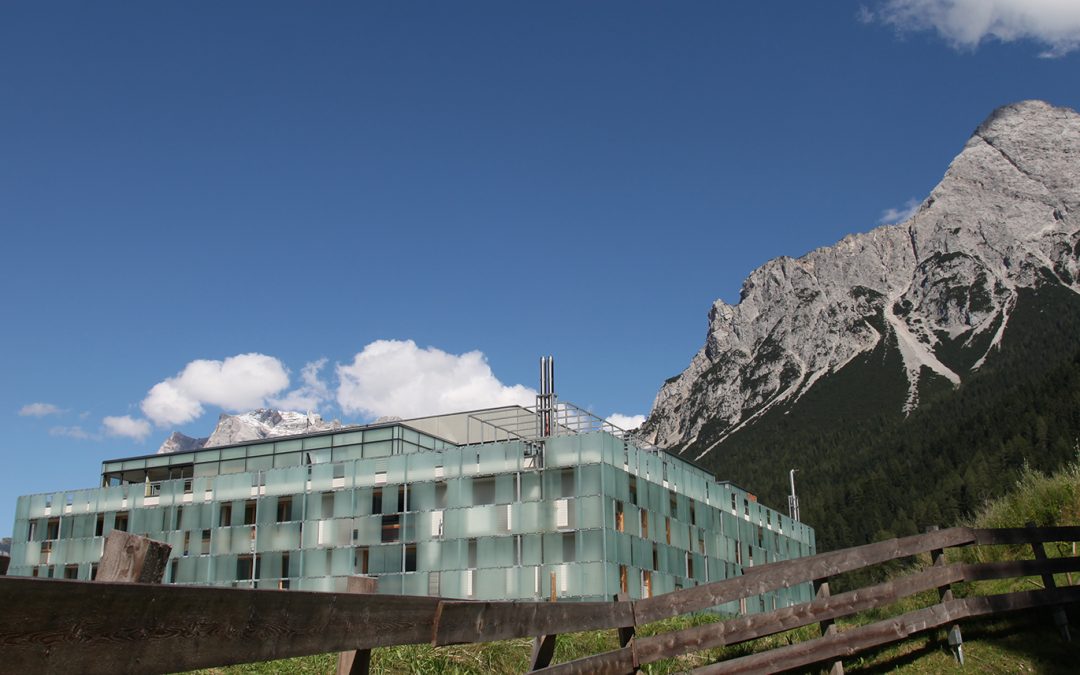 Since my stay in 2010 the Cube hotel has become an Accor operated property, and is now branded as Hotel My Tirol. It is an old belief amongst hoteliers that it is not the first owner or developer who makes money from an hotel but the third, and it seems that that is Accor’s position. It has had a makeover including the addition of a swimming pool, but the original ramps and structure remain to make this still a remarkably well-designed hotel for its original function as a ski/cycle destination. The original name, Cube, was expressive of the form of the building. It still is a glass cube, unashamedly modernist amongst the traditional Tyrolean valley chalet style architecture. Although Accor’s designers have rusticated the interior with the addition of traditional Tyrolean pine pieces, Accor has generally taken the interior more up market, making it more hotel like and less like a spartan hostel. Pine has been added around the bed frames, removing the original under bed storage units, and the room now offer throws, dressing gowns etc. that come with the Accor branding

The traditional Alpine form seen throughout the Austrian and Swiss Alps. The design tweaks added pay homage to this tradition

The ‘shock of the new’ of the original was added to by the building being floodlit after dark. That this was acceptable in a remote country community may seem, to English eyes at least, totally unexpected. To a rural community that relies to a large extent on year around tourism to supplement agriculture as an employer, then the development is a welcome sign of jobs and prosperity. The cube fosters that year around tourism, driven through the winter months by the winter sports and the rest of the year by the enormous fan base for both on and off-road cycling. The hotel has clearly been defined to meet the needs of these sporting communities, with unique provision for their needs. In addition to having ramp access to enable bikes/skis/snowboards to be taken to rooms, there are lobbies to all the rooms offering drying and secure storage for kit. It also offers hang-gliding, walking, child-centred trail experiences using large wheeled scooters and trikes all as a ‘base to stay’ in the mountains.

lobby for storage in each room

The Biberwier-Lermoos position meets the three ‘l’s’ of Mr Hilton being: located in a beautifully scenic valley: located at the centre of 100 different cycle tours covering 4,330 kilometres of the Tyrol: located within 200 metres of the ski-lift system. In the summer, the ski-lift will even take cyclists to the top of the mountains for the intrepid to use their mountain bikes on the ski trails, downhill only of course.

Views are of the mountain peaks, and taking a picnic by the roadside showed the popularity of the winding mountains roads with motorcyclists as well as the pedal powered variety as bike after bike streamed past us. None spoiled the drive nor the bracing environment with its pure air and spectacular views, but indeed emphasised the attraction of the valleys for cycle and motorcycle tourists as well as ramblers and of course their winter sport visitors.

Inside the hotel the difference in making provision for bikes and skis etc. becomes immediately apparent, as the centre of the cube is a hollow atrium dominated by ramps that allow cycles to be wheeled to rooms. With mountain bikes costing thousands of pounds for the fanatic, the security of having the bike inside the room is an essential. Here the rooms are glass fronted, and each has an area known as the ‘showroom’ with rails for hanging bikes, skis, snowboards etc. up to dry. There are bike washing facilities and a bike rescue centre at the hotel with an underground repair shop. In the winter, there is an après-ski nightclub too, with log fires then being a focus of the ground floor. The log pile is a typical sight in the Tyrol, almost a swank element depending on size and has been made a feature of the public areas.

The tweaks to the public areas have made them a little more comfortable, more bourgeois Not only does the bedroom’s ‘showroom’ offer facilities for secure storage of sporting equipment but it also has specialised drying facilities for shoes, boots, wet suits etc., guaranteeing to guests that their gear will be dry in 24 hours. The rooms themselves cater for two in the usual German system of to single beds side by side. Some rooms come with a double bunk system allowing three or four to share, or catering for families. All rooms are suitable for those with disabilities. Food is done with extended service hours in a cafeteria style operation, offering plenty of variety of salads, fruit as well as more traditional meals.

The ramp enables easy access for those with roller cases/cycles/snowboards/wheelchairs The storage areas are defined by obscure glass with the area then acting as a lobby to the room proper. The design took the opportunity offered to colour code the floors through tinting the glass deeply although this still allows the glimpses of the cyclist’s gear. The space also allows for storage of luggage outside the bedroom area. Rooms are basic, utilitarian, flooring is carpet tiles and having a shower room only. However, the toilet is a separate facility to the rest of the bathroom, and whilst the whole is basic this does not mean it is not stylish. Lighting is good, with good reading lights throwing a generous pool of light, and a line of lockable units double as desks and secure storage, each being equipped with power points. The basic metal framework of the furniture has been softened with the 2012 makeover by adding typical Tyrolean pine cladding, warming the appearance although being, to my mind at least, a retrograde traditionalist step.

Wardrobes could have been sourced from IKEA, and there is no chair in the room. Instead the wide corridors have rows of seating encouraging a communal sharing of experience and when full the atrium echoed with the cries of the cyclists as they exchanged experiences across the space. The showroom with its second door ensured good sound insulation from the ‘street’ activity for the bedroom area. With the emphasis on sport the atmosphere is redolent of tyres and oil in the summer, and I would imagine full of the equivalent ski scents (embrocation and liniment?) in the winter. Whilst the target audience is the fitness enthusiast, there are plenty of 50 plus guests and families in evidence, and many walkers obviously find the hotel attractive – on my visit in summer it boasted near 100% occupancy, and its proximity to the ski lifts must guarantee popularity in the winter sport season. Its accessibility for cycles means it is also accessible for those less able, using the ramps. 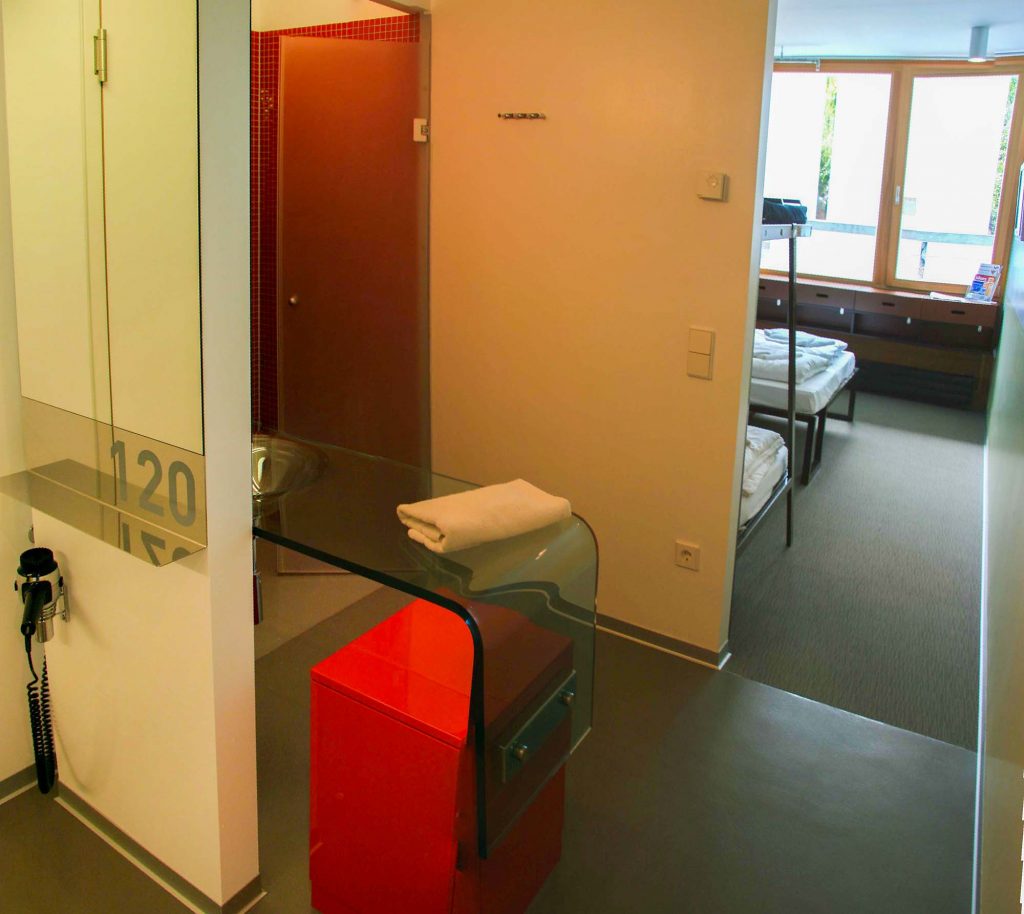 That cycling is a popular sport driving occupancy can be seen by the presence of cycle companies in the forecourt, Shinamo and Fox both having marquees and staff in attendance on my visit. The cycling clubs and their sponsors also enjoy the use of meeting rooms on the top floor, and there are massage, sauna and spa facilities available, although for some strange reason these creatures seem to prefer to relax by working out in the gym! There is also a games room with electronic and table games as well as a climbing wall. What is noticeable absent is any specialist room provision for those with disabilities, although there is a disable toilet provision on the ground floor. Like the planning permission gained for this bold, well designed and successful building, it seems that the nature of the audience and location have given a pragmatic edge to interpretation of regulations. Designing to allow cyclists to wheel bikes around means ramps, wide doors etc. make accessibility easy for wheelchairs – if there is someone to push them up the ramps floor by floor! There is a lift, and Accor in their blurb make it clear it is accessible.

The changes made to the operation have enhanced its attractiveness, especially the addition of the pool to the front of the building. The design changes are evolutionary and reflective of the operator standards. In some ways, the design concept is diluted but the fact this is now operated by someone other than the original suggests either there was a need for marketing muscle, or the original concept did not survive the rigors of recession on the Continent/global warming impact on the winter ski season or poor marketing.

Accor’s Hotel My Tyrol can be booked here. The original Review no longer exists in the form I created it in, unfortunately