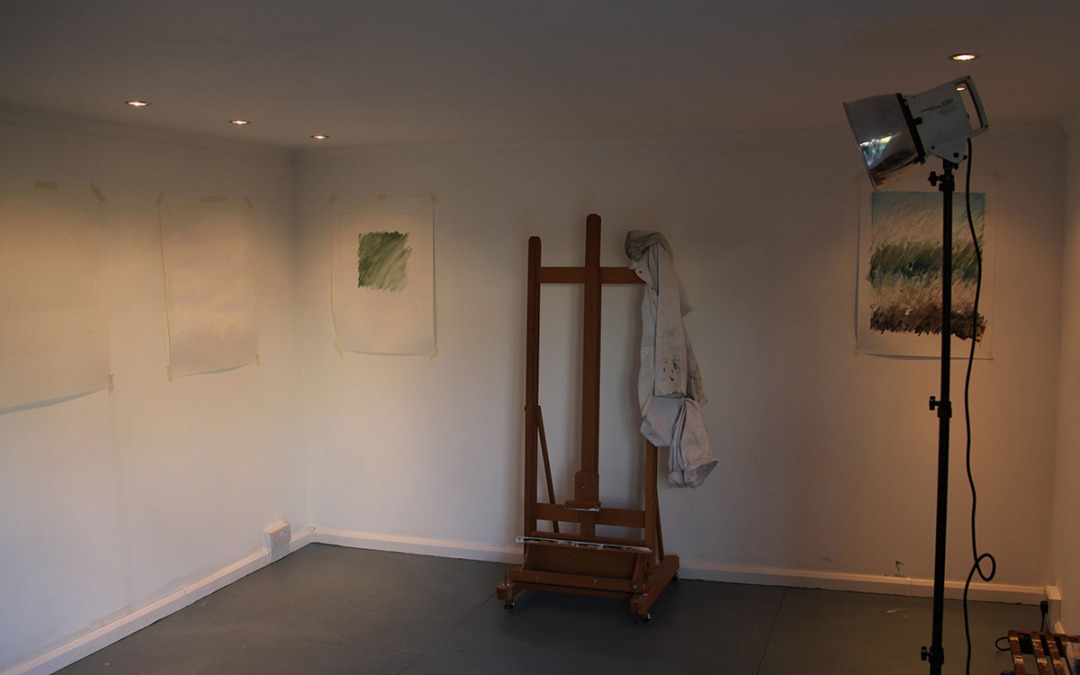 When a student in the 60’s I had a series of lectures on colour and perception. One in particular sticks in my mind. A series of panels of white paint were placed under the light from a slide projector, in front of a black background. As each panel was added it made the previous panel look grey. The simultaneous contrast with the black had made the first look white but 8 panels later it was clearly a grey. (see my experiments with colour in the 60’s at  Use and abuse of colour ) 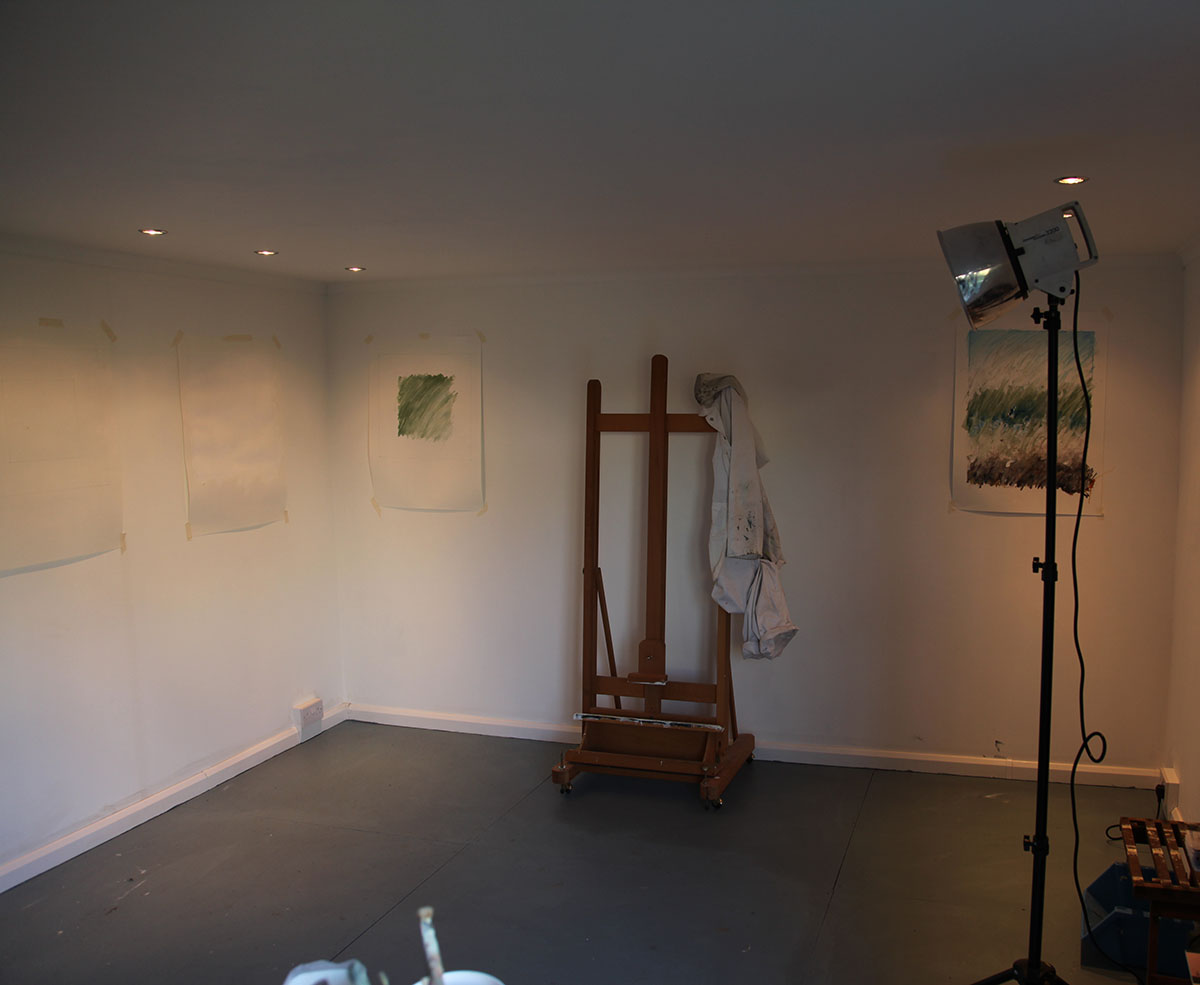 The old lighting was flush with the ceiling but crap

Most galleries show work under artificial light, and the constancy of electric light compared to daylight has made me try to create controlled white light in studios I have worked in over the years. This has meant trying daylight adjusted neon tubes (work in the blue spectrum), photofloods (expensive, throw out too much heat, and yellow) and halogen lights. 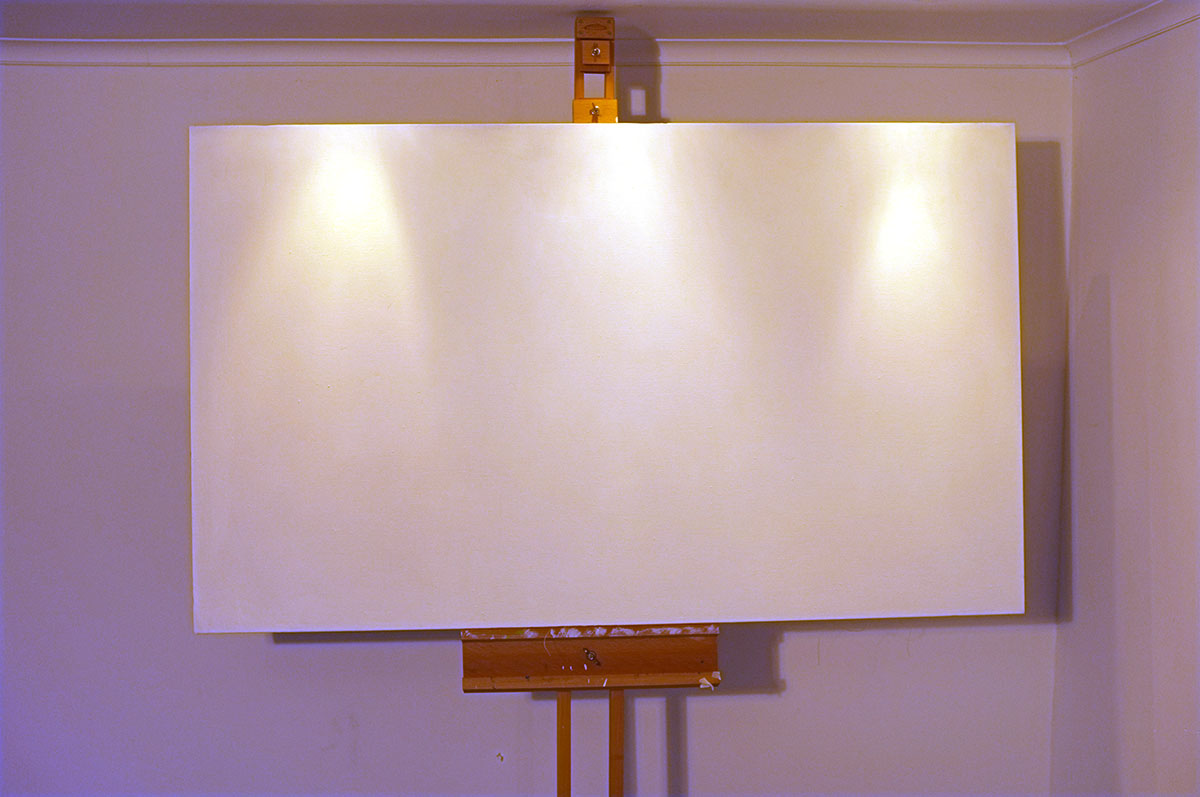 When my new studio was built at the bottom of the garden the lights were halogen. Because planning restricts height, the internal ceiling at 2.3metres was pretty low, and the lighting was pretty crap as well as cooking the top of my head whilst I worked. I remember a conversation with an hotel chain about energy use at which they revealed they had been working with Philips to create lighting that was both energy efficient, and whose output could be colour tuned for different areas of the hotel. Their lighting was LED. 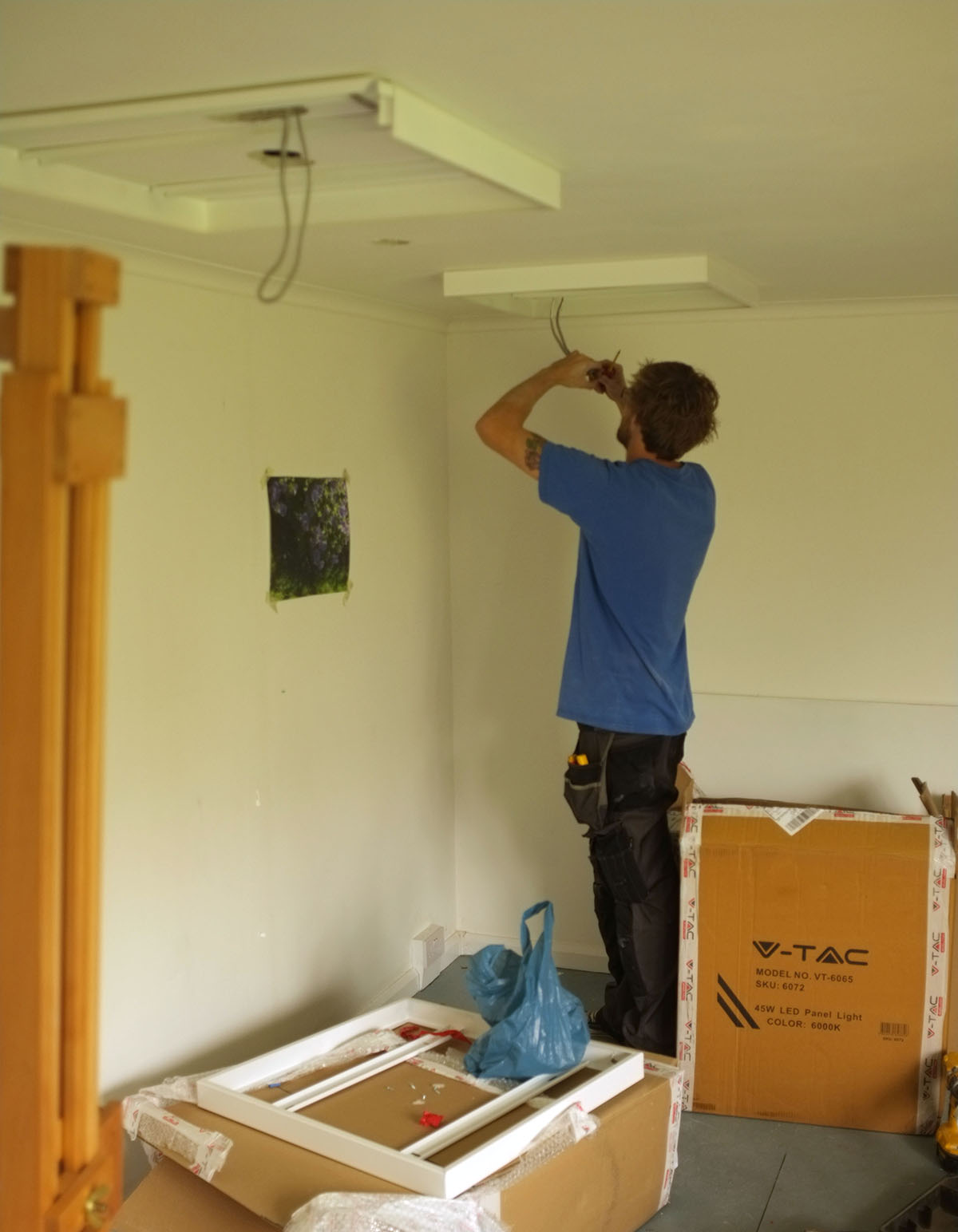 When we had the house rewired (an ongoing process) we had LED down lighters added. Their light was warm (slightly yellow I think) but a good white and not only energy efficient (less than 20 per cent of normal energy consumption) but cool too.  So I went to a couple of local electrical installers and asked advice. Given a couple of options I have had flat panels LED’s fitted. They reduce head height under the fitting itself slightly but they emit no noticeable heat and the light is brilliant. 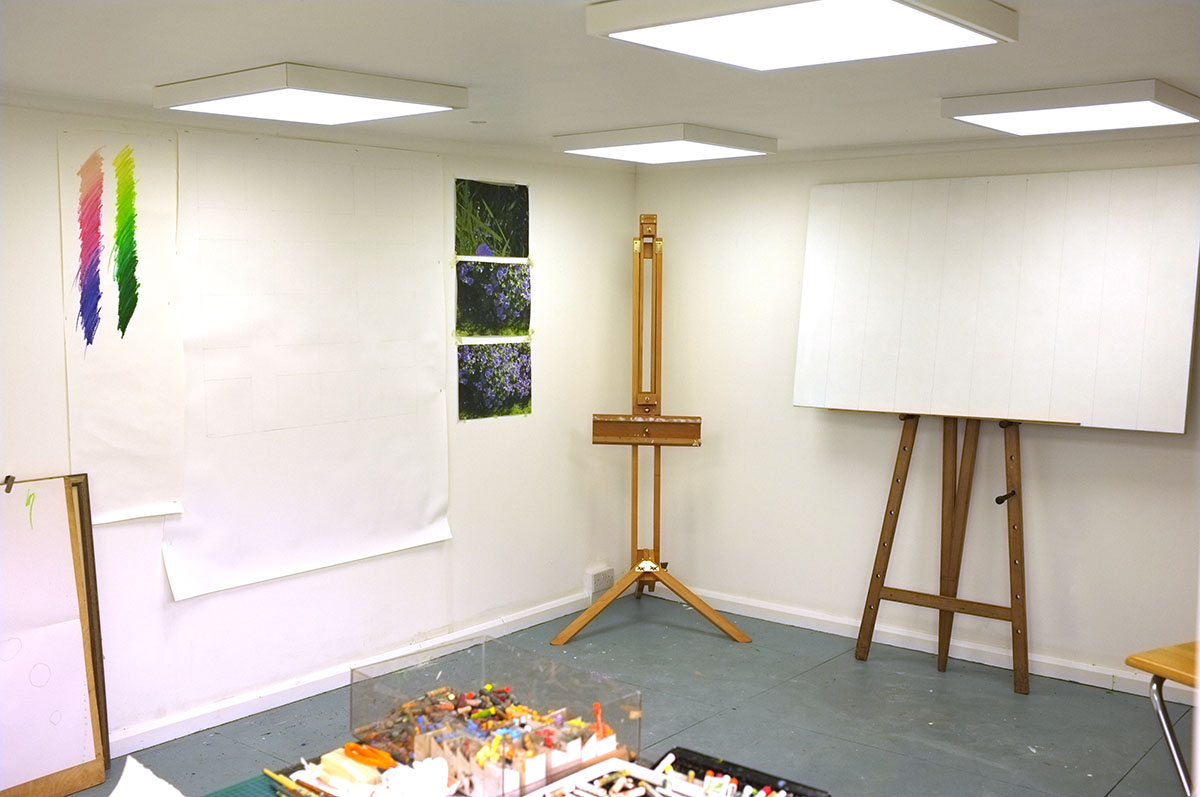 New lighting much more even, and will be far better for working under. Brighter and whiter

The results are stunning. Not only do they consume far less energy but the output gives almost a flat lighting across the whole area of the studio, and it appears to be a good flat white. I found under previous lighting (admittedly poorly designed, I had to accept what was in the building package) I could not see properly where I was priming the canvas. Now everywhere is lit. Colour rendering looks brutally honest. It is a delight to work under. 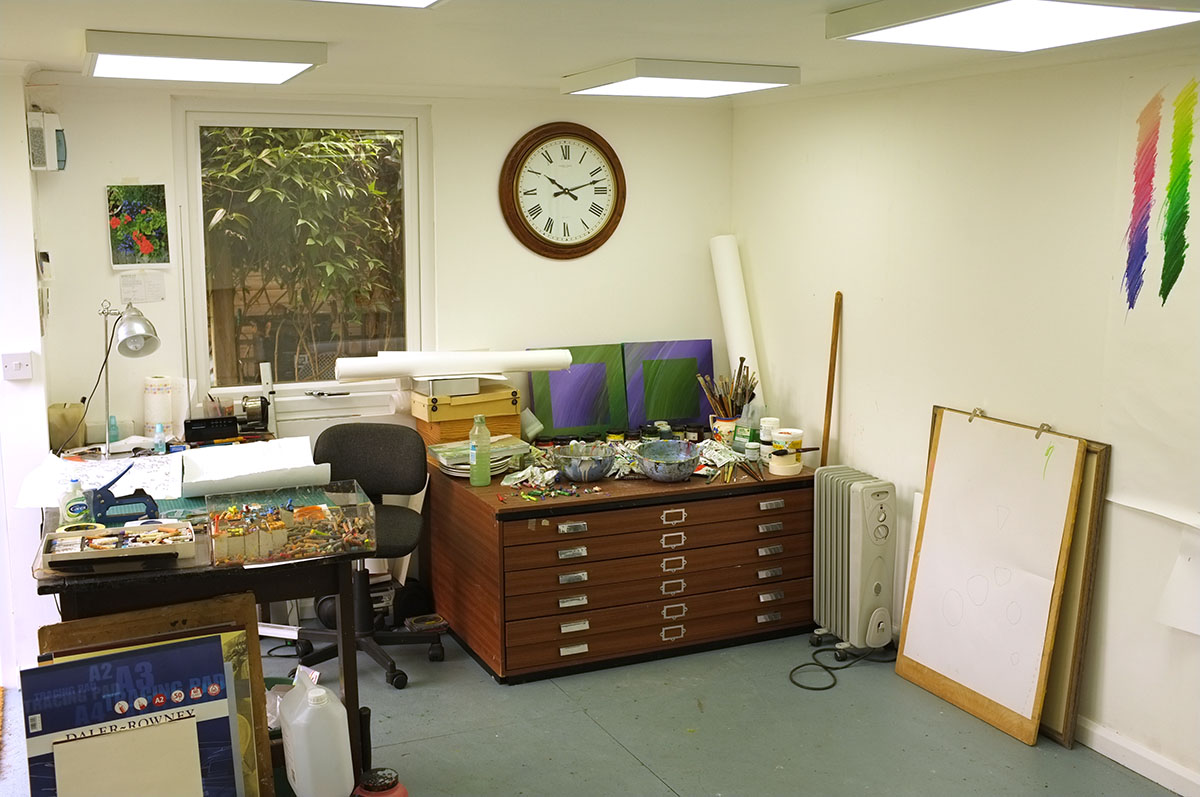 If only the winter flu jab hadn’t laid me up for a couple for days I would be by now able to give results of experience in working in this lighting – but next time. Meanwhile I give you these images and from experience so far, unreservedly recommend that you consider these panels for you own studio lighting