Roses are Red, Violets are Blue, and grass is always greener 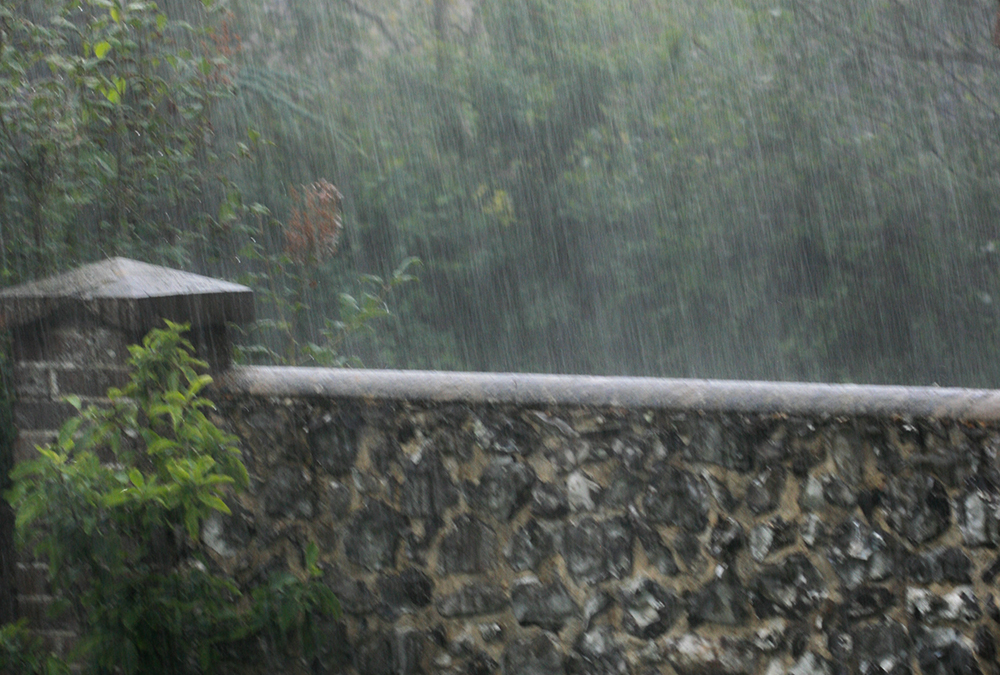 Raindrops glistened in the grass after we had a thoroughly violent thunder and rain storm.  I decided to draw outside with the oil pastel. The sun was hot enough to turn oil pastels soft and gooey – not a good choice of media to start with. I then compounded one error with a series of other mistakes – getting hung up on trying to draw grass, instead of thinking what it really was I wanted to look at.

I took a table out onto the lawn and set myself up to draw the border that fascinated me with the elusive variations of colour it went through. Second mistake was thinking it was the drawing that mattered. So I spent an afternoon struggling to draw fallen petals on the grass before I realised the camera was a much better tool than my fingers. Interesting that Photoshop made no better a fist of rendering a line drawing of grass than I could do with pencil, but that was another blind alley. Mind you in the process I did make one small drawing of grass and daisies that I liked. 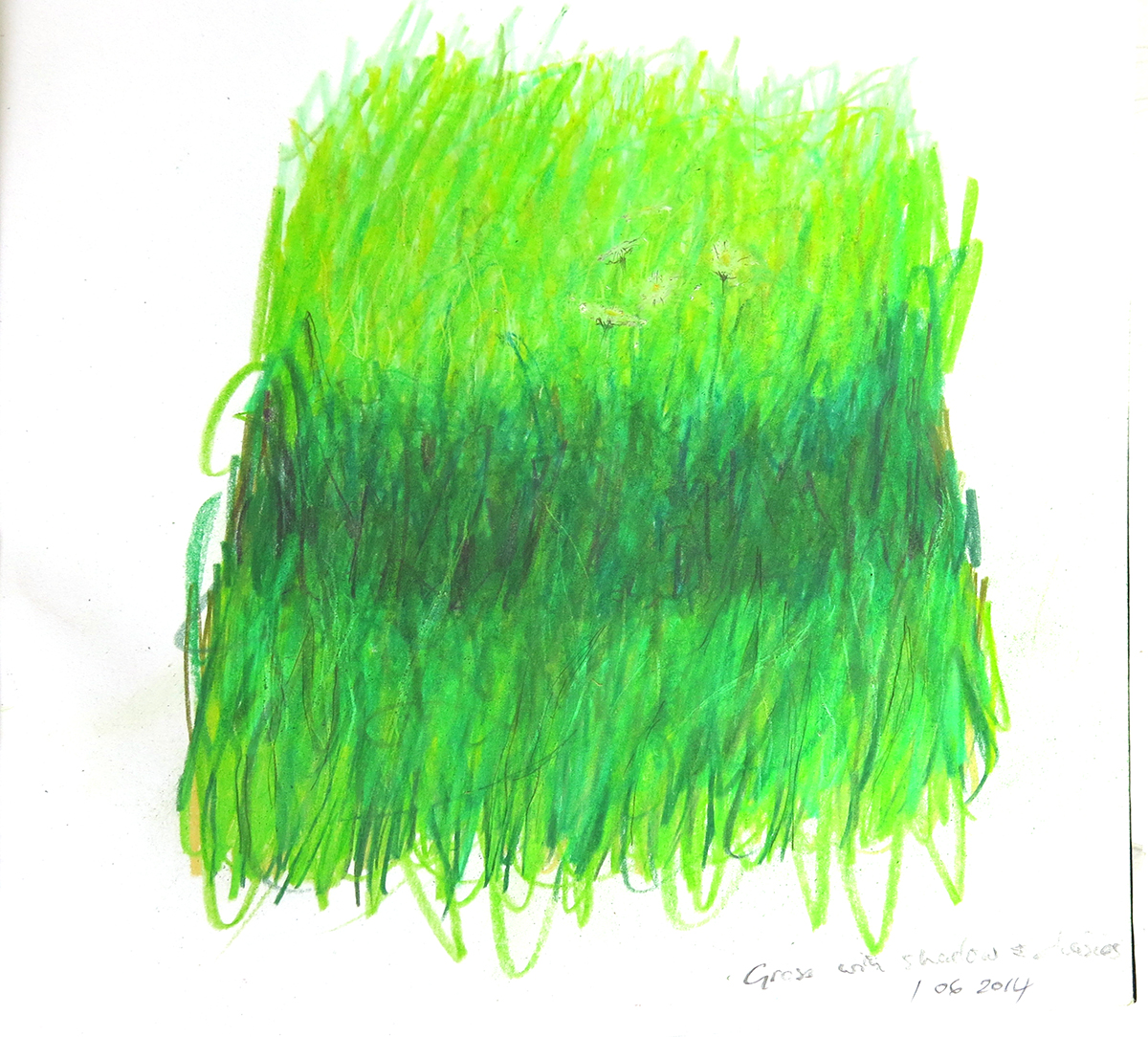 I came outside because trying to work out the stems and nature of the plants for the California poppies wasn’t working. Same reason – I was hung up on how the thing looked instead of what it was that I saw, if you get my drift. It looked like a load of stems in various shades of oxide of chromium green with the golden cups of the poppies and the red poppies behind contrasting, a picture postcard photo. But what I saw was a golden arc of yellow and orange over the green,  culminating in black centred red poppy shapes against a blue  – two colour pairings of a secondary pair (green/orange) against the primary pair (red/blue).

I had to get behind what I was looking at and see what it was that fascinated my eye – my brain was getting in the way.  Randomness may be apparent but underneath is the orderliness of the progression of growth, almost a mathematical pattern and that pattern of colour created what it was that I was really captivated by.

The image that captivated me

Now here I was making the same mistake again – seeing the picture of the garden border geraniums but not appreciating the fascination arose from the colour change with shadow and the contrast of purple and green created. So another day went on wrestling with the wrong set of problems. Finally I started to see the real issue, and although I filled the sketchbook pages with pencil images I realised the colour could only be matched with paint. I love the involvement I get scribbling with the pencils but my inability to see the real thing I am responding too makes me realise that although the drawing is an essential part of the realisation of the problem (the myth making as Bernard Cohen would have it) then it is through the ritual of painting that the ‘solutions’ with be identified (the ritual). 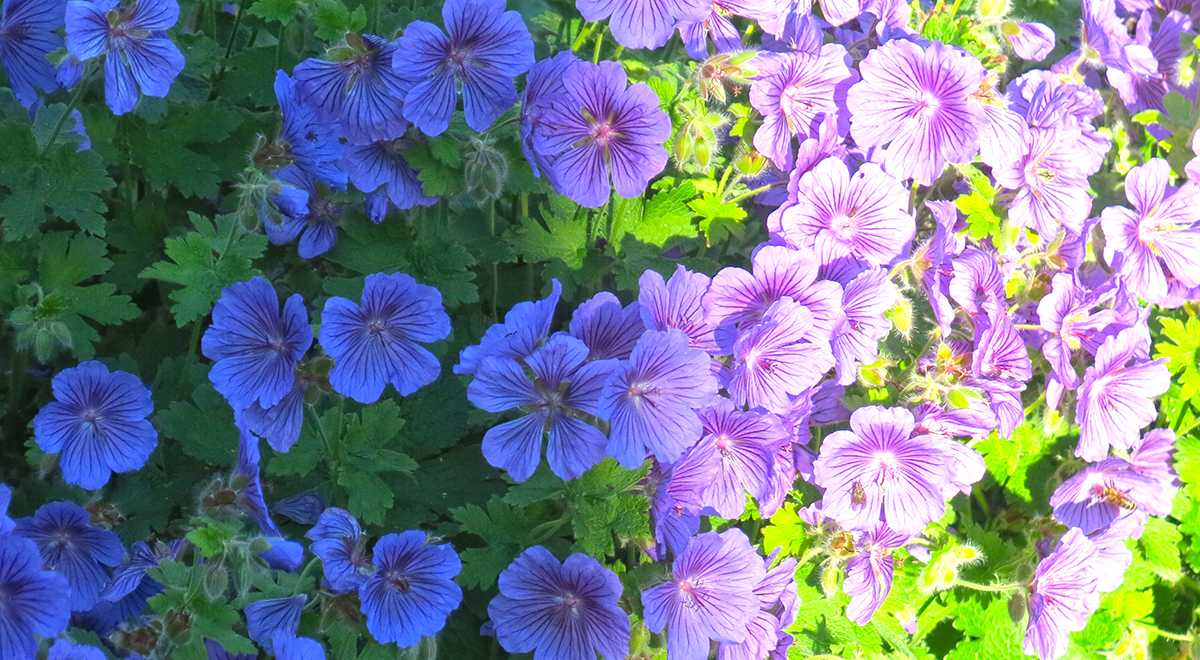 Before it gets to that stage more drawing must be worked through but this time concerned with pictorial composition. The intuitive construct that the camera/eye combination provides through initial composition and then the editing (cropping, sizing etc.) is Ok as far as it goes. But once the process goes through to becoming the icon that sits on a wall then all the considerations of structure, visual tension over the surface need sorting before scale and shape are decided and the canvas made.

Finally getting togrips with teh issues

I look forward to making the canvases with some trepidation. I’ve been to my local art stores but all the canvases have gone metric, and any way I would want something that would turn out non-standard I’m sure. But it is years since I sawed the timber to make my stretchers, so I need to put my thinking cap on. There are two paintings in here perhaps – the California poppies and the very English geraniums. There is still a fair amount of drawing to be done yet to sort out the size and proportions of the canvas, so onward and upward.