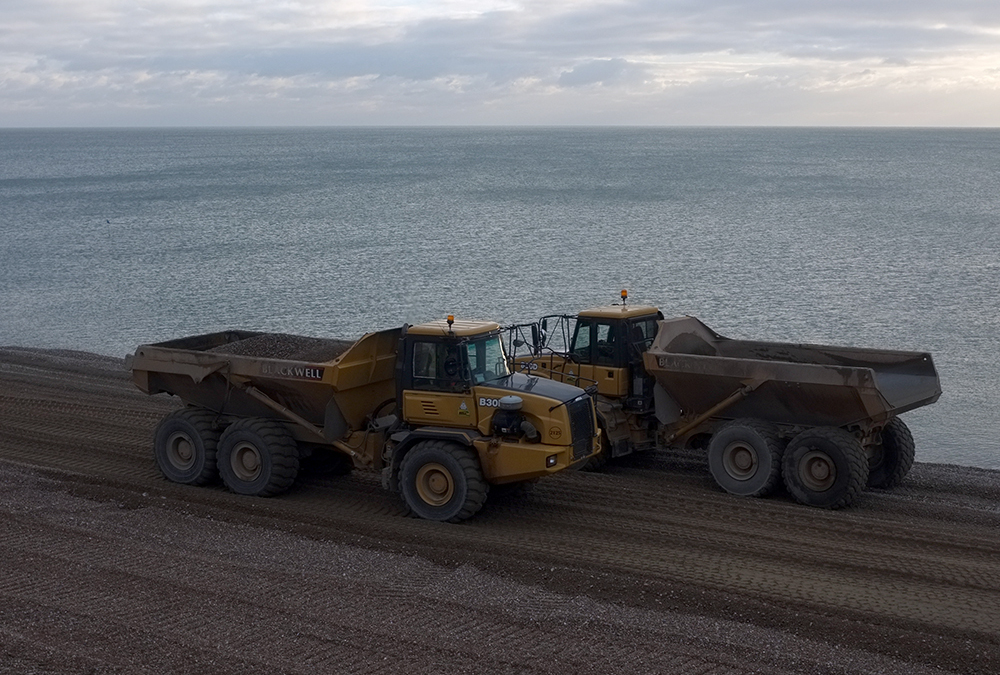 Seaford’s seashore is a single shingle bank. Not a beach it seems but actually Seaford’s sea defence system. Some say this sea defence was made necessary by the extensions to Newhaven harbour, and the wakes of the larger vessels going in to the port which scoured away the previous sandy beach. Whatever the reason as a sea  defence it is becoming the subject of debate as to the long term efficacy  of the Environment Agency’s methods of keeping it intact.

The beach at Seaford, with shags on the rocks in the sunshine of August

The normal soft susurration of shingle softly dragged along the coast by the ever patient sea is now covered by the snarl and smell of powerful diesel engines as diggers, bulldozers and heavy tipper trucks try to counter the seas unceasing move of the shingle towards Seaford Head. The shingle is shifted from the Splash Point end of the beach and trucked along the shore to be tipped in front of the Buckle, a mile or so closer to Newhaven

The seaweed marks the high tide line, whilst the cones mark out the danger area for walkers

It has become a ritual of the autumn months as every year the defences are reset ready for the winter storms. There is debate about the efficacy of the ritual, and fear that rising sea levels will see a need to raise the shingle further. Originally there were lines of groins down the beach, long buried under the shingle, and the annual cost (estimated currently at £150,000) can only rise in line with the rise in sea levels.

Sand appears here and there as the shingle is pressed down under the weight of the wagons, and the seagulls wheel overhead in mute displaced circling – very unlike them to be quiet but the roar of the man-made goliaths overwhelms any sound they make.  The tracks of the trucks look like the beginnings of a dual carriageway, and whilst the ruts may seem permanent against the power of the sea they are as nothing, and will quickly vanish.

When I moved here the flood map showed us outside of the threat zone, and as a nation we are fortunate to live on an island not noted for suffering from typhoons or tsunami’s. Maybe I should just be grateful for this spending of tax payer money every year, but I wonder if there isn’t a better way? Spoonbills have been seen in the area just along the coast known as Tidemills, and maybe there is a wetland solution that can ease this pressure the sea brings on this coast.

In all weathers. Does he get danger money do you think? Or has he driven this over from Calais….

Unfortunately Tidemills is also likely to be the site of a wind turbine assembly area, with Newhaven a support harbour for construction of an off-shore wind farm, so technology and straight line thinking seem to be enough to ensure a more creative solution is unlikely to be found or implemented.