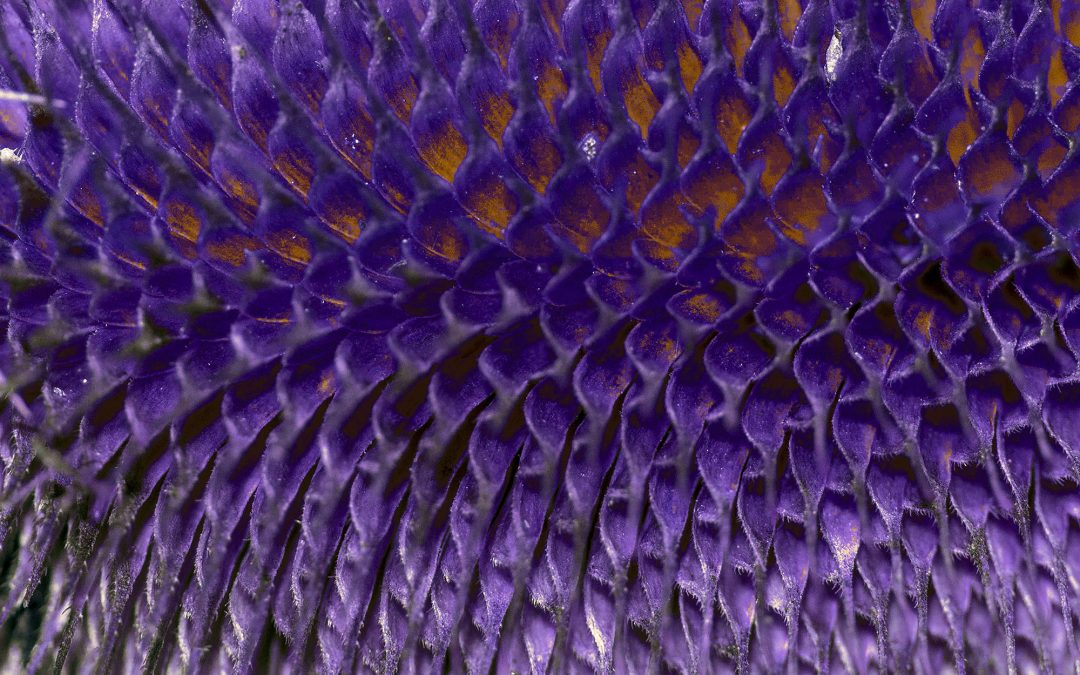 In my blog at the end of January I wrote “I hope to explore more loosely the colour ideas” that I was exploring in drawings based on the BRotS series. Slowly this has come together, interrupted by a long sojourn in South Africa and the time spent focussed on health issues. But then I have always been a slow worker, so much so that one of my tutors (Michael Simpson, I believe) tried to fail me at finals because he claimed I ‘never did any work’. No comment. 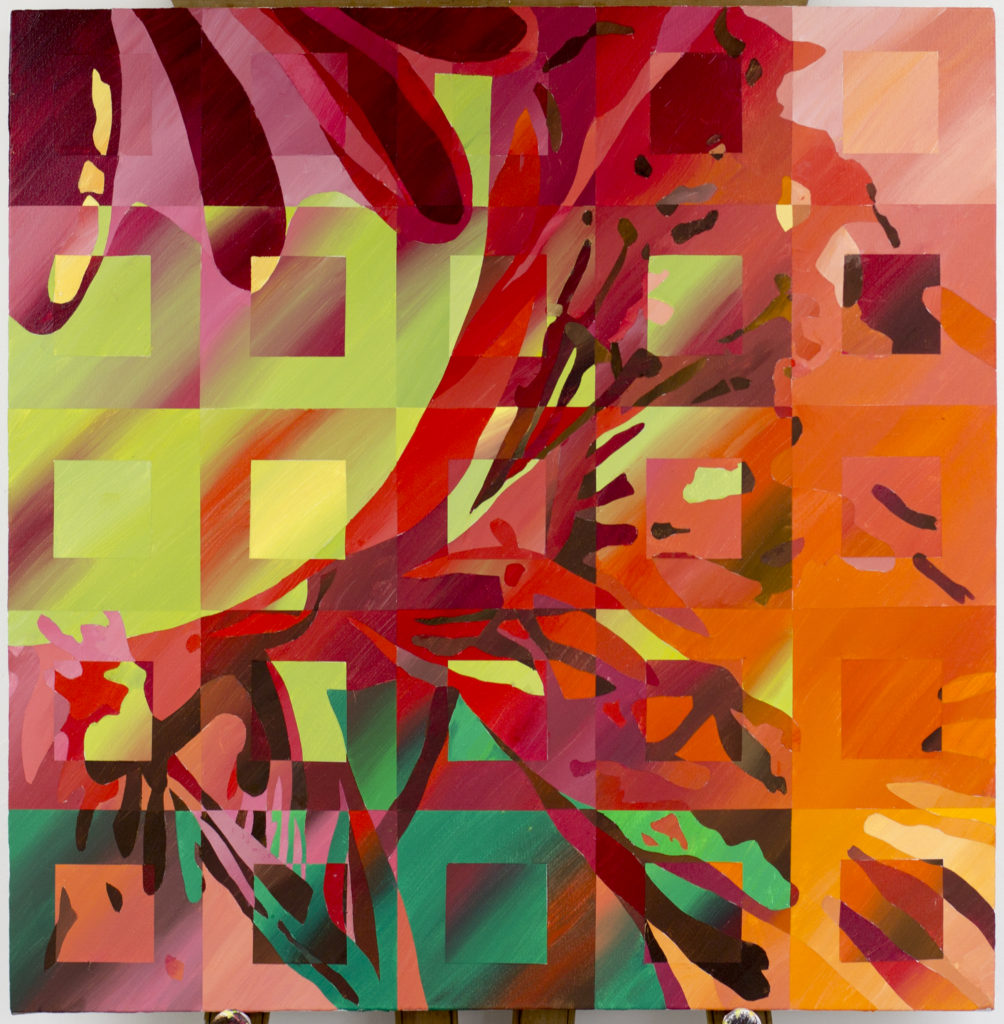 The ‘Teasel’ painting has come out appearing quite violent, and in my own mind I think of it as ‘War’, the disappearing grid reflecting the breakdown in the rules based international order that has seen Russia and China blatantly ignoring the rules of international behaviour to push forward their own power grabs knowing no-one wants to start a war to make them obey the rules. Does anyone else see the parallels between this and Hitler’s annexation of parts of the Czech Republic in 1938, or Mussolini’s conquest of Ethiopia?

The fierce competing colours in the painting are intended to create movement and space on the canvas, having decided that rather than go down the Richard Smith route of making 3D canvases I would use the language of paint and colour to create the spatial movement. The grid lingers on in the background like the fading protests of the UN, and the new grid of the colour overrides it. 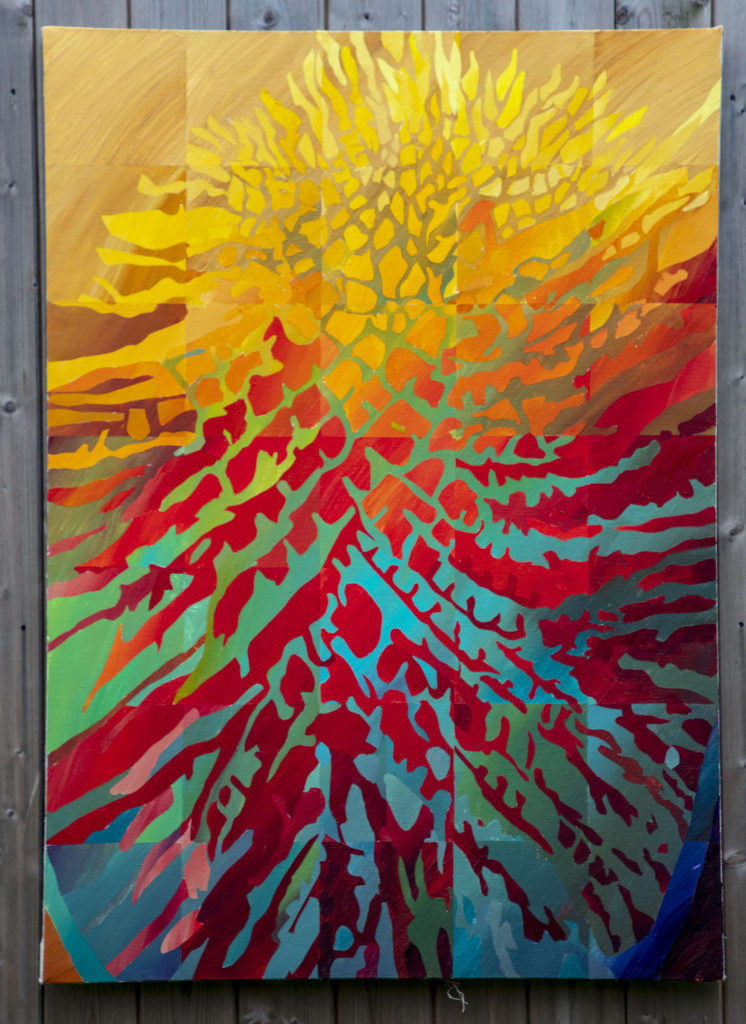 The last major painting I did, the ‘Brexit Daisy’, similarly looked at conflict as well as the expressiveness of colour. Unlike the ‘Teasel’ painting the ‘Brexit Daisy’ used the grid and arcs of pots as its underlying geometry and to create two competitive areas of colour, competing and pulling apart on the canvas. In ‘Teasel’ the colour works through the drawing of the natural grid in the teasel, pulling and shaping the surface quite violently I think.

The previous ‘Poppy’ images I refer to as my Star Wars paintings since they look like the mythical ‘death stars’ from the fictional movies. The next ‘Poppy’ image looms large in my mind as, again, something a little oppressive. Maybe it will change as I execute it, but I cannot escape from the world where politicians and industry lie and manipulate to further their own beliefs and fortunes at our expense. The latest examples include the prosecution of doctors recommending low carb diets in the face of opposition from the food industry, of heavily twisted research papers produced to spuriously justify drug trials by ‘Big Pharma’, and of state euthanasia in English hospitals where NHS staff have been killing off elderly patients by administering fatal overdoses of drugs.

I believe that a painting can have layers of meaning. It can reflect reality not just in the superficial, albeit perhaps highly skilled, reflection of a scene or landscape (such as Soviet Realism). Nor does it need to be explicit in making a political statement (like a Banksy cartoon) but can be subtler, using the language of art to carry the message. Through history artists have been lauded until their patrons realised the concealed messages in their work, or the patron has seen the artwork as warranting persecution because of the dangers the messages can carry for those in the establishment.
None of this needs to be explicitly constructed like graffiti but can emerge through the painter’s unconscious workings. Striking a balance can be difficult but art history is littered with examples where the social message has been mined out of works after time has passed.

My dark view of the forces at large in the world underlies my creativity. My paintings reflect that whilst I also try to express my love of the natural world, its colour and vibrancy