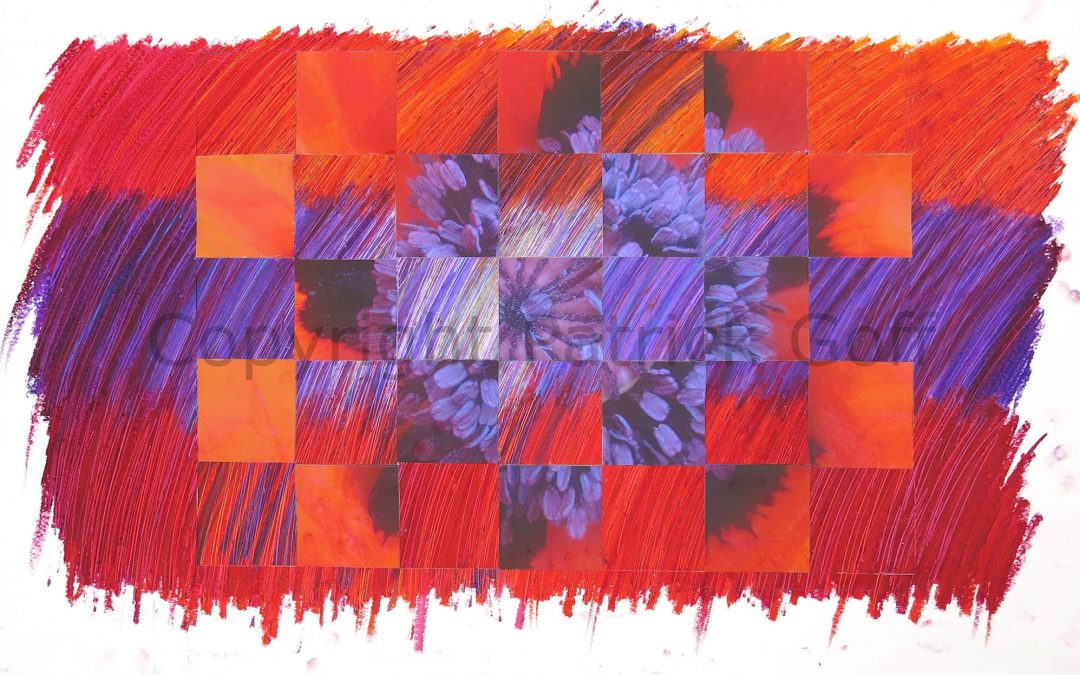 They were used in industry to tease out threads from wool for spinning. Using photographs and drawings I am teasing out ideas about expressing their structure through colour on both canvas, and if I can figure out a simple way of doing it, in 3D too. I have been walking to regrow muscle and strength after the events of the last three years and have become more and more fascinated by the minutiae of landscape, both as a gallery of art and as source material. Monet had his lake, I have my cliffs.

My computer is a digital version of the Kurt Schwitters’ Merz barn as I gather images that are starting points for explorations of time and geometry. Schwitters is described (according to Newcastle University’s Hatton Gallery where his surviving Merz now is) as his own movement and how his ‘long and varied career’ happened in visual art, graphic design, and poetry. Schwitters died when I was a year old, but his influence lingers on. 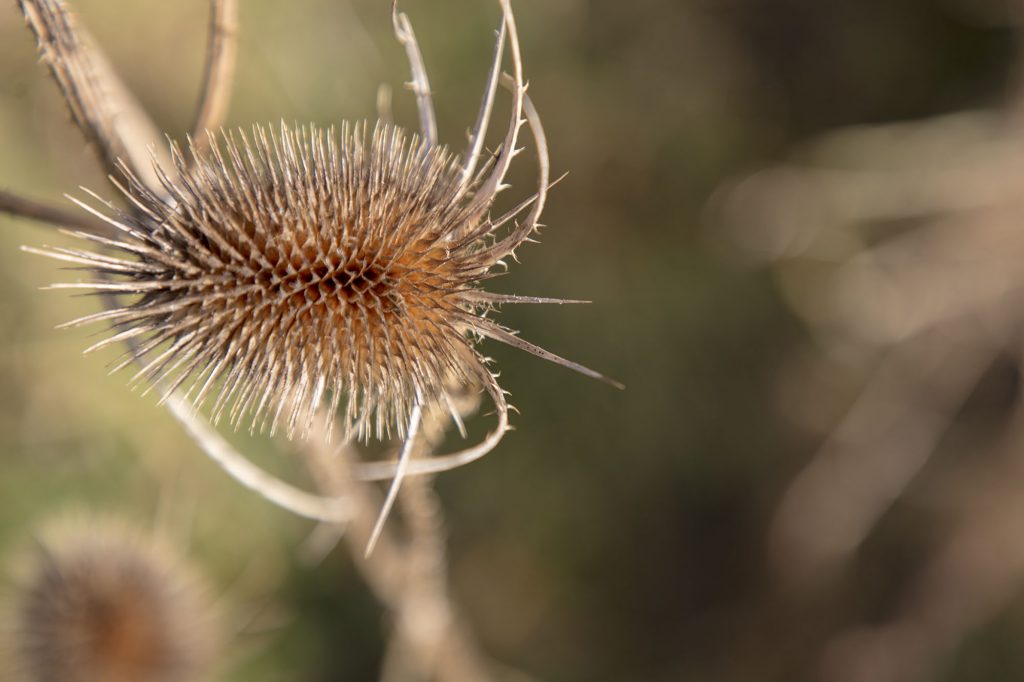 As I wrote in ‘The Outsider’ I have always felt I was an art movement of one – a bowel spasm some might say – and I have followed my own erratic career path in the visual arts, art education, interior design and writing. I’m told art is a ‘minority interest’ these days but there are many factors at play in that statement including the nature of Warhol’s ‘15 minutes of fame’ and McLuhan’s ‘global village’ all of which is enabled by t’internet. Teasing out the significant or important is difficult and there is a need for some cultural ‘teasels’ to comb out the dross.

My current obsessions (temporarily stayed by a surprise trip, a gift from my partner, where I discover the world of César Manrique) spill out into 3D with teasels dripping seeds onto my table, turning into games with toilet roll inners as I think about cylindrical canvases, along with the occasional scampering bug from inside the seeds. Photoshop and pencils become the tools of exploration and I wish I had more microscopic vision as I peer into the cells of the seed heads. The first drawings go in two directions, the more direct one giving me urgency in making a canvas as I finish the last of the ‘Daisy’ paintings. Cylindrical stays as an idea for the moment. 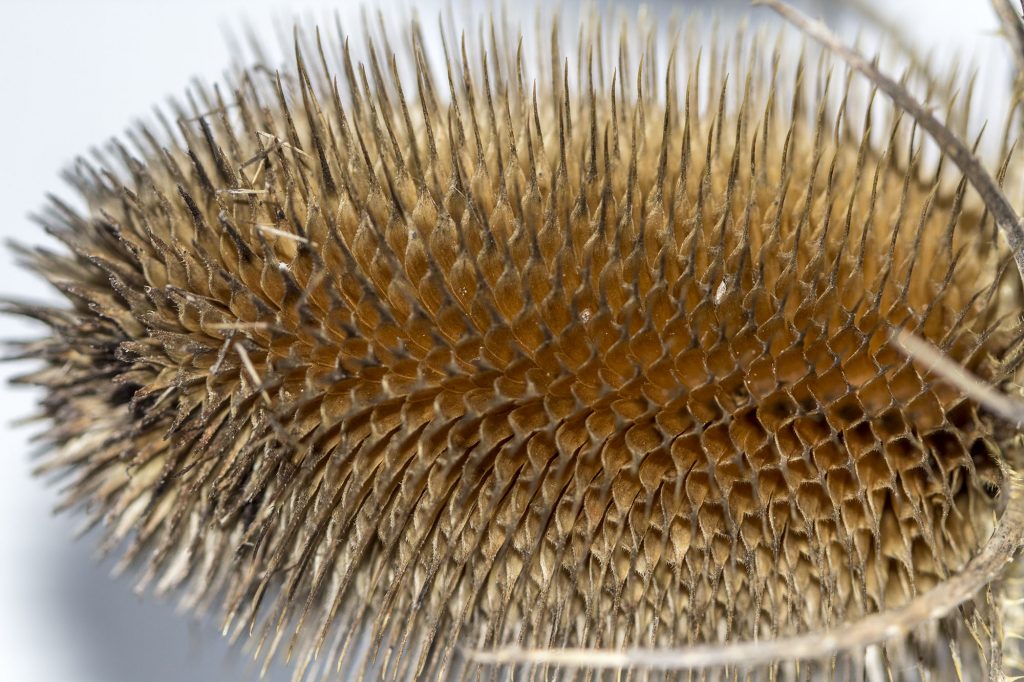 Part of the problems with returning to artistic activity after such a long period involved I other creative works is the need to have goals and direction, and I keep returning to nature for my starting points. It is not three years since I stopped writing and editing HotelDesigns magazine, and the switch from the design world back into my own work has proven surprisingly awkward. My experience of course is complicated by battles with cancer as my series of blogs (listed in Towards Journeys End) has shown. Even without that complication I don’t think that returning to fruitful and free flowing personal myth making is straightforward. I know I am not alone in having to carry out some evaluation of the past to construct a new methodology moving forward. There is much of ‘stop/start’ in this process.

I recently had a very pleasant lunch time talk with an ex-student from a foundation course I taught on over 40 years ago. Recently resigned from high powered education position leading an area of study at the Royal College, she has now returned to further her own award-winning creative practice. We had an interesting discussion around our own internal explorations of our ‘mental archaeology’ as we discussed how it had, for both of us, taken three years to re-establish a viable working practice in our respective studios and minds. 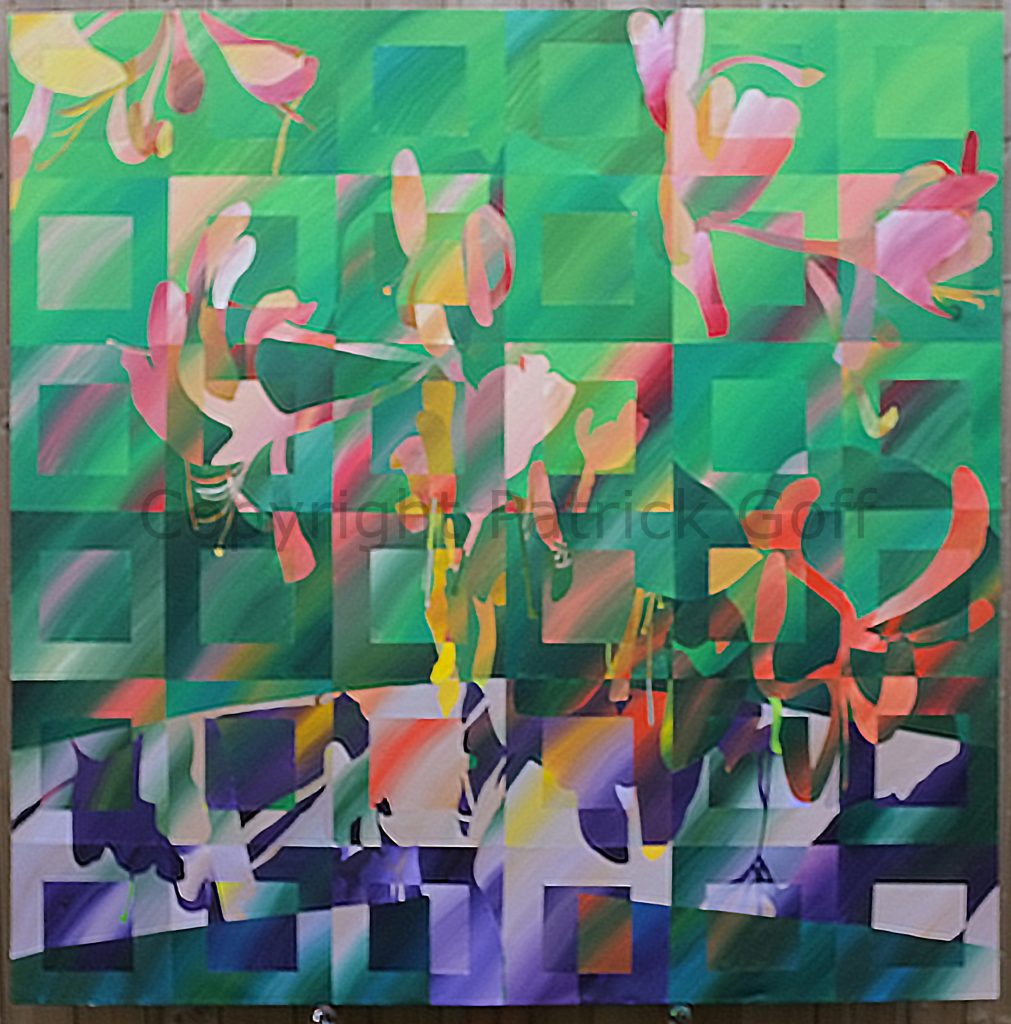 Honeysuckle. Acrylic on Canvas, now in a private collection Tennessee

Another old friend writes to me about running their design practice down so that they can return to painting too. It seems that we all have within us this core dream of being true to our spiritual beings, partly possibly from a growing disenchantment from the growing size/influence of the Hive. The Hive increasingly overwhelms individuality, presenting instead an impenetrable screen of opinion/criticism/appreciation, a wealth of written, aural and project valuations that seem to give equal weight to everything, show little real understanding of the art and put value on very little except money.

Cultural ‘teasels’ I have leaned on in the past – the gallery system, critics etc. – seem to have lost their critical compasses although in many cases they never had them. Certainly, the rise of ‘curation’ has created another layer of partisan interest between viewer and artist, often with little rhyme or reason, and allowing personal prejudices to be pursued often at the expense of artistic quality. 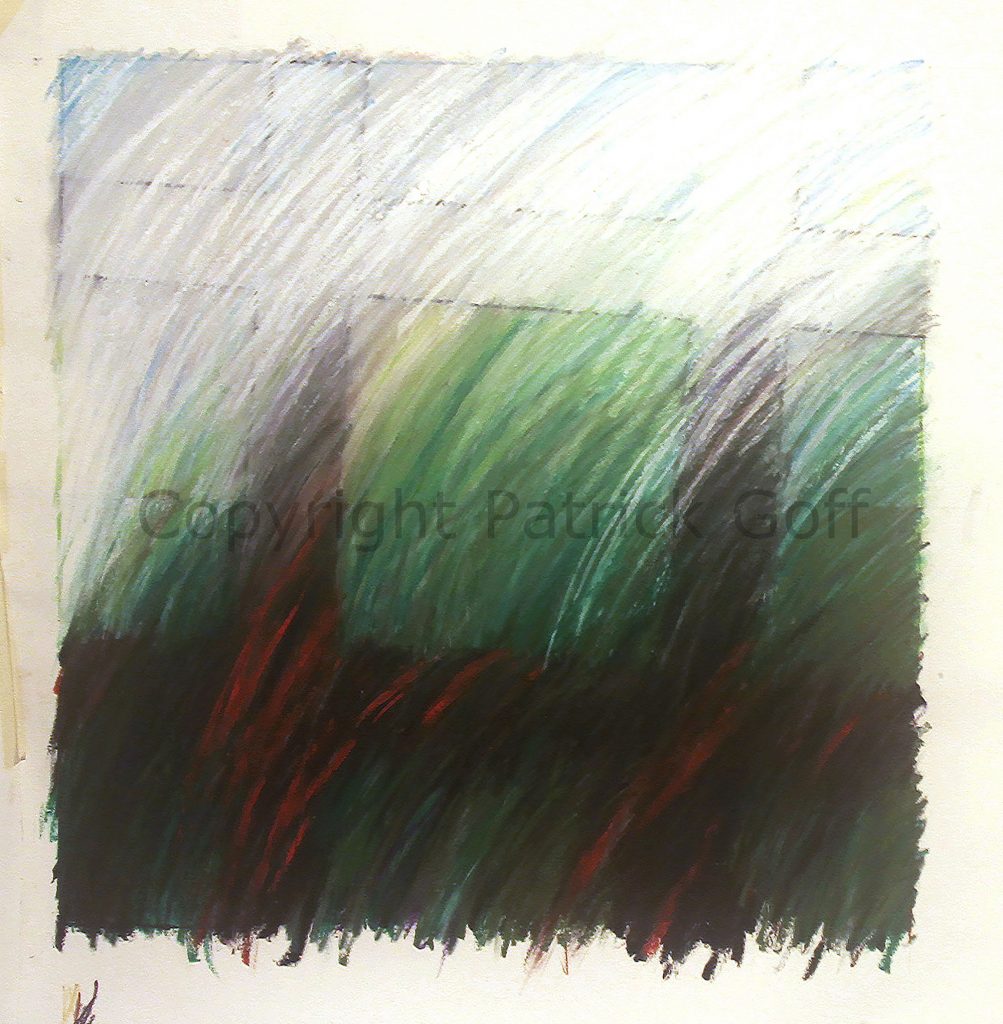 I have used my paintings to show how the grid has been used to breakdown individual images, change the colour of the objects, breaking identity and the nature of experience. I have talked of the way in which the social grid of controls can break down and I think we are seeing that now as people’s relationships to their communities are weakened by social networks. Loyalties that would have been location based are becoming interest based, and the rules that bound together localities are being replaced by a system of opinion without responsibility allowing views to be more extreme without comeback.

Already in taking the teasel as a starting point I can see me being pushed inexorably in that same direction using the native grid of the plant. In parallel I hope to explore more loosely the colour ideas contained in the BRotS series, as I did with the ‘Verdun’ series of drawings (still available if you have a space for a triptych of 3 four foot square oak framed drawings).

I think I have an exciting year ahead once I clear the last detritus of 2017. I hope you do too.

Sign up to receive this blog  in the right hand column