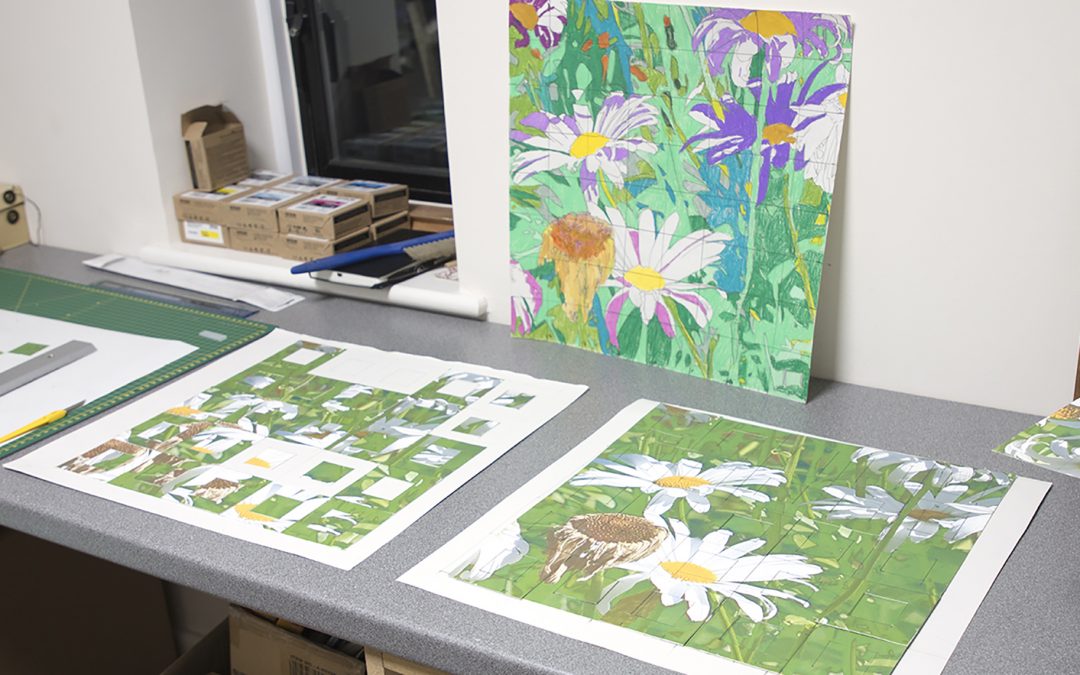 It didn’t start out as an overtly political painting. My subconscious at work perhaps? Maybe, but the process has its roots way back in the flow of work.

My starting point is always something observed. In this instance, the beginnings were sparked by a blue ceramic planter in which the first crocus of spring bloomed. On the edge of the patio the concrete ceramic and earth contrasted with the randomness of the grass in which the daisies bloomed, daisies being a current theme in my paintings.

One of the original series of photographs

Why daisies? I like the central Archimedean spiral of their golden stamens. I like the variety of scale they come in, from the cultivated brashness of the Shasta daisy to the uncultivated innocence of the native English ox-eye daisy (bellis perennis) with its white petals frequently edged in a strong pink or red. In the lawn, the daisy is persistent and random in distribution, its randomness suitable in the chaos of the grass itself.

I worked initially on paper with coloured pencils, then through photography to generate images. A couple of these went into collages and from there into a smaller painting of just the daisy, just a couple of feet square. This turned into a disaster and now languishes in a corner of the studio already with a coat of primer over it. I tried to move it along too fast, rethinking how I order the process, but it failed.

There are many ways to go with the images, some of which have already made prints and paintings, but I wanted on this occasion to play with the contrast between constructed and controlled area planted with crocus against the random chaos of the lawn. The collages made me aware that the directionality of the mark, the hand gesture of the brushwork, would work against the chaos of grass. I needed to try something different.

The nature of the brush mark is important. It is the autographic impression of the artist. My technique also allows me to blend opposing colours on the canvas, dragging red over green for example without the two mixing physically. This creates a spatial movement in the banding, and I wanted to flatten the space in areas of the painting this time, so I needed to approach the use of paint differently.

Because of the mark, and its gestural qualities, I find I need a minimum size for it to work. Too small and it all tightens up, too large and the marks loses its importance. I have found that the grid and the square need to be within a range that allows mixing and blending of the paint at the right scale. I have experimented with squares up to 3’ across but then the balance with the imagery changes negatively. It is a complicated game. The six-inch square works well, so determines the scale of the canvas.

Working out the size of the canvas can be a complicated process. In this instance, I was playing with the rectangle, looking at the relationship between the size of the curve of the pot and the nature of the two areas of plants. In the end life threw a random event into the process, and an existing blank canvas in my store resolved the problems for me and all efforts to make the curve work within the parameters of a golden section rectangle went out the window.

Techniques at the top of the canvas

I saw the key challenge as being to make the painting work as one, not allow the blue of the ceramic curve to break it into two paintings on one canvas, whilst still wanting to keep the sense of the blue separating the ‘constructed’ from the ‘natural’. As the painting developed the fight between these areas became more pronounced. As it did so it began to become a simulacrum of the fight going on to balance out relationships outside the studio. Two thirds of the way through the piece I began to think of it as the ‘Brexit’ painting.

It was a tough canvas for me. So much in it that was experimental, new, and controlling and creating progressions of colour across the surface much more difficult with differing techniques than I had previous anticipated. I played with how to mix colour without changing it. So, a kind of sub-pointillist approach of marks of different colour one on another was crudely implemented. I layered colour and cut into it with different implements. I tried dragging paint rather than brushing it. As I worked down the canvas different approaches were tried in different areas, all within the normal set of ‘rules’ I have for working.

It took two weeks of work on the canvas to produce a painting that I regard in some ways as quite ugly, whilst being delighted with how it works. Rather like the process of leaving the EU. The two areas of canvas each have their own approach, their own ‘soul’. Each work in their own way, each appeal to a different sensibility set. Maybe the next step is to create a diptych, in which the two areas can be equally successful within their own clear identities…

Perhaps I should take a vote from amongst those who view my work? Ha, not likely!