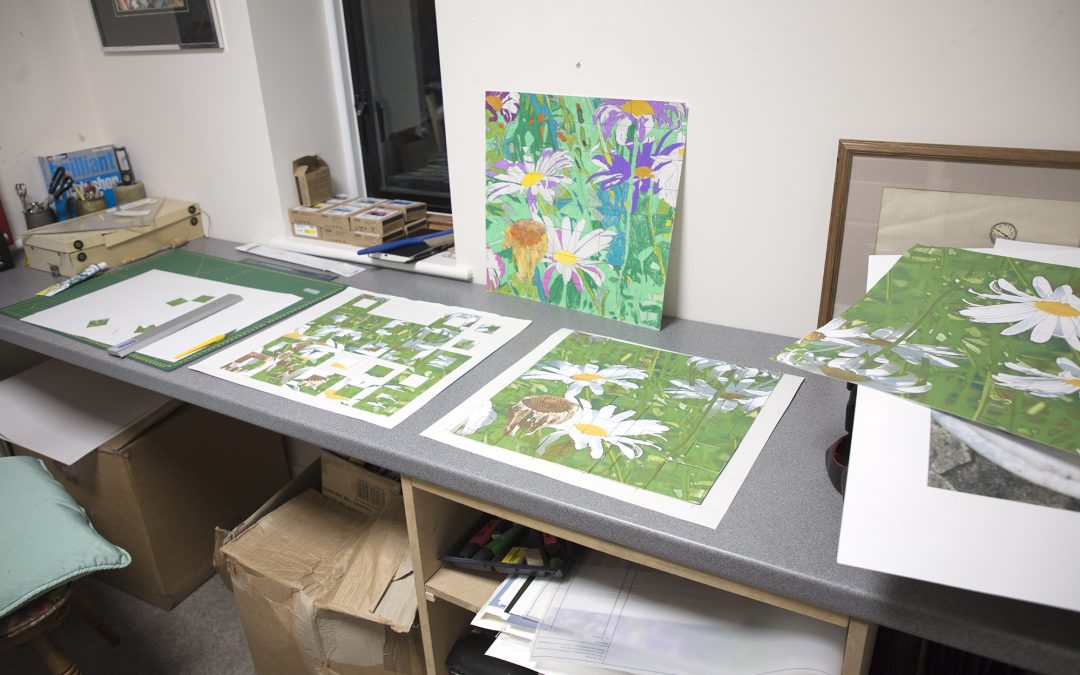 We live in what all the pundits refer to as a ‘rule based world’. Whether talking about Putin and Russia’s assertiveness through asymmetrical warfare as in Ukraine, or anarchic demonstrations of the kind seen in major western cities, our rule based world is under threat from those who would destroy it. I believe that the rules themselves are also a threat to societal wellbeing. Rules are there to make us live in an orderly fashion. Growing out of societal norms and religious beliefs, many rules are worthy and simple. ‘Thou shalt not kill’ for example.

Recent events reveal that many people see the rules as a means of protecting the position (wealth, power) of those at the ‘top’ of society. Many also believe the rules prevent them living a ‘free’ life. Some talk of living ‘off the grid’, meaning independent of society, although this is an illusion that breaks as soon as they need a hospital. Thus, the rules themselves carry the seeds of rebellion, much as parenting can set son against father, daughter against mother. Artists frequently live to challenge the accepted view of the world, often using technology as well as imagery to make their challenges. From the pursuit of Caravaggio through to the UK’s Obscene Publication Act prosecution of galleries showing Oldenburg prints in the 1970’s, those charged with enforcing the rules have pursued artists when they have offended or threatened the established order.

Today many artists exist to protest. Some visually in a way that is recognised as art, such as the cartoons of Banksy, others barely differing from protest banners such as Robert and Roberta Smith’s sign-painted boards. True revolutionaries in the arts are rare, and I would include among my favourites Monet, who’s vision saw what others could not see and challenged the accepted view of the world, and Hockney who’s intelligent explorations of perspective and colour challenge visually in the same tradition.

Many others stretch our visual understanding of the world. Some through a taut pictorial construction such as used by Hopper, others through their fracturing of the visual world to reflect a mental state, such as the Cubists or Vorticists. It is from this last that I draw inspiration, alongside the ‘Op’ artists like Vasarely and Riley, in my own view of the way rules distort and change the patterns of life. One of the paintings most influential on me in this respect is Bomberg’s painting ‘In the Hold’. This painting, of men unloading sacks from a ships hold, takes the rules for constructing a scaled-up image and includes them in the process of making the image and the finished painting. My starting point is the squaring up the grid traditionally used to transfer accurately a small image onto a larger canvas, much as Bomberg retained the grid in his imagery. Making the drawing on canvas at a larger scale, in the current case making the drawing go from a foot wide onto a canvas 4-foot-wide, is difficult if the image is complex. Progress is slow with frequent pauses as I work out what will be happening with the paint. I look to make movement across the surface, giving directionality and progression through the elements, much as society achieves purpose and change through time. 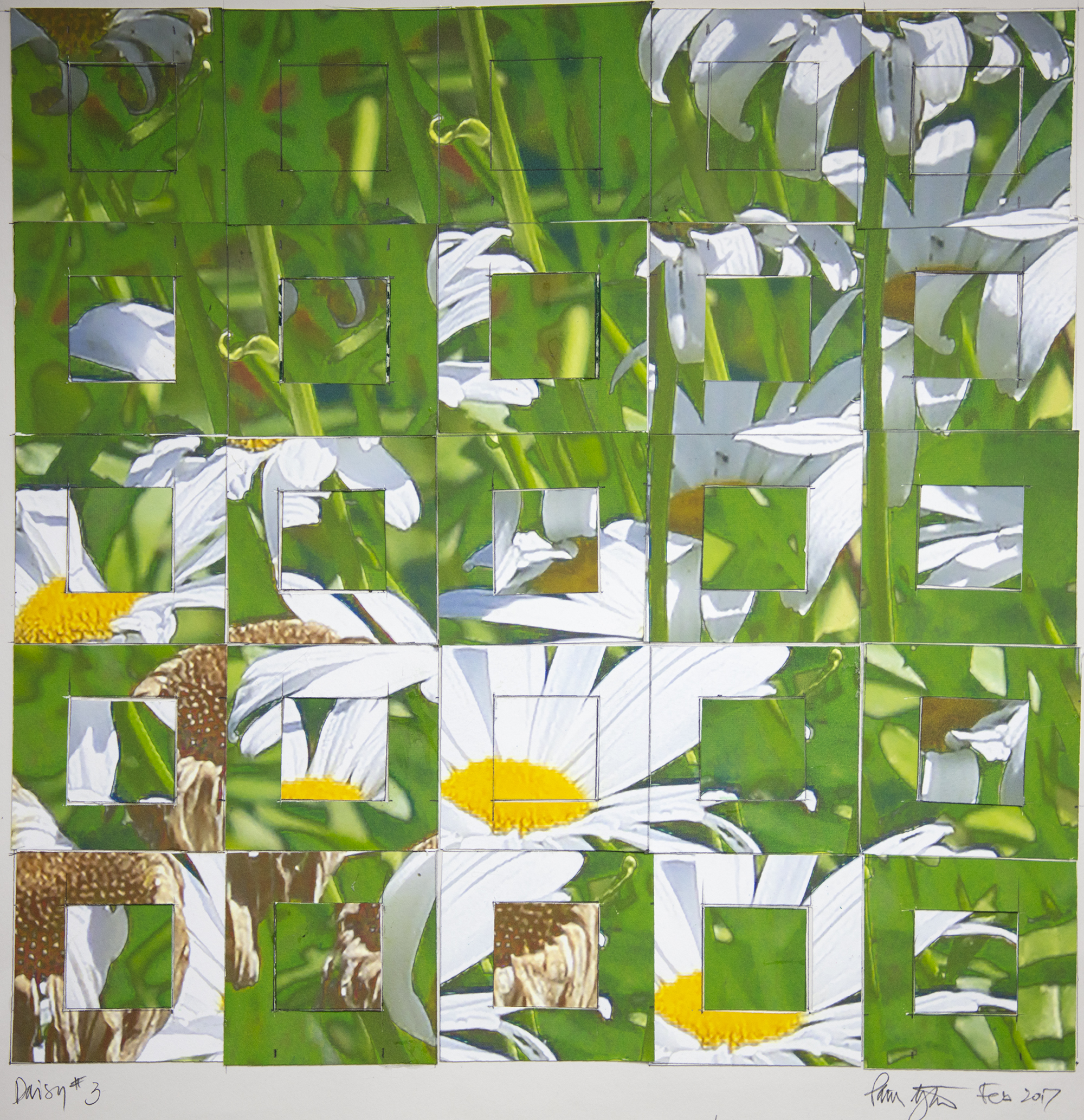 I dislocate the colour from the individual parts of the image, whilst leaving the line drawing reasonably intact. This is also supplemented by mixing paint on the canvas to that random colour and tonal areas brush against each other creating a dynamism and depth to the surface. Colour can be read alone as a spatial element creating jewel like surface that has a sense of depth and movement. In places the colour will vibrate, as atonal colour matches one against the other appear, in other places dark against light will change the reading of the surface.

Through it all the line drawing and image remains intact, although I am starting to experiment with dislocating the imagery with the colour too, looking to see how unrecognisable the image can become whilst still having the clues to identity within it. Throughout there remains the colour field relationship articulating the surface, taking influence from Bridget Riley. Part of the preparatory drawing on the canvas

“No man is an island,

Every man is a piece of the continent,

A part of the main.”

I am conscious of being part of the artistic ‘stream of consciousness’, one small piece floating in a river of visual creativity, affected by what has gone before. I am a product of my time, I acknowledge my influence. I have written before about being an ‘outsider’ socially, and this too is a part of the inheritance that is in my work.

As a part of society and recovering from cancer, I am also conscious (again, to quote John Donne ‘For Whom The Bell Tolls’) that

PERCHANCE he for whom this bell tolls may be so ill, as that he

knows not it tolls for him; and perchance I may think myself so

much better than I am, as that they who are about me, and see my

state, may have caused it to toll for me, and I know not that. The

church is Catholic, universal, so are all her actions; all that she

does belongs to all. When she baptizes a child, that action

concerns me; for that child is thereby connected to that body which

is my head too, and ingrafted into that body whereof I am a member

We all belong. When chaos and disorder threaten or, even, occur, then change results. Current events show how those oppressed by rules can use the orderly rule based process of the state to change the world. The demagoguery of politicians or individuals of conviction can still change the world unpredictably. This process I mirror in my paintings. In an orderly way, I use a rule based approach to create images of chaos that in turn take on their own order and beauty.

The search for beauty is in my everyday life, through photography and drawing and taken forward into the paintings. I hope the demagogues are taking us forward into a world of new beauty. It may be turbulent and a struggle but eventually we must see a new set of rules supplant the old order, a new sense of beauty supplanting the old. I will continue to reflect my delight in man and his works, in the wonders of nature and our relationship to it. It is my chosen task.

Death be not proud, though some have called thee

Mighty and dreadfull, for, thou art not soe,

For, those, whom thou think’st, thou dost overthrow,

Die not, poore death, nor yet canst thou kill mee.

From rest and sleepe, which but thy pictures bee,

Much pleasure, then from thee, much more must flow,

And soonest our best men with thee doe goe,

Rest of their bones, and soules deliverie.

Thou art slave to Fate, Chance, kings, and desperate men,

And poppie, or charmes can make us sleepe as well,

And death shall be no more; death, thou shalt die.

You can buy my work from my Gallery