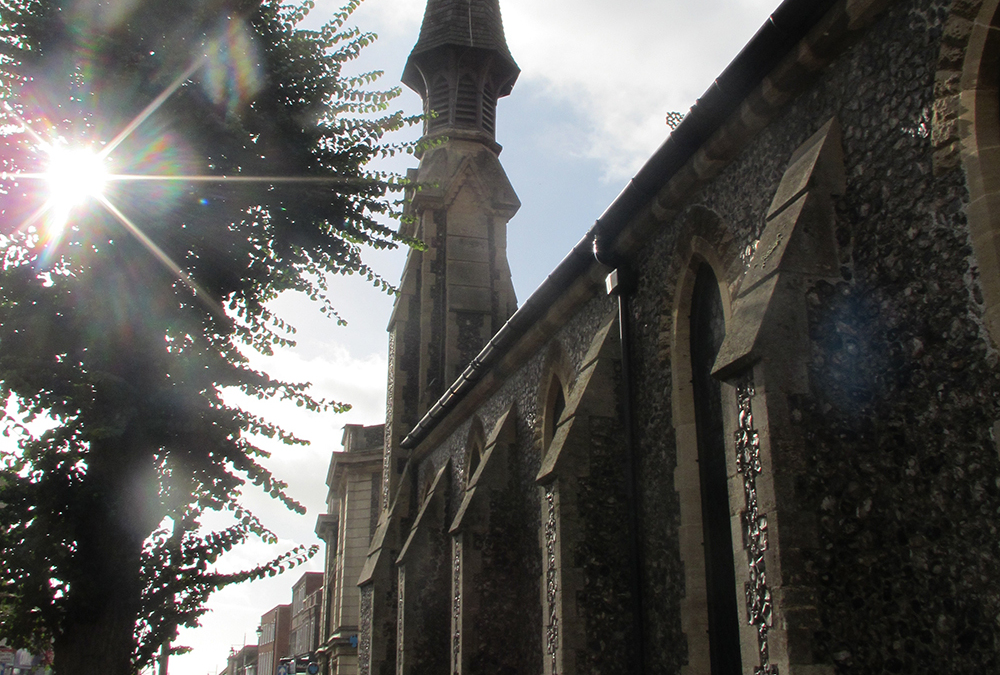 Seaford is an old town. The church was built about 1090 by William the Conqueror’s brother-in-law, who became the boss here after the invasion. (It was not the last invasion by the French – they last landed in 1752 in Fishguard when they reputedly surrendered to Welsh housewives, mistaking their red cloaks and black tall hats for Guardsman uniforms). Part of the seafront is known as the Buckle after a 13th Century boss was awarded the buckle of a kings belt for helping to the capture of the French King when 8,000 English and Welsh men defeated some 25,000 French and Scots at the Battle of Poitiers. So this old town is no stranger to battles from Roman through Saxon times to the destruction of World War 2.

Monitor, weigh, instruct, even on occasion bully but my lady was determined to make me fight. She takes the honours

Today saw me celebrate a new small victory, one win in a war that is claiming more headlines daily, but in which many of the victims do not even realise they are fighting and losing. This was is the war against diabetes and obesity, a war built on our addiction to convenience and laziness, a war whose front line is the pub, restaurant and supermarket; a war where individual battles are won and lost in the domestic kitchen.

Seaford’s high street has been the scene of battle before, lastly in 1940 when a Heinkel bomber dropped a full load of bombs remodelling it. Now our shopping street is scene of new battles as independent suppliers of local produce, local vegetables, local meats, local cheeses struggle to provide an alternative to cheap foods from the supermarkets, cheap foods that are bulked out with addictive sugars and high levels of salt. The quality produce is more expensive weight for weight, but they don’t sell in larger quantities than you ask for, and you are not paying for the additives you don’t need and that may ultimately shorten your life.

My part in this battle is small – as are all parts. This war is fought by each of us individually, won or lost individually. The battle ground is our health, and how long we are likely to live. I like my life, so when I was diagnosed as type 2 diabetic is was a shock. I enjoyed living ‘high on the hog’. I enjoyed top restaurants, fine wines. There is nothing wrong with enjoying these things – but their enjoyment needs to be moderated, and modern lifestyle means we enjoy rather more of them than our forefathers ever did. Type 2 diabetes, I was told, would inevitably become life threatening if I changed nothing, leading possibly to my needing daily insulin injections and for sure shortening my life. Side effects can include amputations and blindness.

The seriousness of this only sank in when I was asked to take a blood sample and process it for a sugar count not once in a while at the surgery but daily with a little kit at home. I saw the fear in my partners face. Recently the doctor told me my partner was determined to keep me alive. Well she did a great job. Because my victory is her victory too over type 2 diabetes. Today it was confirmed that I am now clear of all signs – not even qualifying as a pre-diabetic.

The chemists shop dates back to 1855, with original lantern sign

Diabetes is linked to excess. It can be turned around  through diet and exercise. If you have type 2 all you need is to stop being self indulgent, lose weight and exercise, eat less but better. The closest thing to a magic bullet is oats. Porridge in the morning, 30 grams with some fruit such as banana, redcurrants, blackberries or fresh raspberries is the closest I have found to a magic bullet.

There are really no magic bullets in this war. Thousands of individuals need to fight personal battles. My battle is not over yet. I need to lose a little more weight but the real thing is to continue to eat healthy. My palette has changed and my taste buds revolt at many processed foods now. Most chefs use far too much salt.

I have discovered joy in walking the cliffs here, and walk to town rather than using the car. It is all curiously old fashioned. Foods my grandma would recognise. A lifestyle in tune with this town’s history. Funny old place, Seaford