There were only half a dozen cars at the barn. The sky was bright on the left, grey and a sullen blue black on the right. I hesitated, wondering whether discretion was the better part of valour, but then lifted the cameras from the car and set off down the track towards Cuckmere Haven. The wind blew patterns in the long grass like the pattern of waves, and through the tangle of under-brush around the old wartime track I could see across to the Seven Sisters and the huge breakers which, as it was high tide, were pushing the water upstream on the Cuckmere River, like a mini Severn Bore. 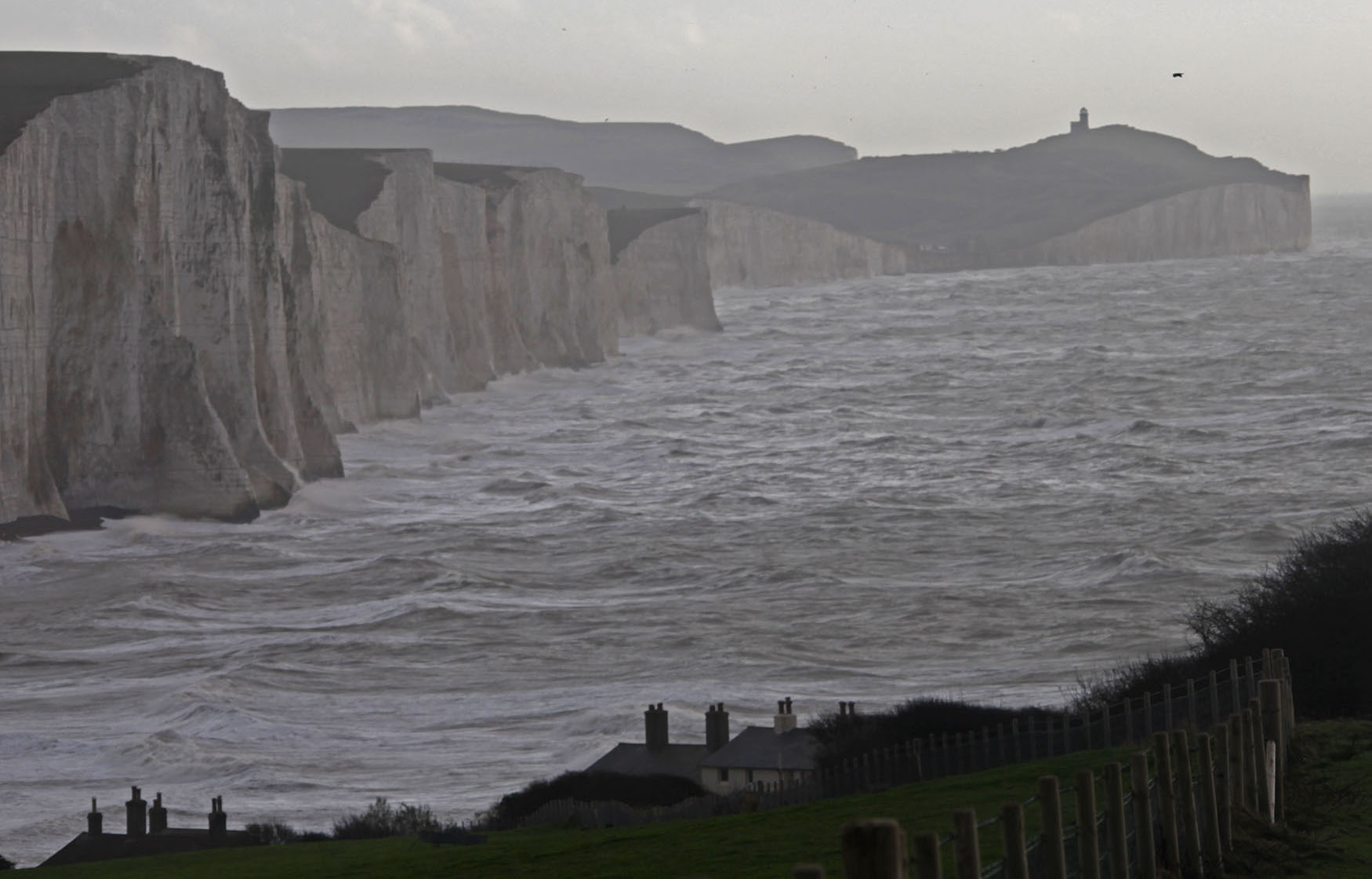 The gate at the top of the track was, unusually, held back open. I walked through wondering briefly if I could cheat and take the car down but thought, knowing my luck, it would be locked when I came back. As the track sank between the banks of scrub trees the clatter and rattle of branches, the roar of the surf and the noise of the wind made an unholy symphony of sound to batter my ears.  The gale made it difficult to hold the long lens still, so I used both cameras, using fence posts to steady myself from the unpredictable gusts with the long lens and my body with the smaller.

The gulls were taking shelter from the stormy winds , gossiping by the Cuckmere

From time to time I saw a small flock of birds over the Cuckmere, not gull as they were all congregated on the water meadow to the side of the Cuckmere.  I couldn’t make out what bird the flock was, but maybe I’d see them when I was closer to the base of the hill.  I walked on down, trying to capture the cliffs and the waves breaking against their bases. Belle Tout and Birling Gap were only to be seen palely through the spray. Briefly a pair of walkers were silhouetted on the Seven Sisters but the normally busy paths were empty and the gale gusted sea spray high across them. 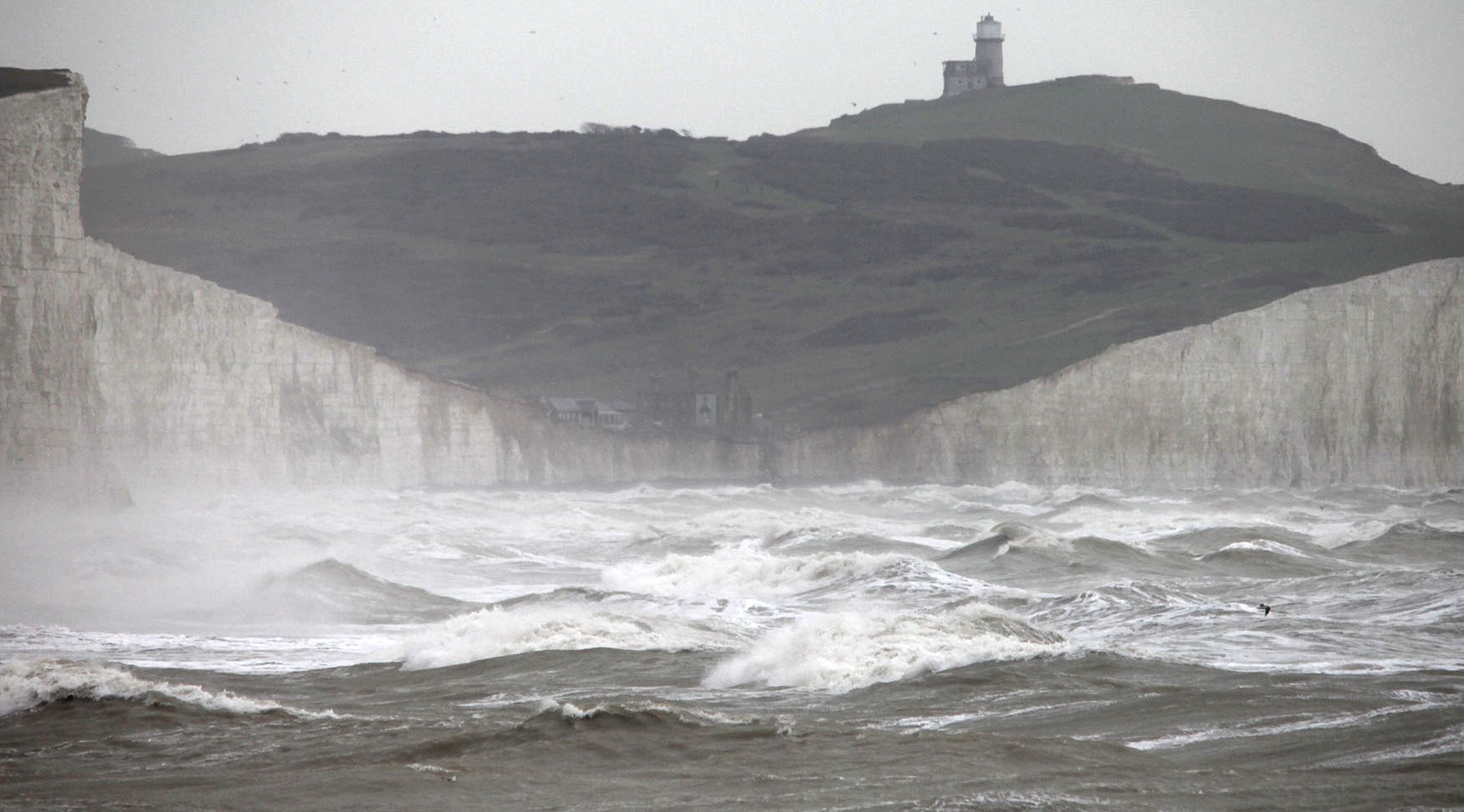 Looking across to Birling Gap

A pair of headlights suddenly shone bright at the base of the hill and I saw the yellow arm of a digger pushing gravel as the Environment Agency boys pushed gravel down around the sea defences of the Coastguard Cottages. The digger bucket was being used to push posts in at the side of the path and a workman struggled to attach warning notices, occasionally disappearing in a cloud of sea spray. Out of the lee of the shrubs the wind plucked at my coat, threatening to take my cap and coating lenses with sea salt and raindrops. 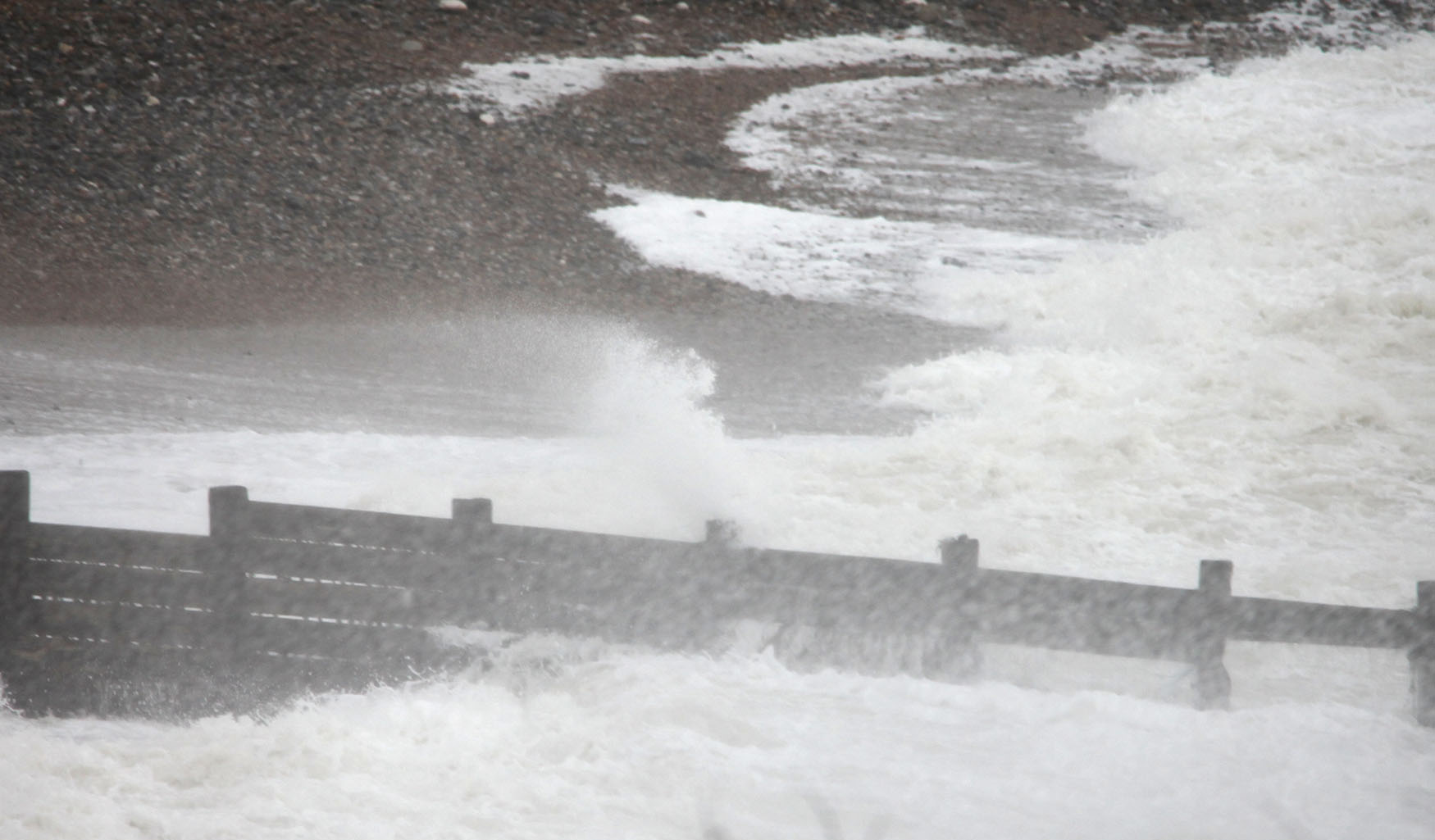 I imagined how the Coastguard buildings must be shaking under the blasts of the gales. The surf was breaking above the cliff edge at its lower points, and the sound was deafening, the force generated by spray and wind only adding to my determination to try to capture something of the violence on the camera, maybe for later use in the studio. For a while I just stood, not wanting to go to the beach because of shingle shovellers and their heavy duty vehicles, obviously the reason the top gate was propped open.

There – there was the flock. They were oyster-catchers and I was able to get a few images, just as a stinging blast of freezing rain hit my face. One camera went into a bag, the other into the large poacher pocket in my coat I trudged back up the hill to the car getting steadily wetter, exhilarated by the gale, trousers soaked but happy that the walk had at least worked off some of the indulgence of Christmas, and with some interesting images to play with.

See my art here in the gallery or via Facebook