Seduced by the Seven Sisters Again 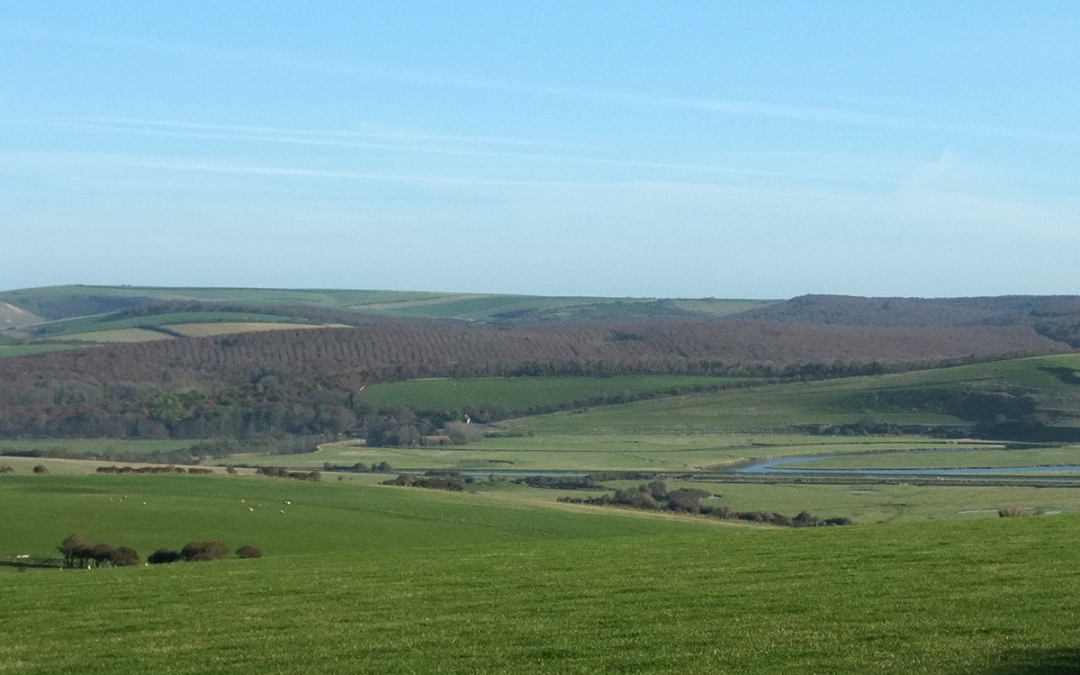 It was such a beautiful sunrise, and unusually for mid-November it was followed by a gloriously sunny day, almost Mediterranean. Now the leaves are gone from the trees I can see the headland easily from the house so after my morning porridge I took my camera for a walk over Seaford Head to Cuckmere Haven.

The brown stain of manufactured forest

Even from the car park the view of the downs is stunning, the serried ranks of trees in the Forestry Commission land making an auburn stain on the Downs. I walked towards Seaford , passing the flying saucer landing pad and started to walk the reverse cliff walk to Cuckmere Haven. I’ve not walked this bit before and it was a delight to watch as the views changed.

The fishing boats were out in force on a calm sea burnished by the low sun. Gradually the coast came more and more into view, passing the nesting ravens on the cliff faces. The Environment Agency is considering letting the sea defences decay here so that the Cuckmere Valley becomes a more tidal marsh, an interesting proposal as the sea is gradually removing the concrete of old tank traps as well as sea walls. The sea is stained white by clouds of chalk falling into it, leaving gnarled rounded white lumps along the coastal shelf.

Sunlight glittering silver on the sea

The white of the cliffs also reflects on the water, the sea in an unusual calm today, looking very continental. The sunlight painted colours bright and clean, the skyline tone changing and showing the distant dark shadows of the busy freight ships in the Channel. Nearer the ferry picked its way through the smaller craft on its way from Newhaven to Dieppe, too far away for sound of its passing  to be heard. The only sounds were the cries of birds, robins, other LBJ’s, gulls cries counterpointing  the susurration of shingle on the shore, pushed and pulled, growling, by the gentle waves. Even my footsteps were muffled by the springy turf.

As the tide ebbs patches of sandy beach emerge

At Cuckmere Haven the calm sea was roughened by the outflow from the river, a far cry from my last sighting when I saw waves pushed upriver by a combination of a rising tide and storm winds, almost like  a Severn Bore. Now the tide was ebbing leaving a tangle of colourful nets, chunks of wood and the round white boulders of the last cliff fall alongside speckled grey rounded slabs of concrete smoothed by the waves.

Above the beach sits a small cairn, with poppies in a spark of red on its side. Erected it proclaims, in memory of Canadian boys killed here in the 1940’s, by Messerschmitts. If you pause there, reader, also remember the off duty airmen killed when, returning from a swim, they detonated a mine on the beach. The poppies glow bright in the sunlight and I paused in remembrance.

I am fortunate to have this beauty here, the Seven Sisters and the meanders of the Cuckmere, the rabbits grazing amongst the bushes, birds above. The white cliffs and the valley between them were an easy landfall for aircraft and the beauty carries reminders – pillboxes, the cairn and higher up the remains of Roman and Bronze age forts – that our freedom to enjoy this in peace was won by our forefathers from covetous neighbours.

That said, nowt beats a nice cuppa after a brisk walk.