Blimey, I didn’t expect one photograph to generate this kind of response, but as one person said “it is the silly season”.

In my last blog I talked about the impact of the large sensor in the Canon 5Ds. To begin with I went with my thirst for colour and the images were all about macro photos of flowers, the increased number of pixels not just allowing an extra level of enlargement but also an additional clarity of both image and colour. 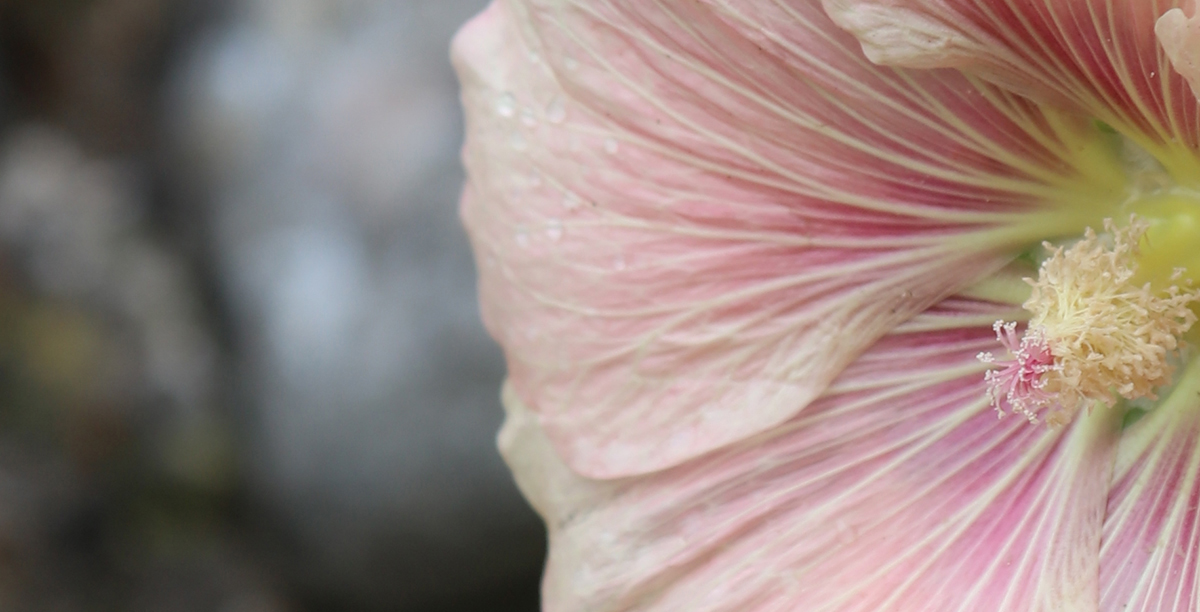 Flint and pink in Seaford churchyard, where the French consul is buried – his name was John Bull.

I had a serious think about the implications for me in my work – as I use photography as a tool rather than anything else, a way of collecting information, for picture making and storytelling. I could easily get seduced into the macro route but wondered what would happen at the other end of the scale, for example with a large telephoto combined with the large sensor, what would I be able to pick out in landscape? 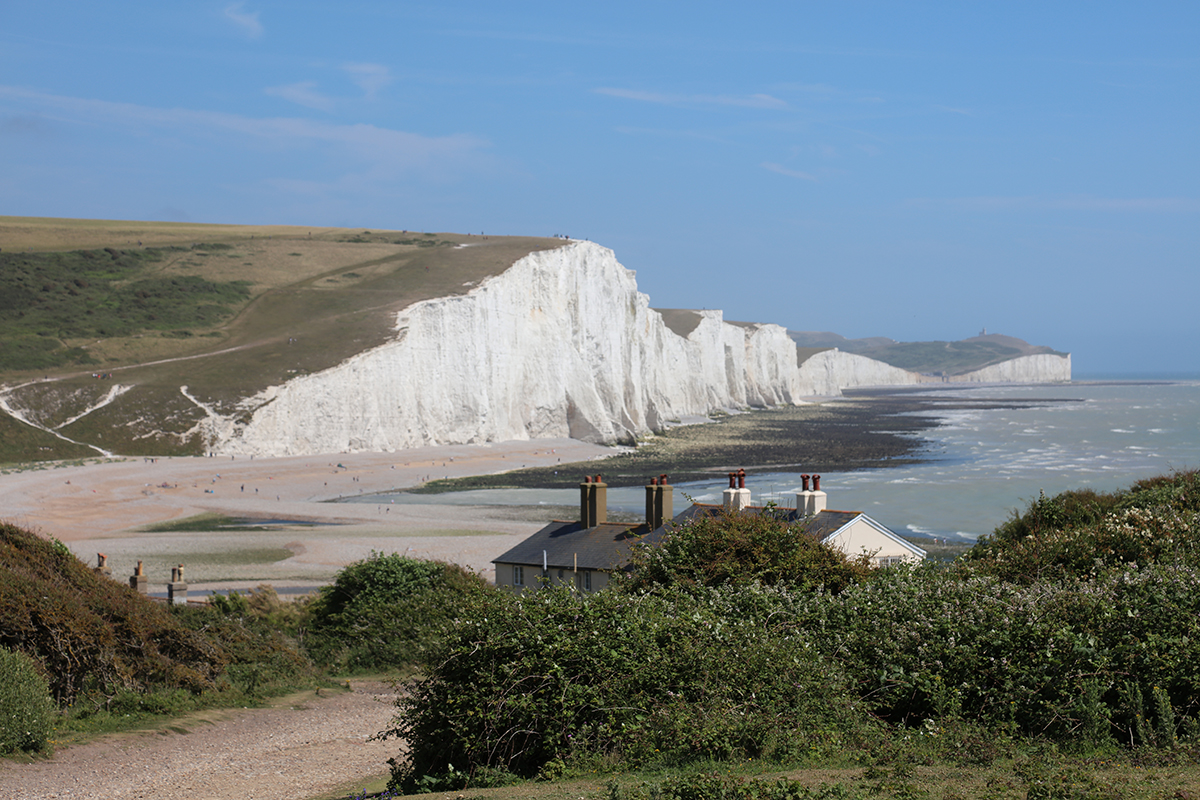 So I am in a testing and trying mode, and long distance is fun, so I decided to look at the stairs at Birling Gap across the bay from Seaford Head. That’s about 4 miles I reckon, to a good test of camera and lens. The lens is the Sigma 150 to 500mm f1.5- f6.3, bought originally in anticipation of another trip to South African wildlife sites.  With the larger sensor allowing for some fairly extreme enlarging before any pixilation creeps in, I was excited to see what it could produce in combination with larger lens. I should say at this point my ‘standard’ lens for day to day and interior work is Canon’s EF 24 – 105mm f1.4. 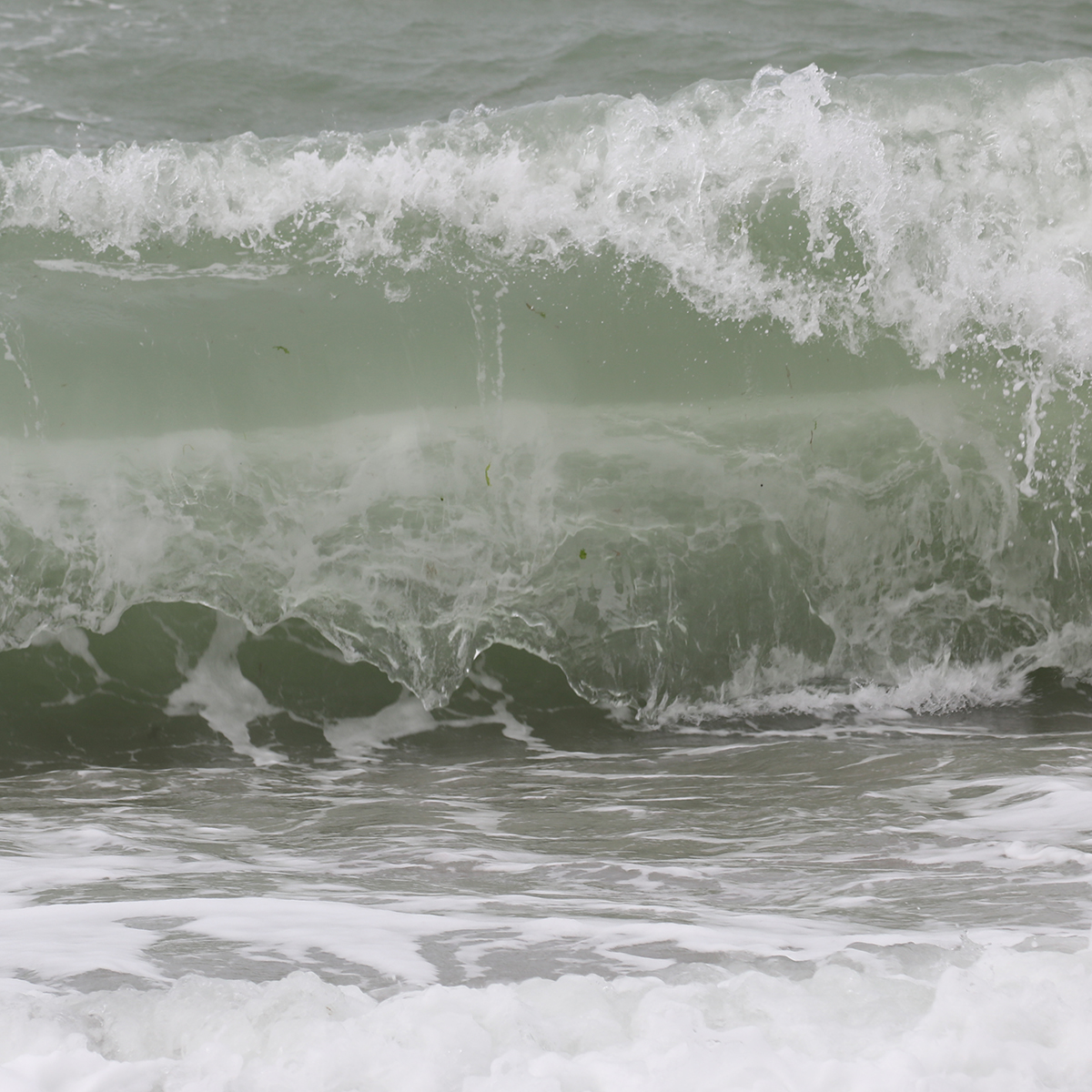 Looking into a gentle wave

Taking both lenses and a monopod is a manageable load to walk with. So, on a happily sunny, if windy day, I trotted off to the cliff-tops. I used the smaller lens to look into some waves with stunning effect, chased a few butterflies and enjoyed the sunshine. I stopped to natter to a couple of artists, declining the invitation to share their lunch box, and pointing the large lens camera combination at the stairs at Birling Gap. Even looking at the little panel on the back of the camera I could see the results were stunning. 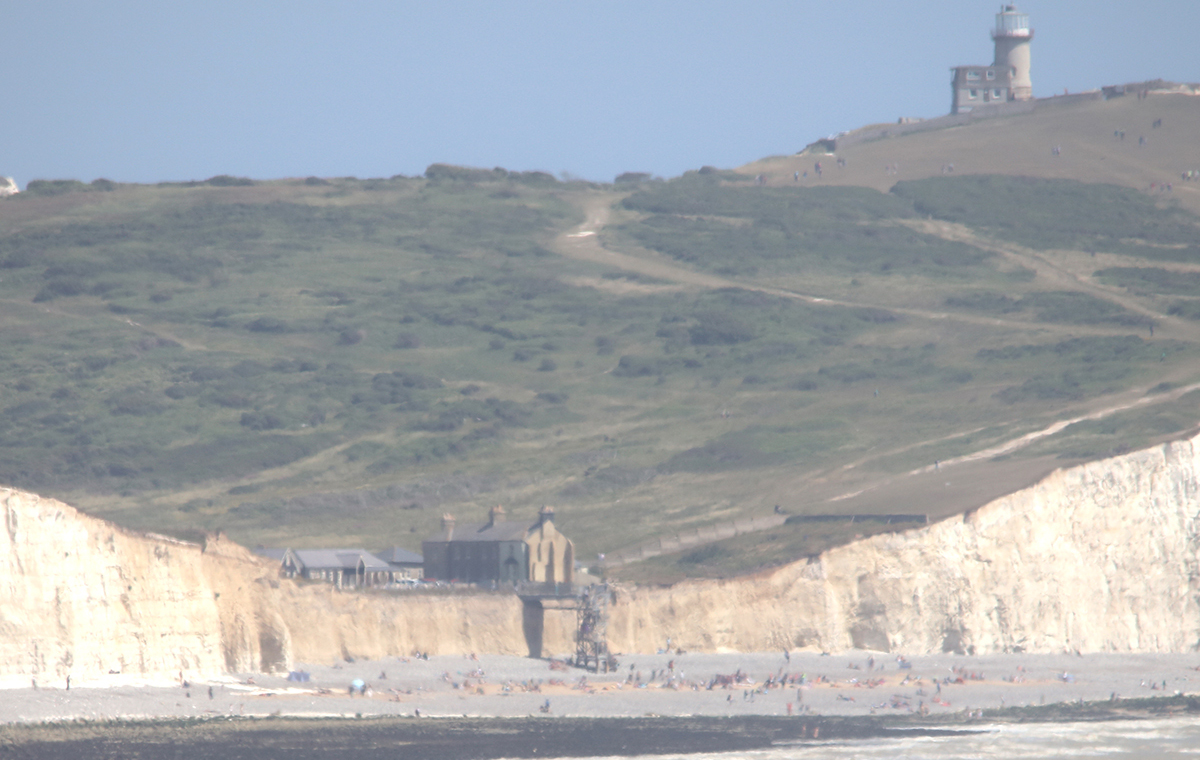 Looking across to the stairs at Birling Gap, where 3 metres of cliff were eroded last year

I wandered further down the track and across a piece of Downland, finally stretching myself on the grass above the Coastguard cottages to look down at the Lowry figures populating the beach and paths of the Cuckmere valley spread beneath me. I used the camera and long lens to catch a few images of families enjoying the pebble and surf, and followed the line of cliffs up to where I captured the now familiar image of the seven girls sitting with their legs dangling over the cliff-top, 300 feet above the beach. Seven sisters on the Seven Sisters?

“Why”, someone asked, “didn’t I do something?” Well they were a mile away on the other side of the river with no easy way across. “Why does it matter? “, someone else asked. It matters that the lifeboat drinks £4,000 in diesel on a call out, and that someone has to put the body parts in the body bag when people go over the edge. On this occasion the risk takers didn’t cut short their promising lives, casually getting up and wandering off. There are deaths every year along this part of England’s beautiful coastline.

After a while thinking I decided to get back my computer and send the image to the local Coastguard in the hope that it would be a warning for others. I also put up a little story on my Facebook page and a couple of images in my twitter feed. I was not prepared for what followed.

The frenzy started when a photographer for the Mirror saw the pictures. Although on a holiday he lives in Seaford and has himself linked into the local Coastguard, so he saw the images straight away. He rang me and persuaded me that the Mirror should have the pics ahead of any other national media, but said it was OK to respond to any local enquiries. From there it spiralled. The phone did not stop ringing. I am not experienced in this despite editing HotelDesigns for 15 years. But then I did that coming out of a design practice without a media background so I had no idea how traditional media worked.

Now I do. I have been interviewed, recorded, door stepped, written pieces for, to date, all the national papers except the Guardian and Independent (because those two are broke and I don’t do ‘owt for nowt’), local TV, local radio, national radio and Uncle Tom Cobley an‘all. The phone rang persistently until in desperation I agreed to MirrorPix taking control of the situation on my behalf. Since then the phone has been quiet and I have my peaceful environment back.

The picture is a warning. The cliff edges are not safe. I went cold when I saw the youngsters. Seemingly they were safe, but on a cliff that retreats from the sea every year (over 3 meters at Birling Gap last year, 2013/4). People persistently take risks. That’s life. On the downside it is death too.

All this and I still have to work out a relationship between the photography, painting, and printmaking.