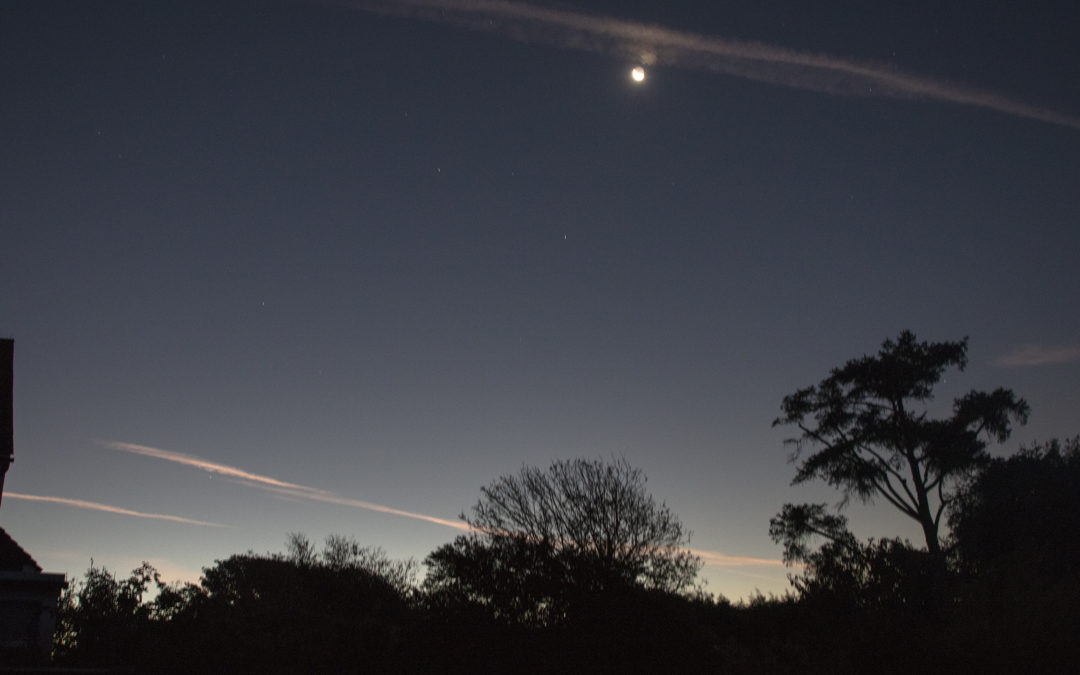 Every morning I take the same photograph down the garden. Times vary between around six until as late as ten, but whenever I’m here the routine applies when I get up. Some mornings it’s a hasty snap as the rain comes down. Sometimes I wait until dressed and wrapped up against the weather, but this being Seaford, with its reputation as the sunniest place in England, most days I’m in my dressing gown. This morning was the dressing gown. 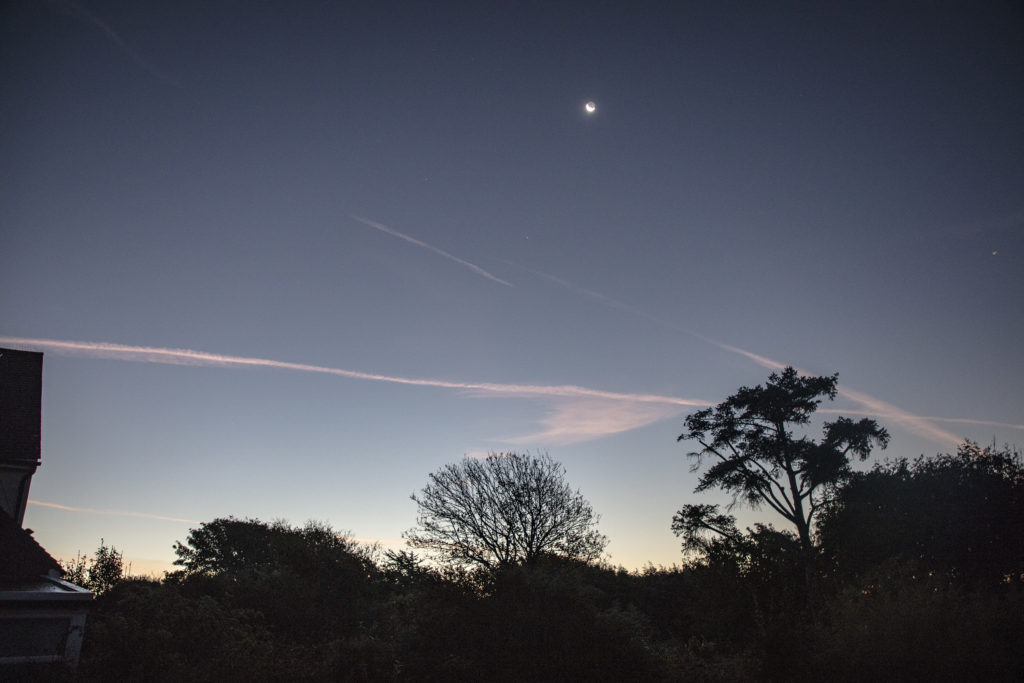 I woke in the dark and lay for a moment in stillness and warmth wondering at waking. Then I saw it was just a minute past six, so I rose and, feeling well (when you get to my age that is almost a celebration in itself) went to my bathroom for the dressing gown. Downstairs to the cat, except no cat this morning, he’s still out on patrol. I’ll feed him soon. As I go to his bowl I pass the office and pick up my camera. So far I’ve turned on no lights, only the glow of my watch threatening my night vision. 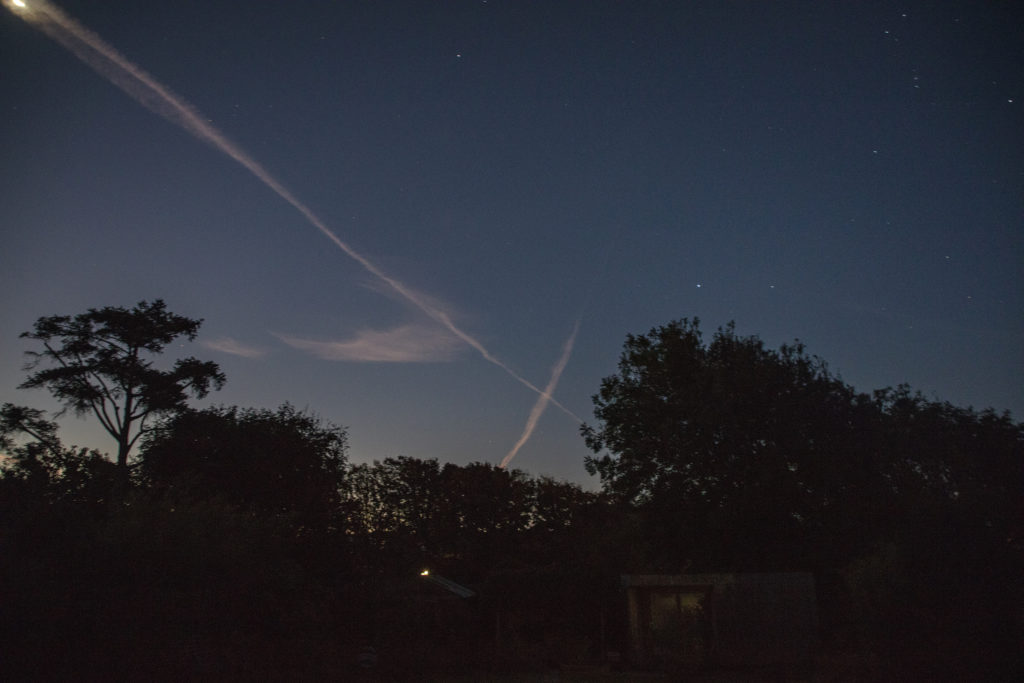 Through the back door into my usual place in the garden. It is still dark, and the moon and stars glow bright. Are those three close together in a straight-line Orion’s belt? I struggle to see the rest of the constellation, don’t know my star charts well enough. To the west the light is growing colouring the aircraft con trails pink. I can barely make out the studio at the bottom of the garden and there is a solitary light on in the school beyond the fence. I am conscious of the light growing as it gets brighter in the west. 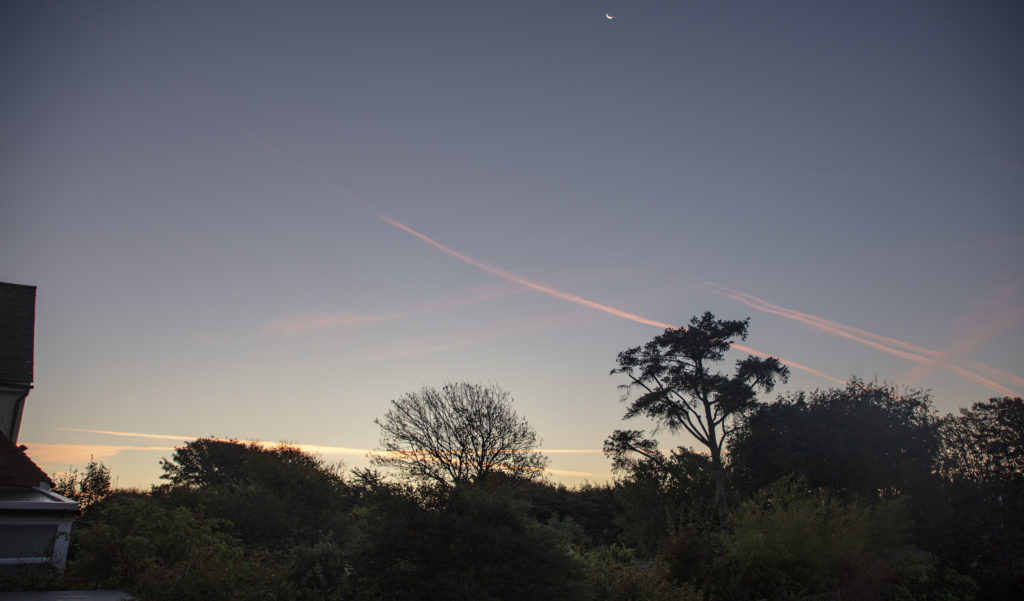 I stand and listen. A robin sings melodically. Four harsh caws announce the presence of a crow. (One is a crow, more than one is rooks apparently). A neurotic blackbird chitters in alarm somewhere, and I realise that in a farther garden another robin is singing in response to the one in mine. The blackbird too now settles in to serenade the arriving sun. I start taking my photo’s. I brace my elbows against my chest and hold my breath for the time of the exposure, life’s too short to bugger about with a tripod. 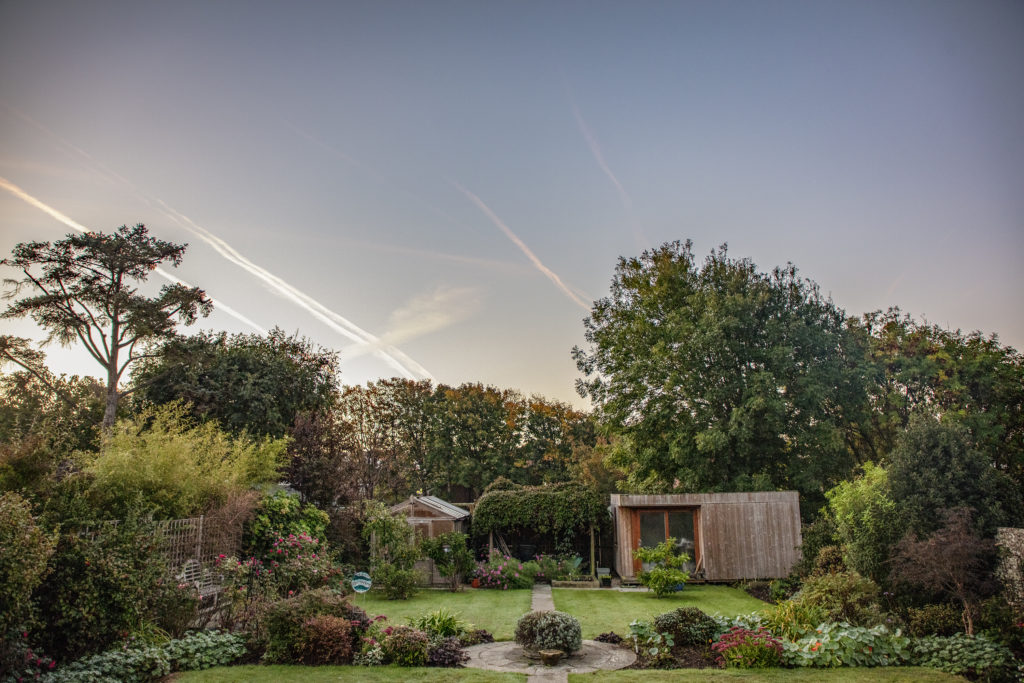 I stand and watch the lights of a high-flying jet pass amongst the stars. Gradually some way behind it a contrail emerges, pink, in the growing light. As the light grows I can see the roses and sedum’s reds colouring the borders, and slowly the green returns to the dark grasses. The black silhouettes of the trees begin to show their green and orange of autumn leaves.

No doubt we will put the clocks back soon and I will have to become more familiar with this light as we shift into winter, although it will soon be too chilly for me to spend the twenty minutes with the camera as I did this morning. It is great to be alive.