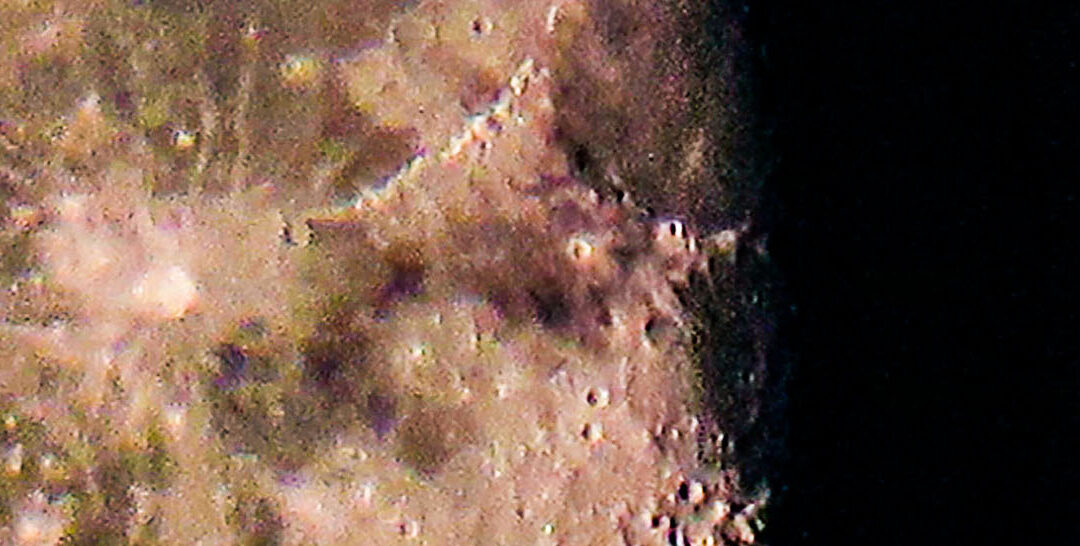 Mama, take this badge off of me
I can’t use it anymore
It’s gettin’ dark, too dark to see
I feel I’m knockin’ on heaven’s door

Several of us on Twitter and Facebook keep a daily visual diary of the changing months. I take mine from the same spot (approximately) in the garden between 0600 and 0700 usually, keeping the commentary down to an amount twitter will carry, occasionally adding a little for Facebook. All before breakfast… and so time passes and ageing continues…day by day… 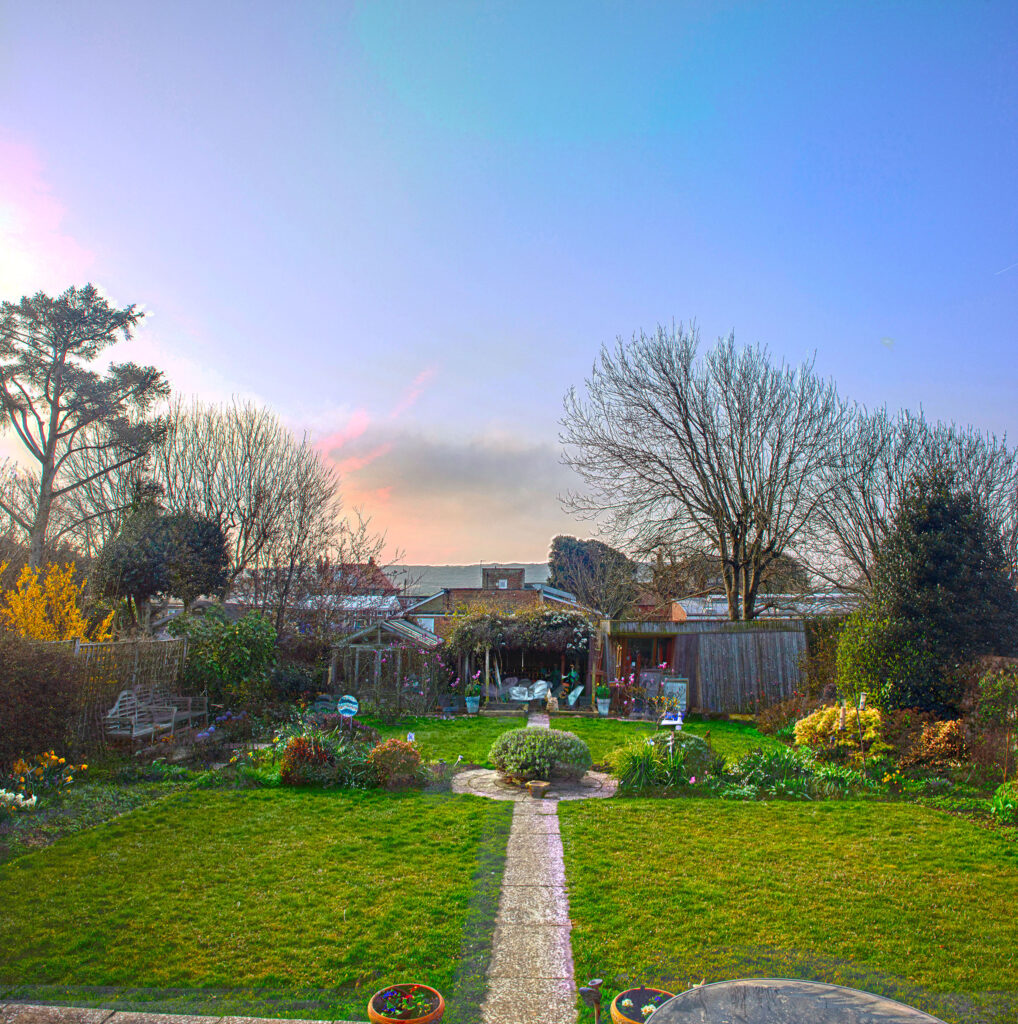 Good morning. The twilight hour, full of birdsong again. Just 8 degrees, frost free and pink tinged mist over the cliff tops as the sun begins to assert its authority over the waning moon. Glorious audiovisual sensation as I sat on the bench in my dressing gown soaking it in. Alive! Ignore the pain, enjoy the show, life is wonderful at moments like this

Good morning. Frost more evident on the grass and in the atmosphere than the previous misty mornings of the last two days. In the mist the moon is barely visible but pulls the greyness around her like a shroud as she melts before the glare of the sun. The king of the day glares through the treetop his red glare suffused into pink before fading to the blue of a clear sky. A night of pain from the spine punctuated by agonising cramps in my calves, which the doc puts down to the spinal injury too. No formal answer to my written complaints, no sign of any rebooking of the ‘urgent’ operation. The NHS is failing me now 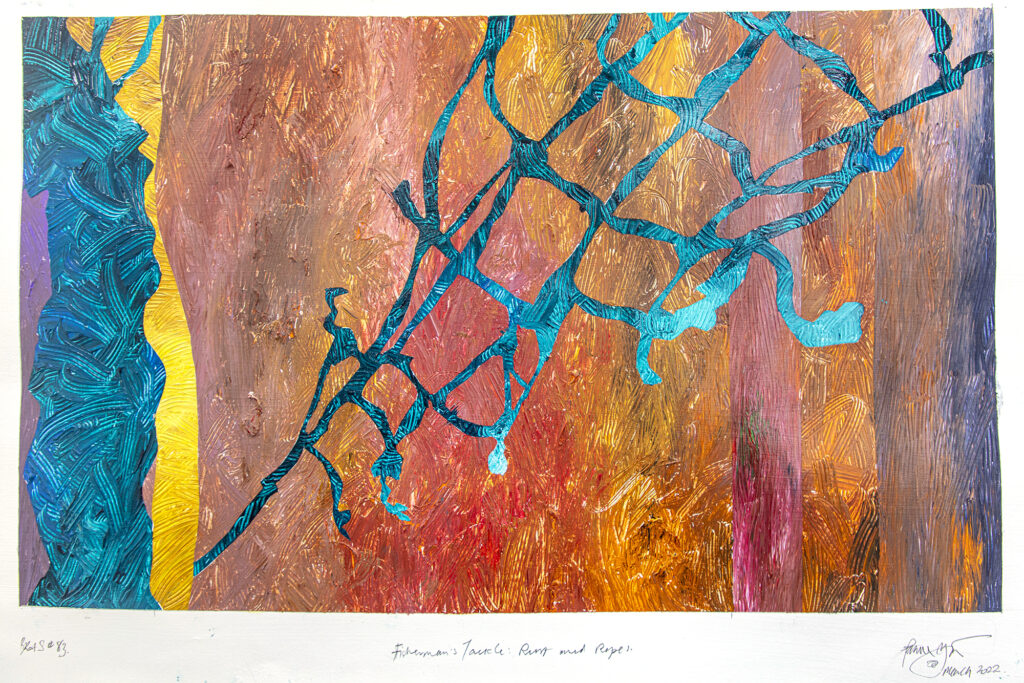 I continue to work. This is BRotS #83from the Fisherman’s Tackle subset. Acrylic paint on primed paper 27×16.5 inches

Good morning. A roseate hue envelopes everything as sunglow replaces moonlight. The moon has fled, the white breast of a gull on a neighbouring chimney reflecting pink in its place as the sun comes in triumph, the golden glory hidden slightly in a haze that has been here every morning for the last week or so. Everywhere is beginning to be parched, we need rain again. At 8 degrees this morning is frost free

As I typed another piece to pressure for my cancelled operation to be tabled, the phone rang. Yes! the hospital offering 19th April! I’m on the list again, yippee! 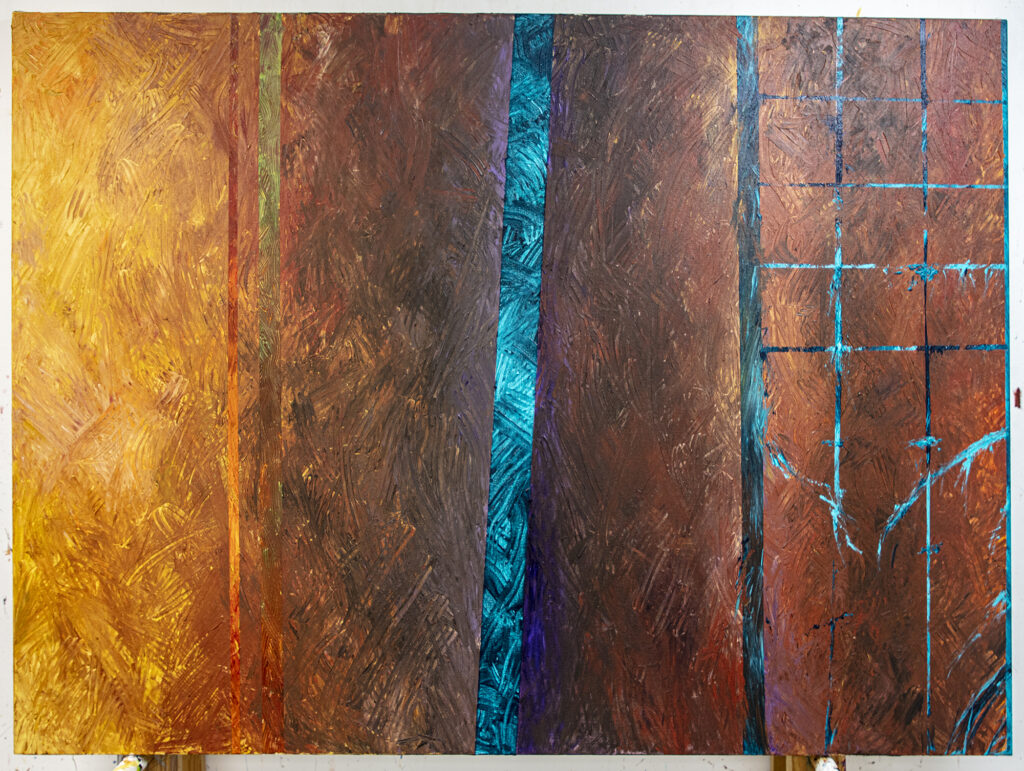 The 3rd canvas in the Fishermans Tackle series. 48x36inches, acrylic on canvas

I sat in the sun digesting the news that my operation is scheduled again, feeling that frissant of fear tingling, soothed by the warmth of the sun. The cat came to join me and I started to relax and enjoy springtime with Putin – no that was ‘Springtime for Hitler’ wasn’t it? Restless to do something but still fearing the impact of studio work on my back I picked up the little camera and wandered down the garden, accompanied by the squeals and cries of the schoolkids on lunch break in their playground over the fences, whilst in the blue sky a Spitfire burbled past. Yes, it was Hitler wasn’t it…

“Frissant of fear”, a friend asked, “they know what they are doing, don’t they”. Maybe but of the 5 operations I have had now, one is no longer done by the NHS  as it was deemed ineffective and another removed a major blood vessel by accident . Not that it appears in my notes mind you, or if it does the new surgeon hadn’t read it. Either way it scares me…

Good morning. Had a really bad night of disturbed sleep so later by an hour this morning . Greeted by the sun, strident in all his glory, throwing shadows around everywhere and heating things up, passing 9 degrees already. The pear is budding up but the apples are still cautious which is wise as we are still likely to see the odd frost – we have had snow in April before now… even, one year, played the opening match of the cricket season in snow… 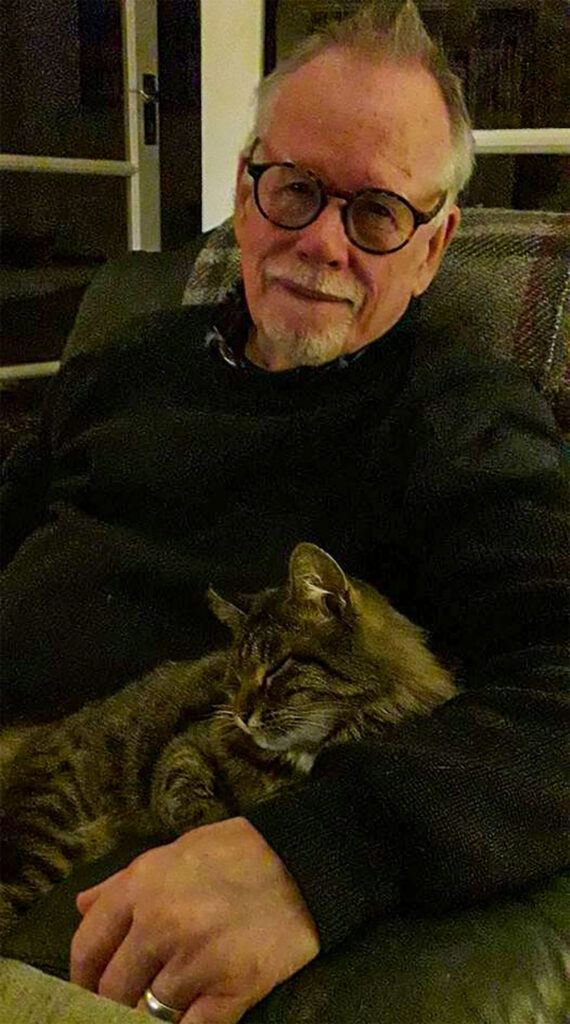 (A quiet Saturday at home for Patrick A. Goff and our lovely Sid. He has a new date for spinal op April 19 and anaesthetic patches for 12 hours on then off for 12. They are helping. I am quiet as well as throat is sore and very tired again. Tested negative though many I know here have Covid. Been clearing out dining room and pantry for decorator on Monday. Too much stuff! (Writes she who must be obeyed) )

Good morning. Did you remember to change your clocks? Such an archaic ritual. Disappointing isn’t it – almost like a signal to retreat back into winter. Slightly colder at 8 but instead of a golden god we get a mist shrouded glowing ball and a chill breeze soughing through the shrubs 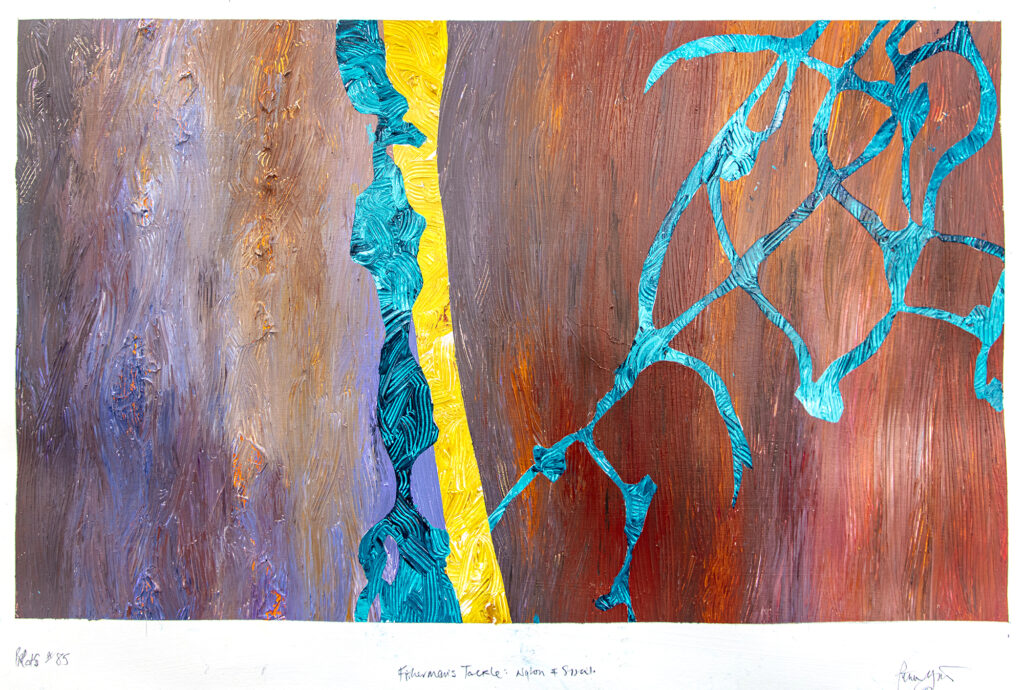 BRotS#85 another preparatory study in the Fisherman’s Tackle series. acrylic on paper 27×16.5 inches

Good morning. This is the view looking south but cloud, tinged an angry red, is creeping in over my shoulder from the east. The dawn chorus sings on blithely, uncaring for weather changes, happy in nesting, chasing each other with lust in their hearts, furthering the feathered species, singing as they go. Can’t trust these singers/choristers you know…

Good morning. Blue black clouds gathering, spots of rain felt? Imagined? as the cheep seats keep quiet and the gulls circulate crying plaintive, solitary, echoing notes. It’s not cold, 8 degrees, but the threat hangs in the air just as the apple and pear trees start to bulge their twig tips with promise of blossoms – poor timing, conned by a week of dry warmth to get caught by the cold to come…