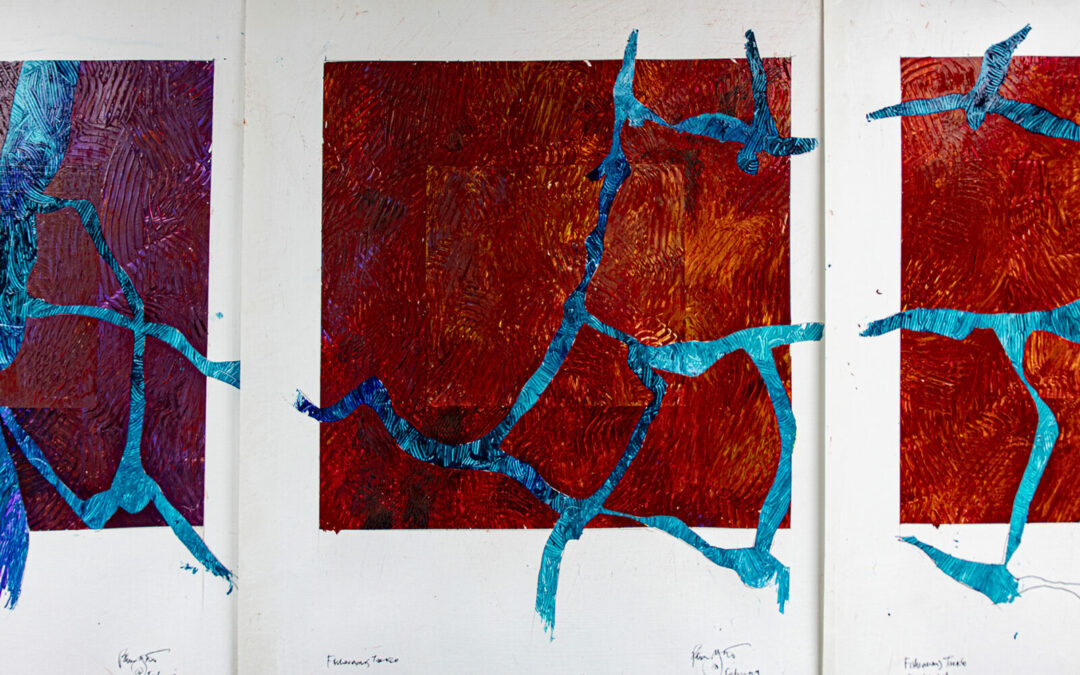 “March March to my own drum,

Hey hey I’m an army of one

Oh i‘m an army of one

Tell the ol’ boys in the white bread lobby

What they can and can’t do with their bodies

Temperatures are rising, cities are sinkin’

Dixie Chicks from the album Gaslighter

New piece – taking a break from the BRotS, partly because the creeping paralysis from the spinal problem makes it difficult for me to go back to Splash Point, and impossible to go to the Cuckmere, to refresh my imagery. So fell back on my old source, the garden. 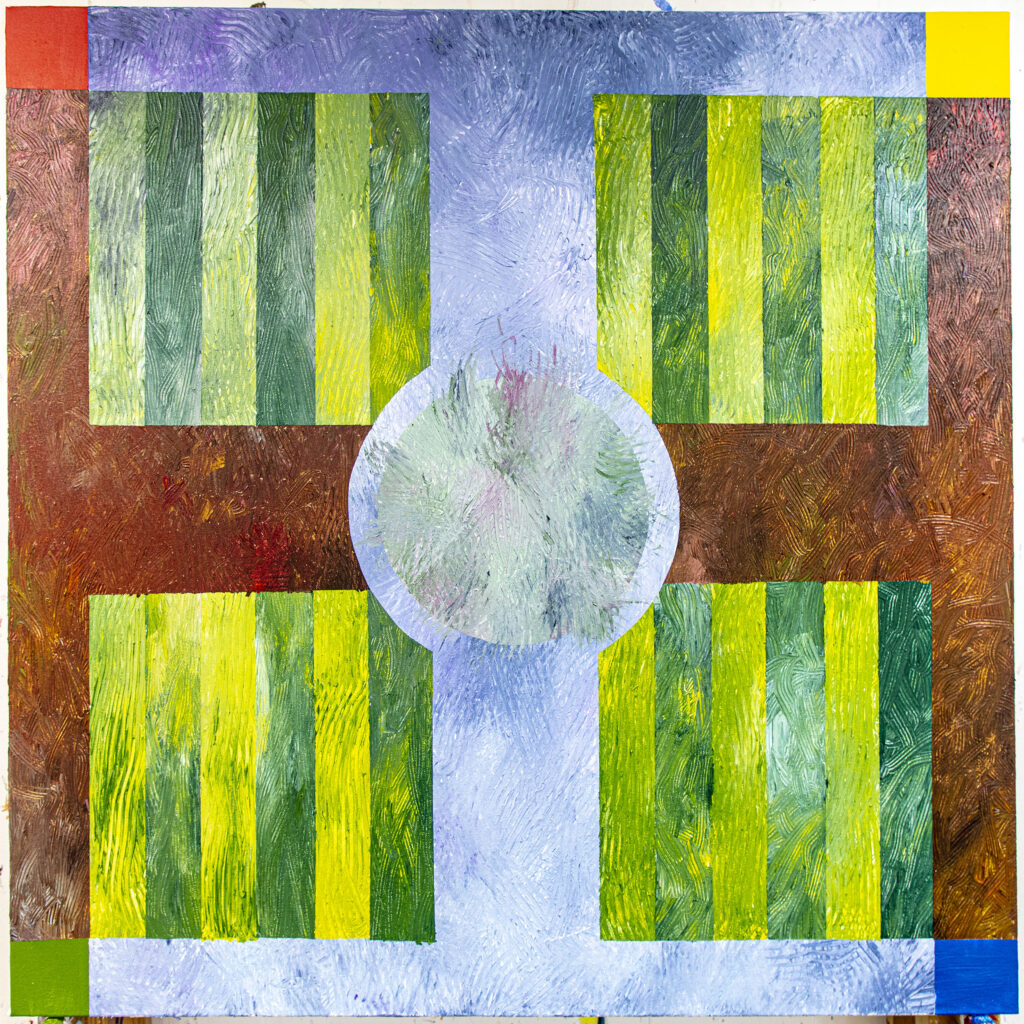 The pattern of the mower in the defined lawn areas of the garden 36×36 inches, acrylic on canvas

You’ll all be familiar with my morning garden and sky imagery which stretches back into the dim past on 4 different cameras, with over 2.300 images made from approximately the same place recording seasons etc. They all weasel their way into the studio work, and this latest canvas is an example of weaselling. 36×36 inches it had been sparked by the first time I have had a contractor mow the lawn.

Of course, he didn’t do it as well as me – goes without saying doesn’t it? So, this painting is the Mown Garden. Interestingly I did a painting of grass stripes in my 2nd year of college and was laughed at by a tutor! Ignorant bastard. So don’t laugh. I don’t, I hate being reliant on another person to mow the lawn, said I’d go out in a box first, daft bugger that I am. So these are the stipes I didn’t get… 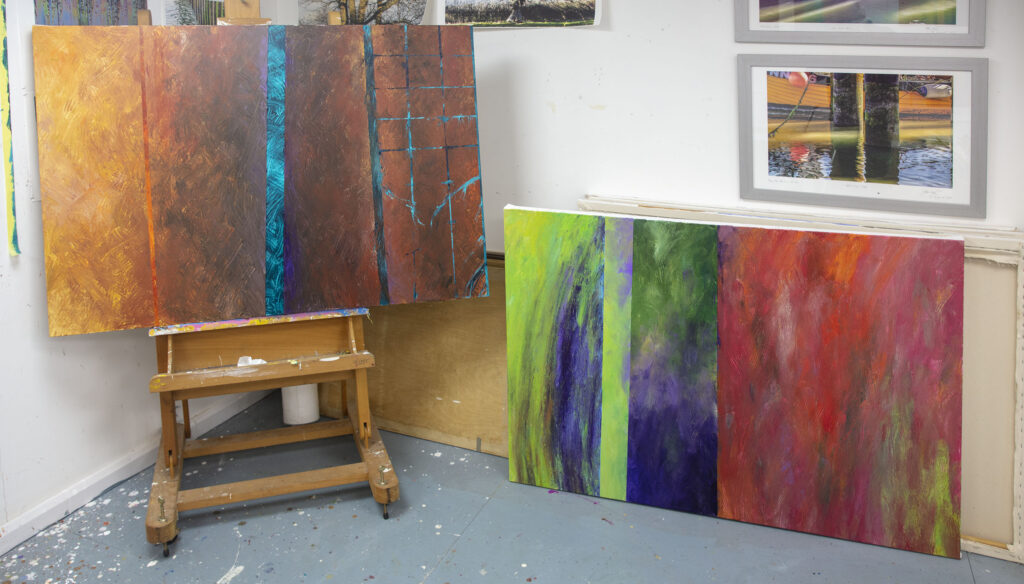 It was on the 3rd March that I was scheduled to go ‘under the knife’ for the sixth time in, I think, seven years, to remove the piece of fractured vertebrae that is compressing my spinal chord and the blood vessels to my lower body. I was due to leave to drive to the hospital , and hour and a half drive (£90 each way by cab, no hospital car service , the NHS is collapsing around us) anyway OH and I sat down for lunch day before and we started to refresh what the plan for going in was, when the ‘phone rang.

Operation cancelled. Unbelievable, after pre-ops, 3 days in isolation because of COVID fright, and waiting 18 weeks for it to be scheduled, they cancelled anyway and just 16 hours before the event. I don’t care what the reasons are but after all the years of paying into the insurance scam we call the NHS, it isn’t there when I need it After the medical error last time around I was living in terror of this operation too. What – you thought it the NHS free? No way – it is taken from your wages and you employer contributes on your behalf too. Everyone screams about the expensive US system, but Germany and France have better systems than us, they don’t fall apart because the wind changes. 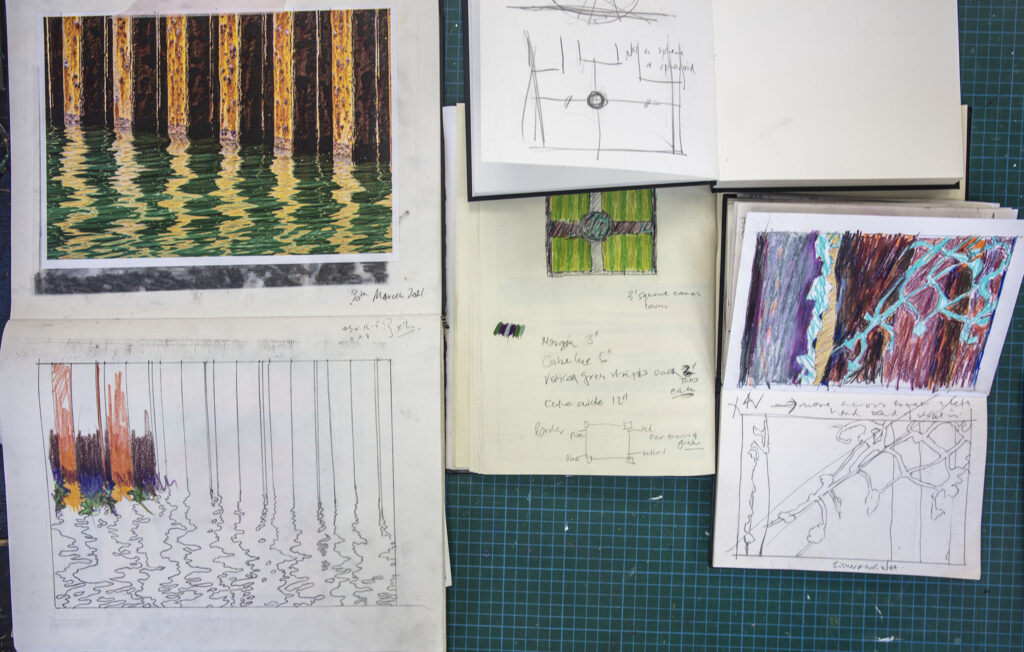 Anyway here I am in the studio realising with this latest canvas that a) getting up off the floor when stretching the canvas is getting more and more difficult and b) finding I cannot easily stand at the easel any more before paralysis starts to kick in. I wrote a long letter of complaint of course but OH said it would be weeks before I heard anything. Must be a bit like throwing a pebble into thick mud – a splat then nowt. Today I started in the studio at 07:40hrs and now at 16:20 I’ve sat to clear this from my mental space. I am determined to keep working, producing what I regard as my best work.

I play music loudly in the studio, classical or pop as the mood takes me. As I looked through my notebooks, I stopped the Mahler and started the Beatles Rubber Soul – a blast from the past but then went on to the Dixie Chicks. Sorry not called Dixie any more are they, the woke brigade got’em, just the Chicks now, although given the way things are now, I’m not sure that’s any better – anyway it’s a terrific album of bitterness and separation, but this assertive song caught my mood. Called ‘I bang my own drum’.

I’ve added my work to Instagram and started looking at other sites. OMG so much dross! I’ve started following those few I find interesting. As I upload work and photographs it makes me look back over what I have achieved over the years. Many artists like to be part of groups with shared interest. Years ago I was chair of a large group in the Artist’s Union, and I joined a designers group later, but I’ve never really been at home since the 70’s – maybe I’m just too old or too opinionated to be of interest anymore.

I Remember Arts Review running a survey years ago asking what happened to artists once they go past 35 – 40. Well, I can tell you – they becoming either famous and rich or pretty invisible. But as I look back, I see I have followed my own unique path to becoming one of the latter. I bang my own drum. I like it too.

“Lies are truth and truth is fiction

What the hell happened to Helsinki?

Hey hey I’m an army of one

Dixie Chicks, as before.