Snap Judgements and an Innocent Eye 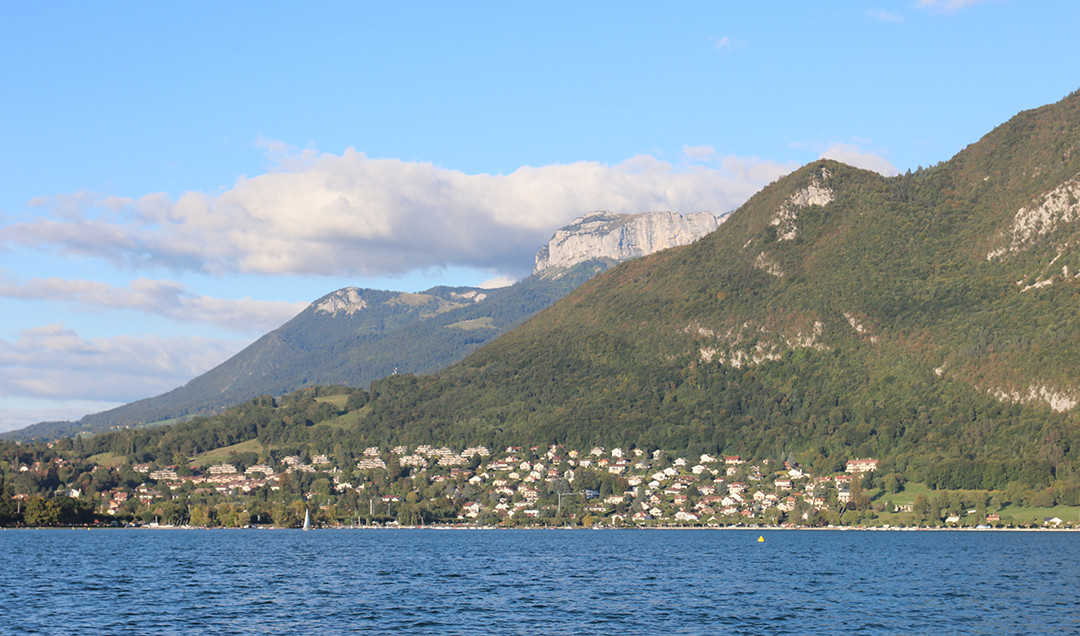 Many of you will know that I have sold my interest in HotelDesigns, and after several months in which I have missed the activity and have had to kill the habits that drove the daily writing and thinking about hotels, I have become focussed on my artwork again, after some 30 years of focussing on design. A major element for me in HotelDesigns was taking images to fit with the things I was seeing to write about in interior designs. I could not go into an hotel without carrying a camera. 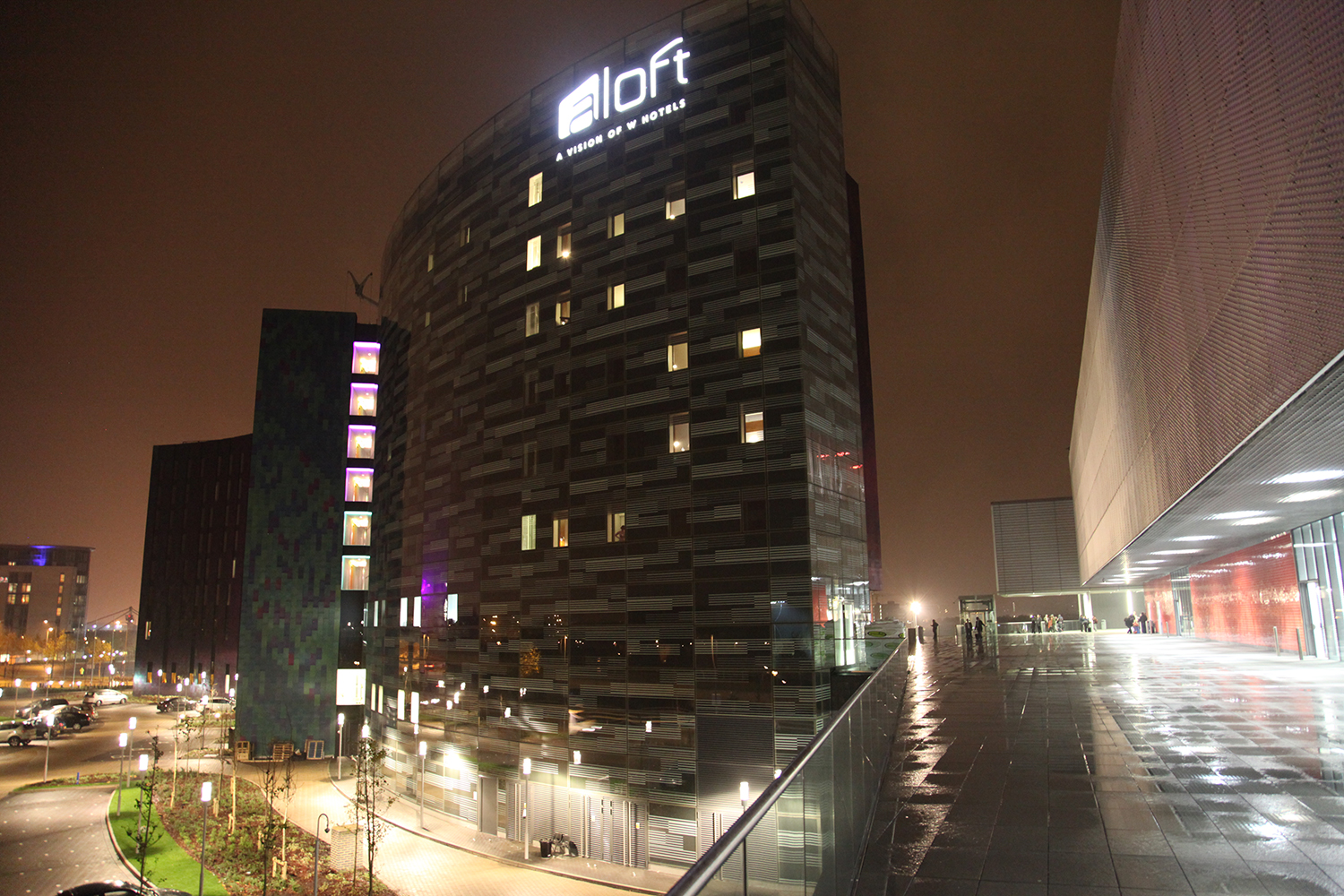 typical of my hotel snapshots., the A-loft in London’s Docklands at its opening

I still usually have a camera with me. Anything I see that strikes a chord of interest or aesthetics is recorded, such as the images of the kids on the cliffs locally. This means I take hundreds of images a month, many of which end up archived on my server, but many of which also form albums or items for printing out and placing on the studio walls as the beginnings of artworks. In this way the photograph is replacing the sketch as a working tool.

This doesn’t mean I no longer use a sketch book. I still draw, and now the photography is no longer dominated by recording for possible articles on hotels and design, but is there for my use in exploring my visual world. The connection between the two activities of drawing and photography is coming in to sharper focus. The synergies between them and the relationship of taking the images that result into painting are becoming sharply focussed. 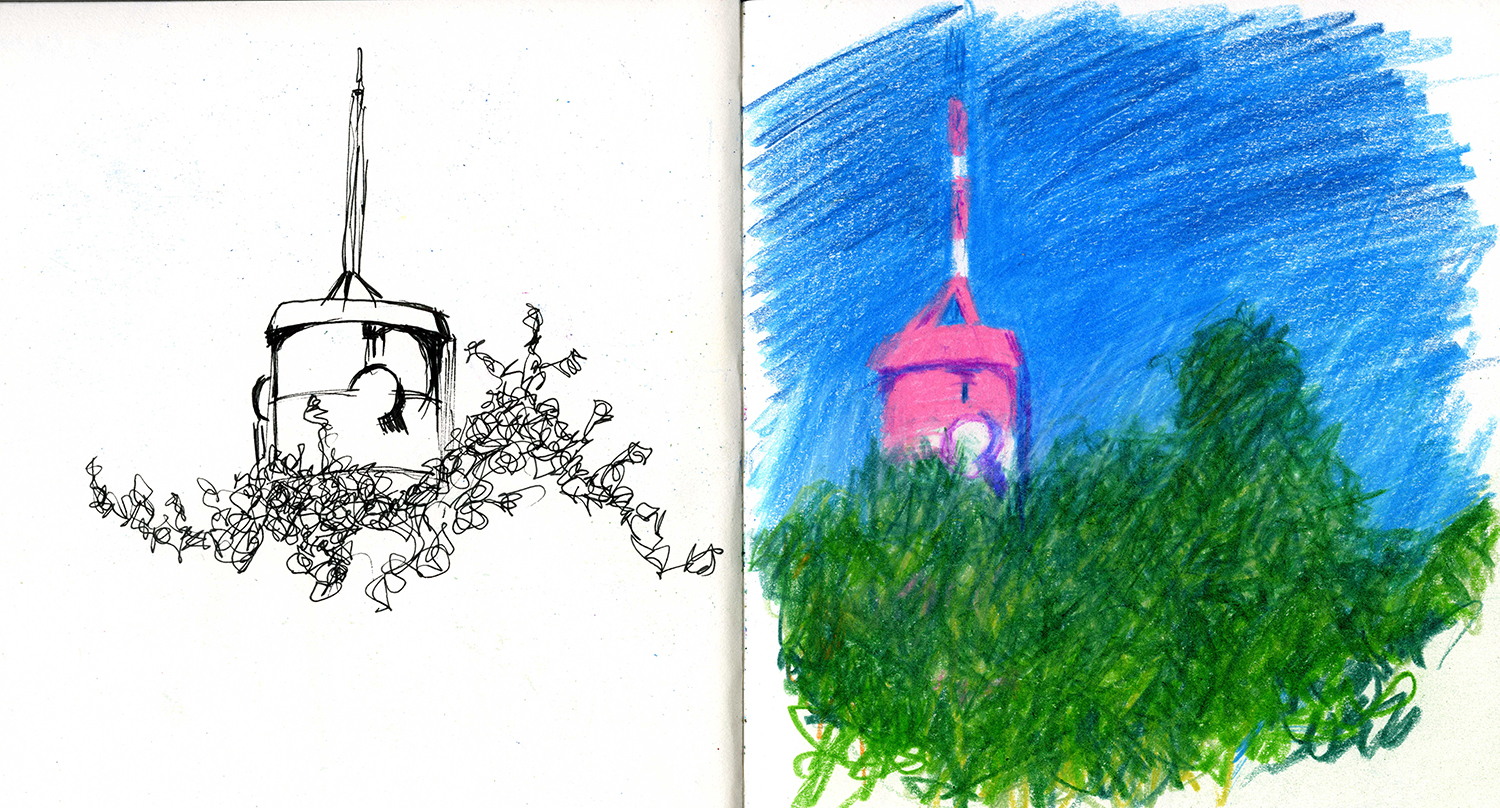 Initially I have just been taking snap shots. I still will.  I have found I need to make immediate response to an image, often because if I take longer, then what I saw disappears or becomes overlaid with a pre-existing set of visual concerns. I try to keep an ‘innocent eye’ as much as one can when the eye in consideration has been trained for some 60 years to be focussed and sharply inquisitive. Failure to do so means images become predetermined. My mind retains images, I think in pictures, and I use the printer and computer combination to play with them, taking the results down to the studio to be worked into larger pieces using the autographic media such as coloured pencils, oil pastels, or paint. 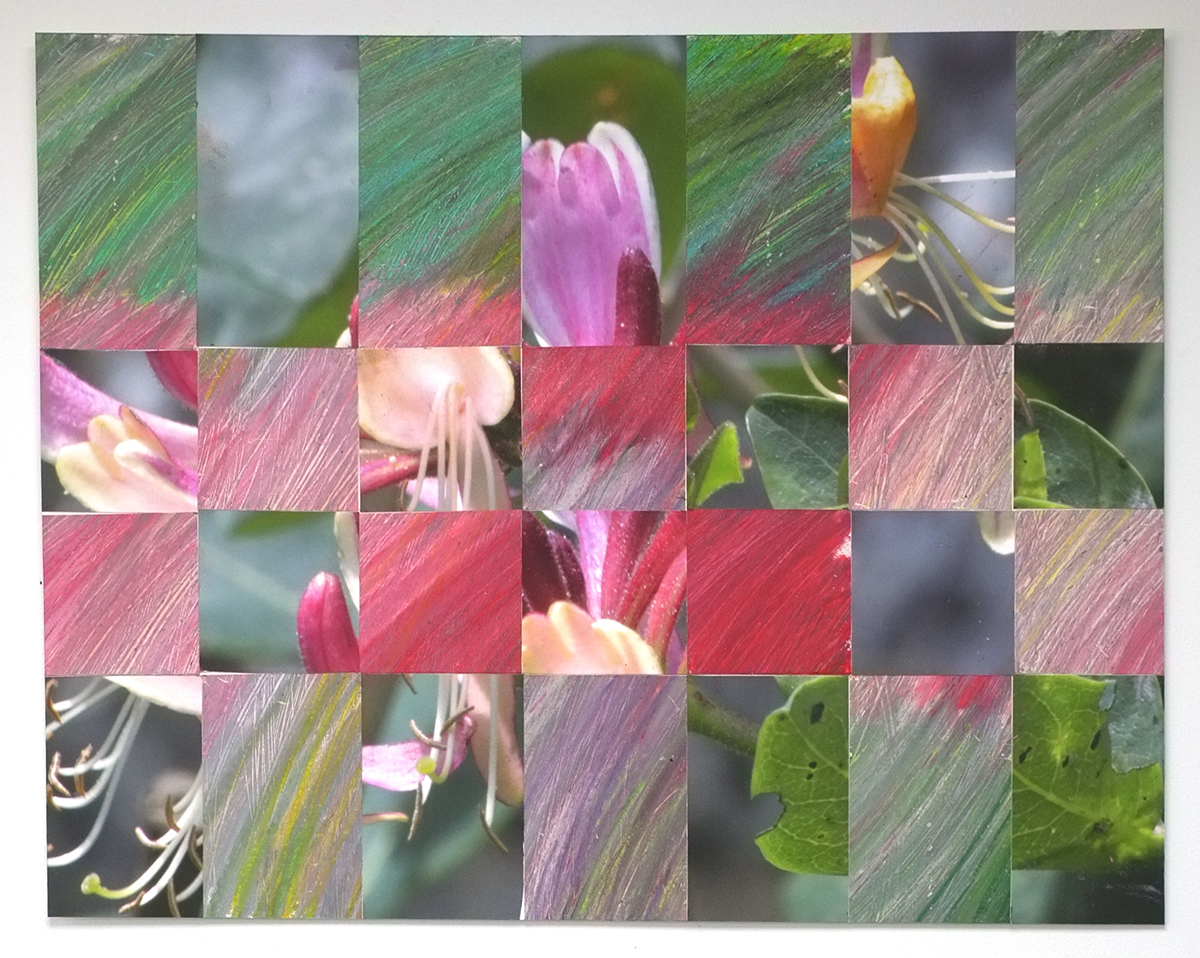 After so long away from painting developing and tuning in to the ideas and philosophy that underpinned my work from earlier decades has been difficult. I paint, therefore I am. What and how to paint just kind of grows in you in youth, but now I find I question and connect through different paths. I find the activity is more profoundly tied up with identity in a way that may have been submerged by youthful energy/libido in the past. I am beginning to focus on the nature of the relationship between the hand, eye and brain in working the images, and to focus further on how the images relate to my physical and mental well-being and existence (something underlined by being treated for cancer and diabetes).

Time and again the hand is developing what the eye first recorded in the photographs. The ability that technology brings to quick photographic printing on a large scale is enabling the exploration of the relationship between the printed and drawn images in an immediate and direct way. Not the painstaking drawn enlarging of a 8×10 snapshot I might have done in the 1970’s, but the direct incorporation or collaging of the photographic image into the drawn image. Nor does it always start with a photograph but sometimes the initiation point is something in the sketch book, and recently having the time (now I am released from commercial drivers) to contemplate and draw, rather than just grab an image with the camera, is leading to  a fuller exploration of the relationship between these tools. 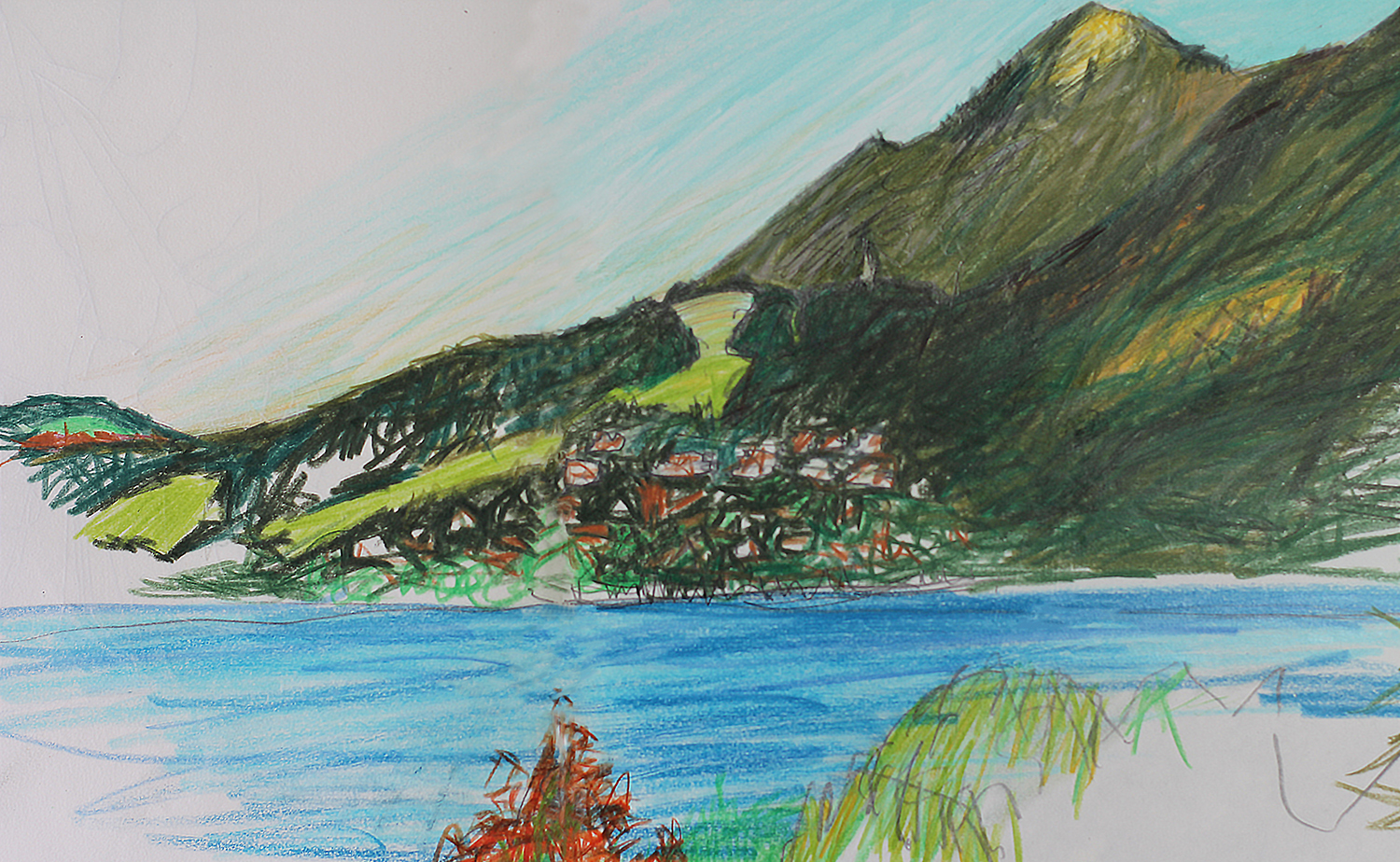 Pencil drawing, lake Annecy in France. Drawn across two pages of a large sketchbook in pencil, approx 18 inches across

The use of technology is reinforcing my interest in the nature of the mark. Much as when I screen-printed I became interested in how different meshes changed the nature of the print (an investigation cut short by life development and now made redundant perhaps by technology shifts) so I am beginning to experiment with different ways in which the printer or the printed image can be ‘abused’ to fuse with drawn marks. This is creating a feedback loop into the photography so that what I ‘snap shot’ is beginning to be considered in relation to textures and colour, something which my seaside environment is rich in.

Experimentation with the interface in screen-printing. The mesh used here swallowed almost a pint of ink on each pull

The autographic mark in an oil pastel drawing is being wedded to the image seen. This is creating and reflecting my creative mind set and is helping rebuild an identity surrendered to the lure if filthy lucre. The surrender is not abnormal. I remember working for John Hoyland, a painter I admired, and being shocked by seeing him working on seven or eight paintings at once, moving along the line with the red and shouting for me to prepare the next colour for him to use. I remember watching Adrian Heath throwing paintings on a bonfire in the back yard of his house in Corsham, both painters driven by the same commercial considerations that took me into a career in design for 35 years. Hoyland was producing a body of work for an imminent show, and Adrian told me he was burning to ‘keep the prices up’ (and despite my begging he wouldn’t let me have a piece either).

Art work produced directly from the photograph. A2 size detail of an image, part of the ‘Sea’ series in the gallery here

Statistically I have twenty productive years ahead producing work. I am proud of the awards my design practice won. I am proud of the writing, videos and photographs I produced for HotelDesigns. Some of the better ones I will rework to use here on my blog, where relevant. It isn’t easy to leave behind something that so defined my identity for over 35 years. Yet that was not just who I was, and the work that lies ahead will suck in much of what I became to define now who I am.

I paint therefore I am.