Last year thousands of rhinos were killed, and the web is vitriolic in its condemnation of smug rich hunters posing with the rifles and dead beasts they were adding to their trophy list. The sick trades in rhino horn, illegal ivory, bush meat and hunting licences threatens to the very basis for the huge market in wildlife tourism in much of Africa.

It is not just in Africa that wildlife is being destroyed by the hunting cult. Recently I visited a newly created bird reserve in Italy. On the Grado Lagoon, the reserve has been created for harriers and other birds. The warden was most excited by the latest sightings – wood pigeons. “Why the absence of other species”, I asked, as the absence of many of what African rangers refer to as ‘LBJ’s’ was quite noticeable. This honest and open man crumpled slightly as he sighed and revealed that on the land and water around the reserve hunters of duck and other birds held licences for shooting over 55 days of the year, inevitably targeting the birds the reserve was anxious to protect.

Wild and bird life tourism generates the jobs and capital investments needed to provide employment in many countries – the success of the RSPB reserves such as Minsmere is testimony to this. In post-colonial states, where the so-called ‘mother countries’ totally failed to invest in education and social development, wildlife tourism is an essential element of the economic plans. In Southern Africa tourism growth rates are astonishing with a range of countries demonstrating growth of up to 17% a year. Most of this is being developed by local entrepreneurs as the major international hotel chains have seen fit to fail to invest, with the a few noticeable exceptions, such as investments made by Rezidor, and the recent Marriott purchase of the South African Protea group hotel collection, the largest on the continent with over 108 hotels. 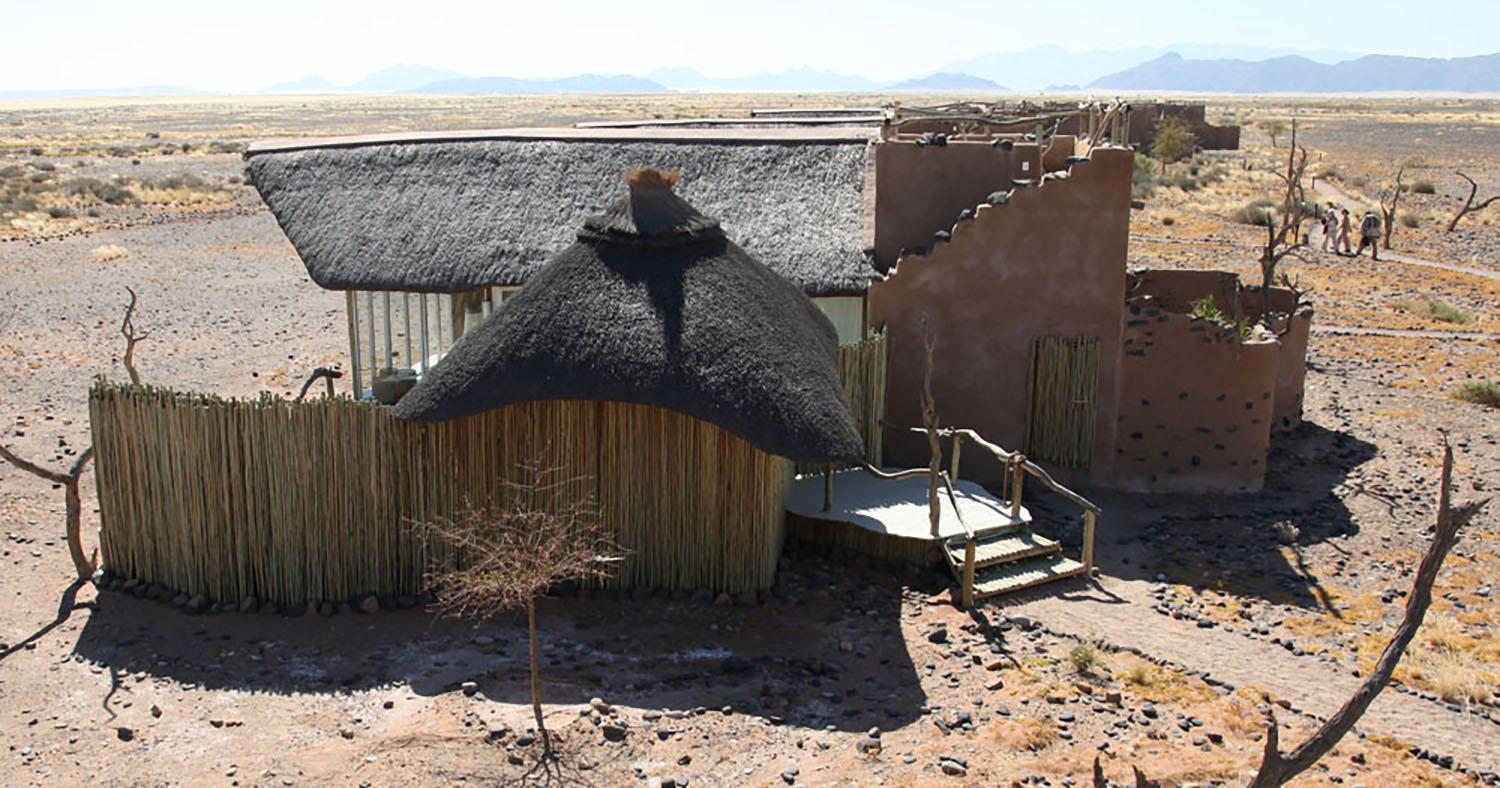 A typical Wilderness lodge bedroom – this one in the Sossusvlei, Namibia. Accommodation is far from spartan

Key attractions in these countries are the landscape wilderness and the wildlife. A clutch of operators have sprung up that exploit eco-safaris in these areas. I enjoyed a wonderful trip with the Wilderness group who have some 63 game lodges across the region. Working in partnership with local communities, making a gradual equity share arrangement transferring ownership, they employ and train (in partnership with UK’s Red Carnation group) local people. They and other organisations rely on the presence of wildlife and invest time effort and resources into maximising conservation effort. For example in Namibia if a farmer loses a goat to a leopard, the compensation is more than the market value of the goat so that there is an incentive for local communities to support the conservation efforts.

It is distressing for these communities and for the operators, that poaching is so endemic that it is now threatening the survivability of whole species (the Western Black Rhino, last seen in 2006,is now officially extinct). With death of these beasts come the death of the businesses that rely on their presence. Worse, far worse, is the oft voiced suspicion that the rangers who are so good at locating game by day for the tourists are making additional short term incomes by selling those locations to the poachers. Rumours abound of them providing these services to poachers. More horrifically it is thought that Rangers in Zimbabwe have been poisoning elephant as part of a dispute over unpaid wages.

Rangers are skilled in taking photographers to get their shots – they know best locations and times of day to ensure the beast or landscapes are at their most photogenic. In the Sossusvlei for example they know that the dunes achieve their orange/pink colour in the light of dawn and take the photo tourist out in darkness to arrive at the location at the optimum time. Similarly whilst they may search for game in a random manner, the knowledge of years and their radio communication with each other enable them to take the photographer to the locations for their shots. In many ways then the guides, frequently an underpaid member of the hospitality team, are actually the most important people you will meet on your safari trip. 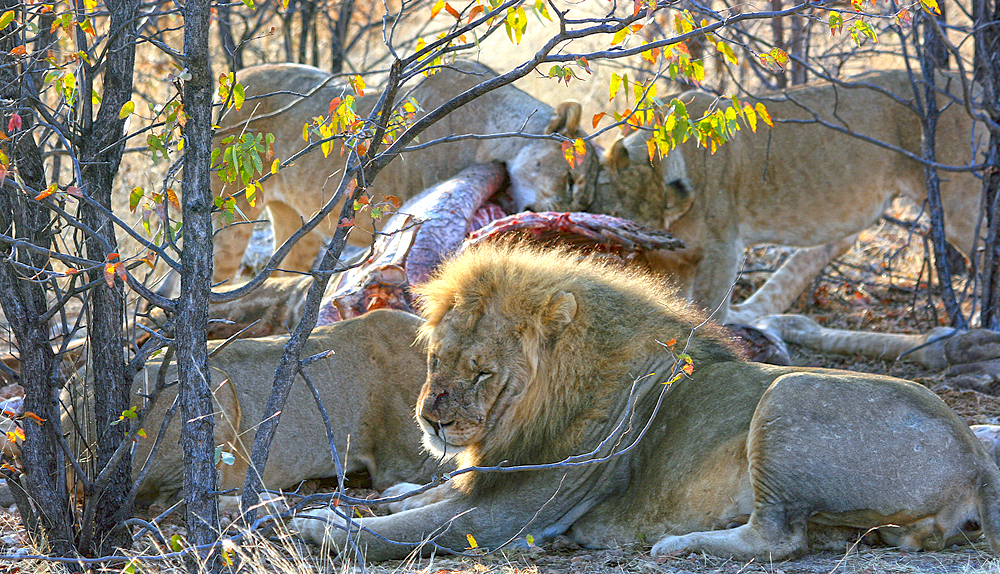 Lionesses tuck in to a giraffe behind the master of the pride, who has already eaten his fill

The rangers too, and their knowledge, are the reason for going with an operator rather than trying a self-drive holiday. The cost may be higher booking through a company but the cost of going the whole way and not finding the game/whales/birds you went to see makes self-drive a cheaper but more unreliable option. I have tried the market B&B’s through to the top resort 5 stars, and whilst there is a growth of tourism to the cities, this is not where many operators make their money. For many the safari remains the prime market, where the season may be short due to excessive heat or rain. For example many safari camps are set around water holes but in the wet season much of the game doesn’t visit them because they can get all they need to drink in the bush

This is a business pyramid, built at the base on the expertise of local people as guides, and the pinnacle being represented by exclusive game lodges offering great luxury alongside the safari experience. This business pyramid rests on the availability of game, on the viability of the ecosystem. This viability is being threatened in many directions. In some areas the reserves, once in the wilderness area, are now being pressed by urban growth around their borders. The wilderness range of animals becomes compressed and like the herds of buffaloes in the Old West of the USA, hunting and killing for food has cut the numbers drastically (in Namibia at the turn of the 20th Century the colonial German army used machine guns to ‘cull’ the herds of Springbok).

However poaching remains the biggest immediate threat to viability. Conservation efforts are undermined by corruption and short term profit taking, as well as the dilatory nature of weak international agreements. Whilst in European countries such as Italy and Malta the hunting lobby continue to hold back efforts to develop wild life tourism, in Africa illegal hunting is the main threat. Long term in both regions this threatens the viability of the wilderness tourist industry, and thus the economic development of areas.

Money spent on safari or birdwatching may be enough to ensure the survival not just of the local village but of the wildlife you photographed and enjoyed. Being a wildlife tourist can aid conservation, but overexploitation can result in area becoming more like wilderness zoos, with convoys of tourist packed 4×4 vehicles travelling through the bush. Price remains one of the main ways to regulate and restrict numbers, so don’t feel aggrieved at how much it costs you – look on it as a hugely memorable and pleasurable donation to conservation.

See my art here in the Gallery/shop and on Facebook