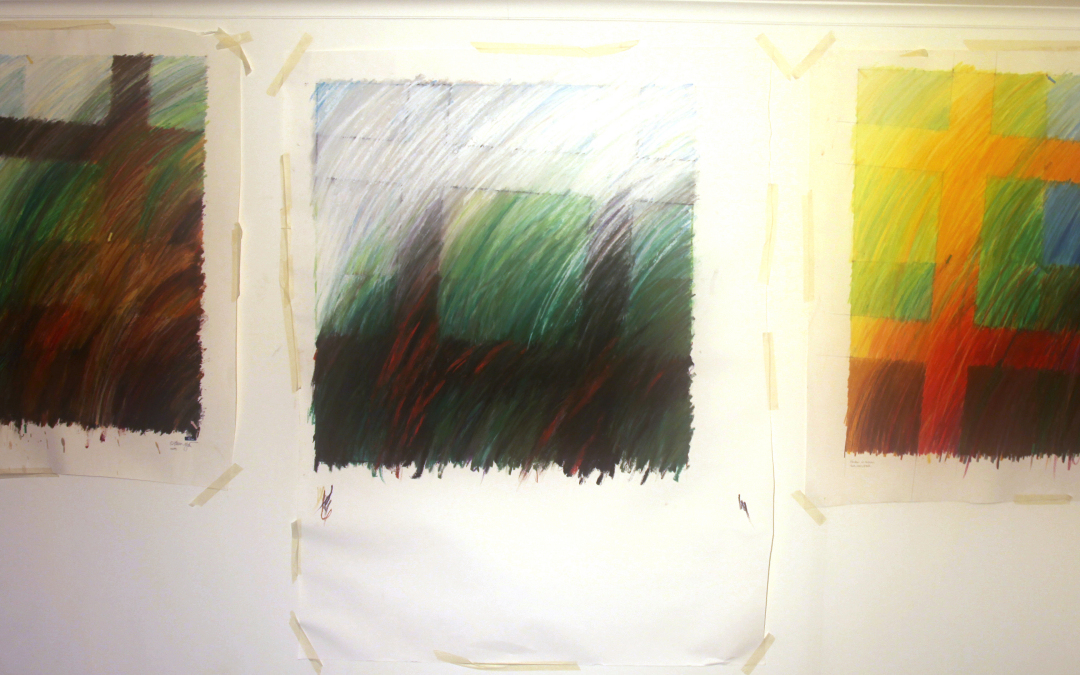 I wasted two days this week searching for missing photographs of Verdun. In my new studio I was finishing a triptych of drawings based in the colours from the images taken on a visit to this killing ground of WW1. In Verdun birds still don’t sing. Over half a million men died there and the ground remains sacred to the French nation today. The visit was made in 2001 when digital cameras were in their infancy and it seems unfortunately the CD I stored the images on has disintegrated with time. The drawing remains the memory of that moving journey.

The drawings explore mark making and colour within a format based on the most stable of symbols, the square and the crosses of French and German cemeteries. Each piece is 36 inches by 36 inches

Annoyed with myself and grieving over my lost time I took the camera and mooched off to walk the cliffs. As I climbed the reverse slope the wind speed increased until I could barely walk into it. I braced myself on a seat on the cliff top and marvelled at the angry sea, tasting the salt on my face, and constantly wiping the camera to keep it free of the spray rising over 200 feet from the breakers below.

The waves were high, maybe three metres. In the background spray can be seen bursting higher than Newhaven lighthouse

The  waves hitting the beach must have been nearly three metres from trough to peak and when they burst on the shoreline the breaking wave sometimes went over ten feet high. Some of the favourite walks, like Splash Point, were continuously under water. Yesterday I had seen waves breaking over the lighthouse in Newhaven, and today they were even worse than yesterday.

At Splash Point the police again had to warn children away from the breakers. It is only a month since these waves claimed the life of a 14 year lad, whose body has not yet been recovered

To my amazement the beach cafe adjacent the Martello Tower was open and people were buying their take away coffees and slices of bread pudding to eat as they walked. What is it now, that people can’t walk without a drink in their hand? Yet people were walking and even getting close to the breakers to take photographs of each other. A lark to some, these waves have taken 3 lives along this coast in the last month and should be treated with respect if not fear.

The cliff of shingle the Environment Agency had created to help protect Seaford was being occasionally overwhelmed by the ocean and shingle and weed was scattered across the footpaths. Yet the shingle bank was saving the town from far worse, including the flooding that used to happen in the past. The wind and spray made the walk bracing, to say the least. I returned to the studio with cobwebs blown well away, determined that over the next few months I shall rediscover my artistic voice, generate my own new myths to get into working on canvases again.

Yet it is harder to shed the ideas of the past than I thought. I think the drawing period will be quite drawn out (no pun intended) as I work my way through this blockage. Photography helps, as does the landscape here, but as yet I see no direction.

Yet, as Henry Miller wrote, ‘to paint is to love again’.