Softly Susurrating Sands in the Sossusvlei 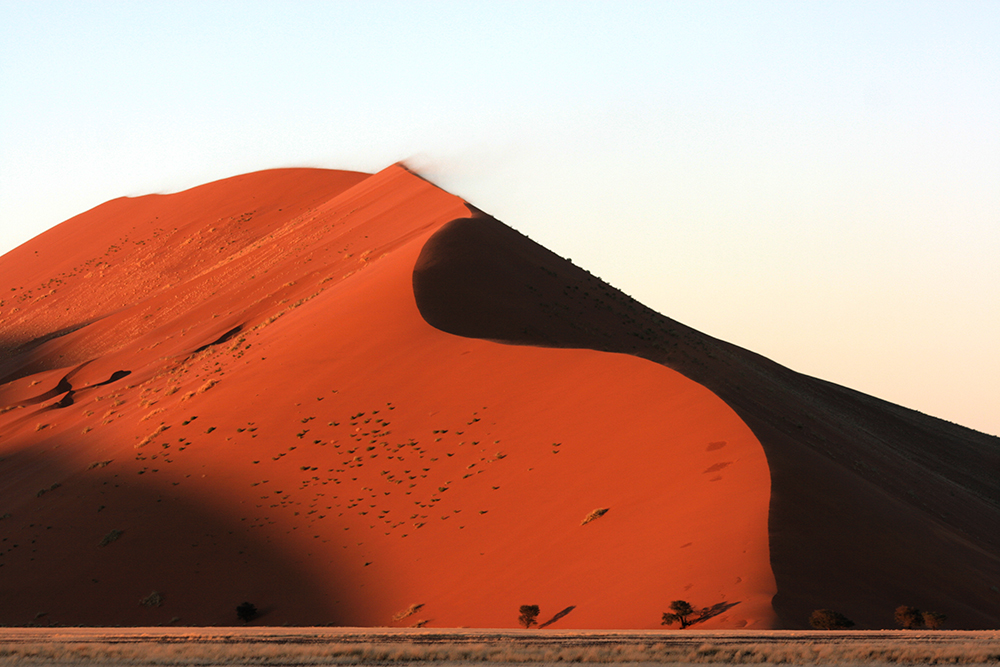 Some photographs, like that of the Seven Sisters I mimicked in my last blog post, are determined by the location, and not much by the photographer or even his equipment. Like the views of the Seven Sisters, the giant sand dunes in the Namibian sand sea have been snapped by hundreds of amateur and professional photographers. The fascination with landscape and the scale of our selves against it are common factors in much of todays imagery. Credit for the images of the dunes really should go to the cabal of guides who know they have to be taken at sunrise and who know this particular dune is the most photogenic.

I was in the Sossusvlei before the season had really begun but even so we were not alone. Our 4×4 truck had plastic windows to keep out the worst of the cold, for in the early mornings even here in the Namibian desert it is possible to see frost on the slopes of the dunes, and it was freezing. In the pre-dawn darkness we drove into a mysterious landscape, the sighing wind softly slipping the sand into new runnels as we slipped into our seats. The scenery was fantastically beautiful, the early rays of the sunrise colouring the sand with a magical glow. Looking back, the headlights of another Landrover broke the bareness of the grassland edge against the glow of the sun as another tourist braved an 0530 hours start to catch the same imagery.

Like the South Coast way over the Seven Sisters, managing the number of people wanting to experience the beauty of landscape is beginning to be problematic in wilderness areas. The Sossusvlei does not yet have the attraction of say the Ngorongoro crater in the Serengeti, where one guide told me he had counted 50 Landrovers of tourists in view at one time. Yet even here the wilderness was not unpopulated in the pre-season ‘shoulder’ tourist weeks.

Images here are completely unretouched – the colour really is like this

The sand sea runs for 400 miles up the Namibian coastline in a band stretching 40 miles inland. Access is closed at the bottom by the ‘forbidden zone’ that contains the diamond mines. Its reputation comes from the days of sailing ships along this lee shore, gaining it the name ‘Skeleton Coast’. Its dry sand preserves much from decay, so from the air abandoned mining camps can be seen, canvas still stretched over long abandoned tent poles, and shoreline shipwrecks remain undecayed.

Shipwrecks on the coast appear and are gradually reburied by the slowly shifting sands, which form cliffs where the sea beats against the dunes. Yet there is a four by four route across this wilderness, and it is far from empty, oryx and other beasts finding enough to exist whilst the wild coastline hosts colonies of seals.

Tourists camp here, driving hire cars from Windhoek airport, yet there are few petrol stations, no rescue services and the mobile phone coverage is patchy to say the least. Yet intrepid or foolhardy tourists drive this unforgiving landscape with nothing more than a couple of bottles of water and a bag of sweets to sustain them in event of misfortune. Misfortune easily happens, as our experienced guide/driver showed when a soft patch of sand pulled the tire from the wheel rim on our vehicle. In the cold wind bleakly blowing sand head high across the track our guide insisted on working without assistance to change the wheel – probably wisely given our urban naivety about the task on soft sand.

The scale, emptiness and brutality of the Sossusvlei delivers a salutary lesson in the nature of wilderness. It filled me with a sense of wonder, a stillness and desire to just sit and contemplate the vastness, much as I sit now on top of Seaford Head looking out to sea or along the coastline, filled with an awareness of the beauty of our planet. From Seaford Head I can stroll to the beach cafe for a coffee and a slice of bread pudding , from the sublime to ridiculous, but in the Sossusvlei the guide is the only link with civilisation.

They say you can take a Namibian bush guide blindfolded anywhere in his country and he can take a pinch of the soil in his hand and tell you exactly where he is in its vastness. Ours knew his way unerringly to the dead trees of the Sossusvlei, frozen in time in a lake that was once, but is now mute testament to a more fertile past.

This landscape speaks of the vastness of nature. With half the globe’s population now living in cities which are rapidly becoming less and less distinguishable one from another, landscape retains the sense of place. This landscape dwarfs and renders almost insignificant the people within it.

OH and our guide wrapped up against the cold

I found living in the city exciting but my soul grieved for the loss of horizon that a vision bounded by buildings necessarily suffered from. In Namibia I realised the power of the landscape in giving a man humility in the face of nature. In Seaford I am delighted to have found those horizons again, but Africa still calls me back…

I stayed at Little Kulala  for my trip to the Sossusvlei