Poppies are not just for Remembrance 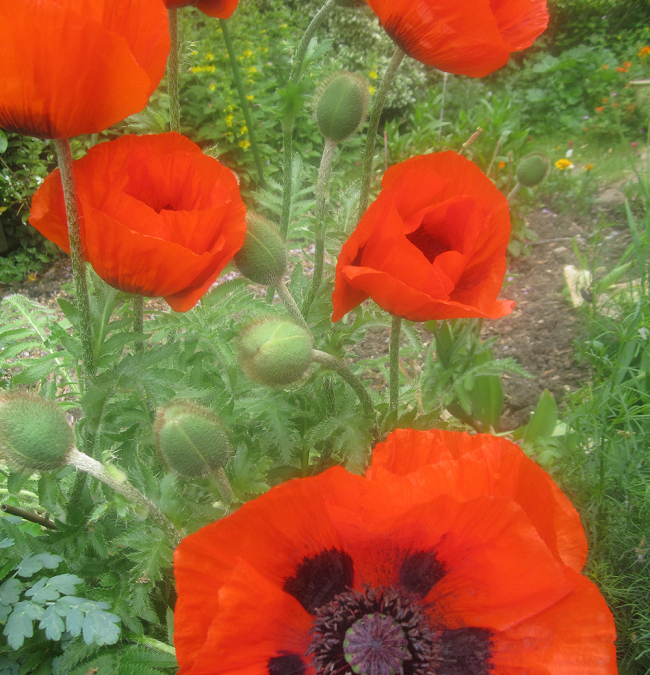 The wearing of a poppy has stood as a symbol of remembrance in Britain and the Commonwealth since its introduction by the British Legion in 1921.

Flanders poppies alongside a French canal

It owes its place in symbology of war to poet  and Canadian medic John McCrea, himself buried in the Commonwealth War Graves Cemetery in Wimereux. His evocative lines became the best know poem of WW1. They read:

In Flanders fields the poppies blow

Between the crosses, row on row

That mark our place; and in the sky

Scarce heard amid the guns below

We are the Dead. Short days ago

Loved and were loved, and now we lie

Take up our quarrel with the foe;

To you from failing hands we throw

The torch; be yours to hold it high.

If you break faith with us who die

We shall not sleep, though poppies grow

Not just a lament but a passing of obligation to future generations. Our wearing a poppy honours these lines and in my mind at least signifies an acceptance of an obligation to the fallen for us, ourselves, to stand against tyranny. The poppy of the poem and of the British Legion still stands powerfully as a symbol of Remembrance, but the poppy is not just a symbol of Remembrance.

The poppy is also historically a plant that relieves pain, both through the dreams of addicts and through its pharmaceutical derivatives of its raw heroin state – through painkillers such as codeine The heroin poppy is just one of the variations of this beautiful flower, from the robust simplicity of the Flanders poppy, through the delicacy of the Californian poppy to the glory of the decorative poppies of the garden. Wearing the symbol also helps relieve pain of memory, sharing with others the sense of loss.

Here its colour glows, a panoply of glorious colour that shines from garden and meadow alike. Its glory is a red so brilliant it corruscates in the afternoon sun in the garden – these photographs have not been ‘photoshopped’ to enhance the colour, this is the glare of simultaneous contrasts of a brilliant red against the complimentary green. Whilst the cultivated sophistication of pinks and yellows may appeal, to me it is the rich red, glowing against at the greenery in my garden, that dazzles my eye and thrills the senses.

Yet the red is the red of blood, and as the poppy grows through its annual passage of bud to decay I see in my garden the cycle of brief beauty of life. Its symbology is strong and I still see the simple Flanders poppies in my mind’s eye conjuring the brief flowering of youth ending in decay in the Flanders mud. Whilst I am thrilled by the colour I see in the garden each year, the cycle of bud through flowering to the rain beating the flower into the garden mud of autumn is a reminder.

Wear a poppy with pride on the 11th day of the 11th month.

The poppy is not just for Remembrance, yet it stands for that all the same.