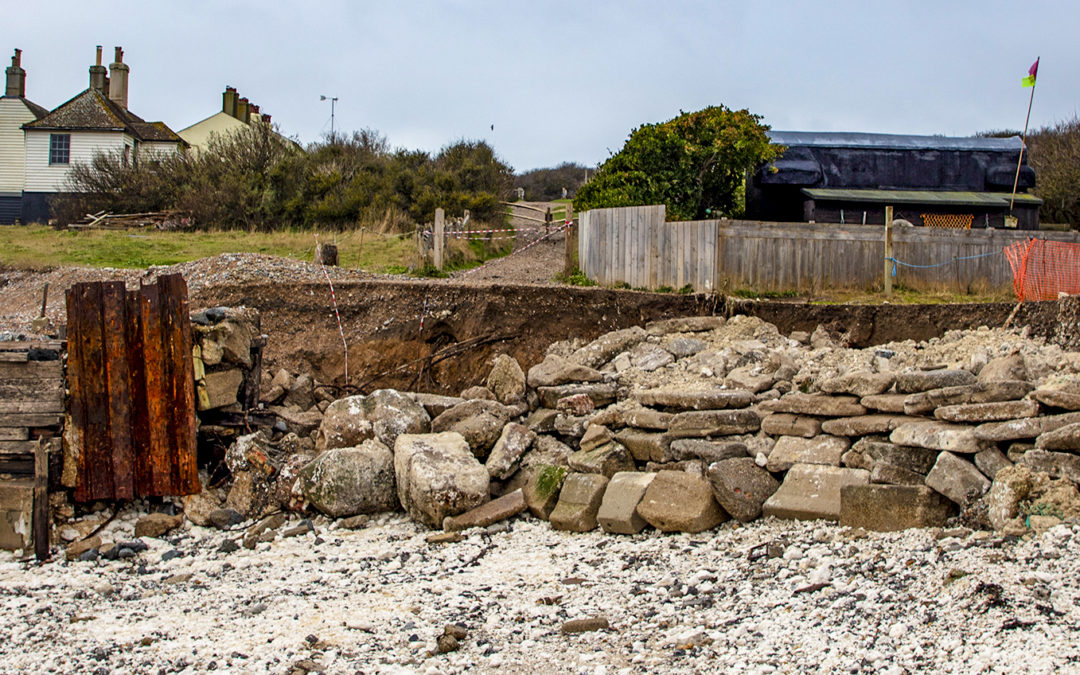 It has been a while since I walked down to Cuckmere Haven. During COVID lockdown I kept hearing rumours of it being overrun with visitors and the road up to my usual parking place, Seaford’s Barn, was jammed with cars. Then I began to hear from friends, aware I was working on a series of paintings of the Haven, telling me the erosion had accelerated recently and that the largest preserved listed bunker form the WW2 beach defences was about to fall into the sea. I thought it was time I made the effort to go and see for myself. 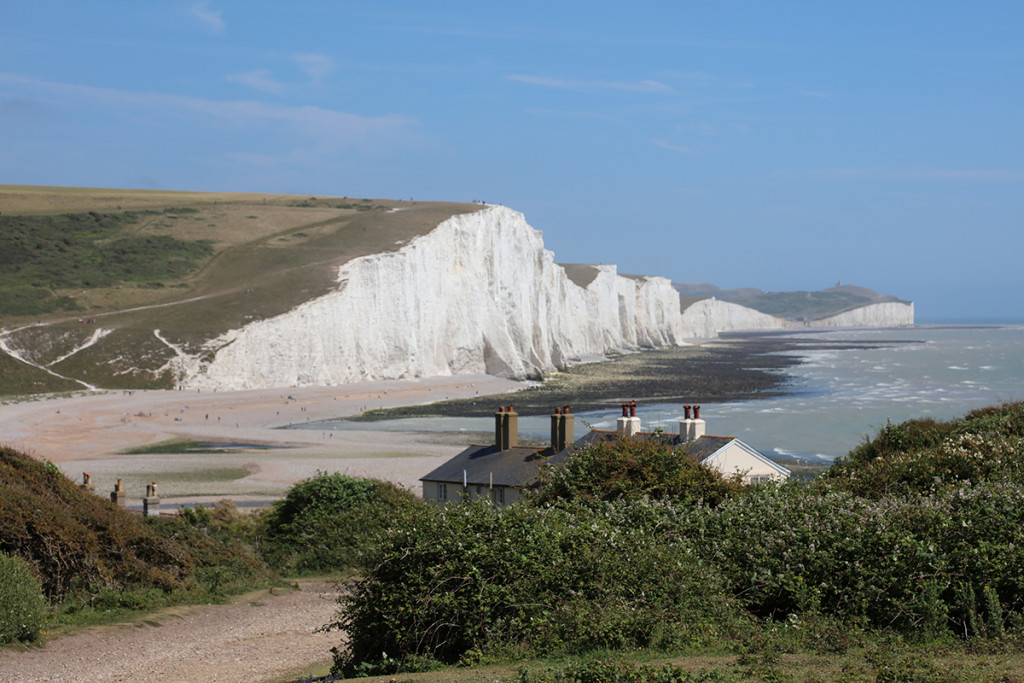 One way to beat the crowds is to be early, so I was parked up beginning my walk just after nine. The penalty is that it is perishing cold and my daily weather image was recording a temperature of just 3 degrees when I took it first thing this morning. With a chill wind dropping the temperature further I was grateful for the Arctic coat protection I had been given when hunting the Northern Lights just over a year ago. Of course, going down the 600 feet hill is OK but coming back up was more testing. The walk had a sound accompaniment as a large noisy flock of Canada geese settled on the marshland. 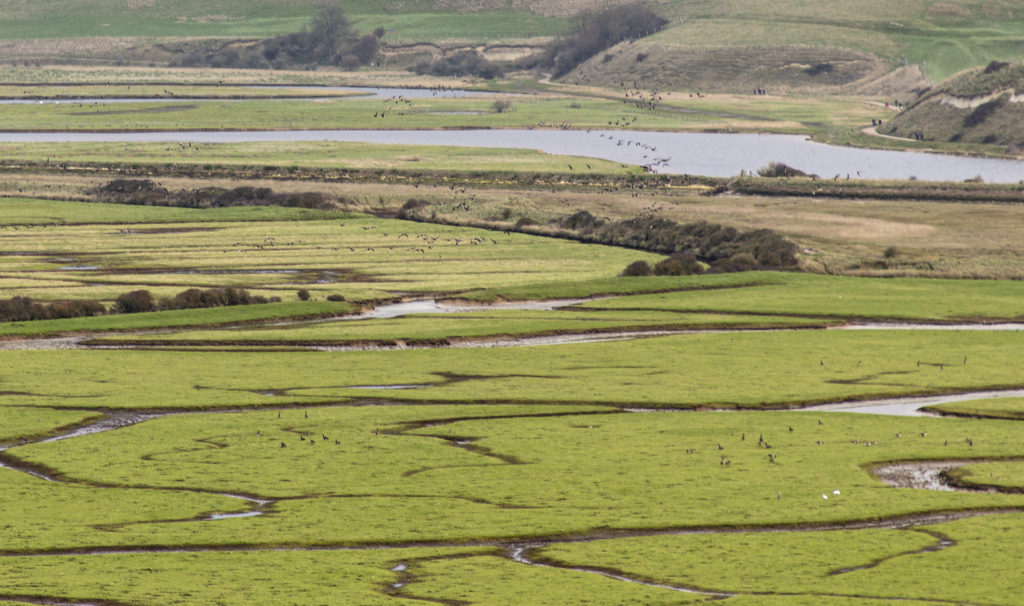 As I neared the Coastguard cottages, I found a huge deviation to the path. The seas I described in a previous article were through the harder rocks at this point and were rapidly taking away the soil washed down over the years by the river Cuckmere. Like Birling Gap this soft inlet was allowing the sea to claim more land as its watery domain. As the soil was removed so the sea swept behind the concrete defences dating from earlier times and was undermining the listed buildings. 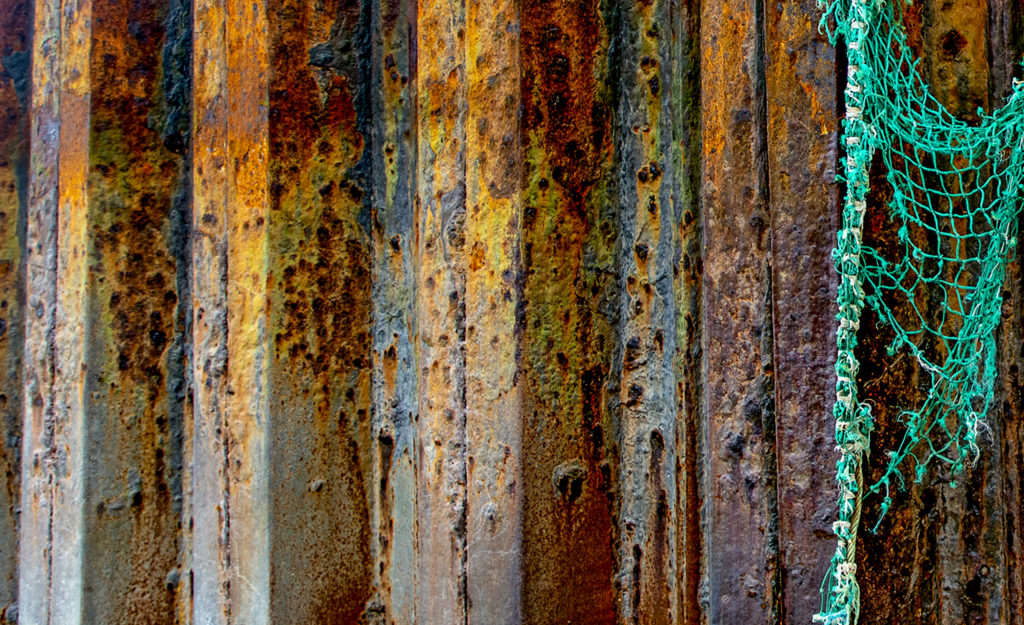 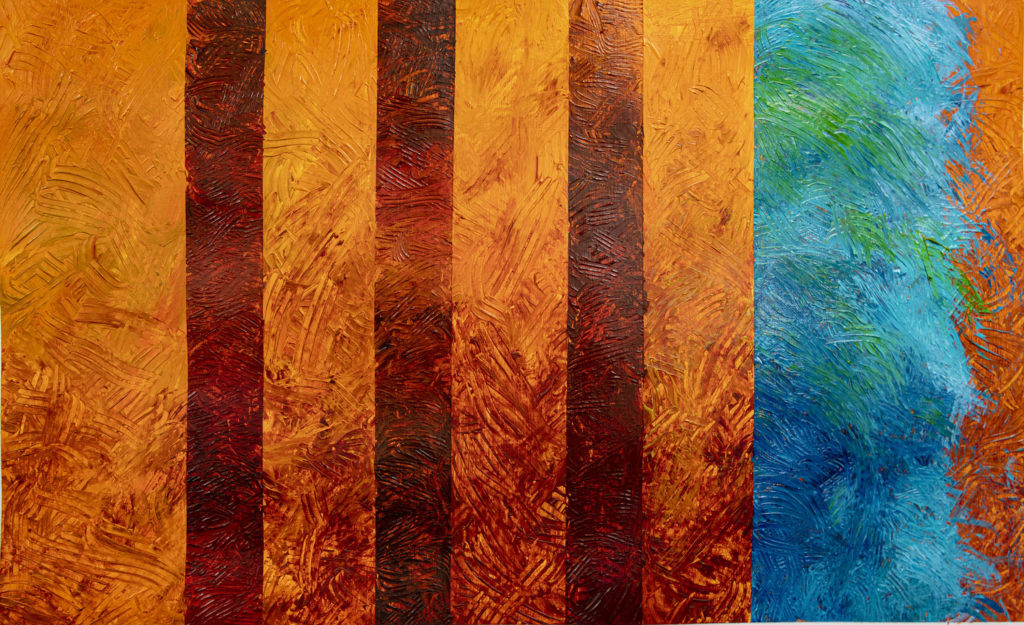 There is a history here with the Environment Agency. Some of what I know is hearsay, some from simple observation, some from public reports. It seems that the Agency, given the job of protecting Britain’s coastline, was making choices about where to spend its limited funds (apart from on offices and administration of course). A while ago it announced it would no longer take any action on the Cuckmere but would allow the area between the sea and inland villages like Alfriston to become tidal marsh land. It explicitly would not pay anything for the defence of the Coastguard Cottages despite their worldwide fame as an icon of the English coast adjacent to the Seven Sisters. 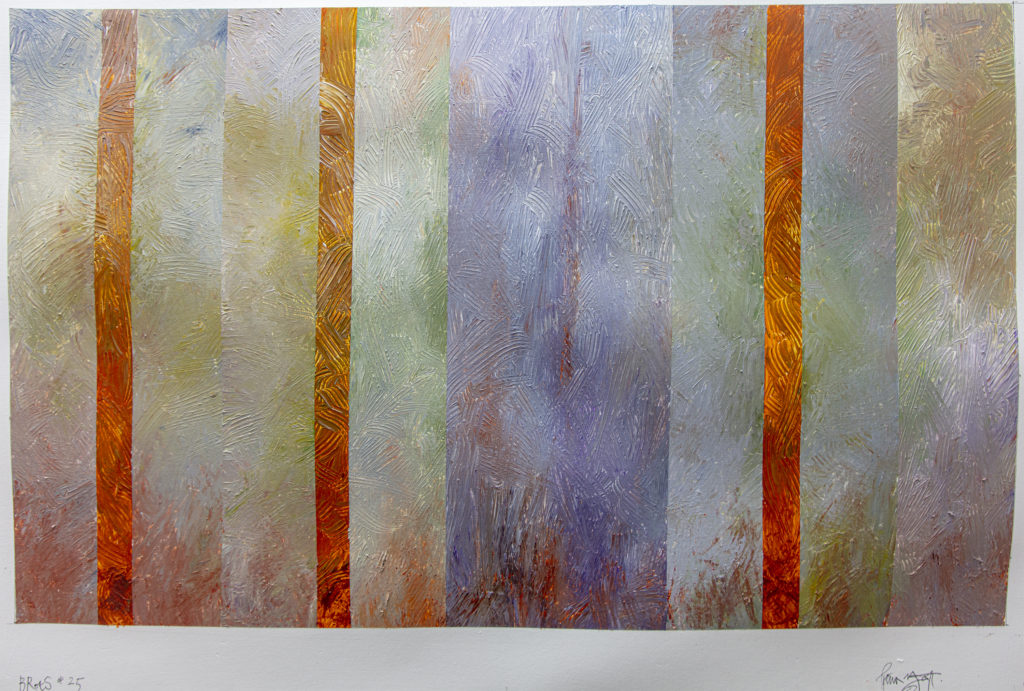 The Agency came unstuck very rapidly as a dry hot summer (this is the sunniest place in England) led to low and weak flows on the Cuckmere. Its mouth blocked by shingle, fish began to die in the river, and it began to stink. The result was volunteers turned out with spades to dig it clear, and a local man turned up with his own backhoe and helped. Shamed by the publicity the EA was forced to intervene to clear the river mouth. There has now ensued a fight over who is to maintain this area with local organisation vying to take responsibility (and funding) away from the Environment Agency to maintain it to local benefit, bearing in mind not just the threat to local villages and property but also the half a million tourists who visit the area. 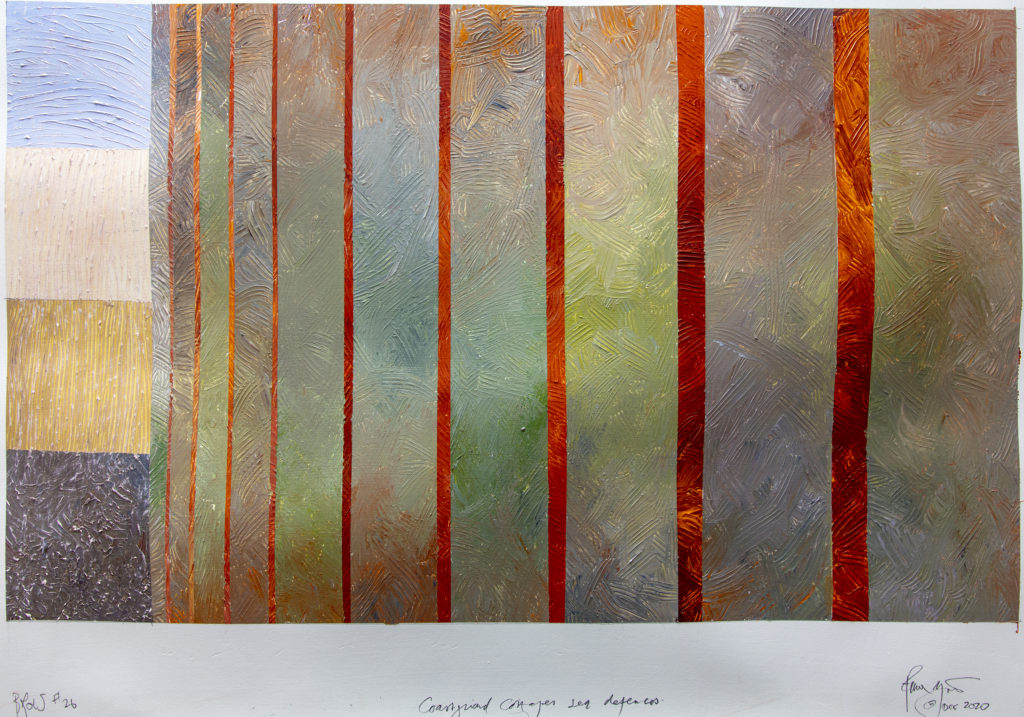 Whilst bureaucrats argue, the erosion doesn’t wait a decision and the owners of the Coastguard Cottages have raised some money towards the protection of their properties and have engage in their own contest with authority. My walk this morning revealed how far the erosion has gone and how limited the efforts made so far have been.

My paintings hold true to the imagery.  Of course, it has changed since I was last here over a year ago, the biggest single shock being the disappearance of the century old timber groynes. Some remnants remain, draped, inevitably, in the discarded fishing gear. Some of the BRotS have gone too exposing the concrete behind as has happened on the Seaford’s pier. The colour and vitality I see in the rusting metal is still there. 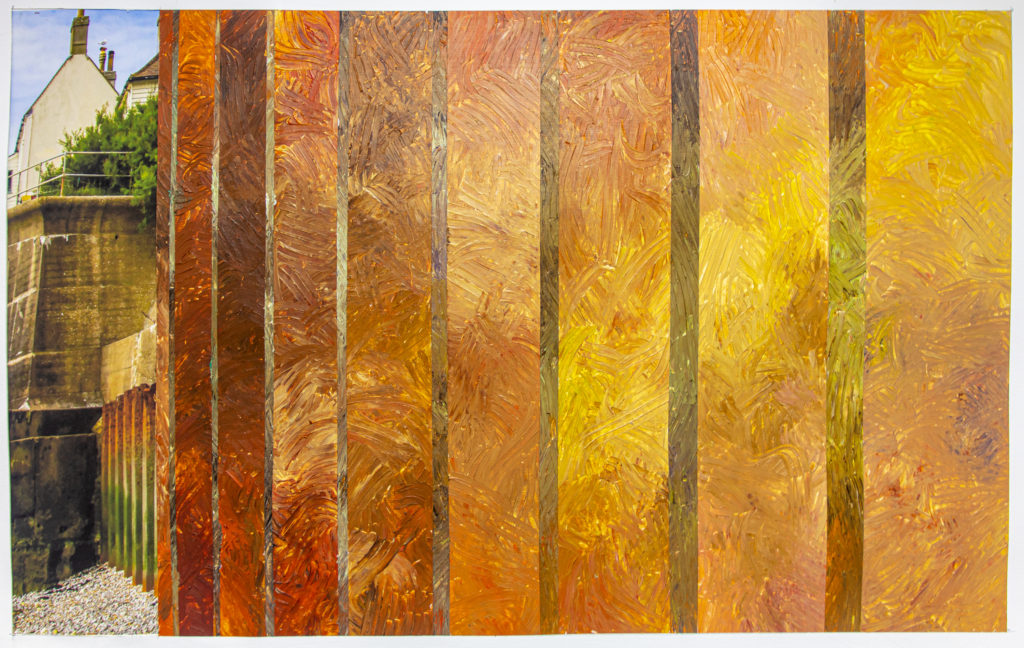 I finished my last blog with the image of the Cottages on a large canvas, and I was pretty unhappy with it as a result. I have been reworking it looking at other ways of recording the Cottages. I have maintained the diminishing spaces that described the arc of the metalwork and played with varying the colour (more to come there too I think) but have worked quickly through variations on paper. Finally, I mixed photography and painting, as I did with the ‘Four Seasons’ imagery of a few years ago. I printed out a section of the photo of the Cuckmere BRotS and the Coast Guard Cottages to a scale that fitted with my paintings on the heavy cartridge. I print photographs on to St. Cuthbert’s ‘Bockingford’ paper using archival museum quality inks at high definition. With the painted images at 16.5 inches in width I was able to size a section of photoprint to fit into the painting.

Mixing abstraction and reality on the canvas didn’t work, mainly I think because it was so badly done. Mea Culpa. This time with more drawing preparation the result was better than the one done with the symbolic representation of the cottages by coloured squares.  The approach of mixing reality with abstraction has been done many times before of course, most notably in recent years by Patrick Caulfield, and there is a lovely example in the collection of Eastbourne’s Towner gallery.

My walk this morning was productive. I will push further with the imagery and may also mine my images of the missing timber groynes to see whether I can generate some differing images from there, images that at the back of my mind can link into some of my other previous workings. 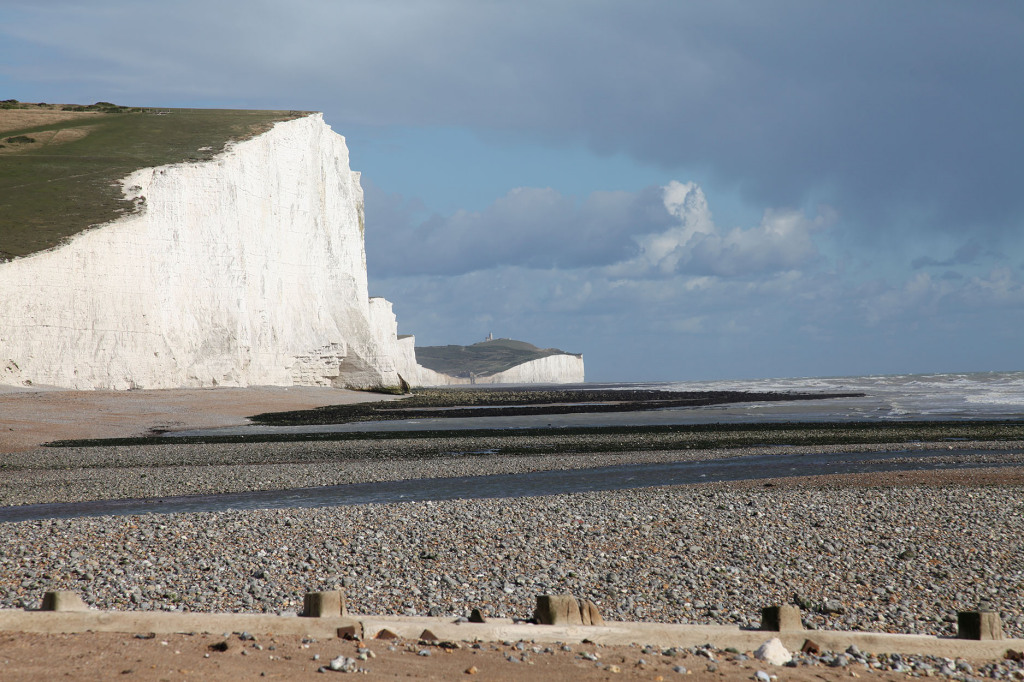 As for the Environment Agency – well for me, they need a good kick in the arras, along with the other bureaucrats overseeing the destruction of this favourite TV and film location. If you share my views then I’m sure you would be happy to donate to the fighting fund that has been created at the Cuckmere Haven SOS website.

You can follow me on twitter Patrick A. Goff (@patricktheart) . You can browse and buy the paintings at Products | PatrickGoff.com