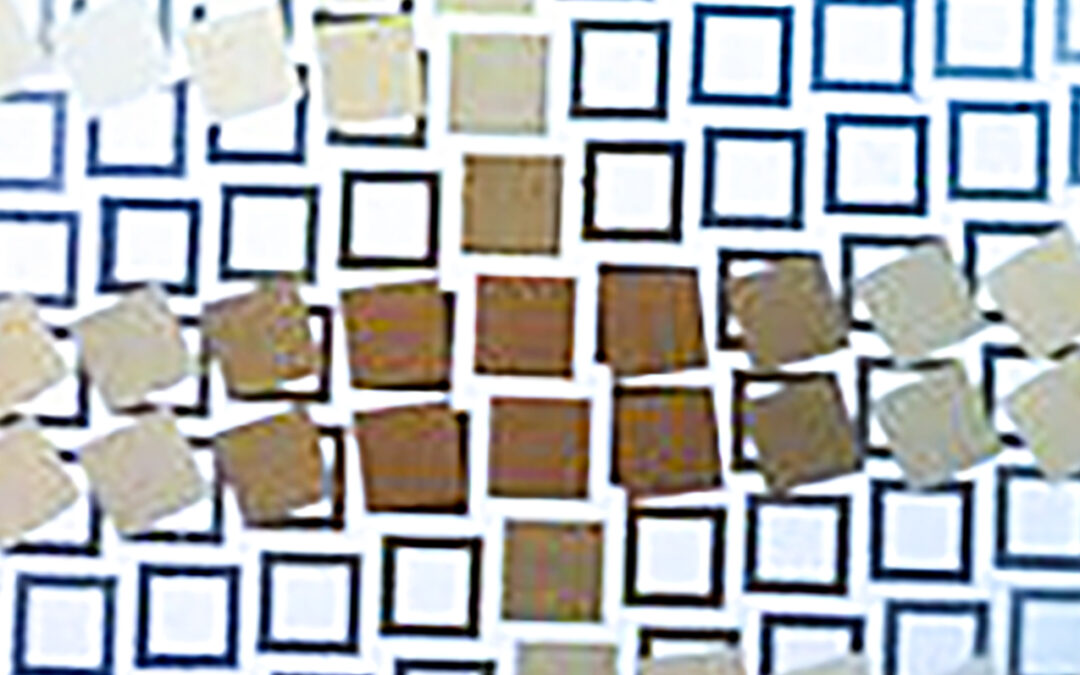 It is now over 50 years since I started at art college. It was also a different world as change has been and continues to be so fundamental to life and time passing. This is a little bit of a ‘look back in anger’ at the waste of opportunity led by generations of politicians without ideals or ideas.

You’ll know from my previous writings how broken my education was as the son of someone who served their Queen and Country for most of his life. I ended up haunting the art rooms in a grammar school I joined in the 6th form, unwanted among staff and students who had grown up together for some years. They put up with me for a while, then started fixing up job interviews. Eventually I was offered a teaching post in a junior school.

I started in Cannock, living in ‘digs’, cycling to school each day. Paid without tax as I was labelled as a student assistant although I became a class teacher, which meant ironically, I took home more than a qualified experienced teacher did as I wasn’t taxed. It couldn’t last and I was interviewed for a ‘pre-Dip’ programme at Stafford School of Art. I entered another world at a propitious moment, but that moment, was it 1965 or 66, is a long, long, time ago on a distant planet far, far away. How have the hopes and fears of my generation been so betrayed in those 57 years of the Empires decline?

Stafford is a great example of an art college in a small provincial town in the heart of England and stands as a symbol of everything that has gone wrong in art education, and how elitism has stolen opportunity from many. Typical of local FE/art colleges it has been closed, as indeed has the college in Seaford, where I live, and both are now flats. The college grew out of the Victorian ideal that local industries needed ideas for products and design to challenge the growing strength of their industrial rivals. Having nurtured the Industrial Revolution, England as a manufacturing powerhouse was being overtaken by competitors like Germany and the United States. It was losing its position as the largest manufacturing industrial centre but was a country whose growing population was still moving from the pastoral work in the countryside to the expanding work force in the towns and cities the industrial revolution had spawned. 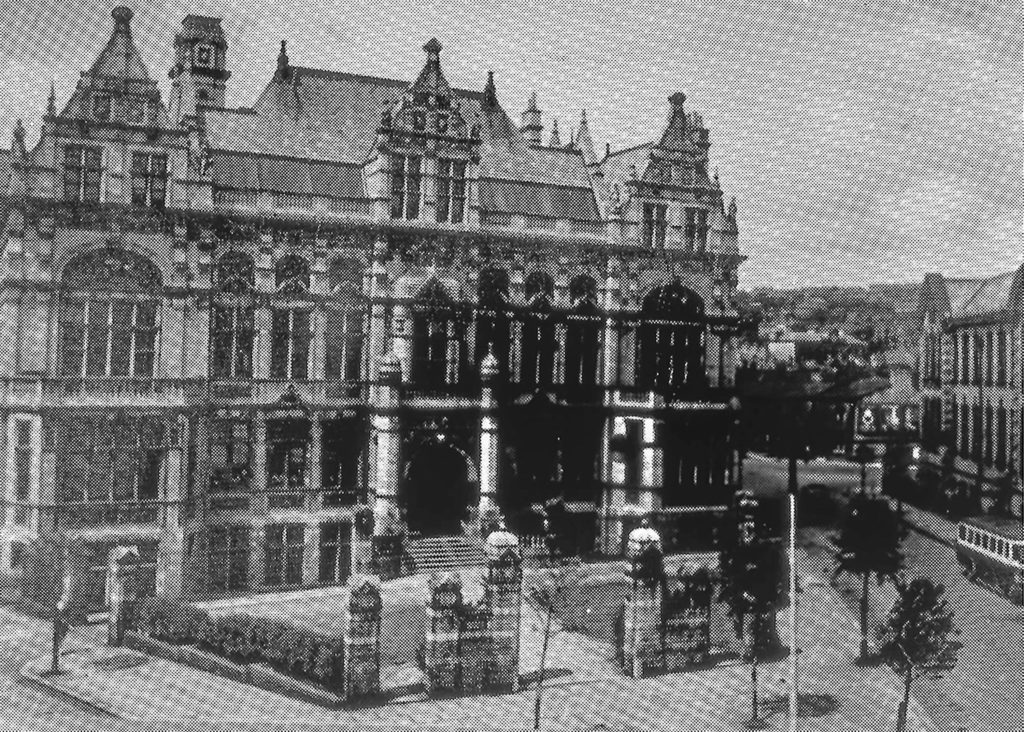 19th Century educationalists saw the need for centres of innovative, creative thought to add to the inventive technical prowess of the English and buttress the manufacturing with design and innovation. So those clever Victorians created the local art colleges to be centres of revolutionary thinking in all their local manufacturing communities. Some of these grew into major international design centres related to their local industries – Stoke for ceramics, High Wycombe for furniture, London’s Cordwainers for shoemakers and so on. Others like colleges I studied in or taught at such as Stafford or Blackburn became centres of enablement – Blackburn was at one stage one of only two colleges that had a weaving shed to support the English textile industry but ironically parents saw the college as a way to keep their kids from mill work – education was a key to social mobility

The small colleges worked hard to provide pathways to local kids to move into the world of art and design in the broadest sense, not in the narrow interpretation placed on it by universities. Courses grew out of local industry and as those industries grew, like graphics or photography (Blackburn was once a centre of the UK film industry) so courses linked and developed national structures, students moving regionally or nationally as centres of excellence grew (or shrank, depending on management).  Growing as they did these courses looked not only at academic attainment but at creative abilities, providing pathways for those with disabilities that otherwise prevented them pursuing careers in areas that offered them exceptional opportunities to flourish using their creative skills.

I can give a very clear example of this at work. As head of Creative Studies (art and design, floristry and P.E.) at Southwark college from 1980 – 85 I was asked to work with a specialist unit at the Mary Ward centre in Inner London. Students with speech and hearing difficulties were assessed and working with an inspirational head there, we set up a path where for every group of 15 students on our vocational programmes we took one of their assessed candidates (they did go through a ‘normal’ interview with portfolio). I walked in on one of the interview panels after they signalled a little difficulty. The student they were interviewing had both speech and hearing difficulties compounded by his being French.

To cut a long tale short we accepted him, he did the two-year vocational programme successfully before returning to France. In small groups, intensively taught for 30 hours a week, the other students forming his support group. Staff were professional, enthusiastic, support when needed was there from the Mary Ward centre.

Some years later, no longer teaching but running my own design practice I was asked with my partner to present design drawings for a new furniture range to the client, a large northern manufacturer. Rather than going north we were invited for the weekend to their apartment in Nice. On the 2nd evening we dined with them and their French bank manager in a beach side fish restaurant on the shore of the Mediterranean just outside Nice. There we were regaled with the tale of how the English FE/art college system had saved their son with a range of verbal and hearing difficulties, who was now working as a senior designer in a Paris based design house. It was the same lad I had taken part in interviewing. Kisses? My god the gratitude and drink flowed!! Education had indeed proved an enabler – and the parents pointed out this could not have happened in the French system. I would question whether this could happen today under our current ‘system’.

The colleges did more than provide the pathways. They worked with professional bodies and industry to develop vocational programmes which came to rival degrees in the intensity and depth of the education they provided but taught in a practical way using workshops and studios rather than classrooms and theory. Pioneering approaches included having the final year students assessed to gain professional was well as educational certificates, bringing practicing professionals into the studios as part time lecturers, both judging and encouraging, offering work placements, and generally helping ensure students understood what professional practice implied whilst helping full time staff keep industrial skills up to date. 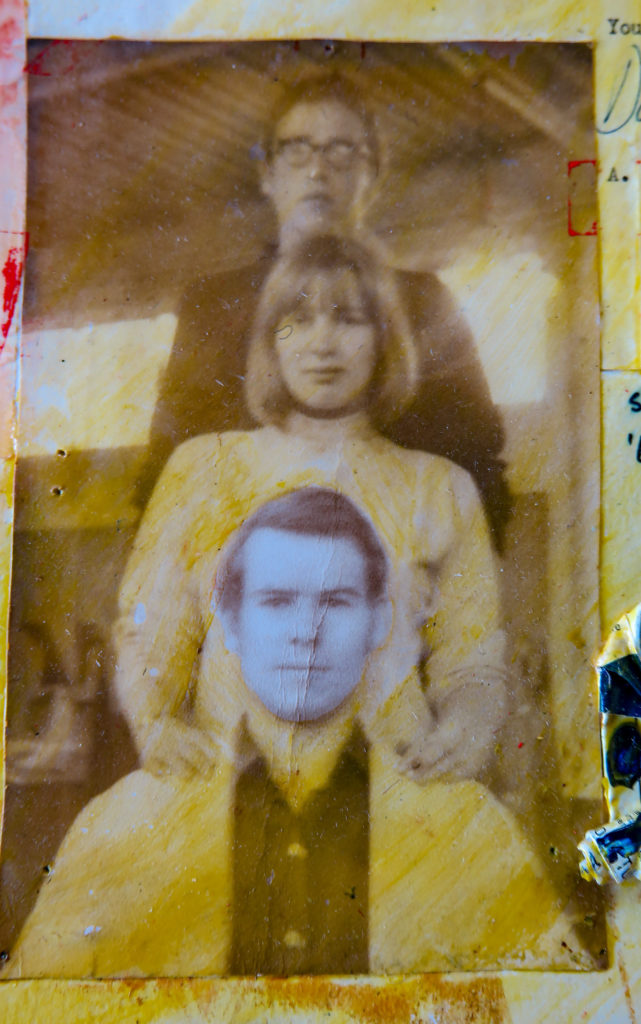 From top to bottom: Pre-Dip 1966   Rick, now I’m told a wealthy music entrepreneur living in Richmond-on Thames; Dorothea who famously lip read remarks about her and exacted retribution; myself before my hair grew

Many a student with no formal educational qualifications rose to senior levels in design industries whilst the fine arts flourished in colleges where professional artists provided insights and studios often provided supervised workspaces from early morning to late night. My own experience through both pre-Dip as it was called and the 3-year degree programme was of intense teaching of life drawing, colour handling etc.  taught by leading artists – amongst those involved on my courses were Heath, Hughes, Kidner, Simpson, Tillyer as well as visitors such as Jim Dine. Nor were they narrow – visitors such as Ravi Shankar and other musicians and poets, mathematicians and philosophers saw to that.

Out of such intense (taught for 32 hours a week) atmosphere, talent broke or blossomed. It is no coincidence that the brightest flowering of English culture names in the 1960’s and 70’s came as the art college influence on industry, design, music and the new media world grew strongly and vibrantly. Historians, I have heard, say that every Empire has a creative blossoming for some 50 years after the end of the Empire. Perhaps in Britain this was true through until the loss of self-belief in our political and educational elites destroyed its foundations along with the centres of revolutionary thought the local art colleges had been. Can we say from 1950 until 2000 was our time, Britain’s golden glow of cultural achievement? 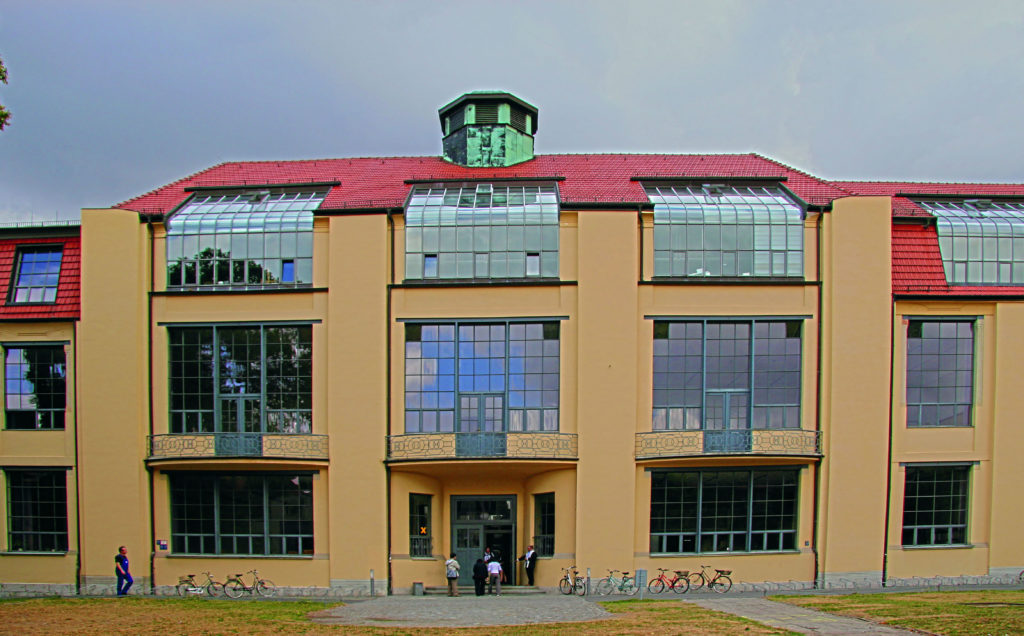 The original Weimar Art School built between 1904 and 1911, reinvented as the Bauhaus by Gropius in 1919

What has happened to the art college system to remove this creative glow? Many say it hasn’t been destroyed but merged with the Universities, but the ethos of a university is totally different as is the teaching regime.  The creative glow is quickly fading in a country that I no longer see confident, constantly allowing non-entities in the UN or EU to belittle us and the cultural centre taken to the new empire across the Pond as ‘internationalism’ destroys the basis of our culture. The Bauhaus was pursued to oblivion by a German establishment in the 1930’s who considered its freedom and innovation to be inimical to their political beliefs. Here the subsuming of art colleges into the University system is achieving the same results for our own bourgeois ruling class.