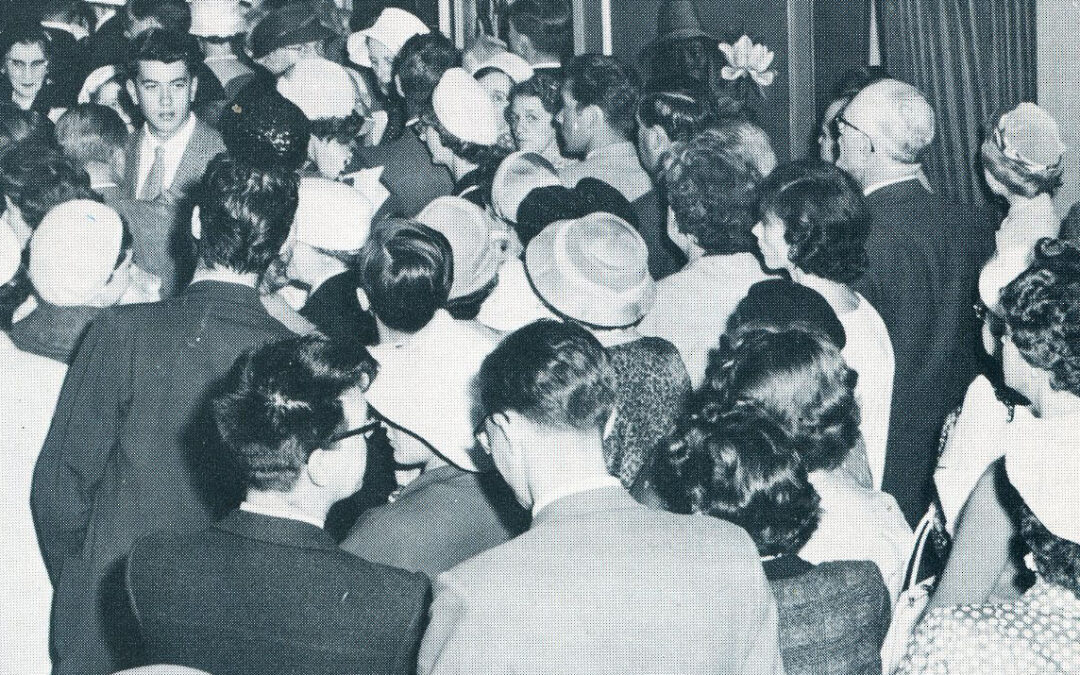 I sat in the garden thinking (I do that a lot, maybe too much) and remembering the trip to the South African Delaire vineyard to see one of the most popular iconic paintings of the 1950’s and 60’s. Some say it rivals the Mona Lisa as a painting…(cough)… I remember sitting in a garden listening to the noisiest bird in the Western Cape, the Ha-di-Ha, a form of Ibis, mulling over the painting’s popularity. Does popularity equate to high quality or is it down to lowest common denominator? 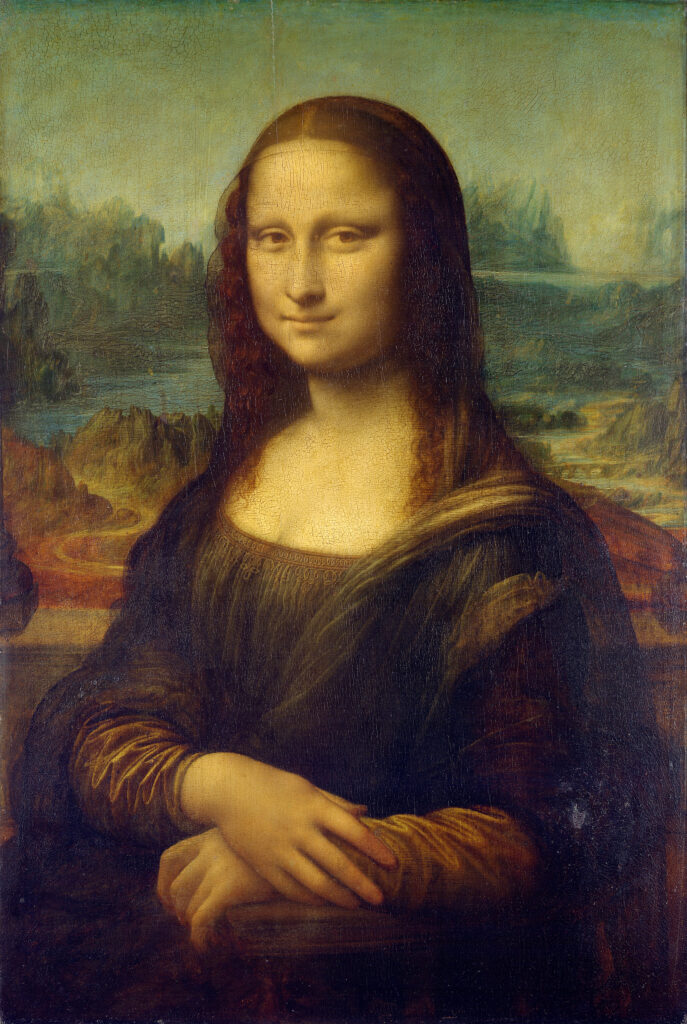 The robin sang from the top of the ash, mainly a solo performance although occasionally the blackbird would join to make a duet, more tuneful than the Ha-di-Ha. A whistle of pinions, a streak of greys black and a touch of purple as a pigeon flew across the garden. She had her eye on the darting sparrows busily taking feed from the bird feeder, as for every beakful they dropped a load beneath, and she knew that was lunch. Wings spread as air brakes she settled in the neighbouring pine from where she could see into three or four gardens and judge which provided the easiest feed.Mona

In Russian folk lore a pigeon is a sign of good fortune and the artist of the ‘Chinese Lady’ believed that whenever his career was going through a bad patch his problems solved themselves at the same time as a pigeon arrived, as if by magic, which explains why he frequently had a pigeon perched in his studio. To many the pigeon is a pest, the lowest common denominator of the avian world. 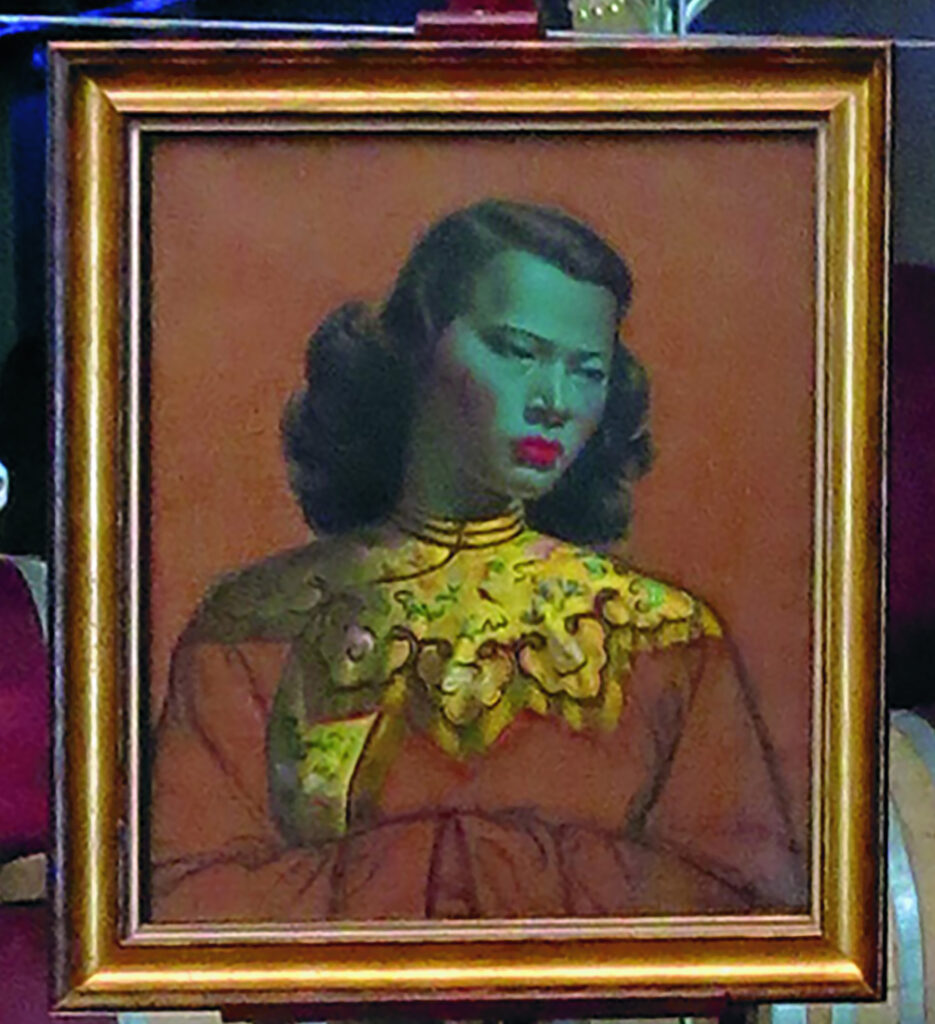 Photographed against the barrels of the wine tasting area at Delaire

The hen had barely settled when ‘her pigeon’ arrived. Perhaps bringing unwelcome attention. The newcomer bobbed his head, the preliminary ‘hello babe’ that every male pigeon employed as part of his daily seduction round. She ignored him. For a moment he just looked, but she hadn’t flown, so heyho … The crooning, she thought, he’s bloody crooning – and he’s bobbing his head too…so she shuffled a few inches sideways hoping he would get the ‘not interested’ message.

The artist also believed it to be bad luck to reverse course after starting a journey, so important to persist with an endeavour once started. Artists persist with their own perceptions rather than following a crowd, don’t they? The question though is ‘will it sell’, and if it does sell does that mean it is good? 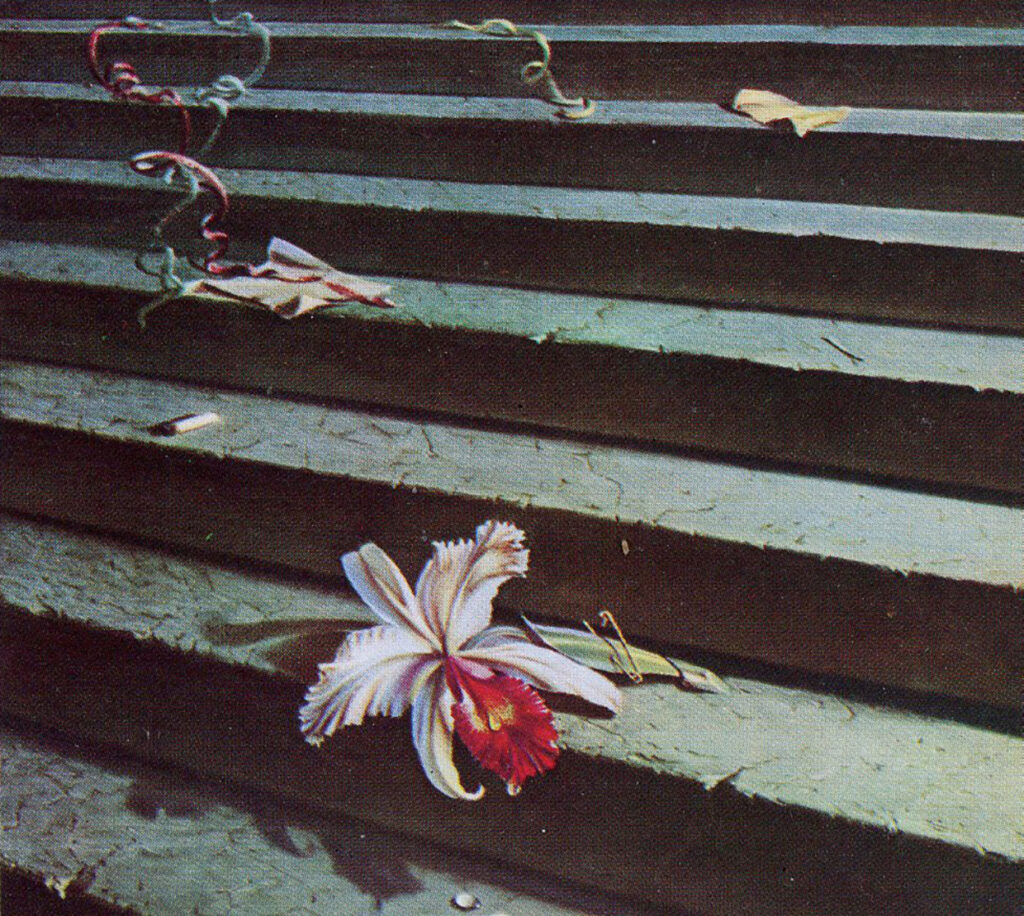 The cock puffed up his chest, crooning more loudly and made a clumsy move towards her. She shuffled further along the branch. His crooning grew louder, his bobbing and bowing a little more frenetic. ‘C’mon babe, let’s do it’ was the basic message. Very basic. More insistent. Not romance just lust. The ‘look at me’ syndrome that confuses audience attention with admiration. Seeking to shock has always been a way of stimulating sales, creating an audience. Part of our consumer society is to always be searching to impress rather than focussing on anything of real value or permanence – what worth will future generations see in an unmade bed? Are artists seeking attention and approbation with the same hunger the pigeon seeks sex? Does a tree fall in the forest etc..

Fleeing Russia was just the beginning of Trechikoff’s journey to Harrods. He had to flee again as the Japanese invaded Singapore and the bombing started. His job as cartoonist on the ‘Straits Times’ was over as the British surrendered. But the Javanese girls he found irresistibly beautiful. 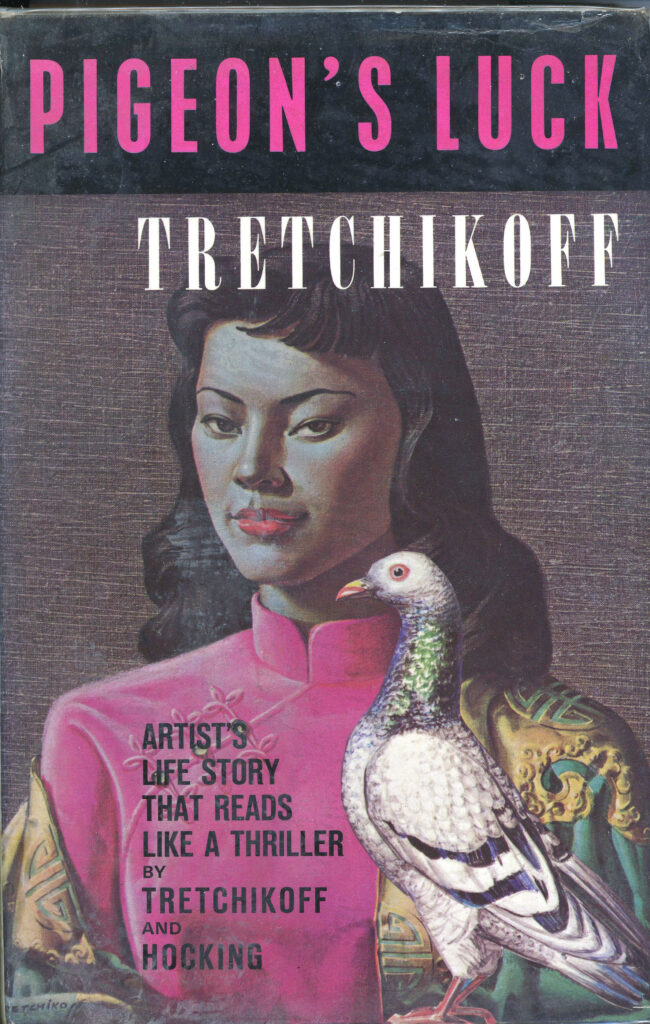 The pigeon had had enough and as he rose to settle on her she shot off the branch in a dive for the garden below. Caught with his pants down the feathered fornicator plunged after he with all the grace of a drunk on a Saturday night ‘pull’. A grey gull barked at him from a neighbouring chimney pot. A magpie laughed as he snapped a shield bug from a neighbouring bush. The harsh cackle of crows followed as they mocked too – not averse to hunting a pigeon for their lunch, today they had no energy for the inevitable chase. Like the Press, they spectate, looking for the opportunity to make a buck themselves – never mind the quality, feel the hunger.

The cackle of ‘serious’ critics didn’t stop thousands of people visiting this artist’s 1952 exhibition after the war, showing all the canvases he produced whilst in ‘lock-down’ under the Japanese invasion – in numbers unmatched by the Royal Academy galleries of ‘serious’ art for over 40 years, raising those interesting questions on the perceptions of quality in the art world and amongst the public audience for art. 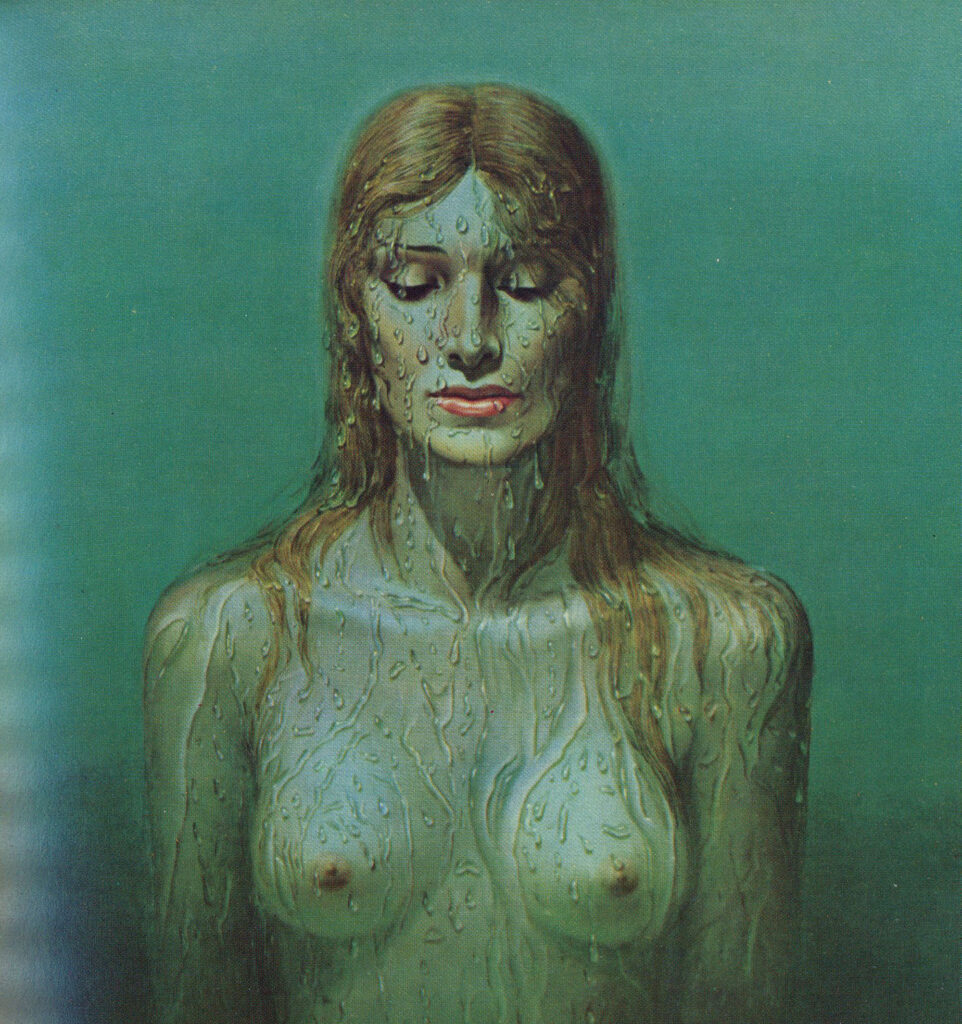 Meanwhile back below the feeding sparrows the blackbird feasted on the fallen seed – one birds loss is another’s gain. The colonists’ misfortunes played to the Russian artists advantage, the Russian birthplace he had fled from giving him some insulation from the Japanese invader’s depredations, and his neutrality making the colonists losses his gain. In a Britain grey after the war his art attracted black and white TV coverage, there was no colour transmission to show his use of colour, perhaps fortunately?

Critics and fellow artists alike laugh when I ask, ‘who was the most reproduced artist of the 20th century’? In his biographical true tale, the artist ‘s life illustrates the ability to use skills and adjust to circumstances, the creativity of thought that art inculcates. Adapting to the traps that life can spring is the mark of a true creative mind and I bless the 1960s training that has enabled me in turn to move from busman to college lecturer, from jobbing screenprinter to creator and editor of a successful magazine, from bar cellarman to exhibiting artist, but Trechikoff was the survivor par excellence.

He also had the ability to see that producing a reproduction print of his ‘Chinese Lady’ and getting it into stores would result in sales which made it the most reproduced painting of the 20th Century. His show in Harrods attracted 250,000 people, repeated in Birmingham, his show in Cape Town as a precursor had queues down the street and he charged an entry fee

Ivan Trechikoff biography, ‘Pigeons Luck’ published by Collins in 1973in tells this tale of survival and unscrupulous exploitation that takes him from the fall of Singapore to being the most reproduced artist in the 20th century. Some estimates have it the Chinese Lady image sold through stores on the Highstreet, sold 2.5 million copies…

This ‘iconic’ painting came to auction where it was bought for a reputed million dollars and returned to his final homeland in Delaire South African winery. All artists need a bit of ‘pigeons’ luck’. Me? I prefer Monet, Caulfield, Nash, Hitchens – in fact any number of other painters, but then I don’t have my own pigeon. But I think I do have some objective artistic standards, its not just about taste. Is it?

I am waiting my luck changing as I do have pigeons nesting and crooning on my roof.