“the Channel in the mad March days” 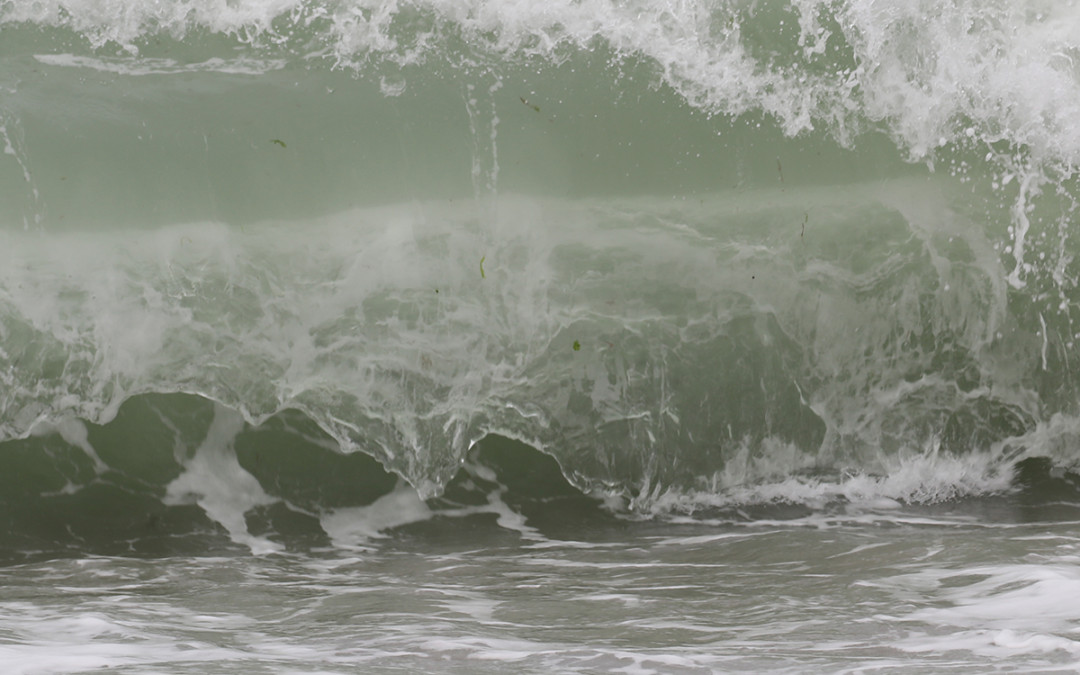 As a boy the one poem I learned off by heart was John Masefield’s ‘Cargoes’. In particular one stanza stuck in my mind, a description of Channel traffic probably inspired by Masefield’s own days at sea, and first published in 1902.

Butting through the Channel in the mad March days,

With a cargo of Tyne coal,

Of course the industries these coasters served are long gone to foreign parts. The coasters themselves have vanished save the examples left in Museums. Now looking some 12 miles out to sea, where the westward bound lane of Channel shipping can be seen, ships passing look like huge blocks of flats laden with containers which wrecks along the English coast in recent years have shown to be full of diverse products such as Lego, engineered timber planks or BMW motorcycles. 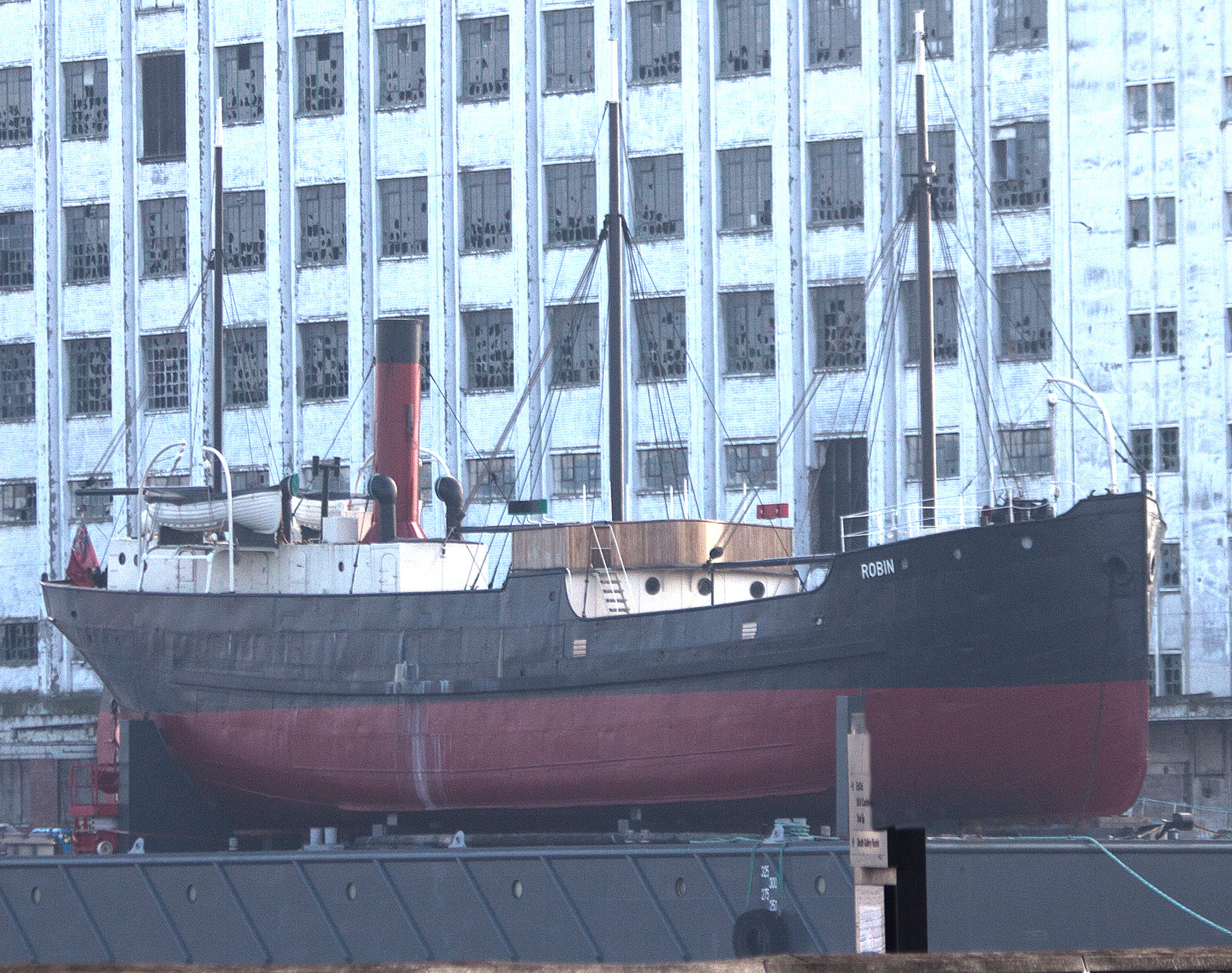 Once a dirty British coaster from the days of steam, with its open bridge, here preserved in front of a flour mill it used to provide with grain

Newhaven harbour used to be a busy coaster port, left behind by larger more modern places  needed to dock the huge vessels used today, and in decline. A ferry still runs to Dieppe, tracing the route taken by some 6,500 Canadians in WW2 in the disastrous dress rehearsal for D-Day that started from here. Almost 70% of the forces landed on the Normandy beaches were British or Commonwealth soldiers (notwithstanding the pretensions of American historians) and the lessons learned so painfully at Dieppe saved many lives. 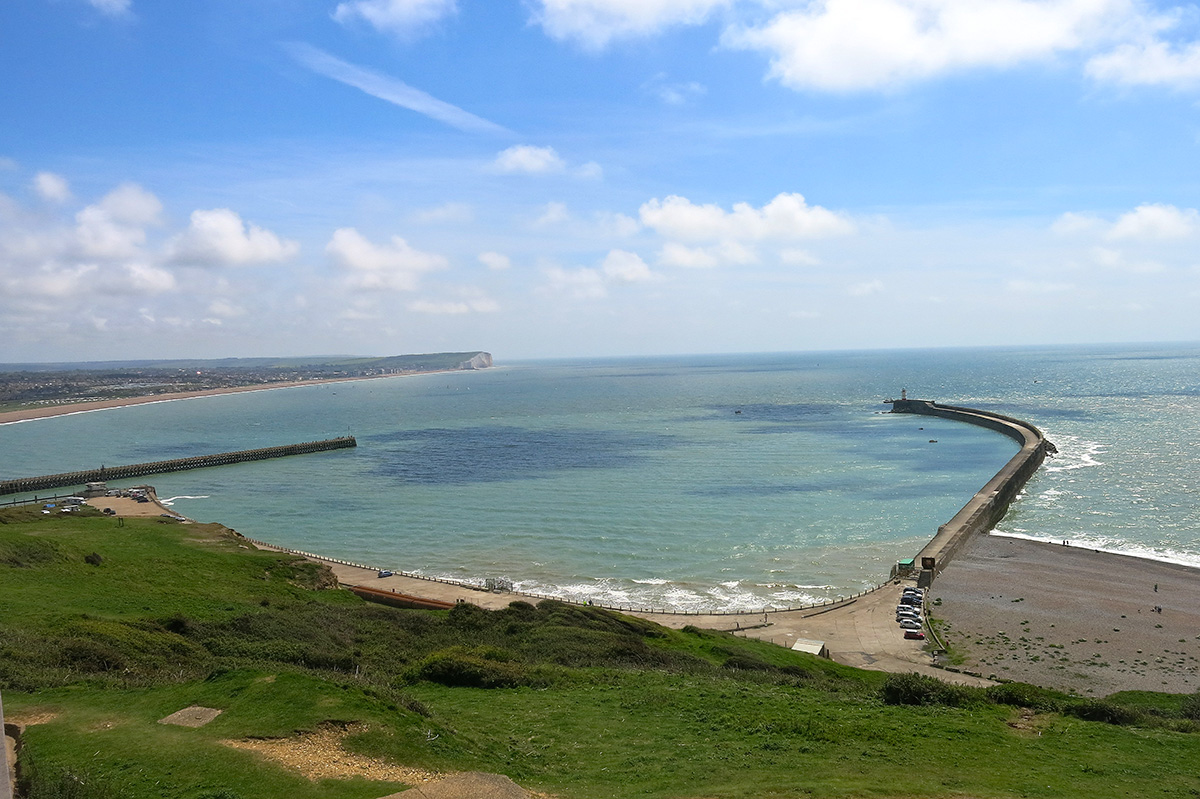 Looking across the bay housing now occupies sites where in 1916 tented camps housed troops waiting to go to war – troops that mutinied and rampaged through Seaford when an Atlantic gale roared up the Channel and blew away their tents, leaving many of them naked if contemporary accounts are to be believed. The golf course has pill boxes as well as bunkers, and the chalk cliffs are honeycombed with underground defensive works. 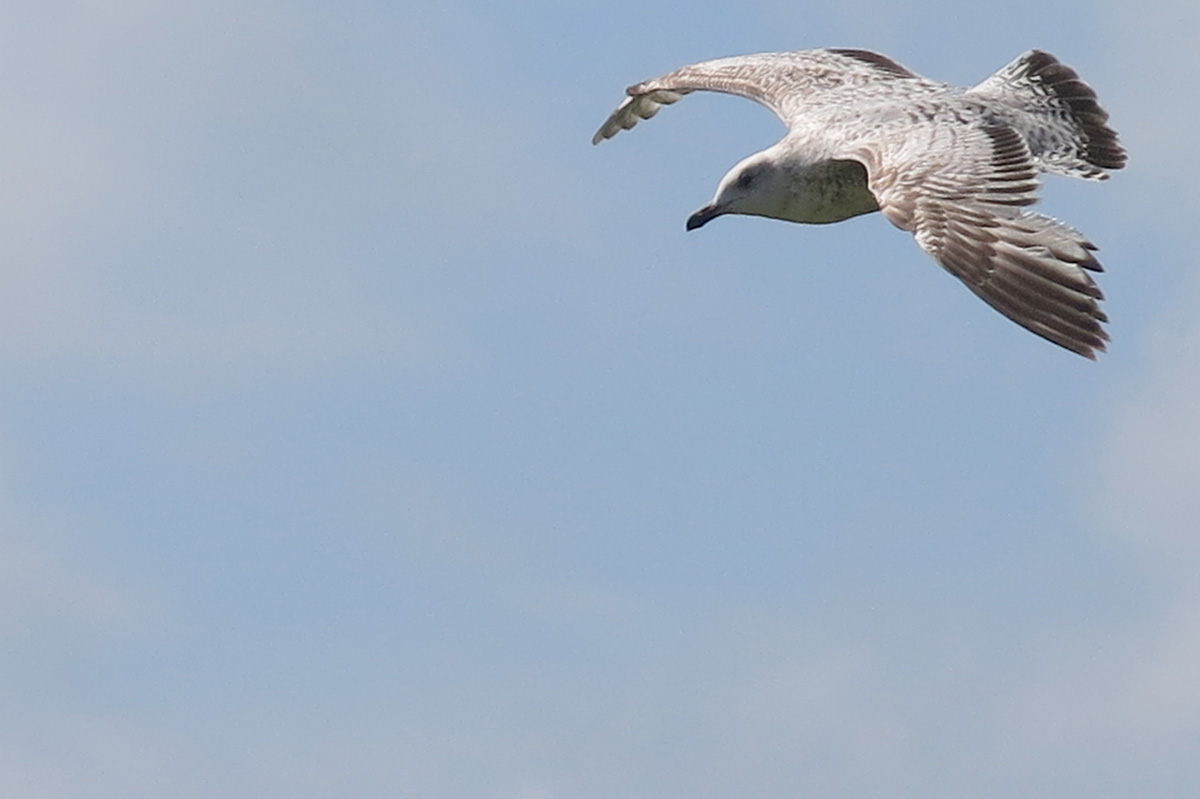 My own idyllic garden stands where huts once stood as billets, and the craft that fly over the cliffs are now the hangliders of modern leisure flyers, the purr of Merlins occasionally summoned from collective memories by an exhibition flight of Spitfire or Hurricane. Now the bay is full of people enjoying a varied leisure time, no longer working 7 day weeks, no longer working 16hour days. Instead they enjoy a rich life and in doing so add to the visual tapestry of other lives.

Riding the updraft from teh cliffs below

Now the shipping carries the products of Europe to the far corners of the globe in return for its riches, no “quinquiremes of Nineveh from distant Ophir” but canoes paddled down the river from distant Lewes, or power boats from Brighton marina. The wrecks off this coast are testament to the dangers of the onshore storms that frequently blow, as well as to the ancient wrecking traditions of Seaford folk in the 13th and 14th centuries. 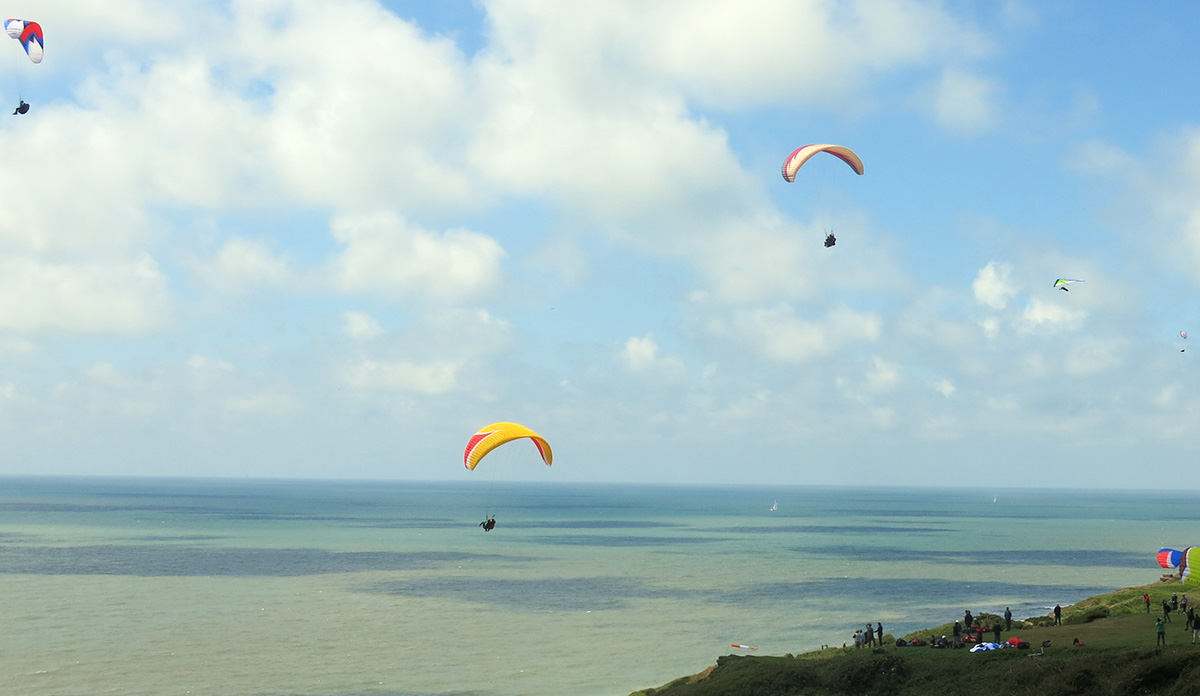 I counted 18 in the air at the same time

Yet still 70% of trade goes by sea, much carried through the Channel, a modern seafarers motorway. No longer

Dipping through the Tropics by the palm-green shores,

With a cargo of diamonds,

Topazes, and cinnamon, and gold moidores.

Now is the ‘Côte d’Alabastre’ unloading camper vans and tourists with personal loads of French wines and cheeses, coming into Newhaven from France.  Nowadays we get our wines from Sainsbury’s, trucked in, not delivered by sea. 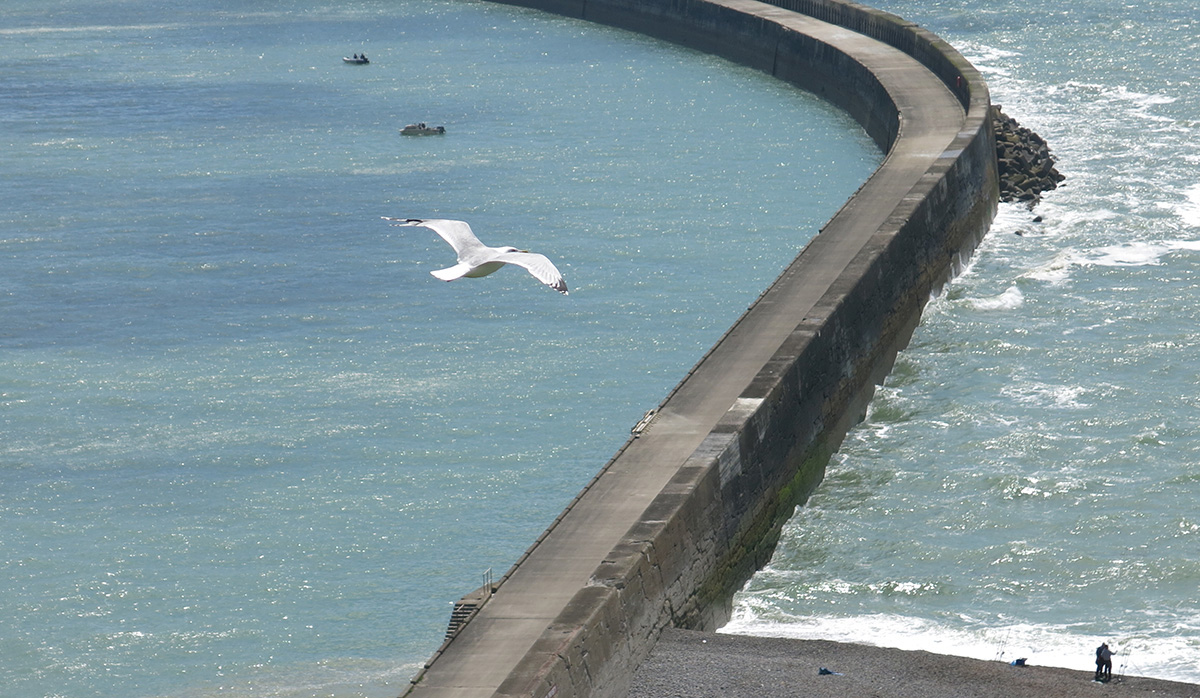 The romance of the sea and travel remains, and much as in Masefield’s day man sought to emulate the birds and fly, the para-gliders ascend along the cliff line trying to soar as the gulls so effortlessly do, whilst above the contrails left by the jet powered successors to the Wright flyer carry holidaymakers to the sunny shores Masefield alluded to.