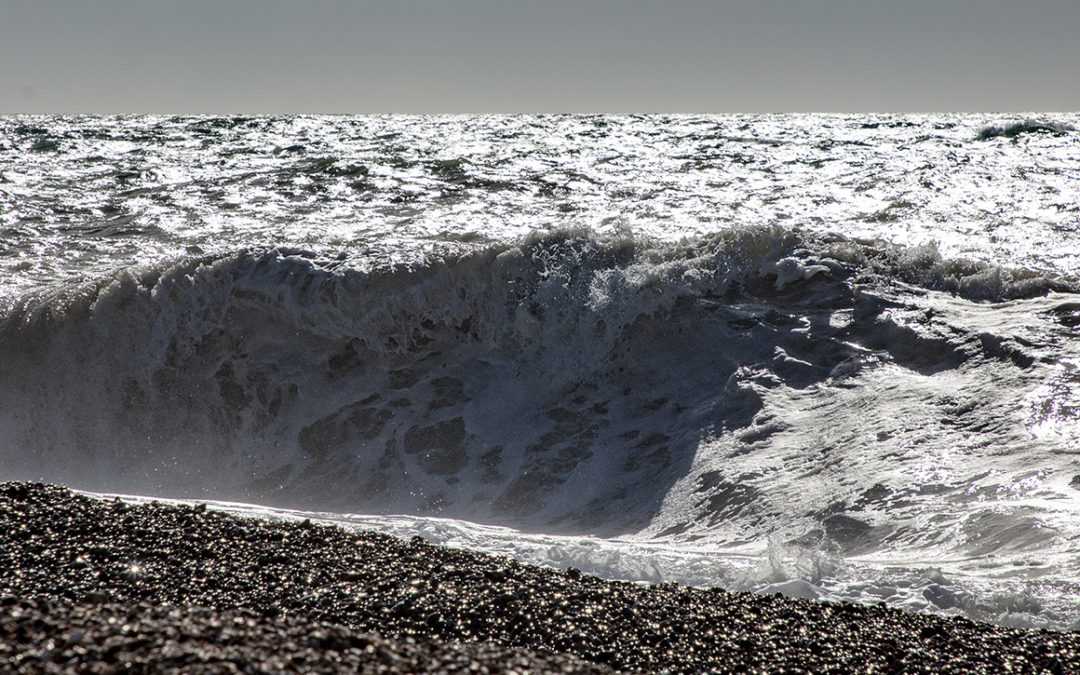 The Sayings origins are lost in the mists of time. It was stated in various ways from the sixteenth century on. Shakespeare’s version is close to the modern: “Beauty is bought by judgement of the eye”

Possibly the first exact statement of the cliché in print is widely credited to Margaret Wolfe Hungerford (née Hamilton), who wrote many books, often under the pseudonym of ‘The Duchess’. In Molly Bawn (1878) there’s the line “Beauty is in the eye of the beholder”

both the above are dictionary definitions

My partner is amused by my constant return to what I call the Bridget Riley of the Shingle (hereafter ‘BRotS’) on Seaford beach. I have tried to explain the visual fascination of this post-industrial construction in articles before, but it is difficult. I see the art in what to many is the ordinary. Taking what I see into a different context turns them into abstractions, art objects which link to the art history I have absorbed over the years. I see this ‘art’ in many areas of landscape, in many locales, and have delighted in sharing them through this blog (e.g. Landscape into Art) and my twitter feed. It is especially delightful to share beauty when we are all under lockdown.

Op Art qualities include repetition; change with each repeat; gradation of colour or light to creat and impression of movement (or in this case the mark of memory of wave action); Eastern side at low tide

My partners reaction to the BRotS is contrasted not only against mine but also against the reaction of others. One response was delight in a ’bit of rust’. So I want to break down what I is that is see in the metal wall cladding, and how I try to pick this up in my imagery, collected through the camera… I hope you will allow me to show beauty is indeed bought by judgement of the eye, a Shakespeare stated. After teaching in art college for 17+ years I think I would add that every eye can be educated to make judgements too as art appreciation can be acquired and understood much as a foreign language is.

A change in angle give the change in width of the stripe as well as movement, a device used by Riley in her own wave paintings

The rough weather this winter has, temporarily I hope, placed the original BRotS out of bounds for the moment as the cliff beside it crumbles and destroys the footpath on the western (Eastbourne) side. On the Seaford side of the wall the stripes are constrained by the higher level of the shingle and it was an opportunity to take new imagery ,enabled by both my breakout of lockdown and a very low tide, that allowed the collection and examination of these images and how they show the difference in the marks left by the passage of time, a difference that can be measured against previous imagery.. 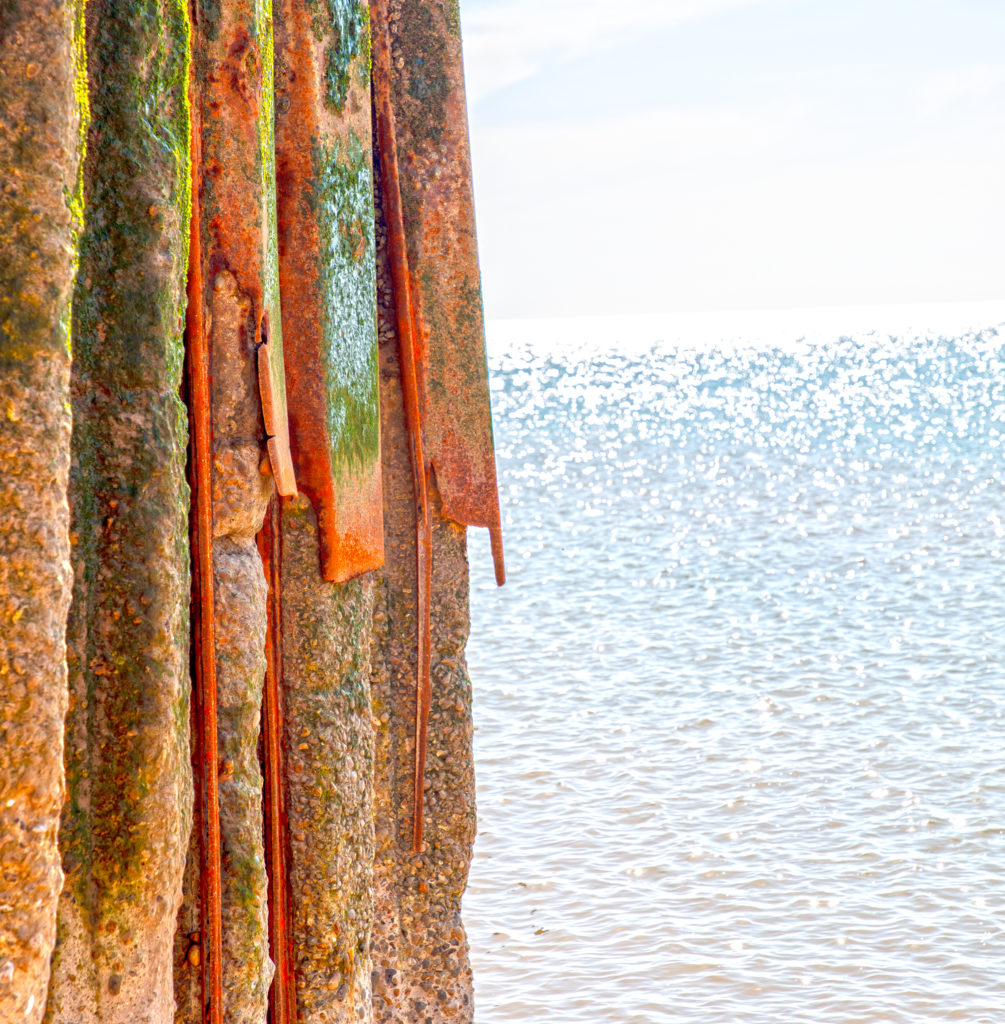 The sea so placid but when charged with a gale can send tons of stone laden waves hammering against the metal, ripping it from the concrete. Here is memory of violence of the ocean made visible

Whilst colour is an element of my appreciation of BRotS, it is the way in which they show the passage of time that is a driver of my curiosity too, and the changes that time makes that bring me to photograph them again and again. The BRotS were installed in the 1950’s as a sewer outfall pipe was concreted over as it was taken out to sea. The concrete was protected by metal sheeting and it is the gentle decay and rusting of theses sheets that make the colour and stripes I am so fascinated by. 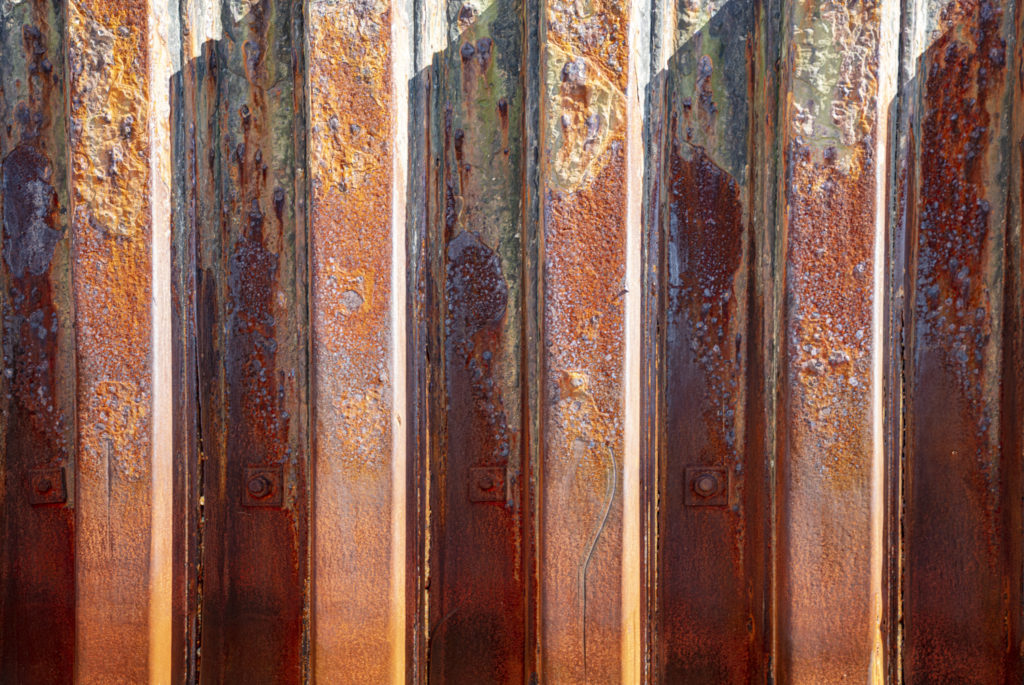 Sections can be seen, if the mind is willing, as flat paintings. The photograph renders imagery as flat relying on knowledge to see as 3D. The real experience can be viewed in much the same way as an art work on a gallery wall – with the added benefit of the ‘event structure’ of sound and movement

It is not just rust that causes change, and the colour changes with the level of immersion and how the metal is battered. In areas where the water against the pier is deeper the tidal rise and fall has allowed molluscs to grow on the metal, creating a further range of greys, whilst greens of algae against the orange rust in complimentary colour contrasts occur in the intermediate tidal zone. Where the metal is constantly battered by pebbles inthe breaking surf that blacks and purples appear as the underlying metal is laid bare for sea and salt to assail

Worthy of an undiscovered fortress of olde
These changes taken together are a measure of time passing. Rust itself can be measured and its colour indicates length of time. I am no scientist, but my untutored eye can make judgements based on the exposure of the metal to tidal and weather impacts and how it has changed. The pier itself stands on the westerly side some fifteen feet above low water, maybe more (my guesstimates), yet the whole structure can disappear under water in storm conditions. It is during these storms that the pebble loaded breakers can cause considerable damage, so that on the eastern side, which is battered by waves driven by prevailing winds, the metal sheeting is disappearing quite quickly.

Photographing the eastern (Newhaven) side revealed not only much more damage than on the western side, but also that colour changes through mollusc growth or algae are remarkably absent, probably because this side is battered more than the western (Eastbourne) side. The concrete is exposed in a way it is not on the opposite side and the pebbles rammed into the rust holes clearly show how this process, this attrition, is happening. There is a steady westward drift of currents along this coast and indeed the beach at Dungeness further round in Kent is growing as shingle from the Sussex beaches is washed along in the ‘coastal offshore drift’. So, Sussex shrinks as Kent grows… 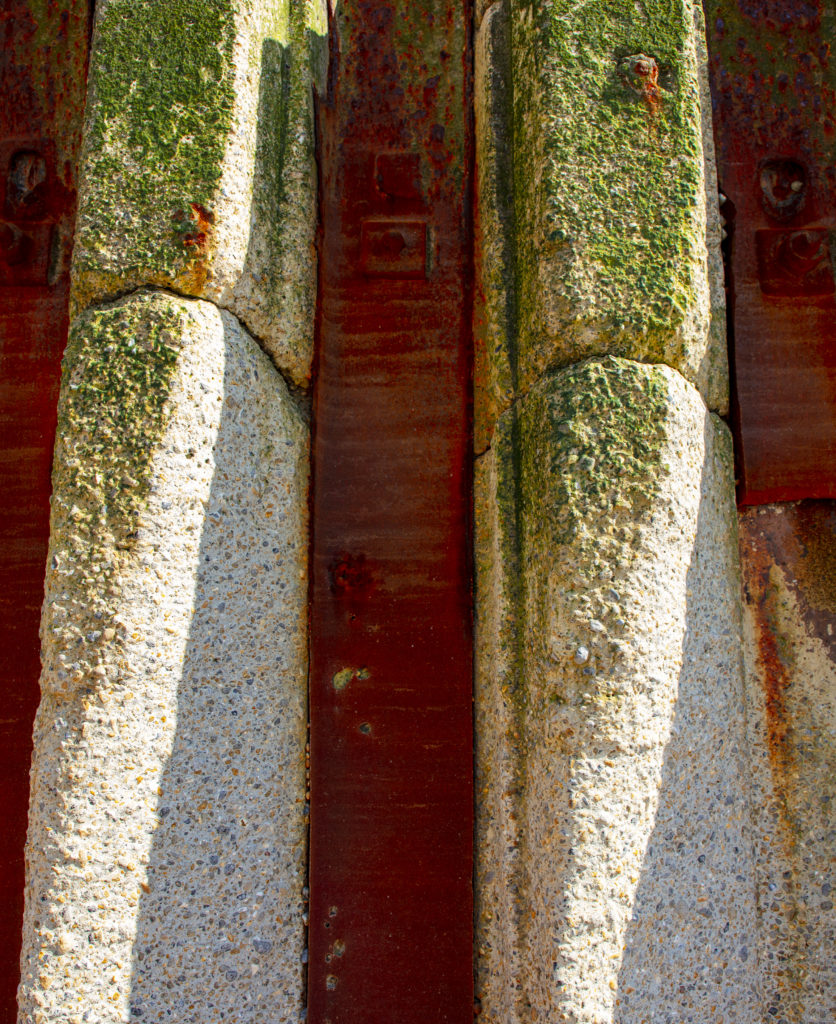 I have a small collection of fragments in my studio, broken off the pier by the sea, picked up off the shingle on my walks. I missed out on a larger almost man-sized piece to a keen seaside garden architect who snaffled a large section to use at home. The Environment Agency, the Water Board and the local authority argue about who is responsible for maintenance, with the result that none is carried out. The Environment Agency say they are satisfied with the condition of the ‘pier’ despite evidence that the underlying metal reinforcement bars in the concrete are now rusting, a process that will accelerate the destruction of the concreate already being made by the shingle laden breakers. Metal expands as it rusts forcing the concrete away and accelerating its breakdown.

Zoom in and you have a masterpiece by a modernist painter of abstraction – perhaps a Hoyland?

None of this bothers me – my life expectancy is shorter than that of the pier! Meantime I continue to enjoy taking photos of the changes and playing with them as imagery. In the previous articles (linked to above) I show some finished pieces but here are more, annotated to show why I think that are worthy of the description of ‘found art’. They are a damn site more aesthetically pleasing than a signed porcelain urinal. 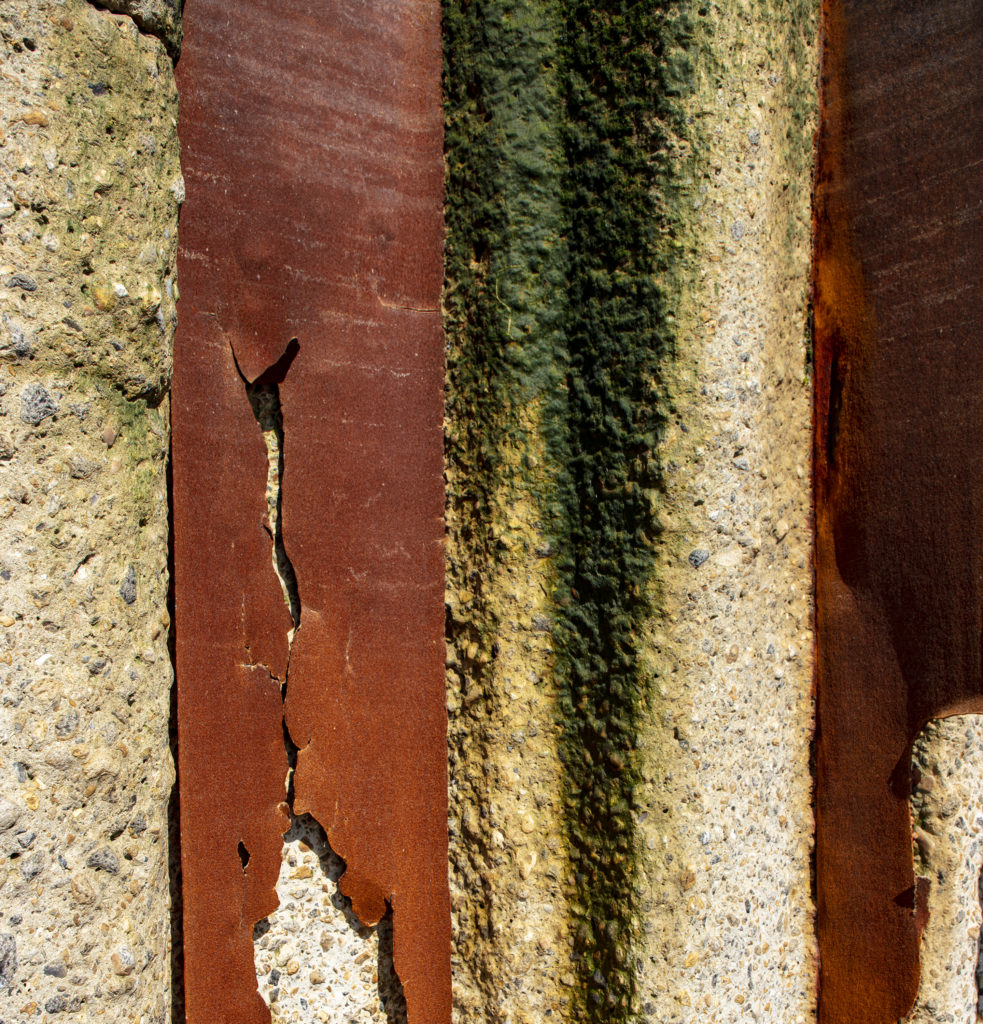 Beauty is an individual concept formed in part by social agreement, – you buy into what the media present, and what is current fashion. Maybe you will be baffled by my enjoyment of this piece of rusting beach architecture and agree with my partner who says in slight bemusement, ‘beauty is in the eye of the beholder’. Why not visit and judge for yourself when lockdown ends, just take a moment to contemplate, remembering that all art profits from spending time in contemplation… 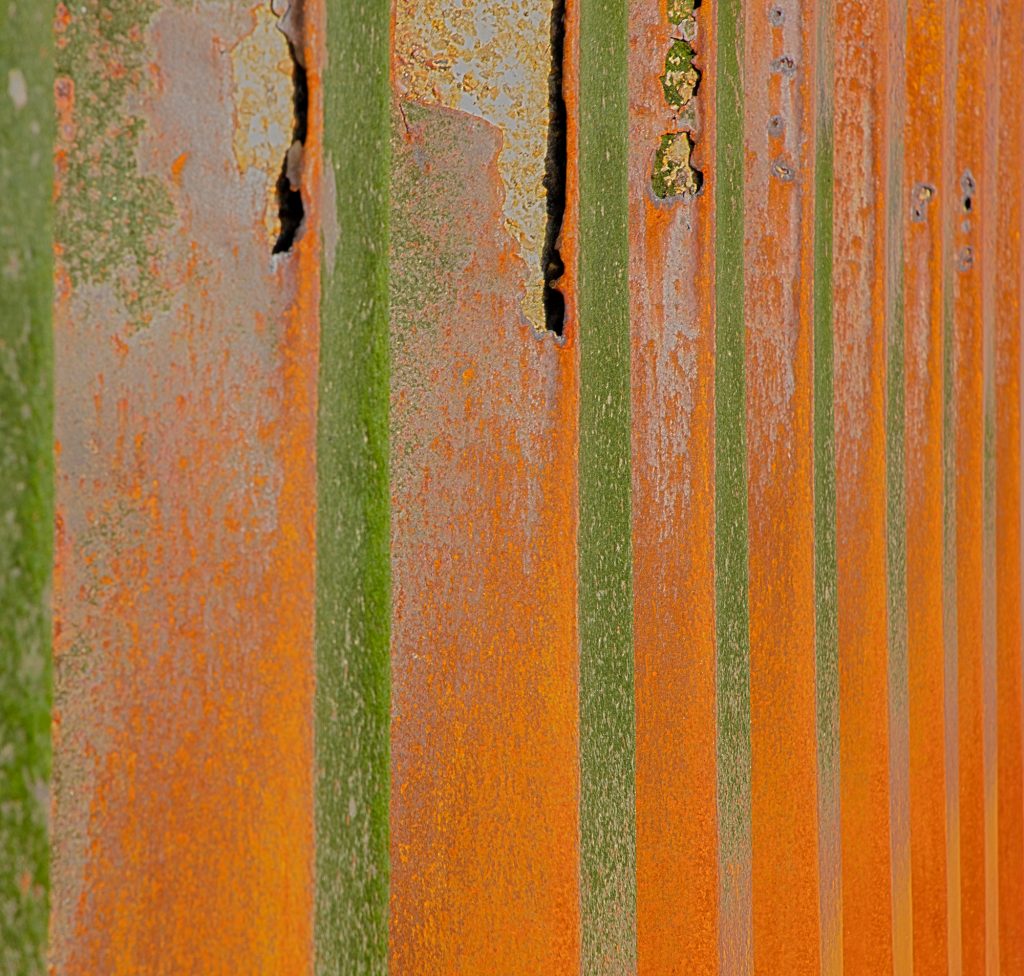