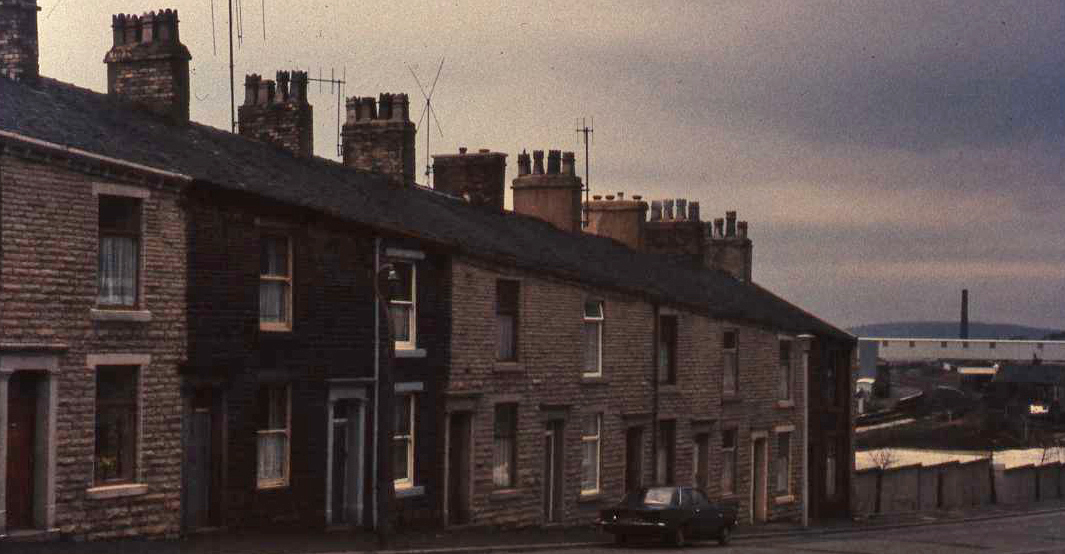 In the hotel world Mr. Hilton’s strictures that hotels profitability is all about ‘location, location, location’ is probably one of the most quoted. In the world of artists less attention is paid to where the artist is working, unless it obviously impacts their work.

I have visited Giverny to see Monet’s garden that gave rise to some to the most glorious early 20th century paintings. Stanley Spencer’s relationship with Cookham is well recognised, and there is recognition of the St.Ives school, but generally the work of contemporary artists is seen almost in glorious isolation. It is almost as if it is believed that artists occupy a reality separated from earthly bonds. Mind over matter perhaps? Given the struggle that earning enough to have a studio and buy paints occupies as a part of artistic existence this is about as likely as the proverbial snowball in the hot place. 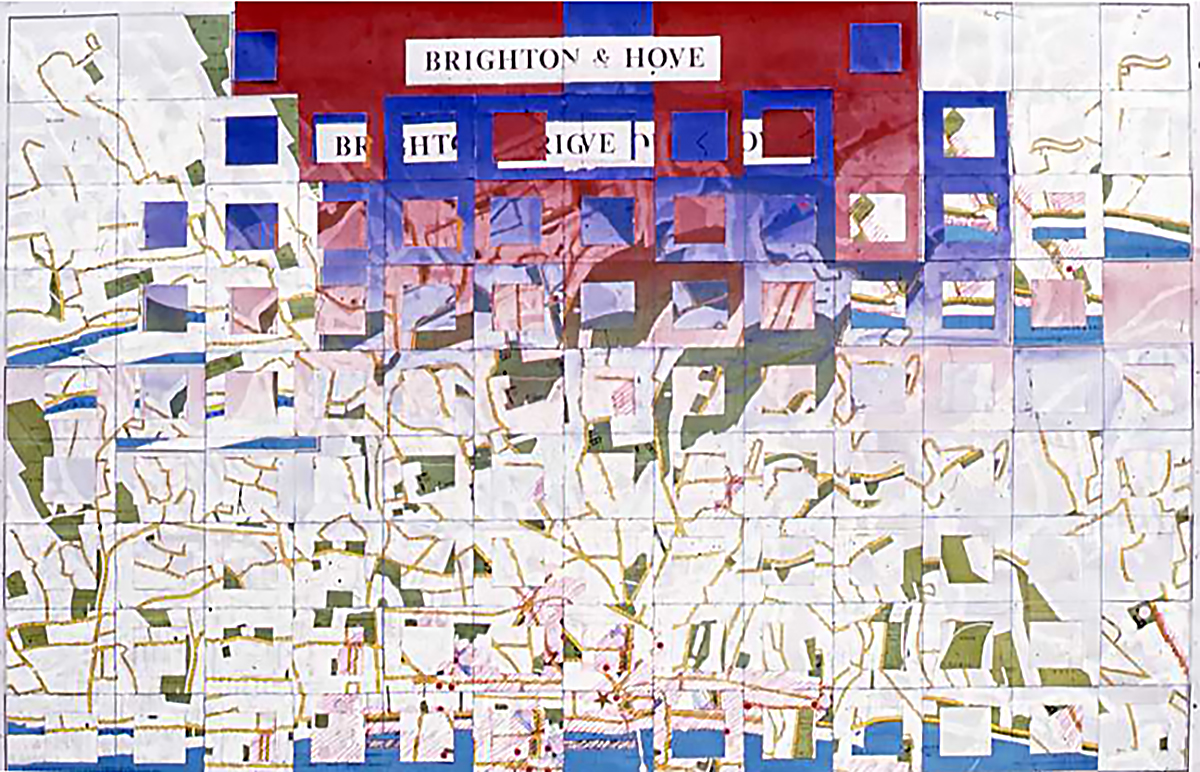 Memory map of Brighton. Acrylic, inks, gouache on maps collaged, A1 size.   Events are coded and then collaged, Playing with how we read images, art as language. Want your own memory map? I accept commissions….

In 1974 I saw that if I stayed in Brighton I would never escape from renting. My studio was in a squat and although I was showing it wasn’t the exhibiting that was important, but the ability to continue to do the work. I researched places throughout England looking for the cheapest place to buy a house. It helped that my then girlfriend was from Blackburn with Darwen so it (second cheapest after Sunderland) became the town of choice. These northern towns have been shrinking as successive governments allowed the UK to de-industrialise, the only country in Europe to put its faith in bankers instead of industry (and we know where that has taken us!). 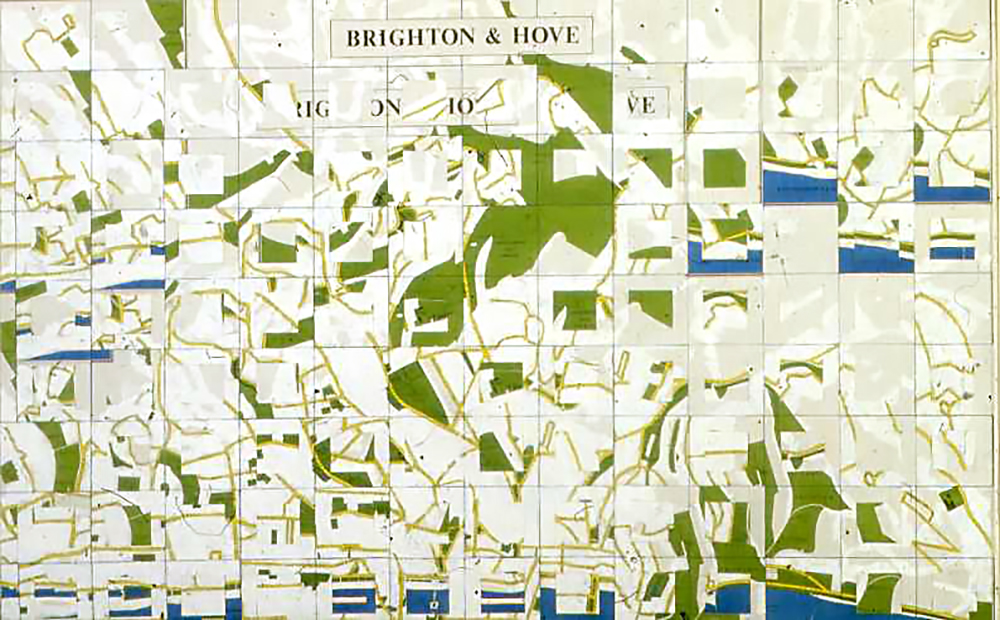 Memory map of Brighton – this one just about reading space

As Blackburn and Darwen shrank – Blackburn dropping from over 160,000 inhabitants when a thriving mill town in the 1880’s to today’s 107,000 – so housing emptied. In the 1970’s indeed the  Darwen part won an award for pulling down houses and planting trees instead as its once thriving coal field and cotton mills closed down. I bought a terraced house for £400. I had saved £200. I was paying £16 a week in rent for a flat in Brighton, so as my bank manager said in advancing a loan of the other £200, if it fell down after a year, I would be in profit. 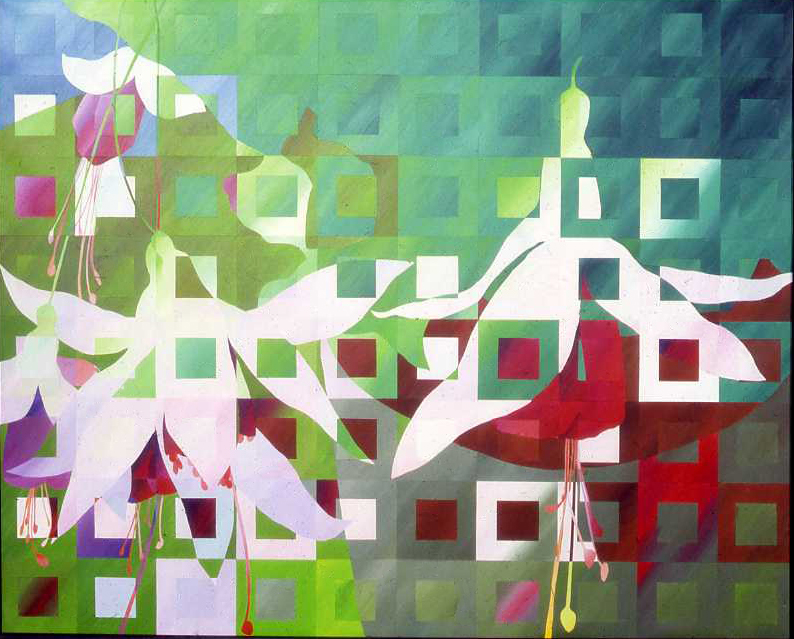 Fuschias – an exercise in whites. Acrylic on Canvas 5 feet by 4 feet

I moved north, and initially took a job as a dustman as the hours allowed me to work in the studio every afternoon. I also worked as a screen printer and was eventually asked to teach at the local college. Incidentally I believe the solvents used in screen cleaning all those years ago were a prime cause of my developing the cancer, cured only recently.

One of the two bedrooms became a studio, although the larger paintings were eventually to be realised working in the Foundation studio alongside students in the local art school. I took up flagstones in the back yard to create a garden and it became the source of inspiration for the paintings. The moors and the windswept landscape were exhilarating and also inspirational, and without rent or a mortgage to find I was even able to buy the occasional print to hang on the walls. The work flowed and I exhibited regularly. “Deep joys” as Mr Pastry* would say. 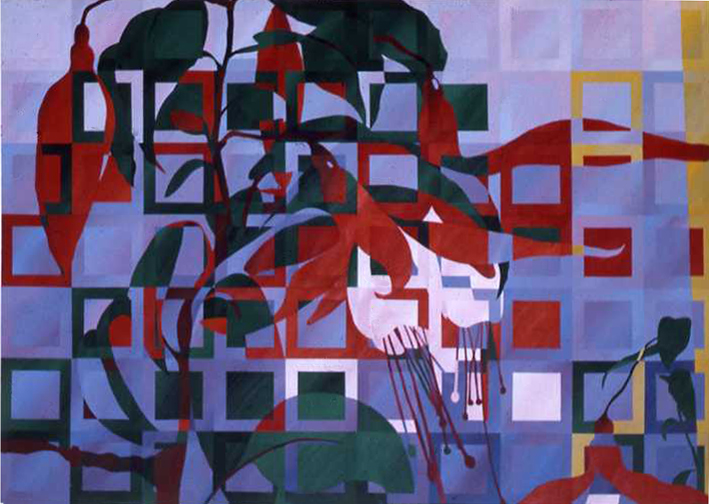 Painting done in Darwen – purchased by Hilton Hotels if memory serves me right. Fuschias 3’6″ by 5′ acrylic on canvas

In 1980 I was pushed into a move to London, following my partner’s decision on a career change. It didn’t fit my plans but I found a senior post in a London college. I lost my garden and my 3 shows a year. Not only that but I lost my horizons. Hemmed in by buildings and noise, in a stressful senior college situation, I gradually stopped painting other than sporadically. I didn’t miss the north but did miss the lifestyle I had enjoyed as a thriving artistic career had developed. Now it stalled.

As you can see, I don’t miss Darwen, although it was a great enabler, and I have fond memories of the folk and still something of the accent after living there for many years

I am once again living with an horizon, and here at the seaside there is no escaping the weather. I have to start to rebuild networks without really the first idea where to start although my first show has been a successful beginning point. I have a studio and some financial independence, although I no longer have youth and full health. Time is not on my side.

As I write this the importance of location to painters fascinates me as my location powerfully impacts my work and my thinking. I miss the oaks and woods of Surrey but now have Downland and coast to explore in their place – and the time to make those explorations at last.

It seems most of the modern tradition is about the intellectual not about an emotional relationship with subject matter or location. Indeed the linguistic justification for superficial work seems an important element of much of what passes for contemporary art practice. 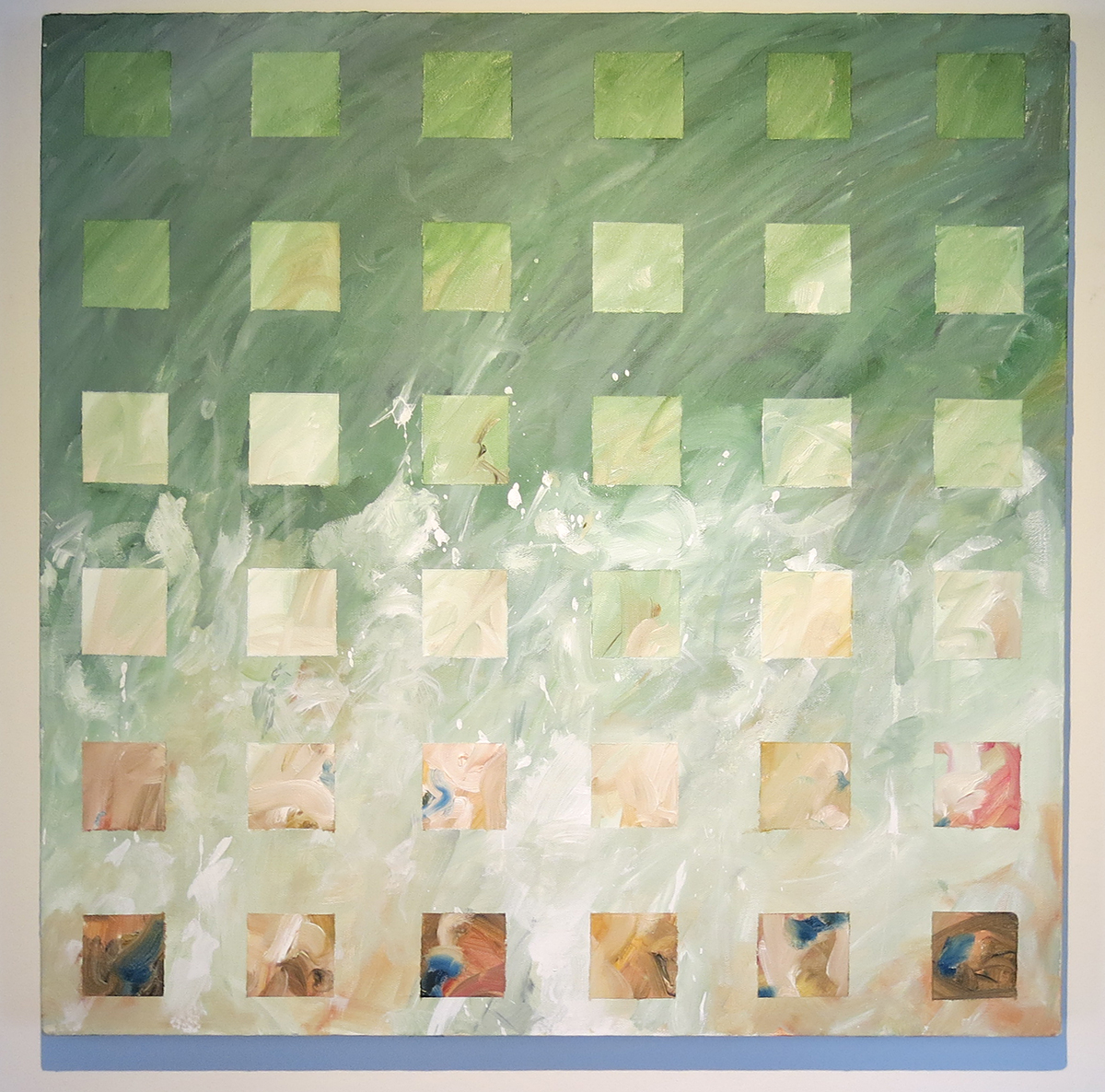 Recent painting (Wave 2014, oil and acrylic on canvas, 3feet square) uses the sea as source of inspiration, the starting point for the painting

This cannot be so for me, maybe because of the dislocation from place, the sense of being an outsider that was the result of a childhood in the transient world of service postings that an upbringing on RAF bases produced. I am still feeling my way into the sea and landscape of the Sussex coast. Some of the work is inevitably going to be backward looking, as my previous memory maps were when I initially moved north from Brighton, but as with Darwen my own garden is becoming a serious source of inspiration. Where I am, physically and mentally, matters in the work I do.

Most of all the presence of huge skies and landscape is re-energising my ‘muse’ and the work is beginning to flow again. After all, to paint is to love again.

*Mr Pastry was a children’s entertainer from my childhood

(Incidentally I bought my house in Seaford off the Baroness of Darwen, How is that for social mobility? The dustman from Darwen buying the Baronesses’ house…) 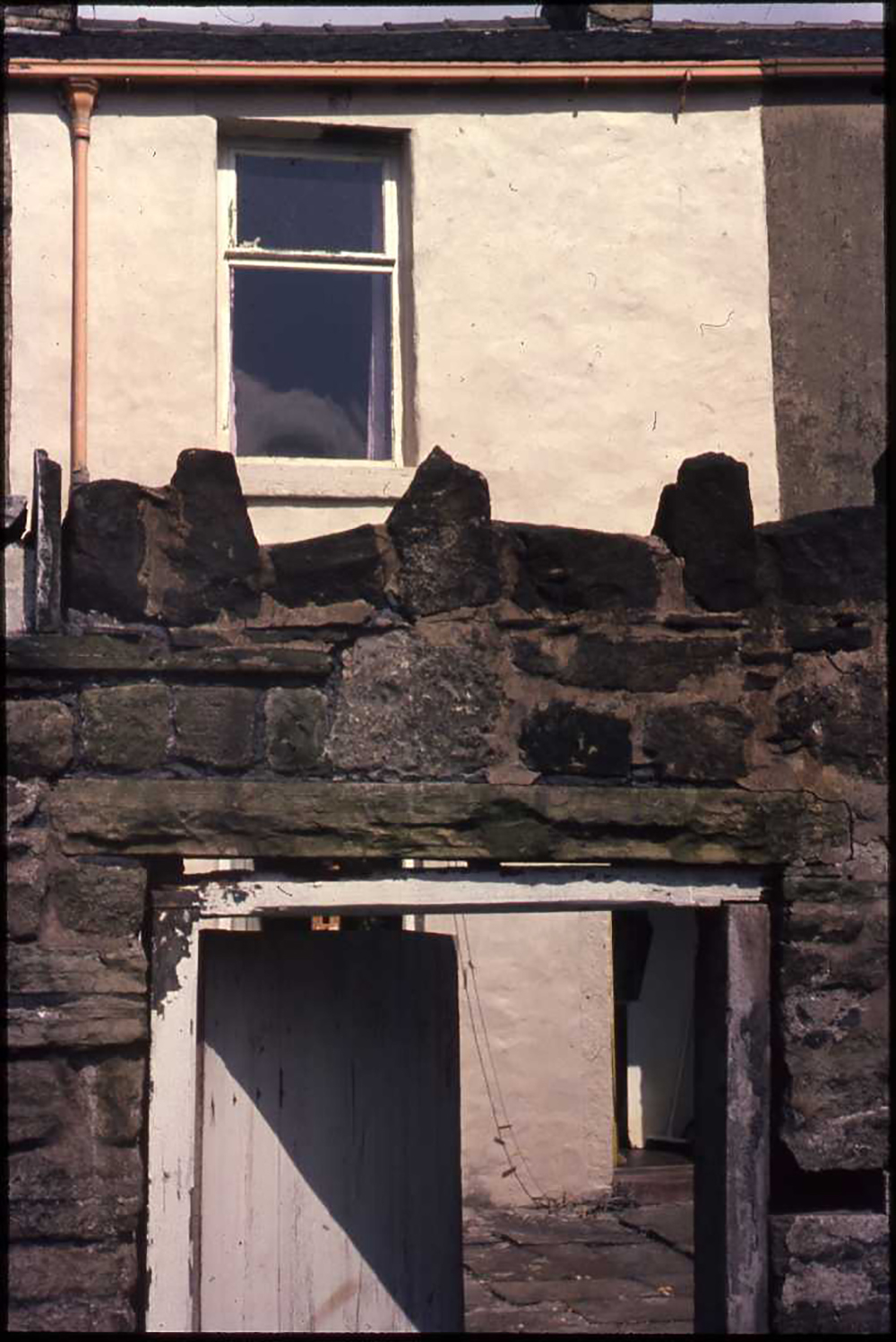