What do you paint? 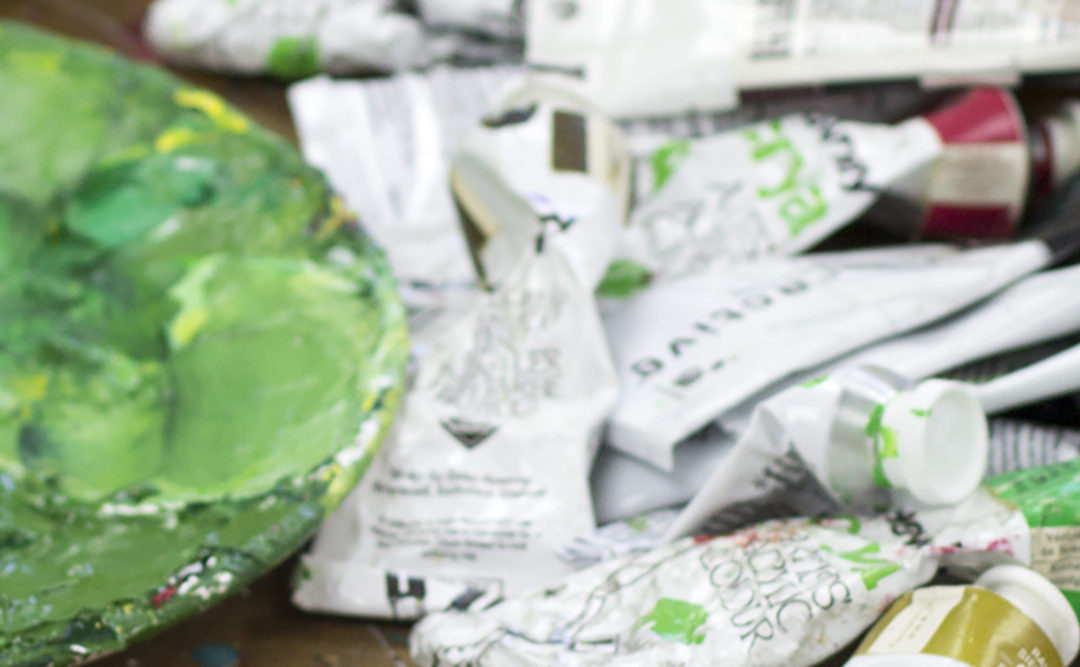 Classic question, isn’t it? Everyone’s response when you say you paint, occasionally bitten off halfway through when the questioner realises the foolishness of asking.  “I do flower paintings” is my standard riposte to this question. An answer as misleading as the question is unanswerable verbally. How to describe in succinct words my use of colour and imagery when, as the editor of the London ‘Times’ Newspaper now says, one picture is worth two thousand words?

Even with my imagery most people don’t ‘speaka da lingo’ as understanding of the language of art has shrunk with the derivative trivialities of many star ‘painters’ of today, so whilst the eye may delight, meaning may elude them. The few, like Hockney, who use and understand the language of colour and line appear to be a shrinking number. The number of people with the patience to stand and interpret a painting in an act of contemplation is even smaller. Maybe I’m just too ‘old school’ but I believe that painting is a language and like the masters of the Renaissance or Impressionism, carries a message for those willing to interpret it, as well as looking luscious in the eye. But like reading it takes a mind willing to enjoy the language and enter an alternate reality to gain a fuller understanding of the imagery. Each must find a writer that fills their soul with more than mindless chatter too.

Not that I am comparing myself to an old master anywhere else – I just mangle the language to present my own version of truth. Everybody has a different truth too – each to their own. The flower part is just a starting point, a way in to the painting for the untrained eye, almost like a keyword initialising the understanding of the language of the painting. 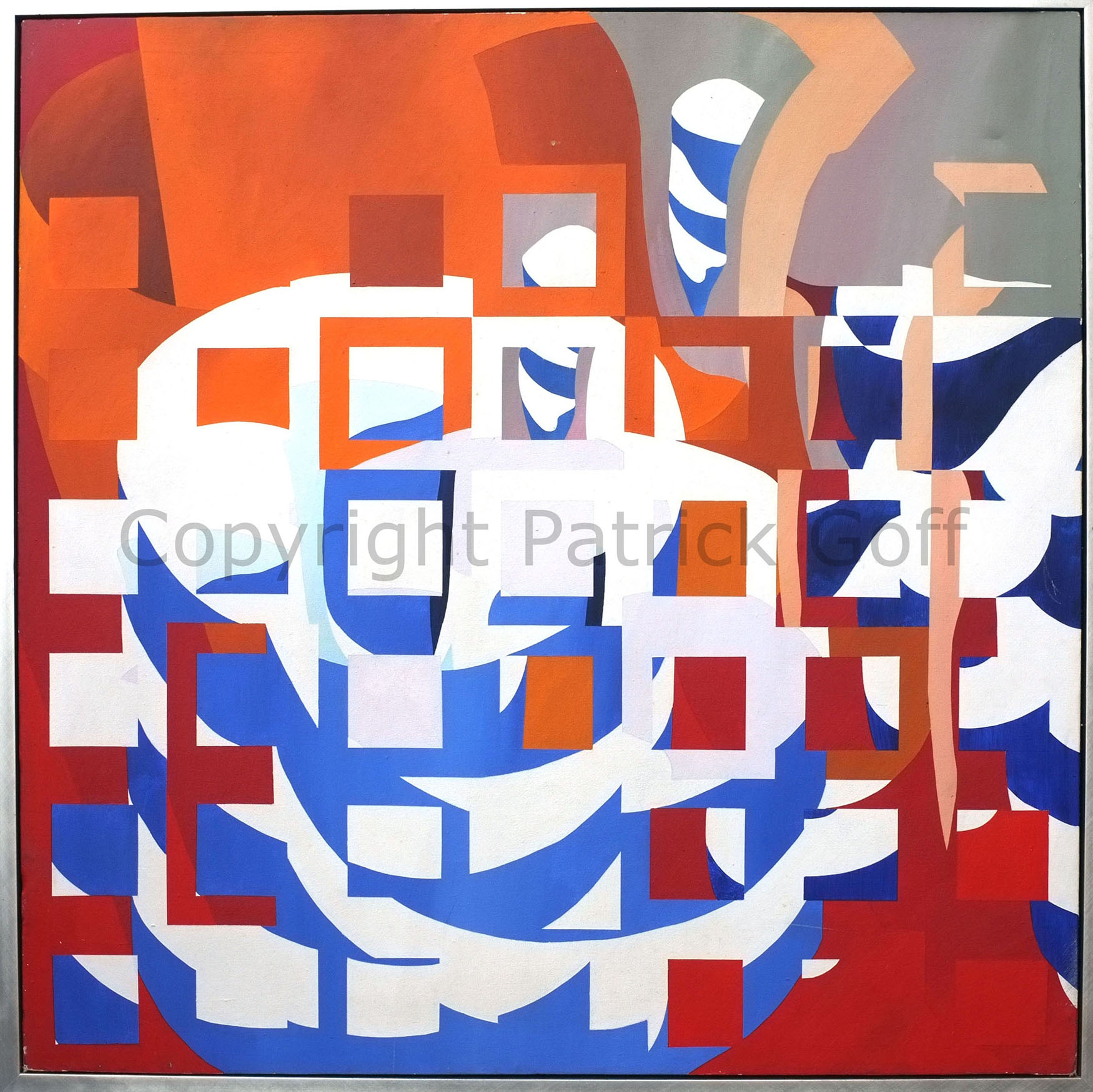 Tea for Two. Still life in a private collection in London, England.

I usually use photography and drawing as my starting point. I work with traditional definitions and methods. Line is defined as the movement of a point (in this instance pencil point) through space. Line represents edge, as in the edge of a surface. The position of that surface in space being described by colour and tone. Those surfaces in turn change their position in space to make solid, or for a painter the facsimile of solid, shapes and surface. Colour manipulates and can contradict what line says, so beginning the game, the puzzle of the canvas… Windflower is now part of a private collection in Tucson Arizona

In enlarging my initial currently flower image to work on a larger canvas, I use the traditional artists grid to square it up for transfer to canvas. It is not always flowers – sometimes a still life, a landscape, even something read in another visual language, like a map, can also serve as a starting point (Tom Philips, for example uses a page from a Victorian erotic novel as his starting point in his pages from the Humament). The scale of my canvas is determined by the scale of the brush stroke I use. I like mine to reflect a physical involvement with the paint and surface so they tend to be worked around a grid based on a six-inch square, this being the smallest size if have found that allows the physical involvement with the brushstroke. 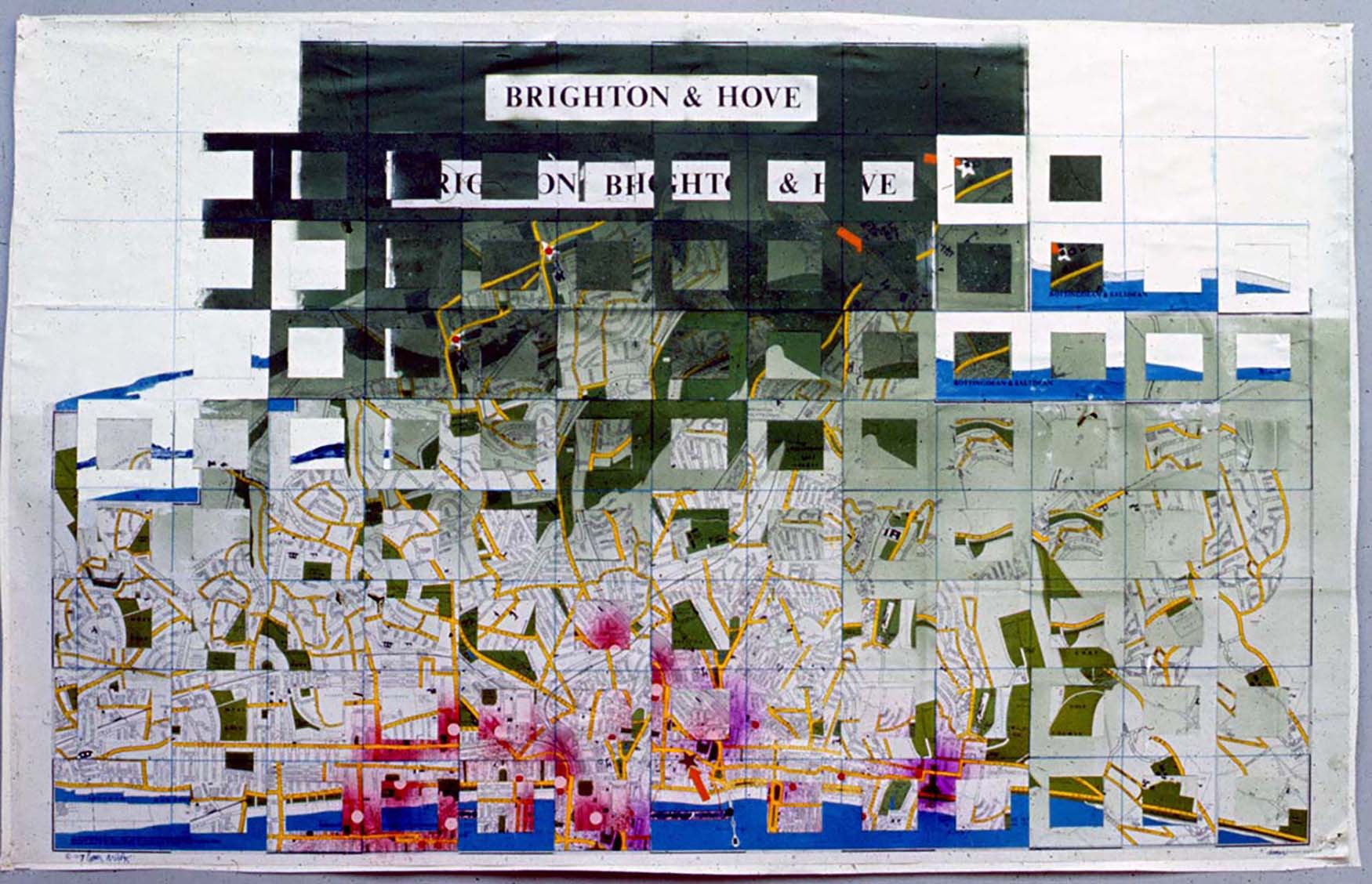 Brighton and Hove Memories. Maps are already built around grids, and are familiarly read and interpreted. Here the dislocation means road disappear under? Colour gains meanings…

Other artists have used and kept the grid as a part of their imagery, perhaps and certainly for me, the most influential being David Bomberg with ‘In the Hold’. The puzzle here is to find the stylized men unloading sacks from the hold. The use of the grid to dislocate colour and create the puzzle is strong and it is not surprising that painting like this led directly to the dazzle camouflage of first world war vessels. 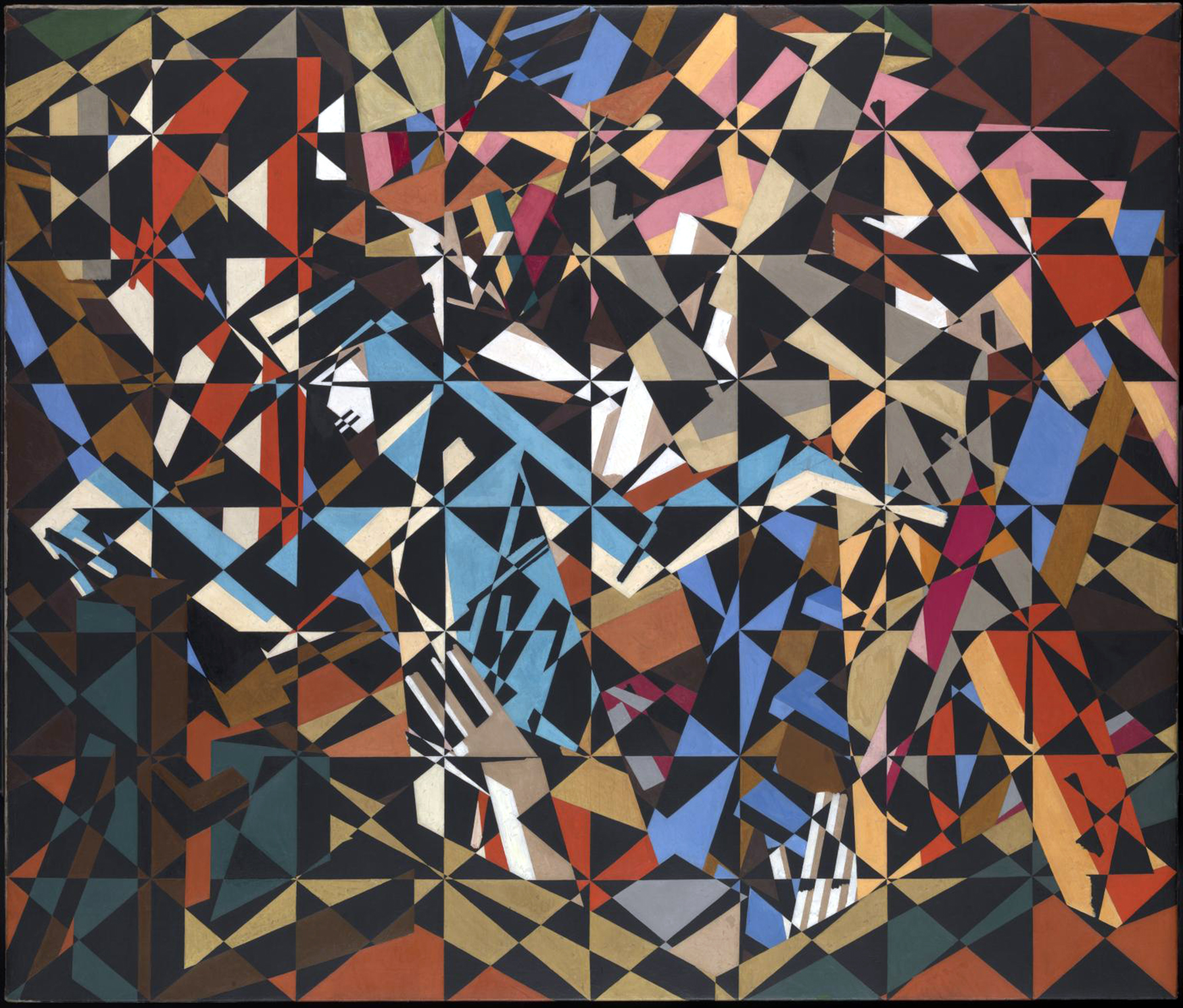 I use images that are familiar to ease the viewer in to the picture. Not surprisingly the flower is often seen quickly by children with their innocent untutored eyes, whereas with adults the conditioning, and lack of visual training, most have leave them unable to decipher the image, the games I play with space and colour leaving them to react at a visceral emotive level to the colour, for colour is emotion too.

I aim to move the feelings as well as the intellect. At one level this is achieved through the emotional subjective response to the colour alone, its patterning, contrasts and sharpness playing with the emotions of the viewer. The surfaces are faceted, gem like and precious enhancing the decorative effects, and I hope moving the viewer. However, the dislocation of the colour from its origins in the image also carries a message, with the grid acting as a representation of rules. 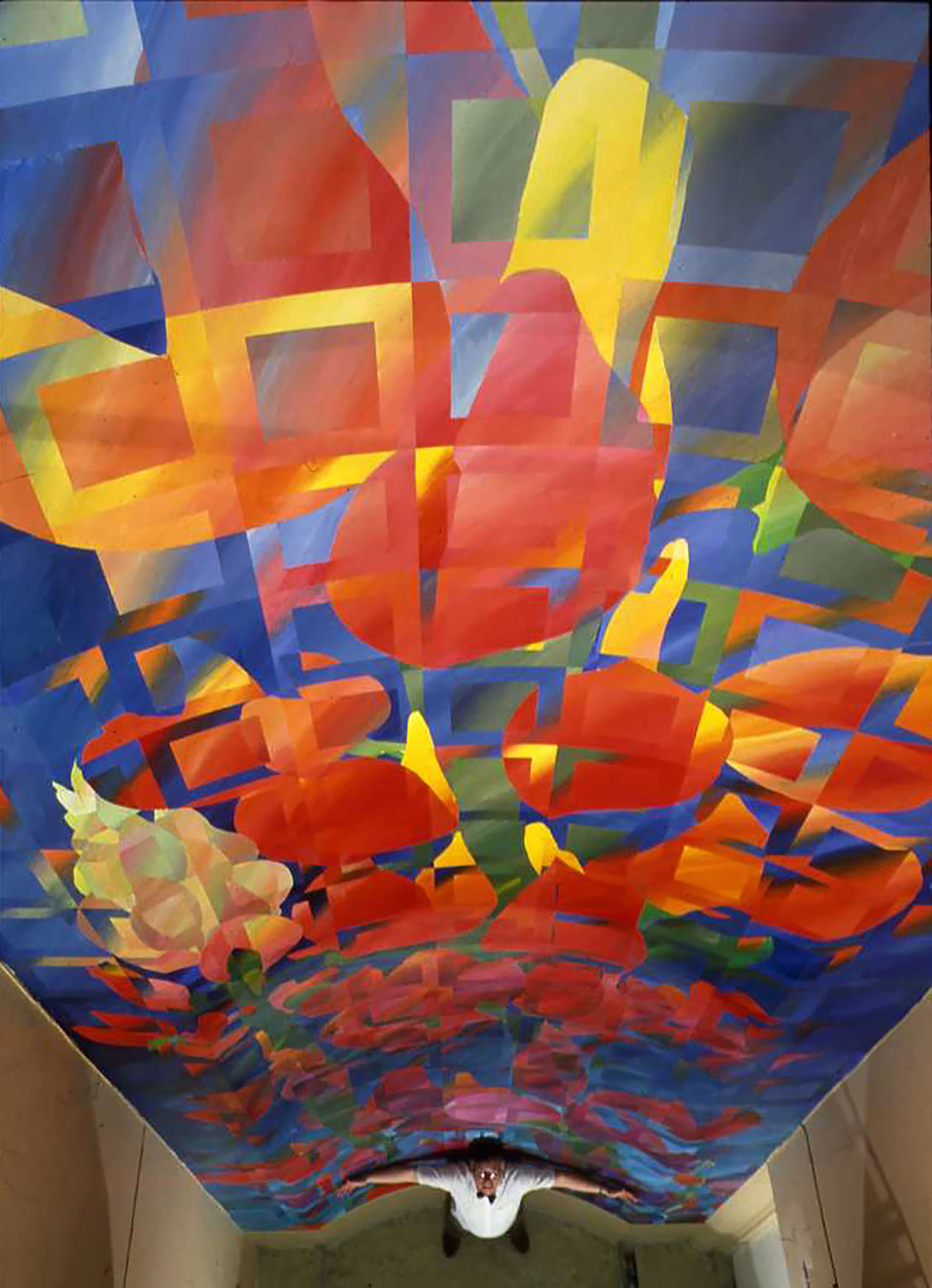 ‘Tree of Life’ approximately 12′ x 30′, one of the Morley College murals

We all live with a grid of rules – social conventions, laws etc. which govern how we as individuals are allowed or encouraged to behave within our communities.  These rules can result in distortions of lives, changing how we would choose to live to match what the social rules allow. So, for example, we generally don’t walk around naked, although some challenge by doing so – in East Germany under communism, naturism was a defiant gesture of disobedience to the state. Social rebels ignore the rules, bend the rules to suit themselves. In my way, I am trying to show  in my decorative disruptive surfaces an analogous representation of rebellion. 3′ x 3′ acrylic on canvas. The first of the Honeysuckle series is now in a private collection in Memphis Tennessee, USA

I hope this piece persuades you to look, not listen, to use eyes not ears, to surrender to enjoyment. The game is a pleasure to play, as I paint therefore I am, but hopefully the results are a pleasure to see as well. As one viewer said to me recently “your paintings make my heart sing”. Goal achieved…