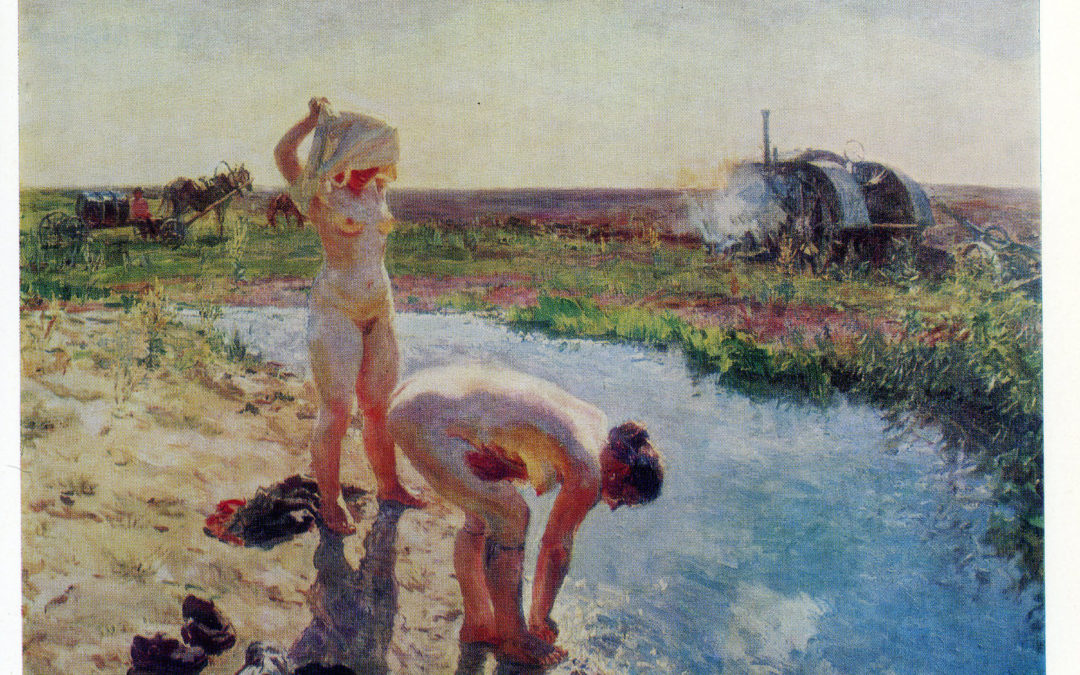 Since the research was published in 2003 the availability of the World Wide Web has turned broadcasting on its head. As a publisher of an online magazine I watched the growth of statistics of all types related to the Web, and in the period this research paper was written assisted some graduate researchers in their work, whilst extensively researching myself. (I started the online magazine in 1998 and ran it until 2017 – it continues today under new ownership)

Meanwhile ‘normal’ commerce including supermarkets and gambling have grown enormously. In 2002 on-line sales at Christmas totalled just 2% of all sales, whilst retail gazette reported in January 2022 that online sales excluding groceries had risen to 80% of total sales in the UK, and Royal mail says that online shopping continues to grow.

If we go back 100 years then changes were also happening to many in frightening ways as new media and social constructs then were affecting social behaviour, effects that continue to echo to today. Accelerated by a world war, technologies were changing first for the rich but then for all. Aviation developed with the first international air services. London was served from Croydon Airport and it is said the London to Paris route was the first international route, and that the aircraft were so slow that if they flew in to a headwind leaving Croydon often the only way they could overtake buses to Brighton was when the bus stopped to pick up passengers…

Interestingly a survey found that the city centre to city centre travel time between London and Paris had hardly changed because the growth in traffic and passenger numbers had caused increased travel time getting to the airports and a huge increase on progressing into the aircraft, even though flight times had shrunk enormously as speed and reliability of aircraft changed.

In the arts the beginning of the 20th century saw the opening of an era of visual research led by schools like the Bauhaus – see The Bauhaus and Me  and linked articles on my site. Alongside this the work of Jung and Sigmund Freud opened research into the way the mind works including research into the Psychology of Art by people like Rudolph Arnheim whose paper comparing moustaches led to him having to flee the country. The country was German, year 1933, and the comparison how the moustaches changed the face, comparing the comedic face of Charlie Chaplin with a local politician called Adolf Hitler. Even writing about visual world then could be life threatening, a bit like those people who threatened the author of Harry Potter, J. K. Rowling, for making her own views known in an online debate on sex. Much of art was being shaken not just by digesting the Impressionist/Post-impressionist movement or the Futurists but by the agitprop trains or R. Mutts urinal.

The world is in a permanent flux as technologies change the way we live and work, communicate, and manage our interpersonal relationships. The loss of innocence has accelerated generation by generation, but the increased availability of information and knowledge has generally led to people living in ‘silos’. What do I mean by this? Let me illustrate.

A previous generation generally lived in smaller communities (England has grown from 40 million in 1946 to nearly 70 million today (no one is sure of the total). Many of those communities were small and immobile where family groups formed their own support networks. They lived in broadly linked communities. Times have changed and traffic is so busy we often don’t know the people across the road, separated by streams of traffic. Relationships with shops and professionals were local, often social as well as professional. Nowadays our shopping is mostly in a supermarket or online, our car is serviced by a large dealership somewhere and our medical needs are not a friendly local doctor who has known us for years but an often-foreign accented voice on the end of a telephone. We live in electronic isolation, in silos of our own making.

The man who services our car will be like a hospital consultant – a specialist using computer diagnostic. He works to a check list, as the medics do, and rarely steps outside his area of specialist knowledge. So you can take your car out after service and find the bonnet flies up on the motorway because bonnet latch was not on the computer checklist, and you died in the resulting accident. Similarly a cardiac consultant can check you out after you complain of chest pains then dismiss you saying, ‘it is neurological’ and therefore not his concern where many years ago a doctor would have kept trying you find out what was wrong rather than just rushing off to the next fascinating specialist specimen to examine, leaving you to have multiple ‘events’ leading to death. 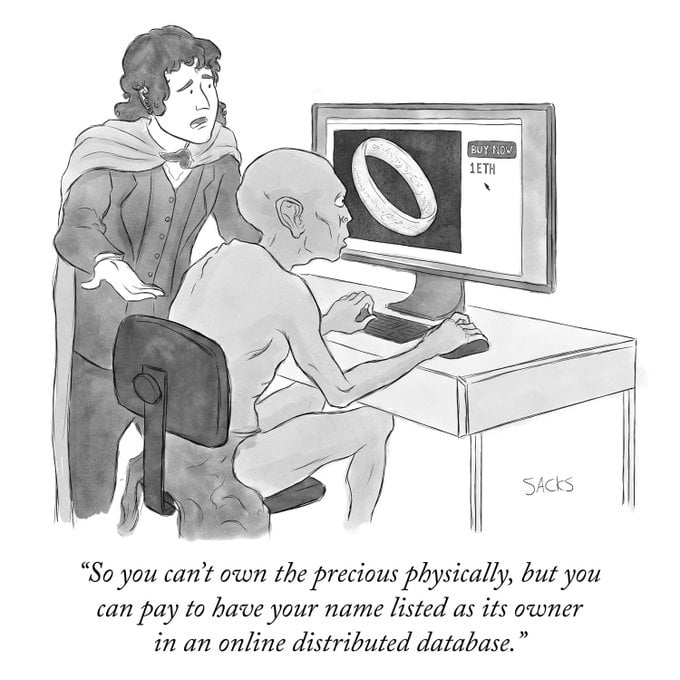 A definition of an NFT (non fungible transfer)

So the spread and depth of knowledge has had a dehumanising effect on many professionals. Is it so in the arts? The growth of NFT’s and the sale of artworks through the web is beginning to do this I believe. Art may be seen as an investment and for the rich prepared to put up $100,000 you can join in a group bidding millions in auctions so you own a share of, say a Monet. This is not art you have on your wall, but a variation of gambling on the stock market. Similarly with NFT’s you are not buying a physical piece to gaze out in wonder and enjoyment, to catch out of the corner of your eye as you descend your stairs, but a file kept on an electronic server somewhere in your name.

My hero is Monet. I don’t have his garden, but I do share his obsessiveness to explore and share the beauty of what we see. My current obsession is with one area locally, the rust and decay of sea defences of the Cuckmere and the Seaford Splash Point ironwork. When I visited the installation in the Orangery I sat on the end of the sofa, my entire vison filled with his curving painting on the end wall, and its beauty moved me to tears. Ever since that has been my dream – to fill a space with paintings that by their beauty, colour etc. move and audience emotionally. 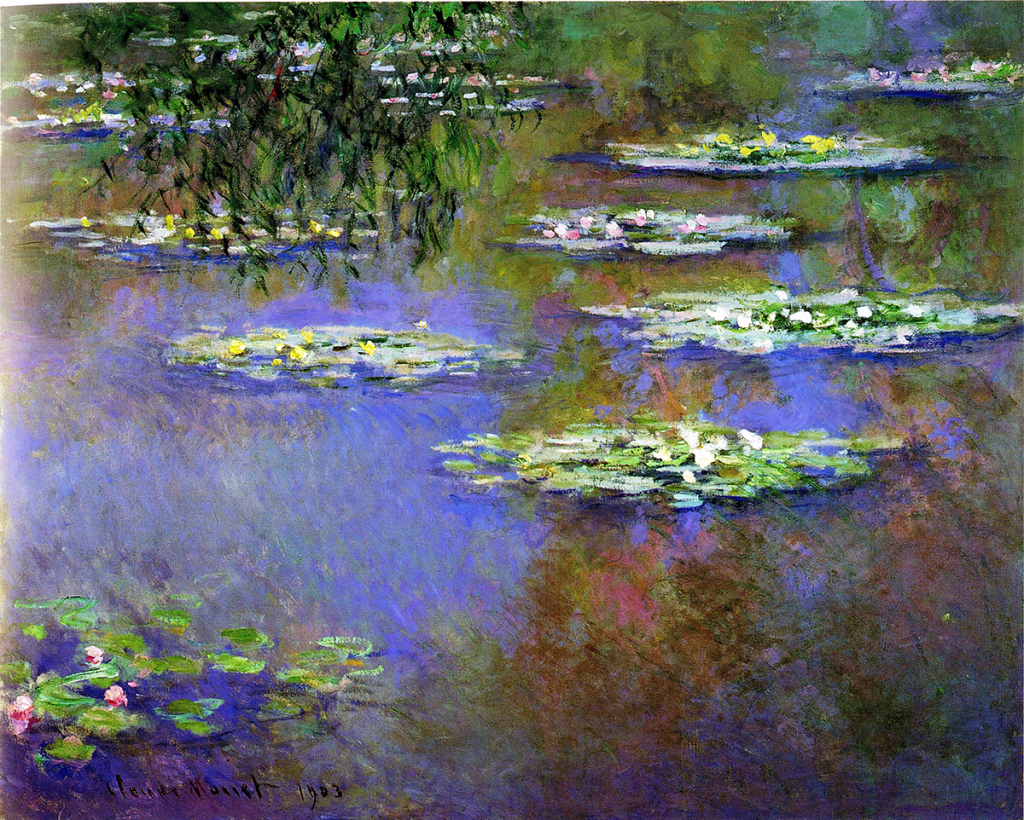 Many artists have done this. American Hopper evoked the loneliness of the city for example. Tom Phillips evoked childhood with his paintings such as the painting with the teachers copy of the Turner’s ‘Fighting Temeraire’ chalked on a blackboard. What we all have in common is the belief that artwork should emotionally and visually link to the viewer. In Turner and Monet scale matters as the paintings are large enough to physically dominate a viewer. Durer sucks you in to his work by making them tiny, precious, pulling you close to view them. These are artists who pull you back again and again to their work, giving new experiences every time. 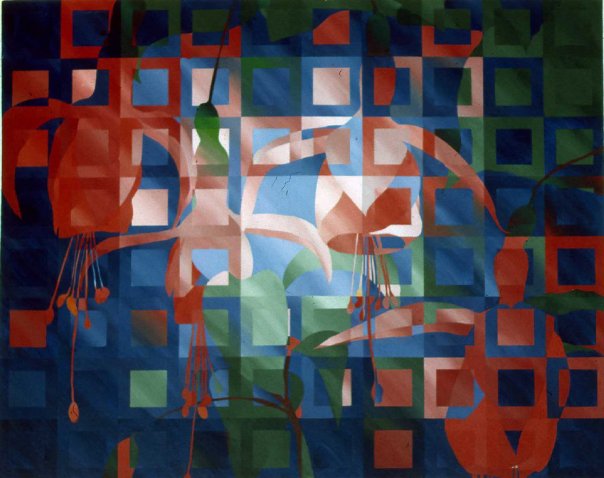 I doubt I will ever achieve my dream of filling a space with paintings that move an audience. The closest I have come was with my exhibition in Salford’s Lowry Gallery where a junior school teacher brought a class of children who became excited as they recognised the flowers in the paintings. Their pleasure was my pleasure. I hope I give that pleasure when I pack the walls of my studio for ArtWave.  I look forward to welcoming you whenever they decide dates for the show again, probably in September. Until then go sit in front of a painting somewhere, and just enjoy, away from a flickering screen. Don’t be afraid to buy something large, it will always be better than looking at wallpaper, and talk to your neighbours….