I have this noted as Cliff Walk 27 but late summer ones were called Beach Walks in the notes, and not all were numbered, but this is the 27th where I have stopped to take pix on the camera. These walks feed my physical and mental well-being, feed my soul, and are a small part of my getting back to normality. Yesterday for example was not a day to take a camera along the shore as I have an aversion to getting an expensive digital camera wet as I have discovered that electricity and water don’t easily mix. Yesterday the weather could be called ‘stimulating’ even on our soft South-East coast. 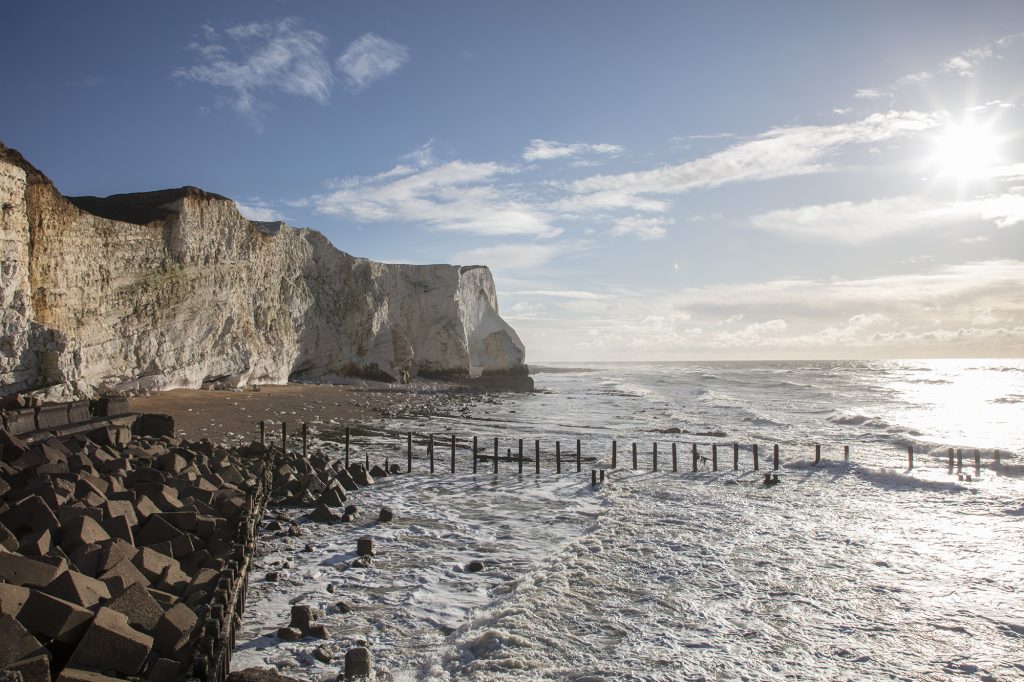 Yesterday the wind howled across the waves. Spume blew across the shingle and was carried through the air like partially deflated party balloons. Wind driven spray broke hard against the cliffs sending a fine mist of saltwater high into the air. Salt obscured my glasses as raindrops rattled on my hood like buckshot. A hoodie, at my age you might think, but I was grateful for its protection and the fur hat that protected my ears from the savage wind chill. I leaned into the wind as it tried to push me sideways, losing the battle to stay on my chosen line, crabbing down the path. 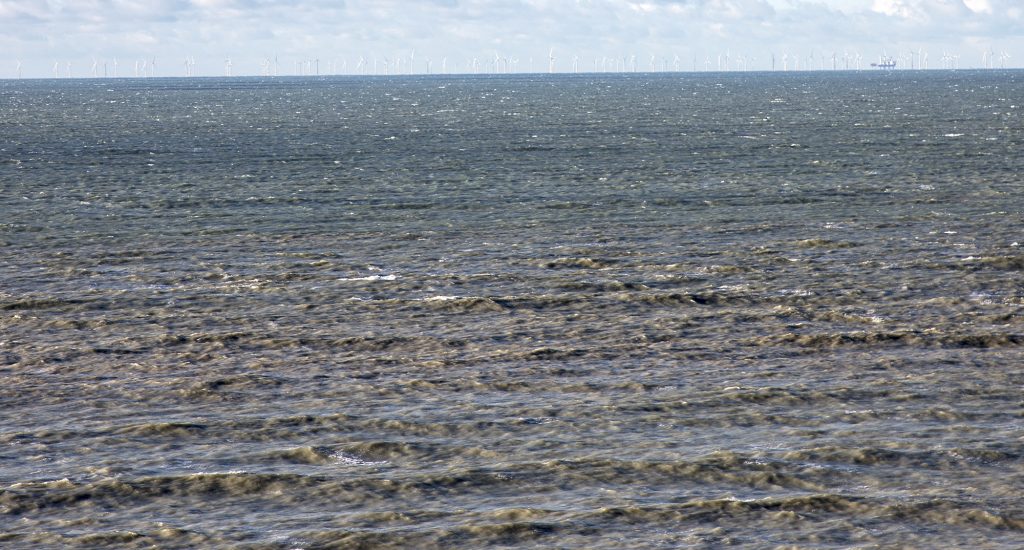 A coach disgorged a teacher and a class of teenage kids. Some immediately put their backs into the wind tilting at 30 degrees as they saw how far it would support them as they leant against it, staggering as it gusted and dropped momentarily, shrieking with glee. Many were underdressed and (as youth often does) testing their invulnerability to weather and discovering it was limited. Without proper coats they were reduced to trying to use quickly soaked clipboards of classroom notes as windshields, some crying out from the sting of wind-driven raindrops on exposed skin. Their teacher took phone snaps of them to gloat over later.

Today was calmer, but as I left the house the garden thermometer read just 5 degrees. At first, well wrapped as I was and partially being blinded by the low sun, I thought I may have overdressed, but as I clamber the path out of town towards the clifftops I meet with the wind. On the lee of the cliffs it was breezy but as I walked higher, and the wind whipped over the clifftops, it became cruelly cold. Tears ran freely behind my specs, and I even wondered briefly if they might freeze but it wasn’t really that cold, just felt it.

On calmer days there are scents to enjoy as I walk, even in winter. Maybe starting near the house with the smell of wet earth or leaves, and as I follow my path towards the cliffs I pick up the smell of a coal fire in one spot, wood smoke from a log-burner in another. By a large corner house, the smell of air from a tumble dryer, occasionally the smell of a damp dog as I pass a dog walker, making me smile with remembrance of the smell of outside that shrouds the cat as It bangs in through its cat flap. Todays the wind blast numbs my sense of smell. 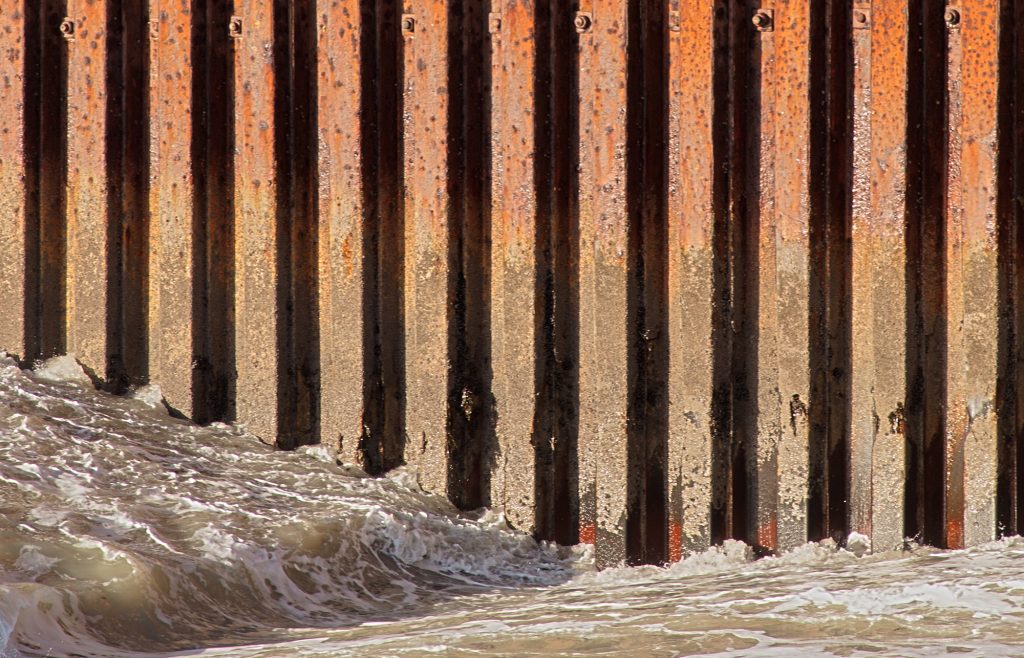 Even the golfers were sparse as the cold kept people inside. No walkers on the cliff paths, quite a contrast to the steady flow in the summer months. The cold of early morning was dissipating leaving blue skies, the sea a great deal calmer than yesterday. But it was so cold on the tops. I took my usual route pausing briefly to see if the flock of oyster catchers were on their beach but no, even they were tucked away somewhere warmer than the exposed coast. The air was crystal clear. The white of the wind turbines clear on the horizon, the coast way beyond Worthing clearly visible, the spike of Brighton’s i-soar just a pencil line against the townscape.

As I descended the slope the wind seemed to whip around the cliff even harder. The beach today was empty with the occasional idiot sitting in their car to watch the sea, engine running to keep their heater going regardless of the pollutants they were pumping out (should be 3-point penalty on their driving licence). I turn and heard to the undercliff walk to look at the breakers. Yesterday I started working on the series on time, expending on the 4 Seasons prints, using both my daily weather pictures, always taken from the same place, and looking to extend the wave series too, with today’s images adding to the resource I am going to use.

As usual ideas are firing off madly in all directions including looking at the ‘Bridget Riley of the Shingle’ series again, and I amused that today the Riley seems to have collected a gnome. 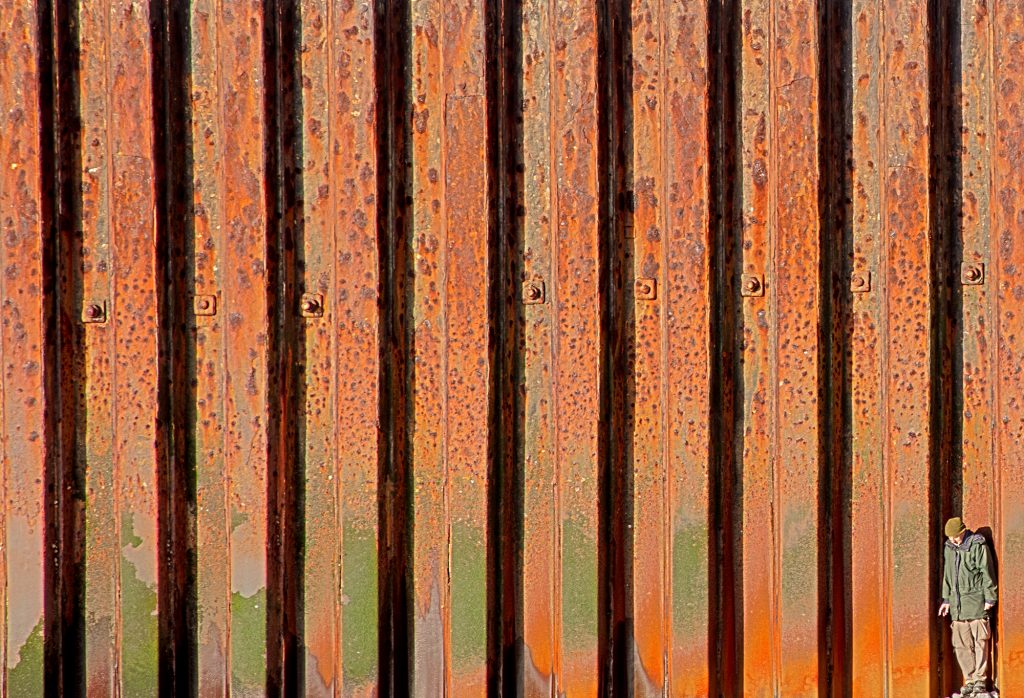 The 4 Seasons buckets were randomly taken images modified by drawing, then rephotographed and then touched up further in Photoshop, but the garden series is slightly more complicated, and whilst I have printed some of the images out the working method is not yet clear in my mind, whereas the Waves are much more defined, so I snap off another twenty of thirty images to work with – so much more viable with digital than the combination of film and sketch book I’d have used 30 years ago.

The strength of yesterday’s small blow is shown by the tangle of metal by the side of the ‘pier’, where the metal piling that encloses its concrete core has been torn free by the combination of storm driven wave and shingle. The waves are lower than yesterday, even though yesterdays were flattened by the strong winds, but still four-foot-high as they break on the beach. The smell of ozone and sea is enervating, and I just stand and watch, the foaming water stopping just short of my boots. 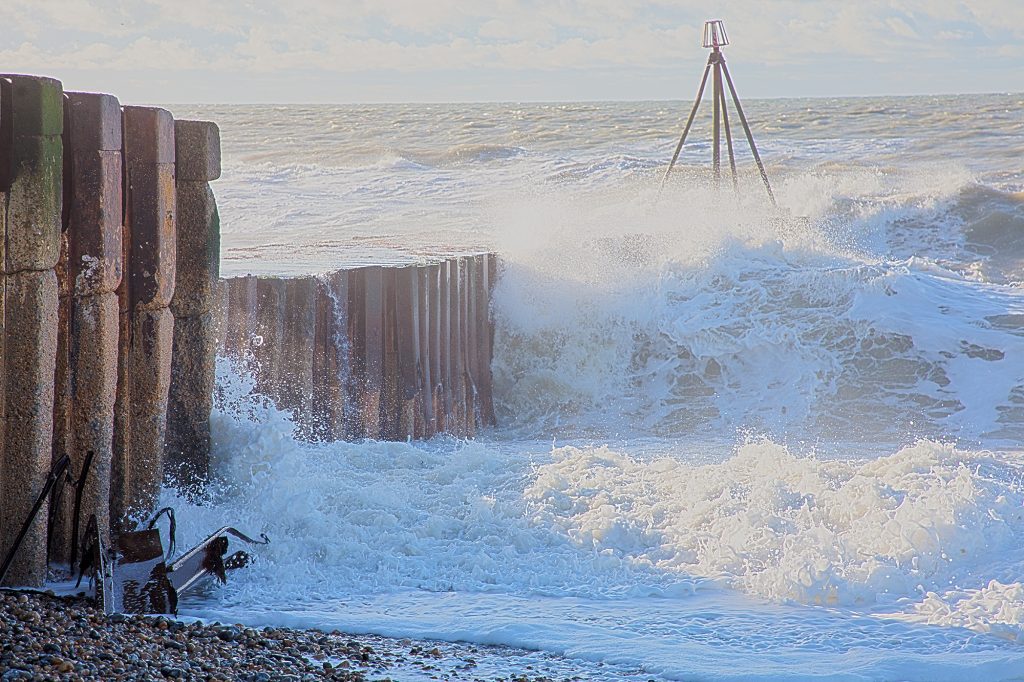 I walk back through town, knowing it will put near 8,000 steps, 3.8 miles on my tally for the day. Of course, today I have forgotten to strap the electronics on my wrist, but whilst the distance adds to my recovery (an article yesterday suggested that walking every day increases your chances of staying out off hospital by 20%) I am now walking purely for the pleasure, a pleasure multiplied by knowing each walk aids recovery. Cancer, ha! I spit on you.

It is glorious living at the English seaside in Winter.

You can sign up on the right to receive email notification of these essays – they appear roughly every ten days or so. The most popular have had well over 50,000 reads now