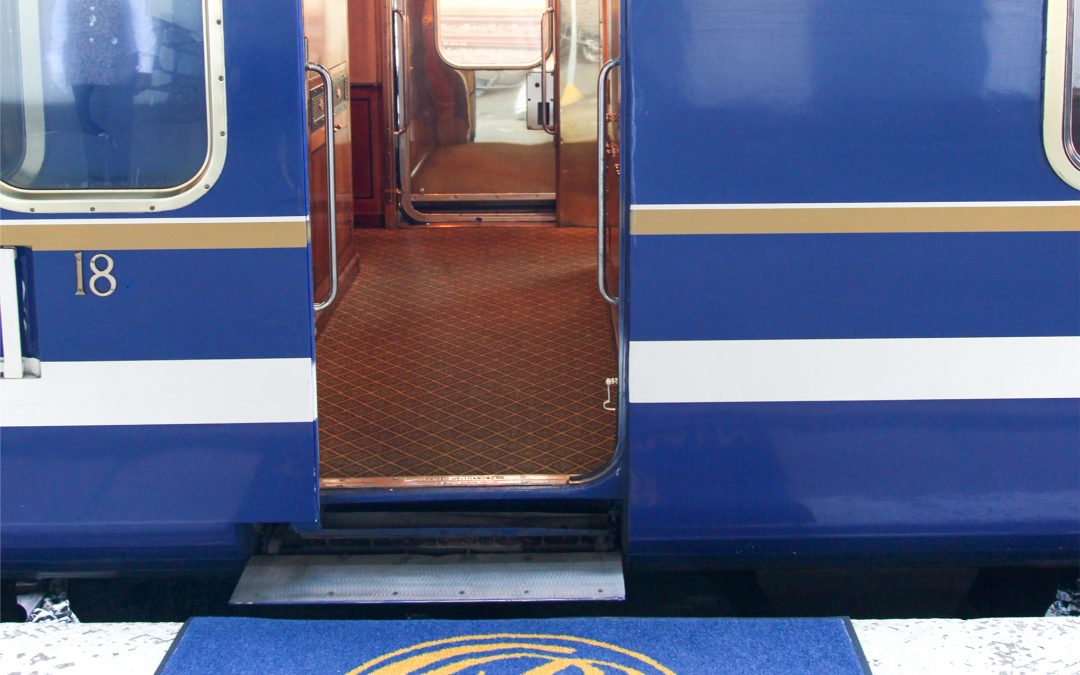 My piece on the Bluebell Line evoked not only a past era but also a slew of responses about luxury and trains, especially given the current furore around the competence or otherwise of those running Britain’s railways. Along the coast of Southern England where I now live, a luxury train is any that turns up, even if they have no toilet nor any heating! The carriages of the Bluebell Line evoked an era where not only did trains turn up, in a cloud of steam, smoke and smuts, but also when it was possible to travel in a degree of luxury only to be enjoyed in an airliner these days.

Last time I rode a luxury train it was the Orient Express, steam pulled from London to Kidderminster, and not by the blue of Mallard or Sir Nigel Gresley either. When planned by a now defunct carpet company it was intended to be a celebration for their designer specifiers of some economic golden years for the industry, but the Lawson induced crash (why does the BBC continue put this buffoon on as a ‘financial guru’?) turned it into a wake – grown men crying as they realised the Tory party had bankrupted them in the search for parity with the new Euro, much as many grown men cried as they realised bankers had shafted them in the 2008 banking crash. The decision to take the African equivalent of the Orient Express was one haunted by my 1992 ghosts, but the Blue Train proved an effective exorcist.

Typical landscape with Springbok, laughingly referred to as ‘fast food’ because of their speed, and flavour

The train runs a regular service between Pretoria and Cape Town, timetabled as 27 hours. As much of the line is single track delays are almost inevitable as we waited in loops for mile long freight trains full of South African coal to trundle past on the sections of track where this was possible. The train describes itself as a window into the soul of Africa, and it does a pretty good job of giving a privileged window into South Africa as it travels the 1000 miles through informal settlements, townships, small towns and farming communities, through a wide variety of land and townscapes.

Gautrain on the left, Metro on the right. Rush hour pretty much the same as London but not as crowded…

We flew into Jo’burg, and overnighted in in Tshwane, the administrative capital of South Africa that used to be better known as the capital of Afrikanerdom under the name Pretoria, from where our ride started. Surprisingly the Voortrekker monument to the racist Dutch pioneers still stands high on its dominating hill above the city. Almost a suburb of Johannesburg now, Tshwane is a busy city dominated by the civil servants that run government and the Blue Train starts its journey in the main station, still labelled Pretoria, amongst the busy commuter trains, including the new high speed ‘Gautrain’, standard Metro trains and dedicated Metro Business expresses.

Standing on its own dedicated platform the Blue Train waits the passengers who check in to their own comfortable lounge, where the crew serve welcome drinks and are introduced to their charges. When all guests are assembled, they are called off by suite number, baggage loaded in the baggage car and mealtime preferences registered. The superb dining car can seat half the train at a time, and early brunch can be chosen along with the early dinner, but the guests first have time to settle into the marvellous cabins before they start to eat. Entrance onto the train itself is a piece of theatre and the wood panelled and brass railed corridors barely prepare the guest for the richness of the design of the classical interiors, full of gleaming brass and glowing timber marquetry. 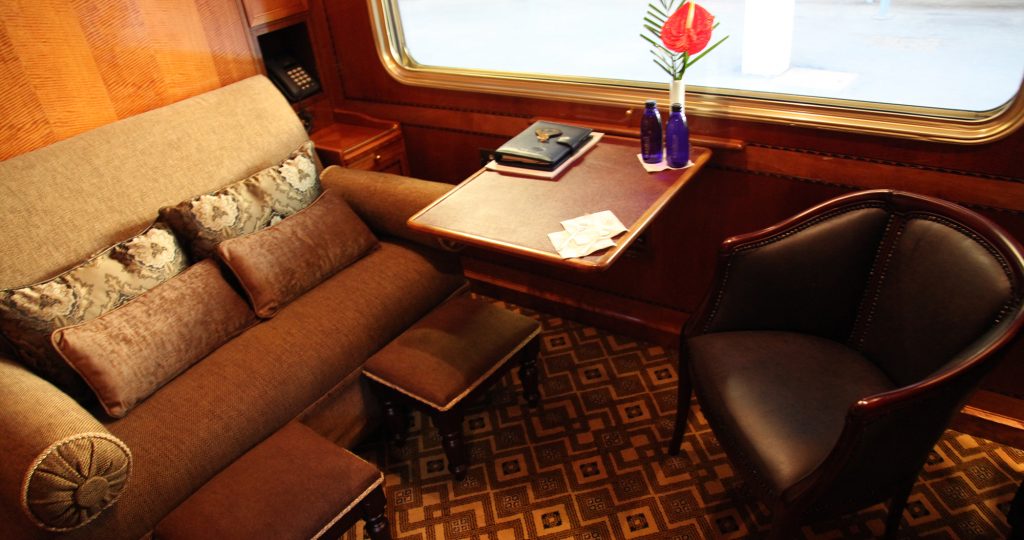 Double cabin by day, with its own bathroom with bath and toilet

I have stayed in some pod hotels, and some so called 5 star hotels with tiny bedrooms that cannot compare with the luxury achieved in these railway carriages. My cabin had a comfortable lounge with a huge picture window and its own gold tapped en-suite marble bathroom, complete with a bath – yes a bath on the train! The choices of cabin include a special provision for the less able and larger luxury cabins with more floor space. Twin or doubles, bath or shower complete the choice. 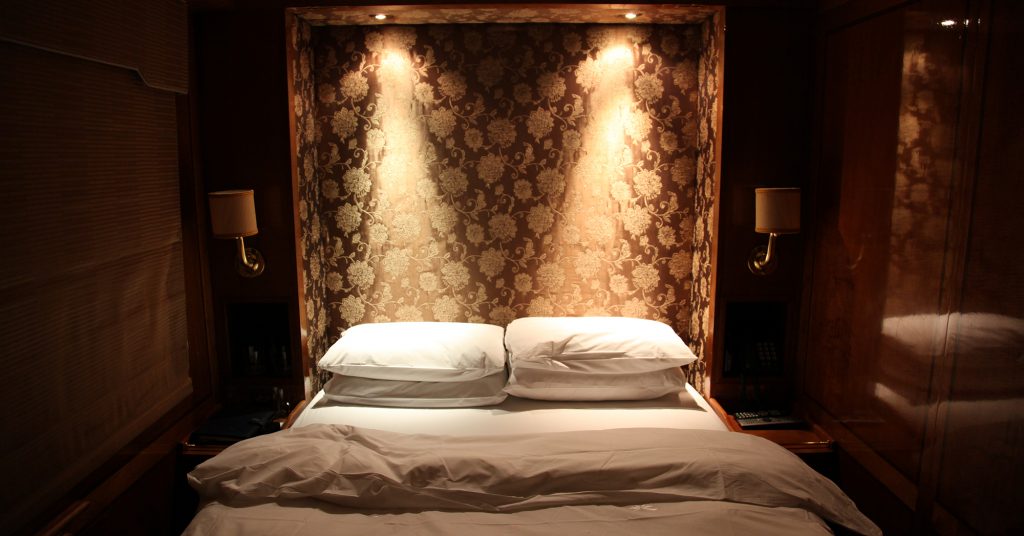 Double cabin converts at night into this beautiful bedroom 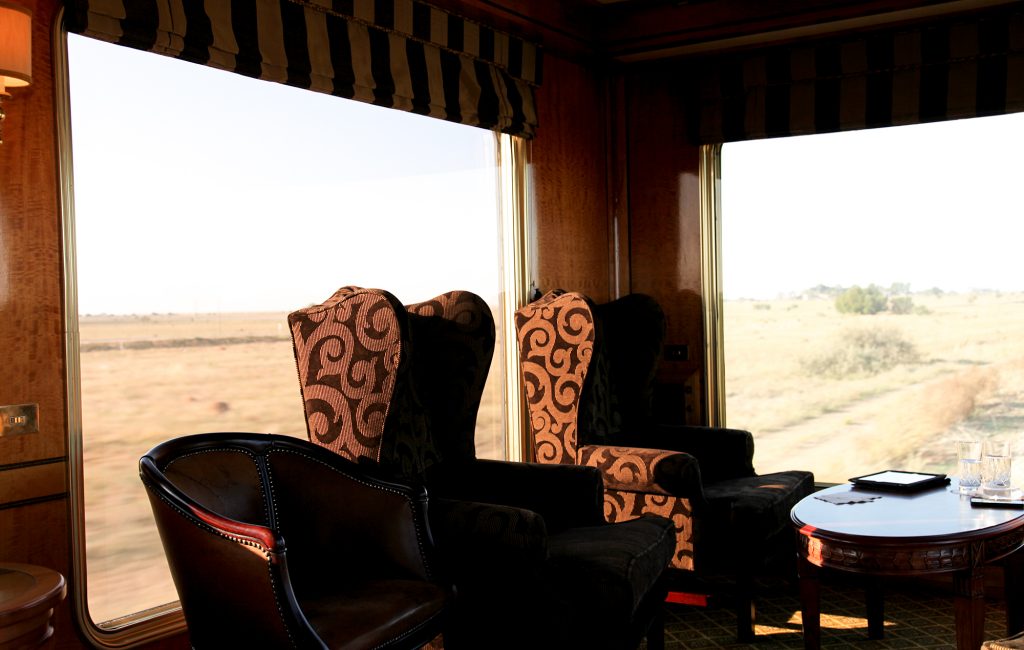 The prize seats in the observation car. Waiter drinks service throughout the trip

Unlike many hotels the train offers a smoking lounge, up front, behind the two diesel engines, but this is the only area of the train where smoking is permitted – and the Chinese tourists took advantage of it, booking the closest cabins. The restaurant car was in the centre of the train, and immediately behind it was another, non-smoking saloon bar. After more cabins the last carriage was an observation car offering 360o views of the landscape traversed. 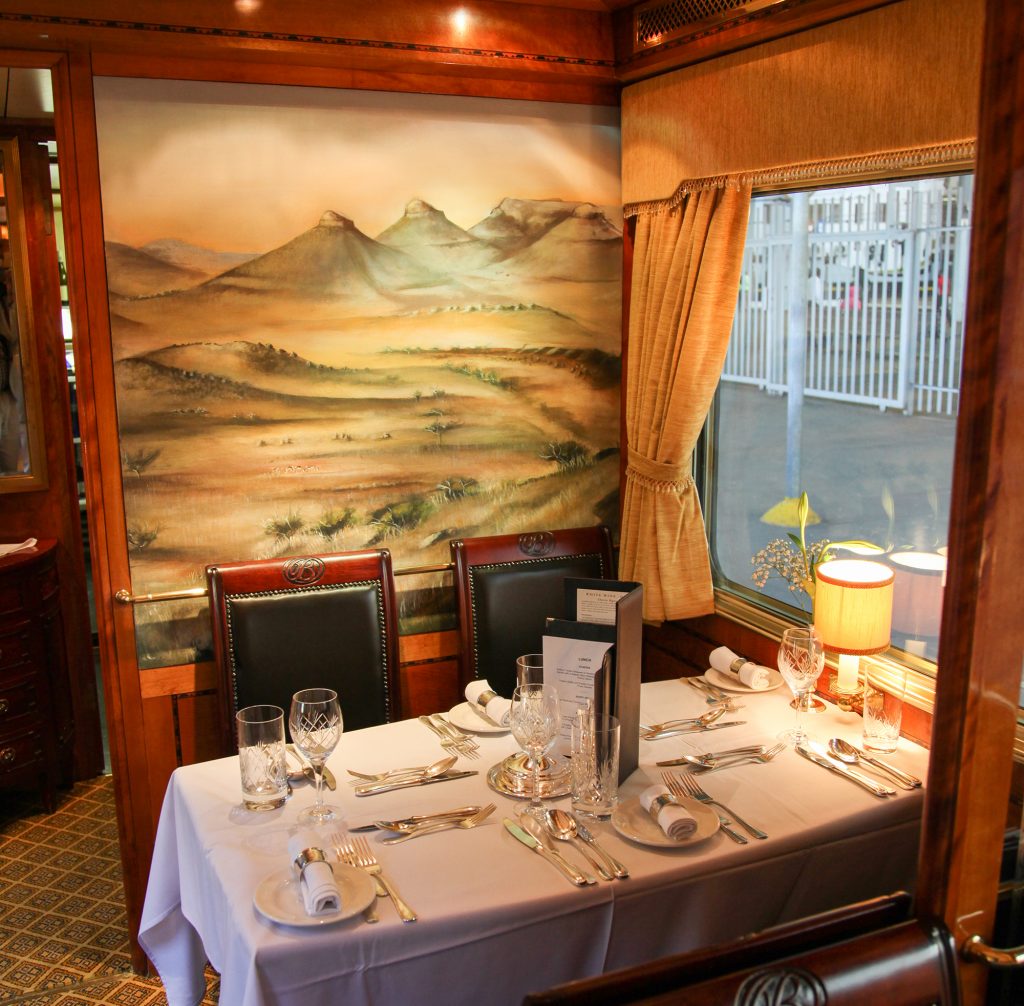 The advantage of train over plane or auto is of course the size of the windows. In the cabin each passenger could enjoy the view in comfort, many passengers locking open the carriage doors too, so that they could see clearly out of both sides of the train. Riding gently in air-conditioned comfort in complete privacy enabled conversation about the passing views, face to face or side by side, interrupted only by the occasional service from the cabin butler or the call to eat and drink in the comfortable restaurant or bar car. Yet it was possible to go out and walk the train, to stretch and converse with other passengers, to be social in a way not possible in a plane or auto.

The gentle ride at a stately 55kph carried the rhythmic clunk over rail joints. Missing in rail traffic in Europe where tracks are welded rather than jointed, the rhythm was the only sound track as movement rolled the landscapes past gently. Many passengers had cameras permanently ready, and the television in each cabin, which could be used to watch videos or TV, could also be tuned to an engine mounted camera to watch the track ahead. Although the cabins were small, at the evening meal the time was used to turn down and transform the cabin into a double bedroom – this functional change in effect doubling the cabin into a suite. The reverse process was achieved whilst breakfasting the following morning.

Sleeping on the train was far more comfortable than on a ship. It lacked that thumping juddering crash experienced when a ship hits a large wave, nor was it possible to hear the engines. The only sound was the rhythmic, soporific noise of iron on iron, the steady clunk setting a rhythm that lulled to a sleep only broken when silence came if the train stopped in one of the rail loops to allow for passing freight. Insulation was very good, so no sound from outside the cabin apart from the wheels on the rails. 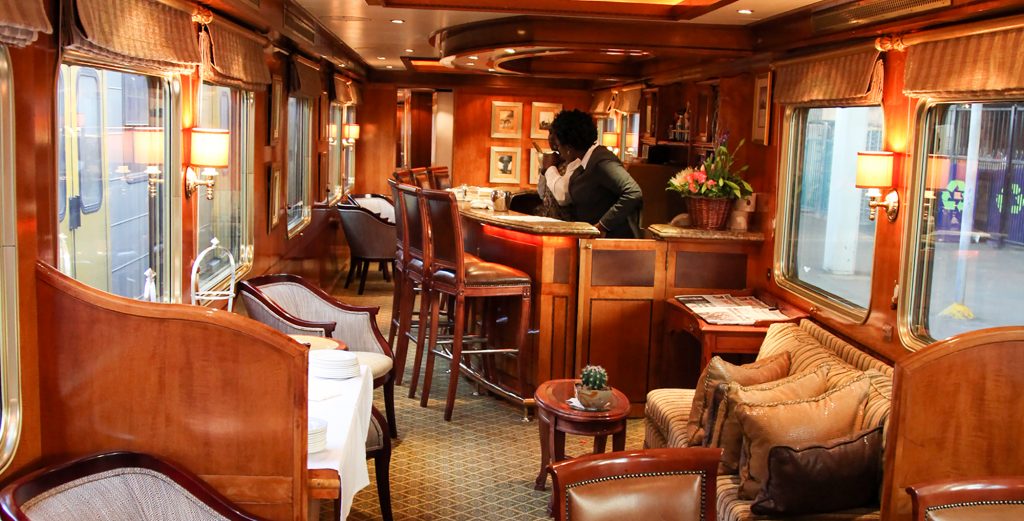 The restaurant car, beautifully appointed with marquetry and murals, brass and the gleam of polish, glistened with white linen and fine china. Service is superb and the fare included all the food and drink one could hold. Yet still there were the views. Occasionally the disparity between the wealth in the train and the poverty still there in some townships would become evident as a signal caused a stop where passengers looking out became like zoo exhibits as people waiting on an adjacent platform looked in, but generally a smile and wave was the response from outside to a lifted glass within.

The train showcases views of the mountains, the Klein Karoo and the veldt, and stops to provide a view of one of the world’s largest holes, the diamond mine at Kimberly. No samples alas but for those with the money and needing the gleam, there is an exclusive shop on the train where diamonds and jewellery can be bought through personal appointment.

South Africa is changing, slowly, noticeably, and with increasing momentum as education (sorely neglected by the arrogant and frequently corrupt ANC leaders) and economic growth improve the lot of the majority. Sure, you must be streetwise when walking around the towns, but no more than one would be in parts of Southwark or the old East End of London. South Africa is safe for tourism, a good buy for Europeans and needs your tourist money to help the rainbow nation truly flower.

The beauty of the country is showcased through the windows of this train, as are the local standards of service through the charm and courtesy of the staff. Design harks back to an age when grace and pleasure in travel were key ingredients of the experience, when comfort was more important than style alone, and when customer experience ruled over the bean counters.

Using the Blue Train proves how it can still be better to travel than to arrive, if not in the UK.

Sign up on the right for emial notice of new postings