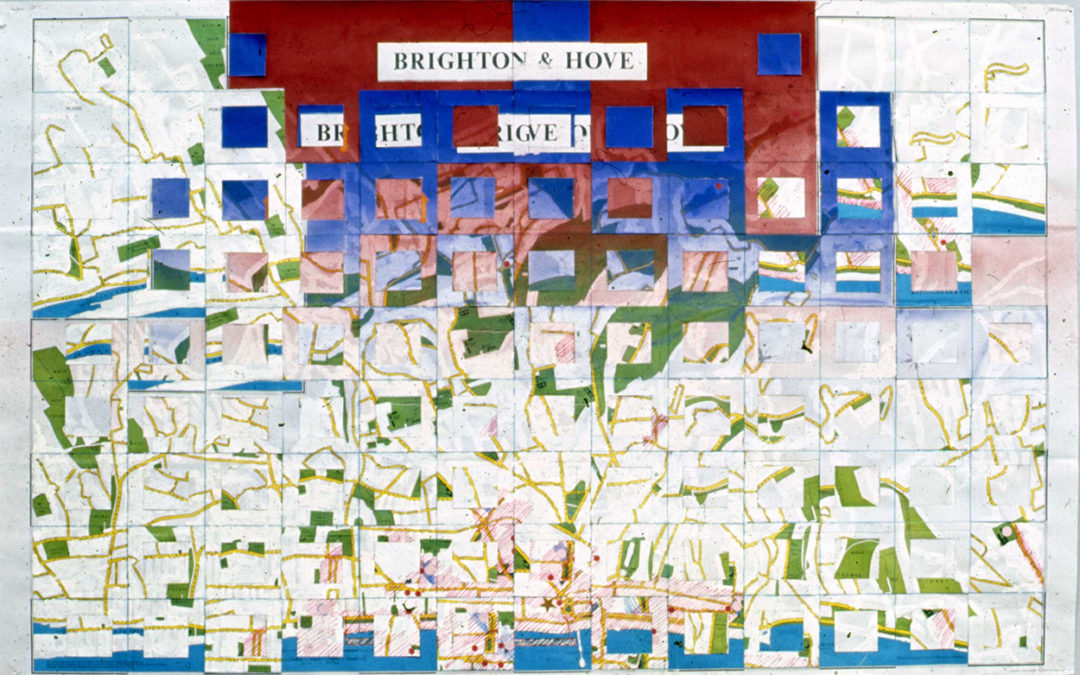 It began with memories. All my life I have moved around, and after leaving Brighton for the wetlands known as Lancashire, I began to record those memories in visual form. It would have been easy to work from photographs but those would only have caught an instance, and it wasn’t just a part of the experience I wanted but the whole sense of place and time. I chose to start reworking the locations on maps, adding colour and symbology to express the associated emotional experience. Coding works in keeping details private whilst allowing their existence to be acknowledged. 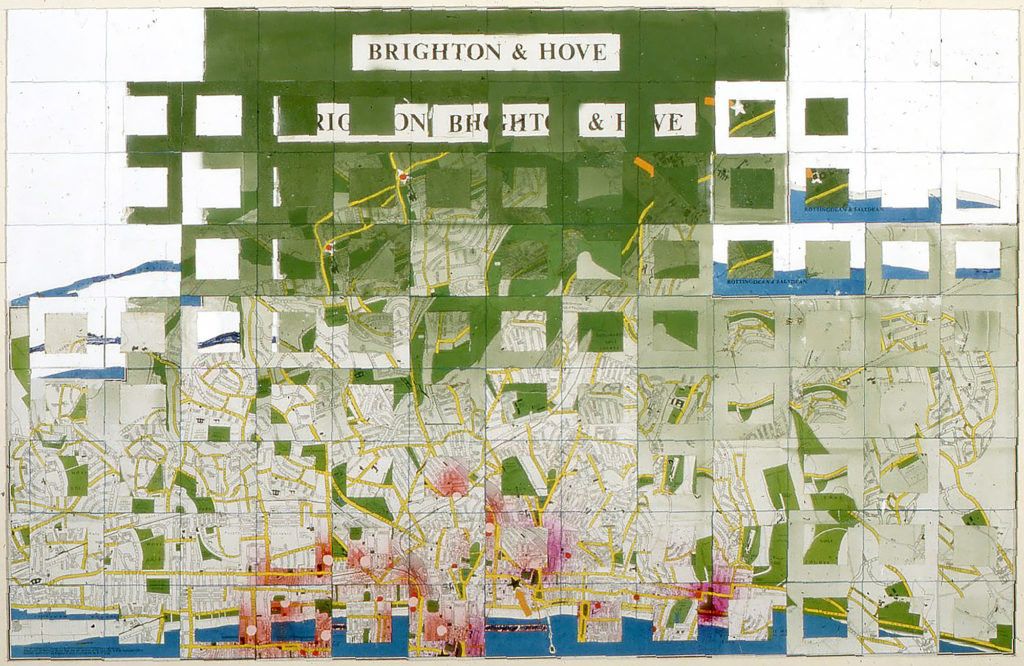 There was a secondary set of considerations too – the nature of maps and reading their data. Most maps are two-dimensional representations of a three-dimensional reality and rely on reading skills with an understanding of symbology to give them meaning, or, more properly, to allow their meaning to be extracted. Data is codified, and interpretation is aided by symbols, a key to which is often relied on being culturally understood rather than explicitly marked in a key panel. The missing element in my early maps was a key – to the colour coding or to the symbology. Perhaps shyness, more likely fear of the reaction of the others intimately involved with my life then governed its non-appearance, so the images remain shrouded in mystery. 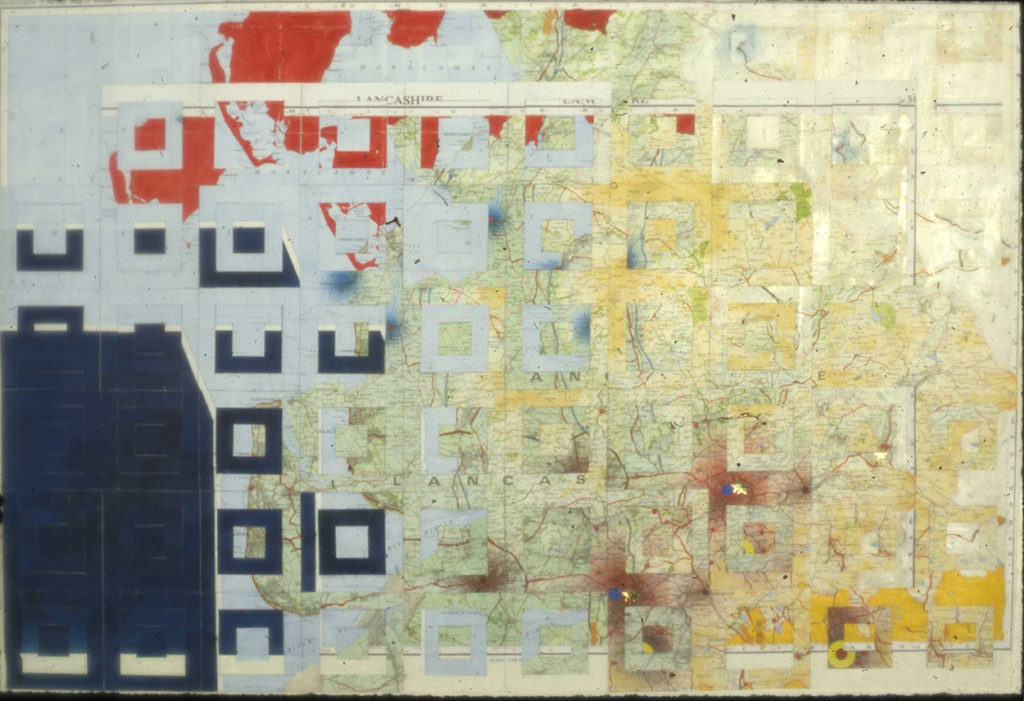 Lancashire as I knew it
Reading maps is also about history. For instance, if you look at the maps of London bus routes, you will find many of them end at pubs or hotels. This reflects the early horse drawn buses being used, which needed to finish their routing where horses could be watered and fed, many pubs being post stations from days preceding the motor vehicle and having stables and horse troughs. There is much data within maps to be mined by those with an educated eye, and my own re-creation works by changing the data displayed, but with life knowledge they can be read. 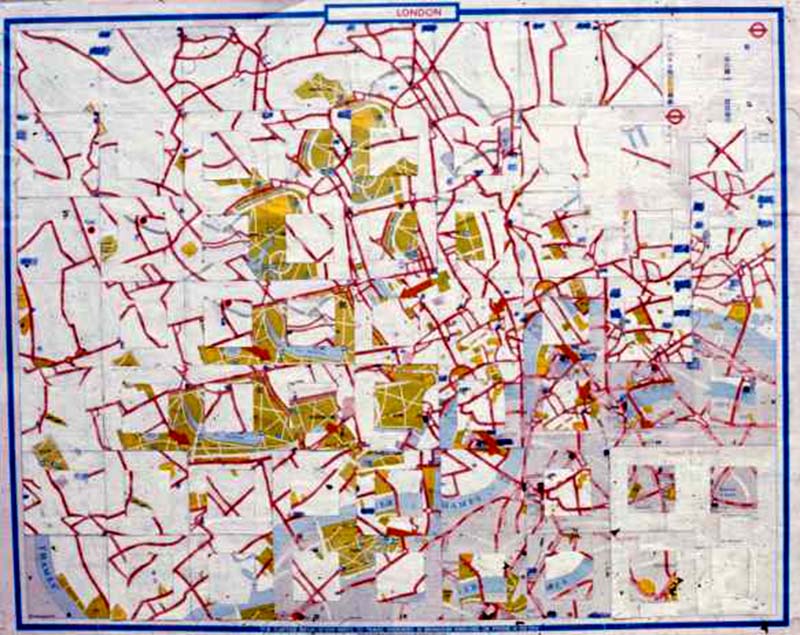 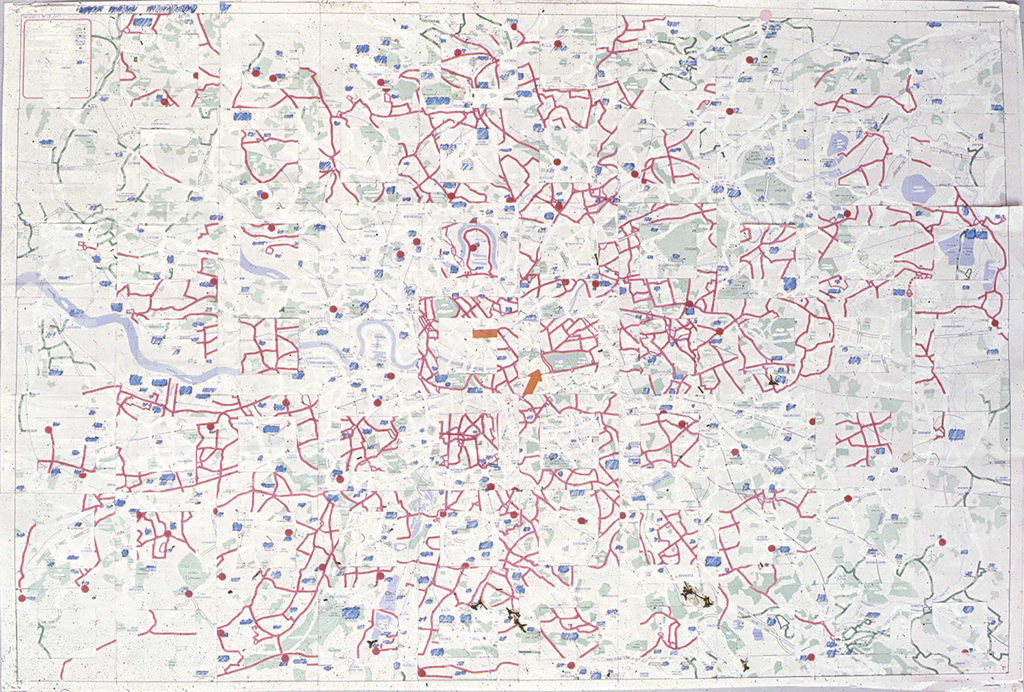 At its simplest this means that roads no longer necessarily continue but, as in the collages, disappear under one another – challenging of normal reading of the two-dimensional representation of the third dimension. The textural changes where the ghosts of painted out words stand out under layers of colour also challenge concepts of readership. I have always believed that paintings should be read in the language of colour and symbology, as two-dimensional representational illusions of space. This working of maps takes them into codifying the fourth dimension too – recording history, time, an element also seen in previous works such as the Four Seasons and Breaking Waves

The return to working with maps is reflecting a change in working that repeats a change I made in the 1980’s – maybe a reprise of where I was, a coincidence of life or just that my painterly development has reprised previous experience and brought me back to the same viewpoint, albeit with different eyes? Perhaps it is springing out of the disappearance of the grids in the paintings. Wherever it is coming from there are things in the mix this time missing from the last set. They are coming out of ‘now’, at least initially, not out of ‘then’. 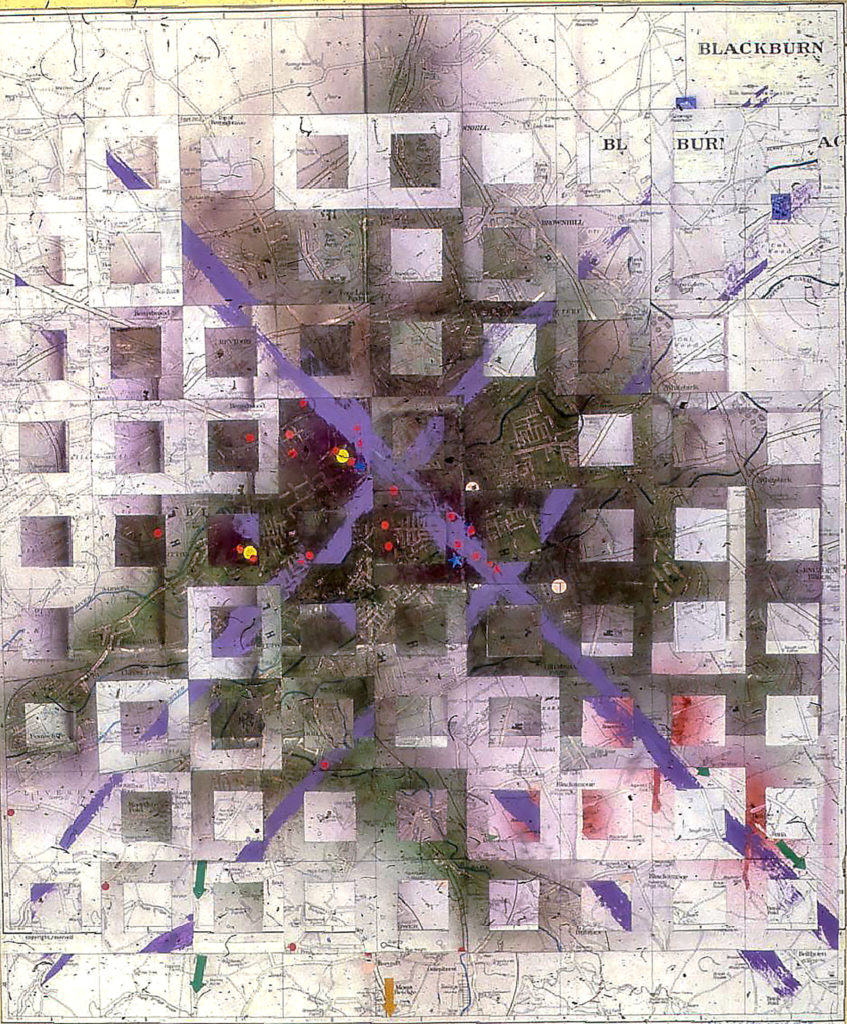 Darwen with Blackburn, where I worked initially as a dustman

The grid reference is an essential part of reading maps, locating and enabling. Contour lines are there in these too, and I think the threat to my seaside community from rising sea levels cannot be understated. Whilst my own home if about 15 metres above high tide mark, I have no desire to end up living in a beach front property where the beach is the remains of friends or neighbours’ homes. Daft fantasy? It is already happening in other smaller island nations. It is just one of the inputs I am considering how to add to the map.

Initially I am working with maps of Seaford but tickling at the back of my mind is the creation of a new series of memory maps featuring places that are special to me – Seattle, Cape Town, Berlin for example. With the original series I had one or two commissions to create personalised memory maps for clients and would be happy looking at that again. They usually failed to come to life because Clients could not share experience unguardedly, honestly and unconditionally, the same reservation that make me hide the key perhaps. The map created for an individual may not reveal all but to be convincing I need to know all when creating one. I am right at the beginning of this process again, much as I was with the flower grids, which produced such a sustained body of paintings including the destruction of the square and looking hard at photography and colour.

For now, I am like a Greek god maliciously deleting houses, whole roads and communities, removing data as preparation for adding new information. In a sense I am priming the canvas, making ready to create a new mythology. I am changing the meaning of the map from map into a piece of artwork. The march of the square defined this time by a geographer’s grid reference, continues to challenge.