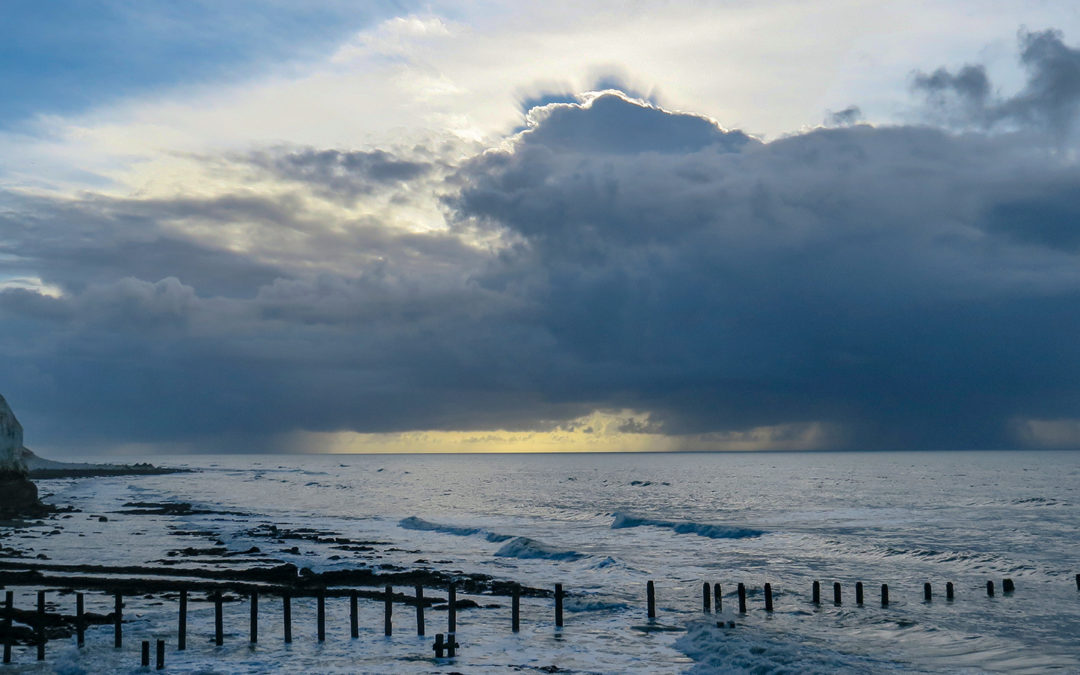 No “Quinquireme of Nineveh from distant Ophir” and the only stately galleons were the rain squalls sailing majestically up the Channel as I walk the shingle shore. Closer to the water the smaller stones glistened like “diamonds, emeralds, amethysts, topazes, and cinnamon,”. There wasn’t a “dirty British coaster” in sight, the closest to a “gold moidores” is the bright yellow of the Transmanche ferry reversing its way out of Newhaven harbour. The phallic symbols of the lighthouse and Brighton’s i-soar gesture towards it symbolically, as if Brexiteers.

The golden ferry with Brighton and Newhaven gesturing goodbye 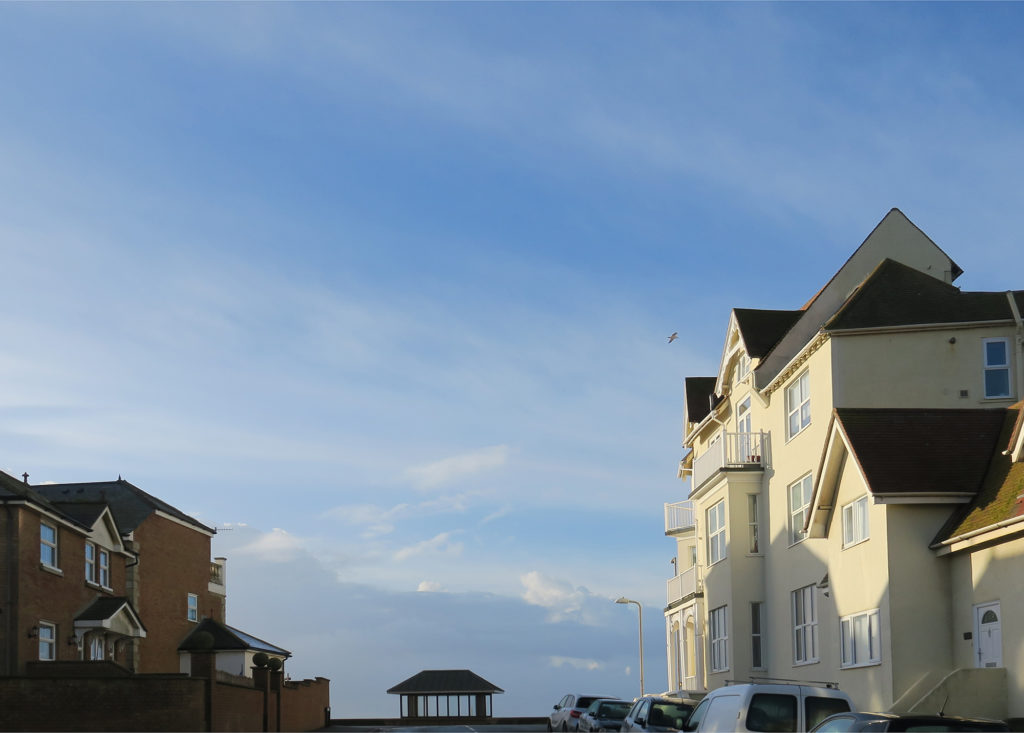 The light of a Hopper
Gentle this morning the waves on the shore. The crashing thunder of the storm is no more. Gently foaming surf reminds me of an African beach from earlier in the year, a sojourn safely stored in my memory. Yet Seaford entrances, the mist of salt from breaking spray making distant figures look like Lowry matchstick men. The steep shingle bank rising higher than my head as it slopes up to the characteristically named ‘Esplanade’ and the pale colours of houses lit by the sun reminding of the light of Cape Cod as portrayed by Hopper.

The images call to mind early paintings sold so quickly in Brighton in the 1970’s, and for a brief moment I entertain remaking in the style of those images in my mind – but that was then and there can be no going back, besides which photography now enables hand and eye to work together as never before by enabling manufacturing images to scale and colour intensity technically beyond me in the 1970’s. Painting the sea will takes its turn again eventually.

Fishing floats accessible only by sea, destined never to rot but break down into small pieces to be eaten by seabirds

Along the beach a lone detectorist takes advantage of the way the sea has pushed the shingle up. He sways with his scan, his miniature pick axe lackadaisically digging in a way that betrays more the expectation of finding nothing than an excitement of discovery. At least his detector and my camera both pull us to walk the shore. I pick up the crushed plastic bottle he passes by, I am infected with my partners determination to pick up all the plastic she sees. Further along is a large pile of fishery waste – buoys, plastic barrels, ropes, nets and floats, all part of the 40% of plastic waste in the sea that the fishing industry contributes, piled up by the weekend beach clean enthusiasts.

Erected another time Europe tried to bully us into union

The sun weakly breaks the clouds, which seem to gather in intensity as I walk. Their thickening indicates possibly more rain but not threat enough for me to head for home yet. In fact, the sun is warming, there is not much breeze and the waves just make gentle susurrations this morning as they continue their unhurried invasion of the land. Each year they reach higher, persistently hungry to drown coastal dwellings, pull down chalk cliffs, and our profligacy aids them.

I pick my route on way back from bell-ringing. Ringing Remembers recruited over 2,800 new bell ringers in the end, more than double its target, and rejuvenating tower bands, bringing back into life towers previously muted by loss. This morning another learner Peter and I took part in ringing rounds and changes. Afterwards we whispered to each other that at least we knew enough now to know when we were in the wrong place.

Debbie spoke of loss and Stuart and I looked each other in the eye as the man who died was our age, a shiver of mortality as the choir below the tower sang hymns. We descended the tower to slip respectfully out of the back door of the church as lesson was read. I imagined tower gangs leaving riotously in the past when the vicar and his ringers didn’t get along (one vicar banned bell ringing in his church altogether as he so disliked the ringing band). The beach is my way home.

As I walk, I ponder my mortality, breathe deeply of the sea air and think this is a much better way of connecting with Gaia and the gods than on my knees in church. My heart also forms worship in the studio where I create beauty that few come to see.

Out of the night that covers me,
Black as the Pit from pole to pole,
I thank whatever gods may be
For my unconquerable soul.

In the fell clutch of circumstance
I have not winced nor cried aloud,
Under the bludgeonings of chance
My head is bloody, but unbowed.

Beyond this place of wrath and tears
Looms but the horror of the shade,
And yet the menace of the years
Finds, and shall find me, unafraid.

It matters not how strait the gate,
How charged with punishments the scroll,
I am the master of my fate:
I am the captain of my soul.