The soft susurrations of shingle stones in Sussex on calm days are few by comparison with the shattering crash of waves in mad March days. Pebbles can be thrown hundreds of feet by forceful waves measured on the Channel wave buoy at nearly 14metres from peak to trough. Chalk cliffs crumble and crash into the surf as the land is forced back under the aggressive assault of a rising North Atlantic sea, driven by the continuing storms of the dying winter season

At the same time the late summer turns to autumn in the South Atlantic. The soft sound is of gently breaking rollers on shining sand under a scorching sun. Surf slowly slides back into the next low wave leaving shards of sparkling crystals gleaming damply on the African shoreline. The next wave gathers gently, not roaring but strolling ashore, not crashing on but caressing gently, slithering softly up the sand.

The gentle rollers of the South Atlantic

The Sussex shore of chalk and flint pebbles is forcefully hammered into smaller shards by the power of the sea, destructively claiming railway lines, cottages and people in its assault on the gleaming whiteness of the cliffs. Gradually the flints are ground down into pebbles, the chalk broken into tiny pieces contributing to the growth of beaches at other points on the island’s long coastline. Beach positions determined by man’s whimsical addition of ‘sea defences’, harbours and groynes, as much as currents and weather.

In the southern sea glittering crystals of sand are fine at the oceans edge, coarsening as the larger pieces are pushed higher. Fine grains are pummelled from shards of shells and bones. The remains of once living creatures are broken and shattered by the continuous elemental motion of the sea. The increasingly atomised remnants of mussels, molluscs, bones of birds and beasts, perhaps also skeletons of lost seafarers or careless cliff walkers stripped, crushed and pounded to miniscule unrecognisable pieces as they are unsentimentally reprocessed into shining silver sand.

Shells on a beach

Dogs scrabble and seabirds squabble over morsels. Children paddle whilst parents beach comb collecting interesting fragments of shells and driftwood, flotsam and jetsam, to become collections, curios or ornaments for mantle and wall.

Dawns soft light over the South Atlantic off the African coast

Evening sunsets bring fiercer fiery colour as the sky turns red, clouds generating fearsome patterns that seem to reveal the faces of mystic gods of legend, whose battles shaped early histories. New gods have replaced old. Thor and Zeus, Osiris and Baal now replaced by Mammon and Celebrity, Science and Rationality, but none impact the indifferent sea any more than the will of Cnut did. Centuries and millennia have passed. Civilisations have risen and fallen, but still the waves surge, roll, with softness and serenity, sound and fury, timeless, elemental. 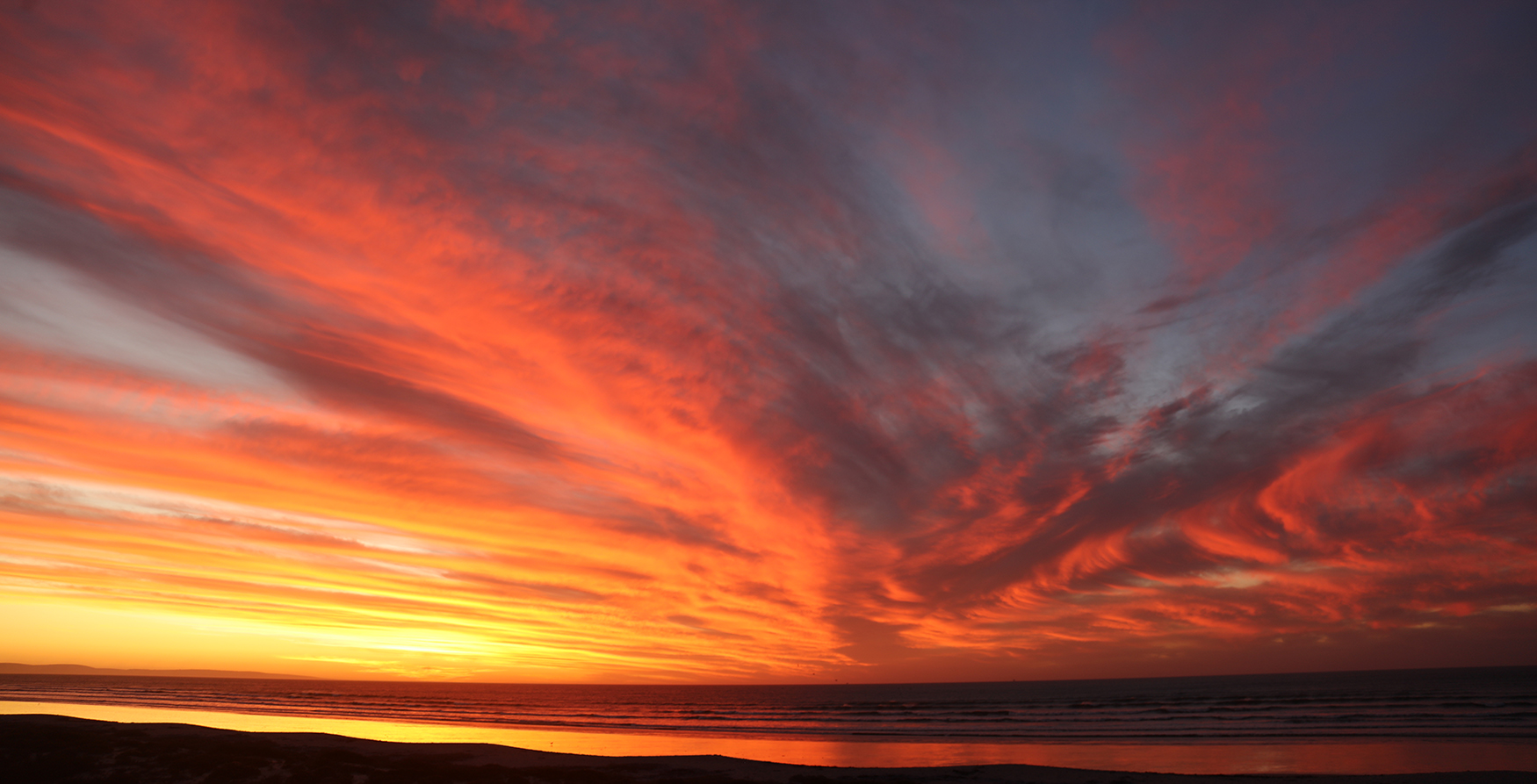 The gods look down

Still the sea moves, calmer when the breeze has gone with the setting sun. A remorseless rhythm now driven by the moon continues to crush rock and shell, flint and bone, creating more fine silver sands to wash ashore. Sunrise follows sunset as the world turns, but no man experiences eternity.