Remembrance and the Mary Rose

I have written 3 pieces previously about my efforts to learn to be a bell ringer. My goal was to ring in the international remembrance ring on the 11th November, which I did, an emotional moment, but I have continued to learn, progressing to rounds and beginning to ring ‘changes’. I continue having become hooked on the joys of this deceptively simple yet intellectually challenging craft. I am even beginning to learn ‘bellvish’, the bell ringer’s version of the Elfin language in Lord of the Rings. It is said that the horrors of the First World War and continuing German Imperialism under Herr Hitler inspired Tolkien to write his story of the humble hobbits fight against evil, considered by many critics as a simile of national struggle.

You can imagine my dismay then when I heard a man TV interviewed recently on his factory floor saying that his job was more important than freedom, when asked about Brexit. For centuries this island people has fought against largely unelected continental tyrannies. From Magna Carta on we have similarly fought against unelected tyranny on our own soil. Many lie in unmarked graves having given their all so that we can enjoy our freedom today.

Recently I visited the stunning Mary Rose Museum. I first went to see the Mary Rose soon after she was raised from the seabed. I find it ironic that the most recent discoveries have come about from dredging to clear a way into the naval base for her successor craft, the Queen Elizabeth class carriers. The timbers and artefacts have been added to the new museum, a part of the historic Portsmouth dockyard which continues to celebrate the history of those who have served to defend our freedoms in the Royal Navy. 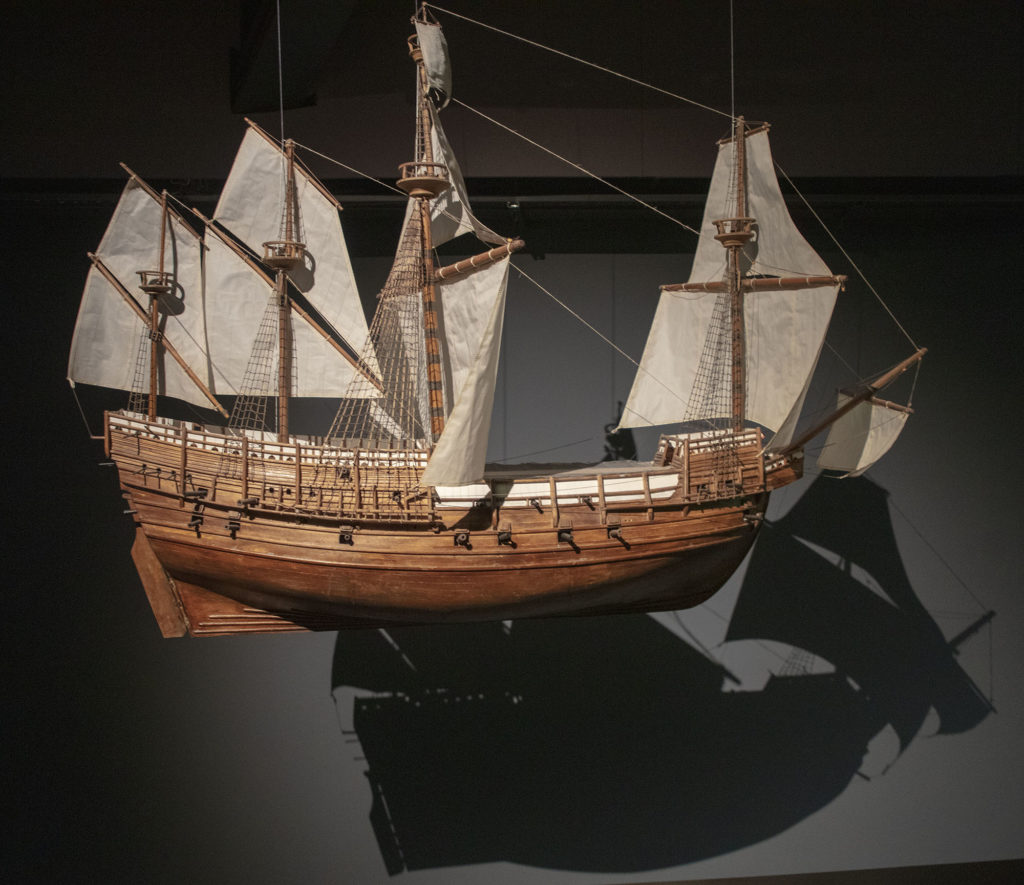 When Henry 8th became king in 1509 he only had a handful of warships at his disposal – usually, in times of war, merchant vessels would simply be loaded with guns and pressed into service. However, with threats both from the Scots to the north and the French to the south, Henry knew he needed a standing navy, available at a moment’s notice. Thus, he got to work building his ‘Army by Sea’, starting with two vessels, the Peter Pomegranate and her larger sister ship, the Mary Rose.

The conserved hulll, now free of the curtain of spray, is upright. Floore opposite reflect the ship and contain in the right relative positions, artifacts recovered, from guns to cups, arrow to shoes.

Part of the beautiful displays are the cabinets containing items discovered in the cabins of individuals. Skeletons recovered so far allowed facial reconstruction to show images adding the faces of the dead to their belongings in the display cases. My partner found this disconcerting, but for me it brought the spiritual presence, the ghosts of these men from Henry 8th’s navy, into the room. Their spirits haunt this stunning museum, reminders everywhere of them in the initials, even names, carved into the recovered dishes. It is intensely moving. 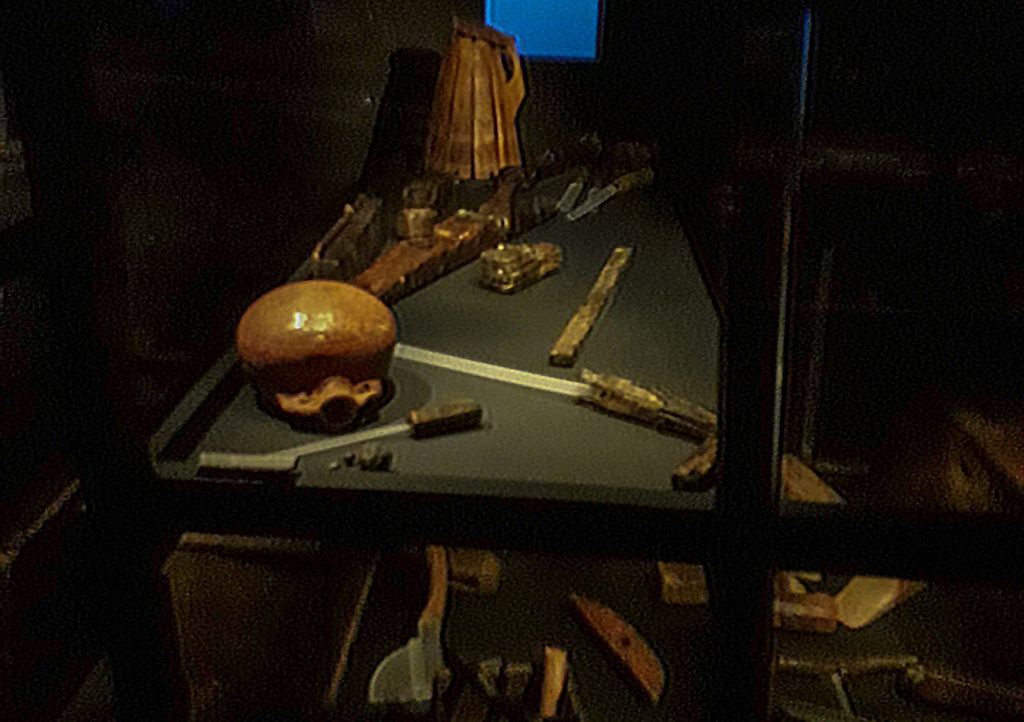 Carpenters tools and personal effects – perspex represents items rotted away- all the rest, everything, has been recovered from the wreck

It is reckoned that there were 35 survivors of this sinking, which took place during another skirmish against the French in 1545. In effect the Mary Rose was a war grave, her crew, reckoned in excess of 500 sailors and soldiers, some of the many who have died defending this country. Henry’s navy was the precursor of the under-armed ships the Royal Navy operates today. Ironically the number of skeletons recovered from the wreck so far is the same as the number, 179, of Britons who died in the war against Iraq.

Ringing for Remembrance was about those who died in the First World War – grandparents and great grandparents of many of those of us ringing. The poppy stands as a symbol now for all those countrymen who have died in Britain’s wars, and it remains that 1966, when I first went to art college, is the only year in living memory where a Briton has not been killed on active service. Perhaps Harold Wilson’s government paused, shocked their growth of higher education had allowed oiks like me to get in.

It didn’t last and many continued to die as they fought for their country, believing its continued independent existence was something worth fighting for. Now the cry is not ‘freedom’ but ‘it’s the economy, stupid’, as those freedoms appear to be surrendered to a new European super state because of supposed economic needs. I have always created my own work opportunities, from early days as a dustman to the high life as a company director. As a nation Britain has always created its own opportunities too. Now greed rules.

Magna Carta started a process of seeking freedom from the tyranny of wealthy elites, something we have a proud tradition of in Britain. Through cooperatives, the Trade Union movement, the Suffragette movement and beyond we have sought to empower the voter. Now money rules – it must do, or how else would bankers get a £50 billion subsidy after collapsing the economy rather than going to prison? Now it seems the wealthy elite are again in the ascendance as these quotes from 3 different MP’s reveal.

“Coming from a non-political background I naively thought being a MP was about making a difference to people’s lives. Today I saw the reality. Not sure there is even democracy in this country anymore. The powerful elite seem to know best and openly mock the rest of us.”

“What’s really happening here is the people came to a conclusion that many Parliamentarians do not like. If Parliamentarians finish up standing in the way of the British people that might have very dangerous consequences.”

“Up early to prepare to speak in the debate later today. These are serious times. Too many MPs don’t appear to understand that the reason many people voted Leave is because they felt the political establishment ignored them. Appears they were right.”

Freedom can be a nebulous concept, difficult to put a price on although many paid the ultimate price of life itself. Yet for centuries not just Britons have fought for freedom. Black slaves fought, and their descendants still fight. Colonised countries fought and died (remember Jan Palak, the Czech who burned himself to death when Soviet armies marched in to Prague?) and still fight for their freedom. Now it seems, for Britons at least, money rules. Were the Mary Rose and Flanders, Blenheim and Trafalgar for nothing?

Sunset over the Elizabethan sea defences outside Portsmouth harbour

At least when I am ringing, I can forget it all in the concentration needed to stay in the right place.