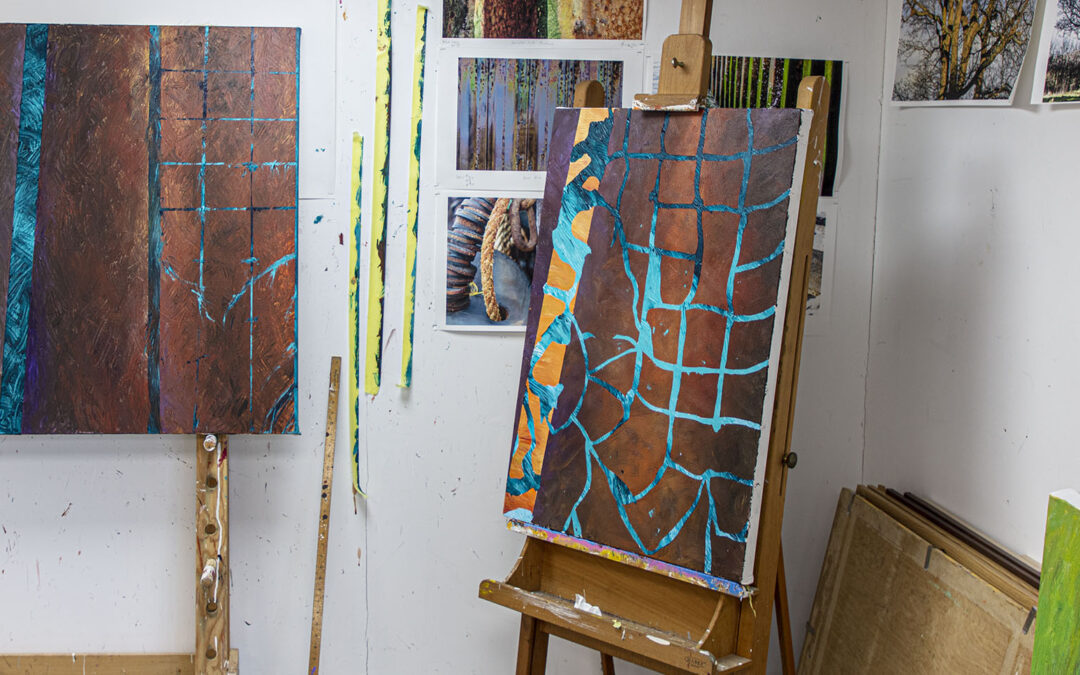 The Renaissance was a period of renewal and innovation during the 14th, 15th and 16th centuries: in painting characterised by innovations in paint technology and perception. Some, like Utrillo in his history paintings, focussed on the newly formalised system of perspective. Others like the ‘bad boy’ Caravaggio focussed on using the new paints to creatively capture light and shadow, ‘chiaroscuro’. It was known as a ‘Renaissance’ meaning rebirth and the period is named so because it was marked by a new interest by wealthy patricians in culture and collecting. It spread across Europe leading to great changes in art, literature, music and sciences, and altered the nature of Western civilisation.

In the last 100 years we have seen a similar explosion in art and technologies and a growing mistrust of science funded by corporate interests. In the visual world this has altered the nature of art objects, with moving images, photographic images, holograms, new materials and the ability to create alternate realities in 2d, 3d and even 4d form alongside the growth of wealth and the middle classes making a ‘renaissance’ a continuing part of human development. Some argue that innovations like computers and GPS have killed older mental skills in the way that the machine age came close to killing many older manual skill sets – for example Satnav systems mean a generation is growing up not believing we once found our way around using paper maps. It is arguable that the part of the brain that needed for map reading is atrophying because it is no longer required.

Coastguard Cottages at the Cuckmere river mouth, condemned by inaction by the National park and the Environment Agency

I make art using paint on canvas. I also create images using contemporary print processes. The ‘old fashioned’ making of an image by spreading fine drops of ink on paper by pushing them through a mesh is now, like stone masonry, a craft skill not a necessity. The use of fabric stretched over a frame to make silkscreen prints has been replace by placing those finely made droplets onto art paper by a mechanical tool we call giclee (an inkjet printer). If you read my cancer blogs (all listed at the end of Towards Journeys End – PatrickGoff.com) you will understand how it caused my cancer and why I so welcome being able to print using a large sheet giclee printer.

My processing also starts with traditional visual ideas, with looking, then progressing maybe from drawings, more often from digital photographs which I crop, process and alter on the computer before drawing to refine/define further, taking onto a larger scale through works on paper and then distil onto my larger scale canvases. The camera technology has changed rapidly over the last 30 years, become a ubiquitous tool and creating whole new areas of creative endeavour in much the way technical changes made possible so much of the work of Renaissance artists once they were able to work on canvas with oil paints. Gone are my early days in the 1970’s, working by hand to mechanically enlarge and exploit paper photographic prints (are you old enough to know what a Grant enlarger was?) 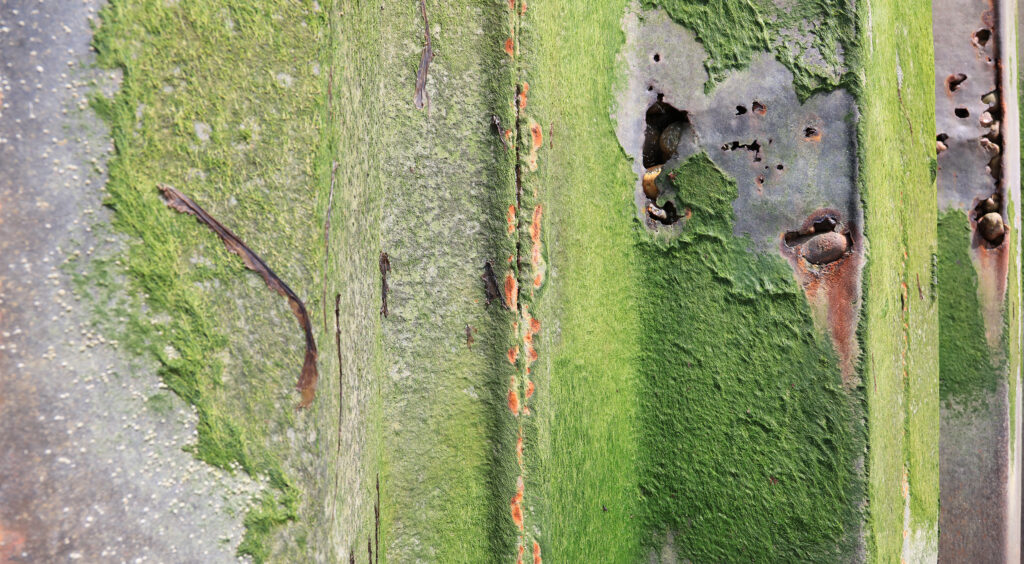 Part of the sea defences

In my last piece I wrote about Tretchikoff and the popular. The nature of realism in painting has been changing but the public as ever lags behind in appreciating what artists are trying to show of the state of our world. My own work may seem abstract but is strongly based in going out and looking at the world around me, supplemented by many years travelling to write about how different countries used design and their own visual histories, and how their visual cues were different.

If you have followed these blog posts since I began them in 2013 (they are all on the website) although in some ways they are a continuation of my writings in the HotelDesigns and other magazines for over 20 years before that, you will know how I have struggled to maintain a working habit through various setbacks, from diabetes (beaten) through cancer(beaten) and this latest which unfortunately is apparently unbeatable. I have a gradually crippling arthritis in my spine, the surgeon saying if it were a knee or a hip they would replace it but they as yet can’t replace a spine…  As my working method involved initiating by seeing on a walk with a camera or series of camera, that this is going to be increasingly restricted is a blow. It will not get better. 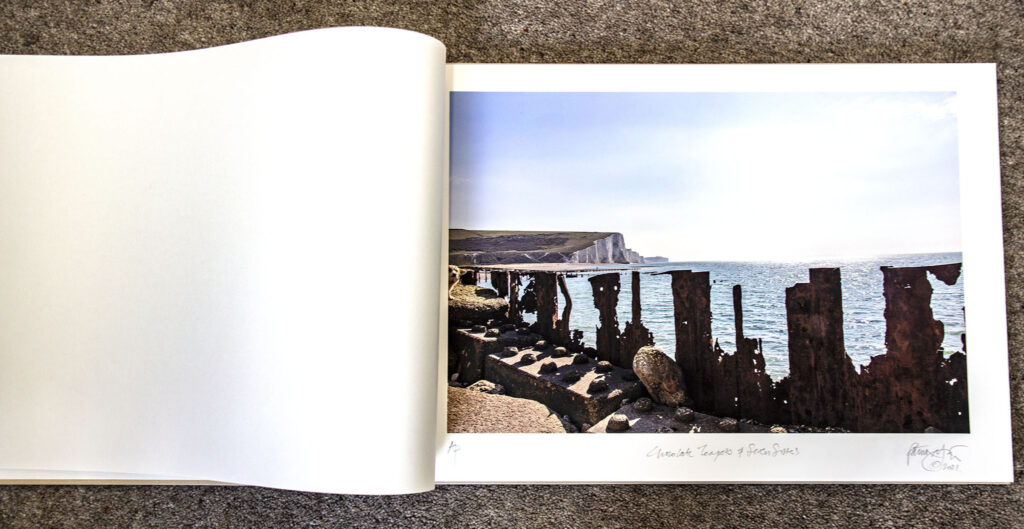 ‘Trust in Rust’ A3+ sized book of giclée prints, a mix of photographs and the resultant images. This one is entitles ‘Chocolate Teapot’ because sea defences like this at the Coastguard Cottages are about as much use as the proverbial

A blow it may be but not a terminal blow. I have been using a camera for many years (see, for example, my early images of London). Recently I have produced a book, ‘Trust in Rust’ carrying 20  A3+ signed prints  of photographs and the resulting paintings (you can see a copy in collections at the Towner Gallery in Eastbourne) and I have started making a second book of the images in my current series of Fisherman’s Tackle paintings. In doing so I began looking back through my archive of thousands of images and have begun to revisit them. This mining of my archives is already bearing fruit.

Currently I am working on a set of images based in older photos of the Cuckmere ‘defences’, looking at a world disappearing into the sea because of the sloth of our planning process. A world class iconic landscape scene, a heritage site, a draw for tourists all over the world, will vanish soon and I am recording the beauty in its decay and destruction at man’s hands. The works that result may be largely abstract and concerned with the texture and nature of paint and the movement of the hand, the autographic gesture, but are still recognisable to the visually aware, to those who know. They remain clearly visually linked to the original image as my studio process demonstrates (happy to show you). 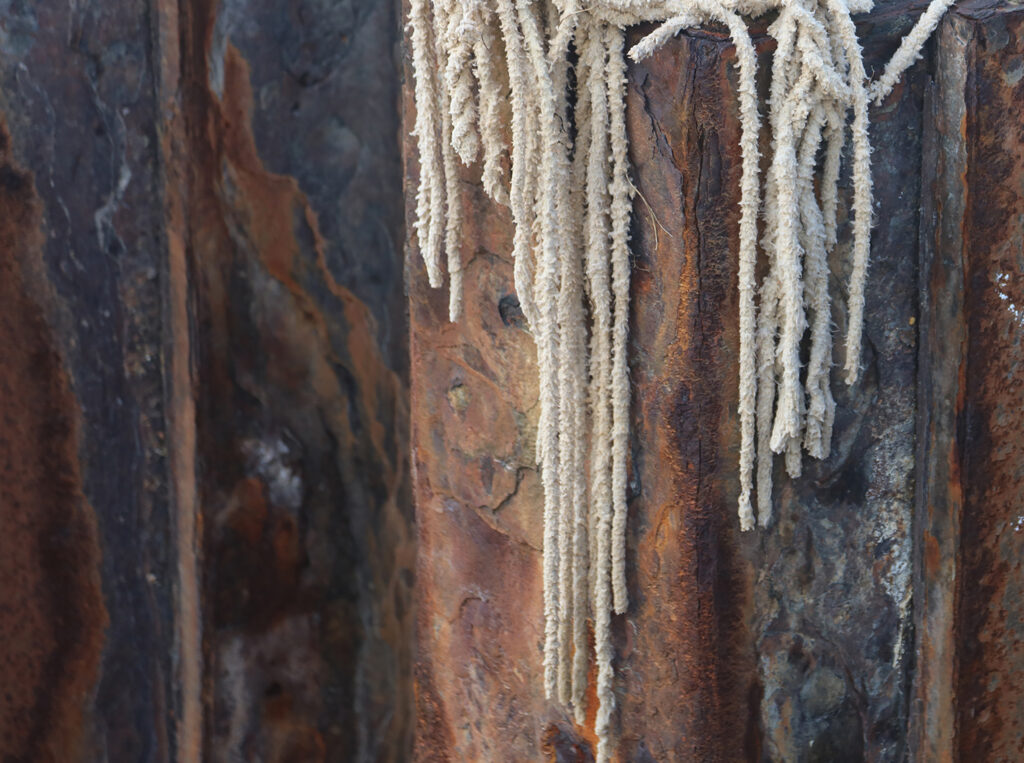 Monets work is on the surface an idyllic representation of his pond and garden, but it also reflects to sense of peace he sought as he watched his countrymen, friends, relatives, other artists, die in their hundreds on the battlefields of the First World War. Not insignificantly did he in turn fight the French government to make them take and house his works gifted as a moving memorial to the dead. Paintings can be seen as a decorative surface but many carry implicit messages that lay beneath their surfaces. Some like those of the Italian Futurists are almost explicit. Others form a part of the English landscape tradition by artists such as Turner’s ‘Fighting Temeraire’, the Nash brothers or the Ravillious paintings. 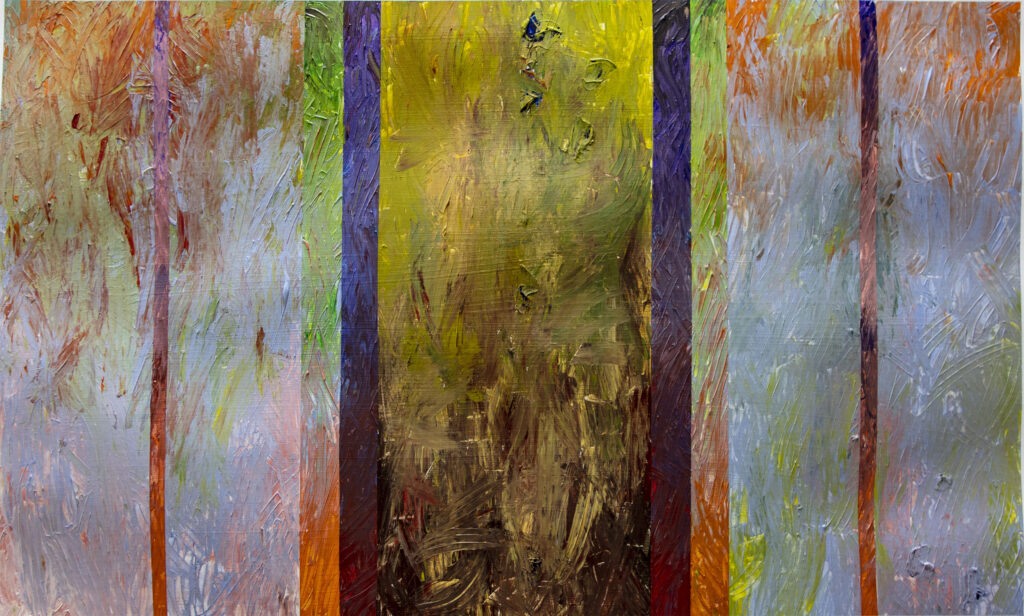 Many of the stories I have told over the years here and on Facebook have been told as photo essays and grow from the ability for me to roam the countryside. This wandering eye, which led to pieces  like ‘Surfs Up’ in experiencing a storm, is now more constrained. But the Renaissance for me has begun, and not for the first time after my sixth major operation. For over 3 months I have been too unwell to work in the studio. The last couple of weeks have been slowly building my stamina and getting my pain levels under control so that I can at last return to working.

My first step back was making a collage of a point I felt needed clearing from consideration. A subset of the BRotS images concerned the waves, carrying the shingle that smashes the defences. Two new ones were painted then cut and merged. It will go no further, that was a conclusion – High Tide and Low Tide. Removing that allowed me to continue to move on in exploring the ‘Fisherman’s tackle’ detritus. 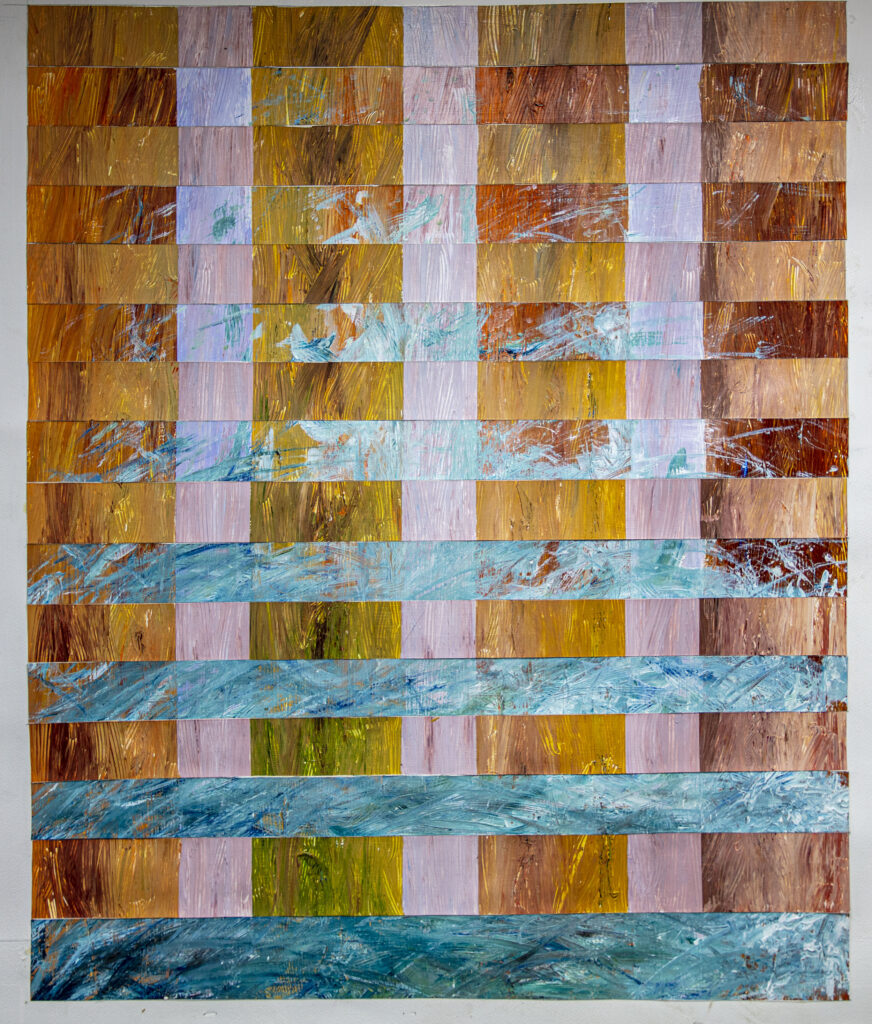 So now working from a found image (found in my archive of photos taken in 2016) I am exploring a new area of colour/pattern of decay with two primed A1 sheets on the studio wall to work out the ideas and hopefully a canvas to follow. Stretching the canvas is a challenge ahead. I seem to be able to work in bursts of a couple of hours for successive days before needing to spend a day working in a chair. But Matisse worked from his bed, so… 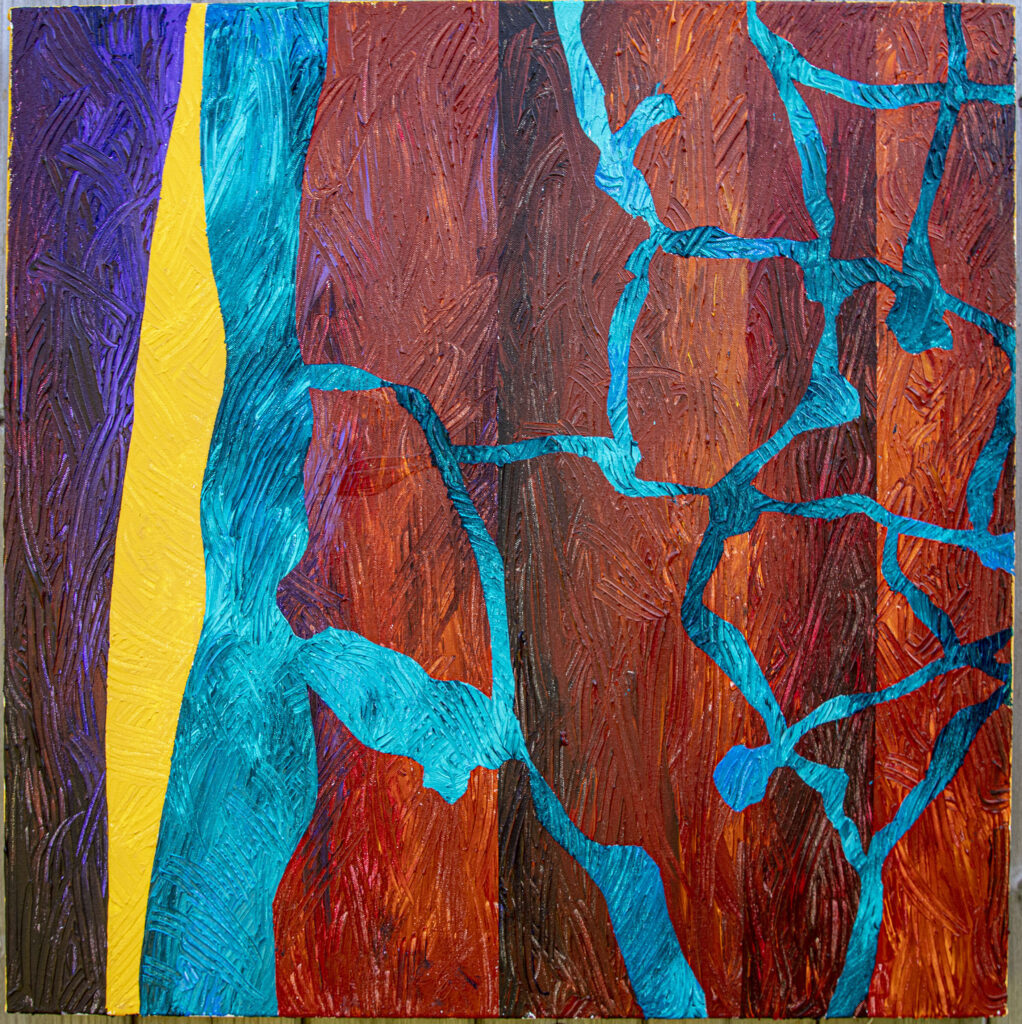 Broken Net. Another in the ‘Fisherman’s Tackle’ series. 24×24 inches, acrylic on canvas

I am determined to continue with my story, as because as I have said before, I paint therefore I am.

Come and see my work in September during ArtWave 2022, or email me to arrange a private view in my Seaford studio. Or follow my personal renaissance through the pages of my irregular blog – sign up to receive each intermittent publication