Death by a thousand cuts… 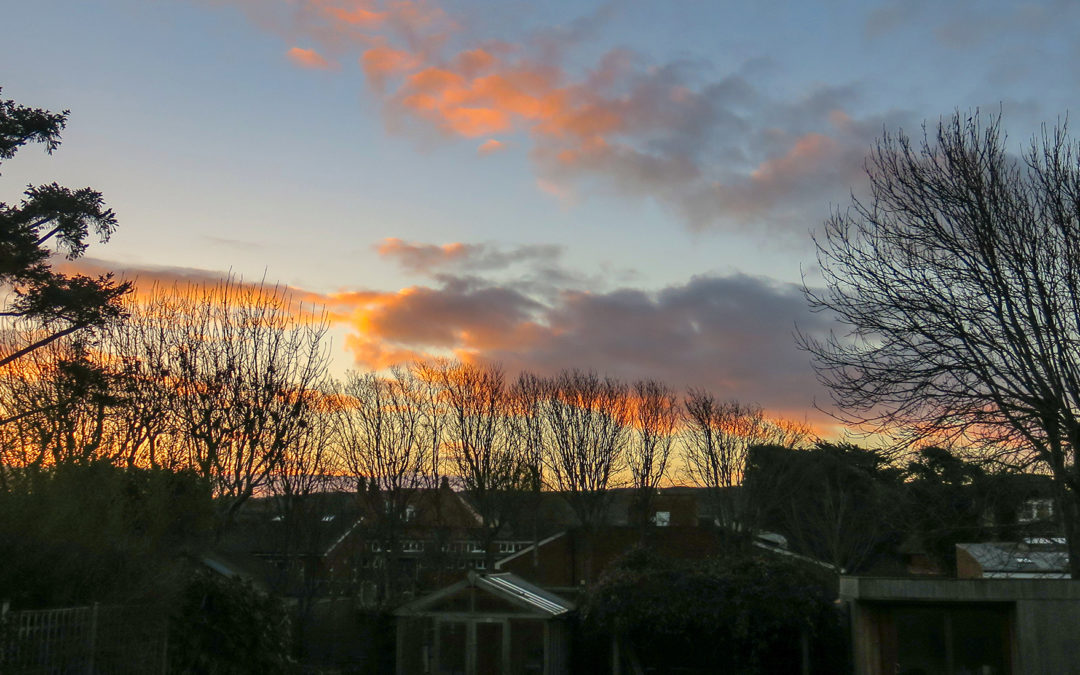 Every day I take the same photograph from the same place in the garden. I take it between 0630 and 0830 – the timing is dictated by first light, by when I get up, and this in turn depending on when the day’s activities start. Most days I go out in my dressing gown before preparing breakfast to take back upstairs to enjoy in bed with OH. The photographs and the days temperature reading go onto my Facebook page and twitter feeds and onto the BBC Weather Watchers website where, just occasionally they are selected for inclusion in weather forecasts – not often because they are always the same view, and picture editors at the Beeb prefer drama in their images, and the ordinary everyday changes are not dramatic enough for them.

I love patterns in life and the regular snapshots (1400 of them to date) have been a part of my reflection on the patterns of weather and seasons, enhancing my awareness of the biosphere surrounding my home, and which is reflected in my art. I have planted and watched as the trees have grown to provide increasing cover, in turn increasing the bird life in the garden and encouraging the bees and other insects. My partner and I work steadily at keeping our little corner of the globe environmentally friendly as well as pleasing to the eye.

I suppose we are modest environmentalists, concentrating on what we can do individually to make steps to reverse the damage to the planet that population growth has caused. Many years ago, the Green party said the maximum sustainable population of the UK was about 31 million. We are now approaching 70 million and advances in science and industry have enabled food provision to remain abundant – so much so that millions of tons go to waste every year and the choices people have been able to make have resulted in an explosion of obesity, diabetes and a fall in life expectancy.

We watch in horror the demonstrators protesting what they perceive as a lack of action against climate change. They leave behind them evidence that they do not take personal responsibility for their actions – images of protesters pausing to buy fast foods, leaving tons of litter behind them including plastic packaging, plastic bottles, tents etc. horrify us. Stories of their leaders’ and many celebrity supporters use of unlicensed diesels, extravagant use of air travel, for personal pleasure abound. Celebrities curry favour to promote their own self-aggrandisement and are amongst the worst global polluters.

The gradual increase in tree cover in our garden over the years has been reflected in the morning imagery, as well as in a steady increase in bird life. The ash tree behind the studio has burgeoned, the pine in next doors garden has benefitted from a trim of wayward branches and their increasing green signals the arrival of spring. The line of sycamores in the school playground beyond has provided a backdrop, a stage backcloth to my little domestic scene. The central tree of this line has for some time been showing signs of distress, so it was no real surprise when a group of tree ‘surgeons’ started to cut it down. Imagine then my horror as they proceeded to continue working outwards from the centre taking down the whole row of trees. They may consider themselves surgeons but when they agree to fell healthy trees, they become hired assassins, butchers, in my book.

A piece of me died with the trees. In anguish I emailed the head asking why, why? His response was, quite frankly, risible and made me so angry. He said:
“The trees also caused a number of health and safety issues; moss growing on the near side of the key stage 2 playground was becoming a slip hazard, leaf fall combined with wet weather meant that we had to close the playground due to slip hazards, the leaf fall, seeds, aphids, sap etc has led to blocked guttering and damage to the school building and school equipment, we were also concerned that the roots would eventually encroach and cause damage to the fabric of the building and surrounding pathways; a number of dead branches were also spotted and were starting to drop – this was a concern with children playing underneath.

We deliberated for some time and came to the conclusion that in order to keep our children and school safe we needed to remove the trees.” 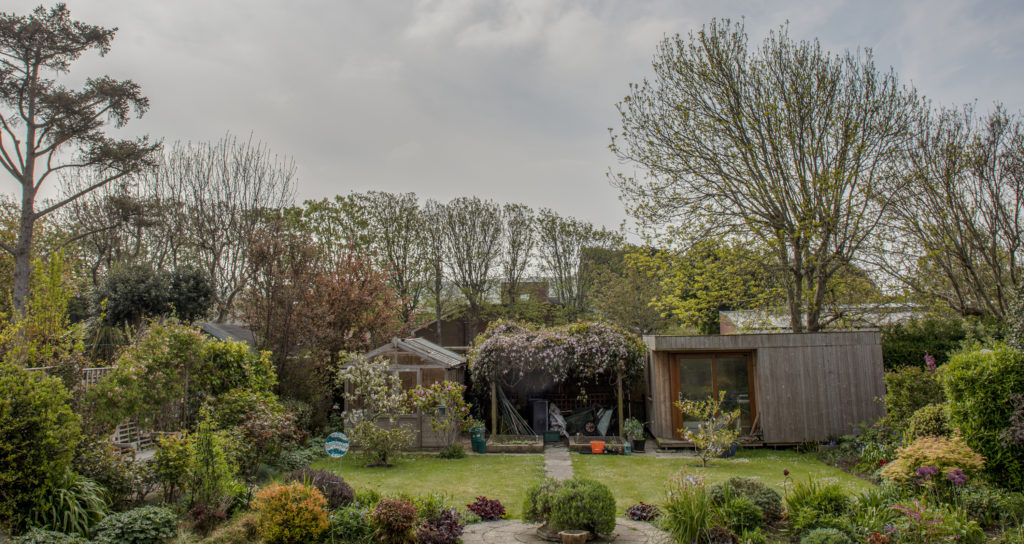 So because of falling leaves the trees had to come down. No more will the kids be able to delight in the sound of their shuffles through leaf piles, kicking leaves in the air, nor enjoy the colour of autumn leaves, the green sprouting signs of spring will be missed, the sounds of wind, the rattles of wind-blown bare branches – so many sensory stimuli removed, gone to keep their tarmac pristine. The bird and insect life too – where will the harshly calling crows and magpies perch, the starlings gather, pigeons roost, the woodpecker and squirrels go; no longer will the butterflies rise to sixty feet in the shelter from the sea breezes that the trees provided. Sources of musical and artistic inspiration were felled ‘for’ the children, their play impoverished.

I love the subtle changes in the garden the seasons bring, the variation of colour and sculptural form the trees brought to the vista. They are sorely missed, and a brave visit to me from the head did little to assuage my feelings. He has impoverished the world of the children and should draw them into a replanting and nurturing of new saplings, to restore the local biosphere so carelessly destroyed and to inculcate a love of nature. David Nash is quoted as saying:

Trees have a life cycle resembling
Our own. They grow and breathe
Through day and night and are awake
And asleep in turn through the seasons

The death of the trees is not the end of the story though. If you watch the cheap telly programmes showing New Zealand Immigration and Customs, you will see how vigorously those islands protect their environment from alien species. In Britain we have sloppy enforcement, or perhaps none at all? Like many government departments in other areas, those responsible for protecting our environment have been criminally negligent in allowing in infected specimens resulting in imported diseases killing our elm trees, the introduction of ash die-back and a new disease infecting oaks – England without oaks? The ash at the bottom of the garden may have ash die back already, and eventually follow the sycamores to woodchip, further damaging the environment and my personal biosphere.

More woes have followed from imports: foreign fuchsias have brought with them gall mite infection which is now destroying these garden plants. So often a source of my paintings, all across the Channel Islands and Southern England, now including the fuchsias in my own garden, these plants are dying. The images here show how they destroy the flower buds on the plants. There is only one solution according to the RHS, and that is to dig them up and dispose of them. The first dug out is in the garden waste bin, others cut down to ground level in the hope a really hard winter will save them by killing the mites.

I will find alternative plantings for the fuchsias; the ash will stay until truly dead as I cannot image the nudity of my skyline without it. The gap left by the sycamores reminds me every day how protecting our planet is the responsibility of each of us. It is no good Extinction Rebellion railing about the inactivity of government if they drive rather than walking their kids to school and don’t monitor the school’s environmental policies. No good the head talking about a school garden if he is prepared to kill these mature giant sycamores.

Responsibility for the planet rests with all of us. Stop using plastic bottles – refill a reusable bottle with tap water (places like Fiji that sold water rights to multinationals are now running short of water themselves). Buy fresh food where you can – it is more likely to be local and have low transport miles. Check labels and buy fresh and local at every opportunity. Never use plastic bags, take your canvas own along. Avoid plastic packaging.

I will continue my daily photographic record of weather and environmental change where I live. I will continue to enjoy the seasonal changes. I have some rules now for me – if I buy new clothes then for each new item an old one goes from my wardrobe either to a charity or for use as rags. Despite my partner saying I am too old to be doing the work, this year we have grown apples, tomatoes, gooseberries, rhubarb, courgettes ( a failure this year), lettuces and as the apple trees mature and start cropping well we are for the first time using the storage racks we got locally, second hand, to store those we don’t freeze. My partner cooks fresh (today blackberries from Seaford Head and our own apples for a crumble) – partly for our health (see how I beat diabetes) but partly because we enjoy flavours unadulterated by sugar or loads of salt.

Gall mites – the signs to look for on your fuchsias include dead brown areas at the flower buds. pesticides don’t work, it spread via birds, insects and the wind and is becoming endemic in the South East

To those demonstrators who littered tons of rubbish on London streets as ‘environmental protest’ I say shame on you, don’t expect government’s magic wand to absolve you of responsibility. You littering hypocrites – your penance should be to collect an amount of rubbish from hedgerows and beaches where you live equal to that you dumped on our streets. Look hard at how you use our world. Change will only come from all of us making individual changes. Government has already made significant alteration to our national emission pattern but really, most of it now is down to you and me.

I do miss those trees…